The first Cybathlon pushed the limits of bionic technology

Andre van Rüschen slowly climbed a five-step ramp at the end of his race. With a black processor strapped to his back and leg supports on either side of his lower limbs, he stayed focused on the body-machine coordination that was keeping him upright. He had walked over a wooden slope, criss-crossed bright yellow bars and tried to step on gray discs that were placed irregularly on the floor. Now, standing atop the last obstacle in the exoskeleton race, he took a moment to pause and look up at his opponent on the adjacent track. They were both on the ramp, going head-to-head at the world’s first Cybathlon, a sporting competition designed for people with severe disabilities.

The crowd inside the Swiss Arena in Zürich cheered them on. Van Rüschen, the German pilot who was using a ReWalk exoskeleton, quickly regained his focus and prepared to walk down the next five steps to complete the race. He hit a button on the remote around his wrist to change the settings from “walk” to “climb” and quickly adjusted his upper body to balance his weight on the crutches in his hands. With his competitor, Mark Daniel, right on his heels, he leaned forward to pick up the pace.

Moments later, the crowd roared as van Rüschen walked over the finish line, seconds ahead of Daniel. He became the first pilot in a powered-exoskeleton suit to win the gold medal at the Cybathlon. Daniel, who presented the exoskeleton technology from Florida-based Institute for Human and Machine Cognition, went home with the silver. 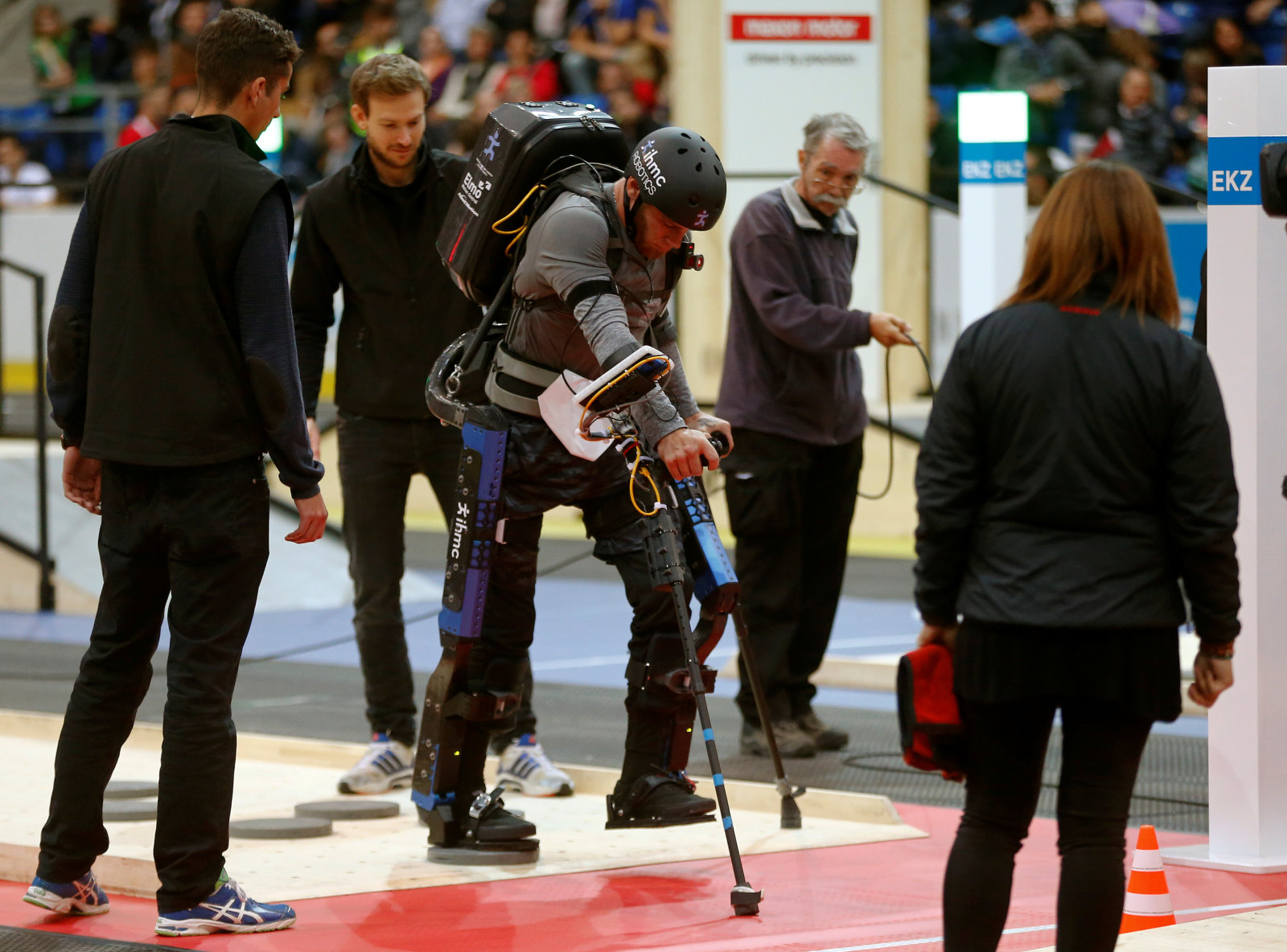 Through the day, on Oct. 8th, there were many moments of triumph and tears. Of the 66 competing teams, most machines carried the pilots through the obstacles without a glitch, while some struggled to get past the first leg of the race. Spectators in the soldout stadium leapt out of their seats to support the pilots who won and cheered for those who failed to conquer their obstacles.

“It showed that it’s possible to use technology at an event to bring people without disabilities closer [to] people with disabilities,” said Robert Riener, the principal organizer of the competition. “It was about starting a conversation, to have awareness about disabilities, to include all people.”

The Cybathlon created a space for people to support each other irrespective of their abilities. But the impact went beyond the ambiance in the arena. The purpose of the competition was to push the field of bionic-assistive technology to do more for the people who need it. Each obstacle was carefully planned not only to put existing technologies to the test, but to encourage novel ideas.

Powered-wheelchair prototypes were built to roll up a flight of stairs or move across uneven surfaces without getting stuck. Arm prosthetics that can rotate and grip were tested for smaller gestures, such as screwing in a lightbulb or spreading jam on a slice of bread. And a unique brain-computer interface race had teams engineer a way for paraplegic pilots to control an avatar in a computer game through their thoughts alone. 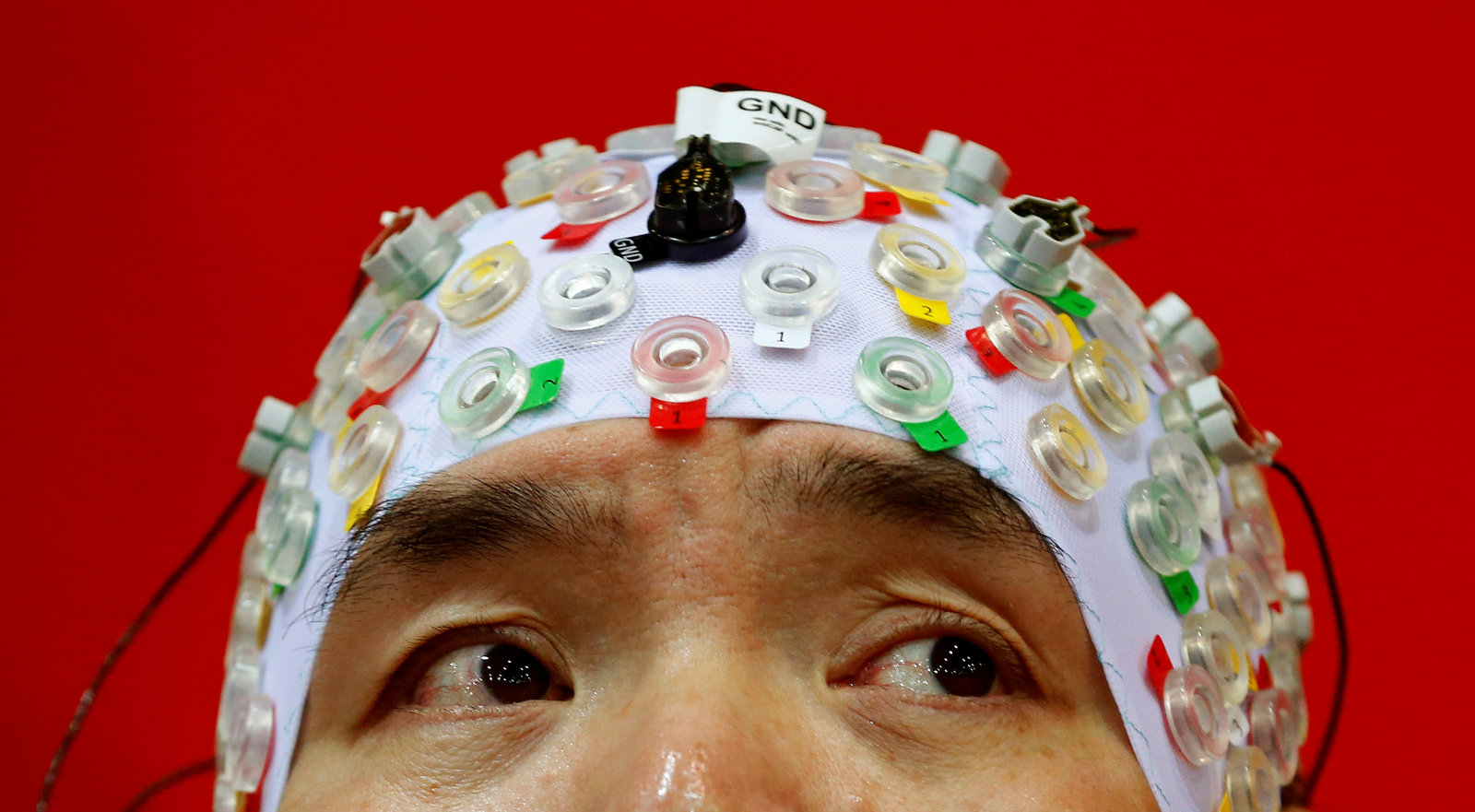 The event, organized by ETH Zurich, was the first of its kind to invite engineers and developers to bring their technologies to a global stage. In order to host an accident-free competition, the Swiss university planned for thorough tech checks and medical evaluations. While most teams made it past preliminary testing, a few machines failed to meet the technical safety requirements and were disqualified. A handful of pilots also had to be turned away for medical discrepancies.

Michael McClellan, the American pilot slated to represent Team Cleveland’s unique implanted-sensor technology in the Functional Electrical Stimulation bike race, had spent the last year training for the Cybathlon. Paralyzed from the waist down, he was eager to compete for the clinical-research team that had enabled him to get back on his feet and ride a bike again. But the medical check in Zurich revealed that he still had some muscle activity in his leg. Minimal as the movement was, it kept him out of the race. Mark Muhn, the team’s reserve pilot and McClellan’s close friend, who showed no signs of voluntary muscle activity in his lower body during the test was asked to get in the bike for the final race.

The moment was as unexpected for Muhn as it was bittersweet. He had to take his friend’s spot, but he had also spent months training for the remote possibility of racing. The next day at the arena, two rounds and 20 laps later, Muhn went on to the win the gold, with his wife and McClellan cheering in the crowd. None of the other 10 teams came close to his time in the race.

“It was about starting a conversation, to have awareness about disabilities, to include all people.” – Robert Riener

Throughout the day, unexpected wins rolled in with predictable results. The group from Ossur, a leading Icelandic company that manufactures lower-limb prostheses, entered the leg race with four pilots who were favored to win. Three participants used a variation of the company’s commercially available knee technologies, while the fourth, Lukas Kalemba, piloted a prototype of a powered leg built specifically for the event.

Kalemba stumbled on his last obstacle as he carried a bunch of objects up the stairs on a ramp and didn’t make it to the finals. But the remaining three Ossur pilots outraced the competition to win all three medals in the powered-leg discipline.

The event showcased the power of commercially established devices, but it was some of the simpler technologies that took a surprising lead. In the arm-prosthetics race, 10 teams covered the spectrum of assistive devices available to amputees today. Powered arms from Touch Bionics, a leading Scottish company that manufactures upper-limb prostheses, and the more experimental implanted prosthesis from Swedish team OPRA were front-runners in the race. But the Dutch pilot from DIPO Power won the gold with a body-powered prostheses that harnesses the physical strength of the wearer instead of relying fully on a machine.

“What we saw is that it doesn’t need to be the most complex technology to do the best performance,” says Riener. “We had teams do extremely well with passive devices. It didn’t need to be high-tech. It can be more robust and reliable.”

The juxtaposition of experimental prototypes from research labs and commercially successful devices from large companies made the Cybathlon a showcase of what’s available and what’s possible in the field of bionic technologies. The event also pushed both sides to do more for people with disabilities. Exoskeleton companies adjusted their software to make stepping easier for paraplegics and novel sensors were implanted in some of the pilots to create direct communication between their bodies and the machines.

The differences between teams that dominated and those that struggled to make it through also sparked collaborative possibilities.

“A big take-away is that there will be opportunities to develop and create platforms or tools that can support universities in pursuing research in powered prosthetics,” said David Langlois, the technical lead from Ossur. “A lot of the other guys we saw don’t have corporate support, their resources are limited and development is slow. They’re spending a lot of time doing what we already do. I would like to consider how we can share resources so everyone can be more efficient at contributing and moving the field of prosthetics forward.”

The state of prosthetic devices already stood apart through the competition. While exoskeletons still looked too bulky and pilots in the FES bike race were visibly exhausted, most of the participants in the leg-prosthetics discipline ran over the obstacles in less than a couple of minutes. “It’s a much more mature technology,” says Langlois. “It’s been available for a long time, a lot of research has been dedicated to it. Other events are more about newer technologies that haven’t reached the same level of maturity. It leads to a very different execution of the challenge.” 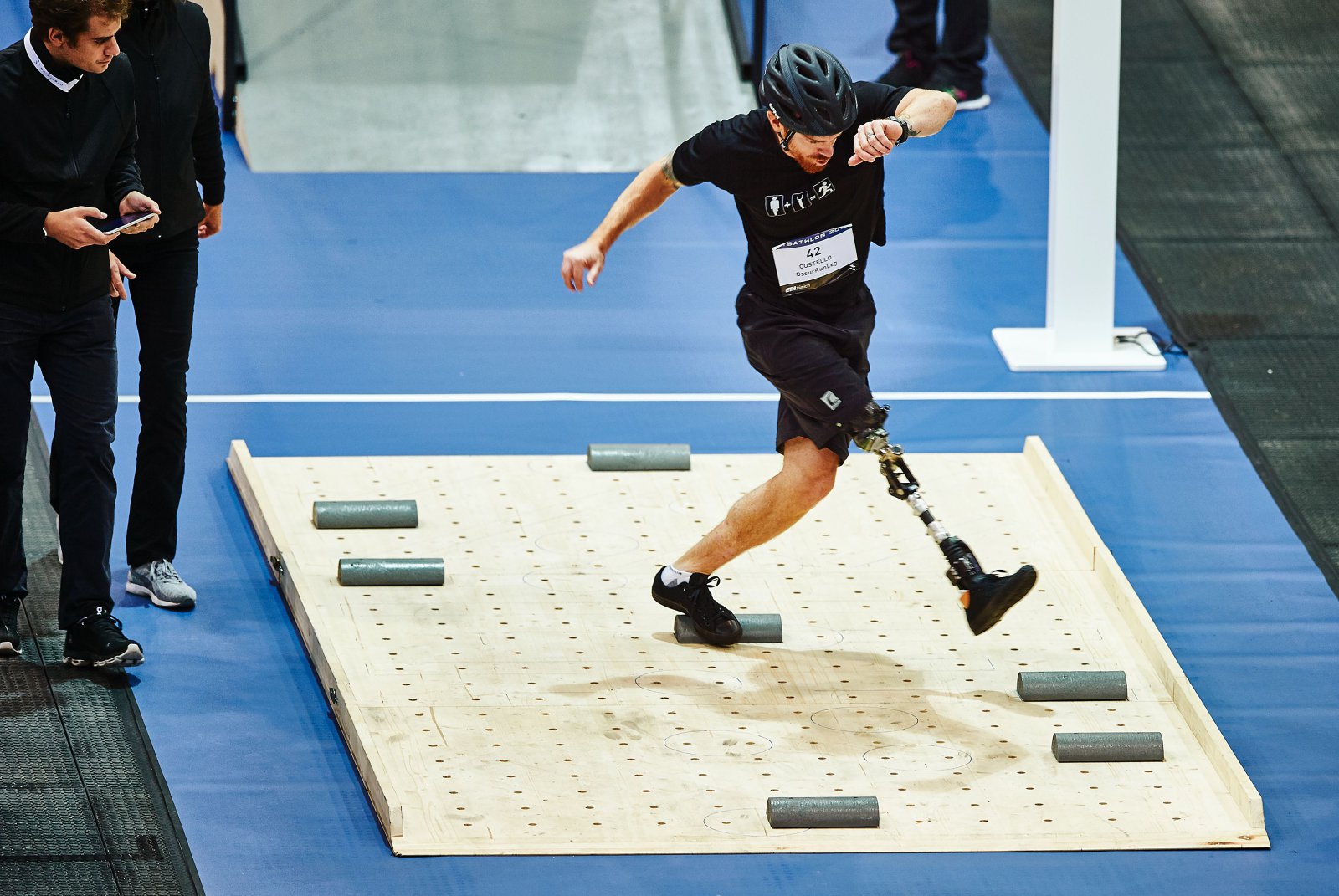 The selection of obstacles also contributed to the pace of the leg race. The available prostheses, according to Langlois, already enable amputees to walk across different surfaces or carry out everyday tasks like carrying objects across a room. But it’s particularly challenging for them to get through a regular work day on the prosthetic leg. Long stretches create a lot of discomfort and even pain for most users.

“Real life is not a one-minute race,” says Langlois. “It’s a 12-hour day for normal living. It was hard to see the daily life challenges of amputees [on the obstacle course],” he says. “Not that this track was easy or had no value but to level the field to have events that have the same level of difficulty, some adjustments would help bring out the challenges of being a lower leg amputee.”

The need for adjustments, however, is not lost on the organizers as they assess the impact of their event. Riener plans to make changes to the tasks — making some less intensive, others more challenging — for the next Cybathlon in four years.

“We’ll continue to speak with the community to improve the racetracks for daily life challenges,” he says. “It’s our responsibility to keep this movement going now. We can improve inclusion and have better technologies for people with disabilities. We have the momentum now.”

This is the final episode in a five-part video series called Superhumans, which follows the Cybathlon from start to finish.

Read more from News
News
← NBA will livestream weekly games in VR this season
Did Trump pilot a TV service during the debate? →