The Mail app didn’t get the overhaul that Messages did with iOS 10, but it still received an update with a few changes that might be tripping you and your inbox up. If you are less than thrilled with Mail after making the move to iOS 10, these two fixes might help.

When I first updated to iOS 10, my Mail app looked like it was displaying a desktop version of emails. The main view of my inbox looked normal with the usual font size for senders’ names and subject lines. When I opened any email message, however, the text was so small I could barely read it. I had to pinch to zoom in order to make it legible, but that meant I had to swipe side to side to read to the end of each line and then the start of the next.

Weird, because the font size significantly increased in other parts of iOS 10, including Apple’s redesigned Music and News apps.

I experienced this tiny-font issue on my iPhone 7 Plus, but it was not evident on my wife’s iPhone 6S, so your mileage and font size my vary. (Judging from AppleSupportforums, however, I’m not the only one who was struggling to read the Mail app’s tiny font after updating to iOS 10).

The fix: If the Mail app displays tiny text for you, the fix is easy: simply restart the Mail app by double tapping on the Home button and swiping up on the Mail app to quit out of it. When you open the Mail app again, the font size should be much larger and legible without the need to zoom.

You can tap that blue-arrow button to view the subject lines of all the emails in a thread without leaving the main view of your inbox. It’s a convenient way to locate a specific email in a thread. The messages in this expanded view are ordered so that the most recent message is at the top. 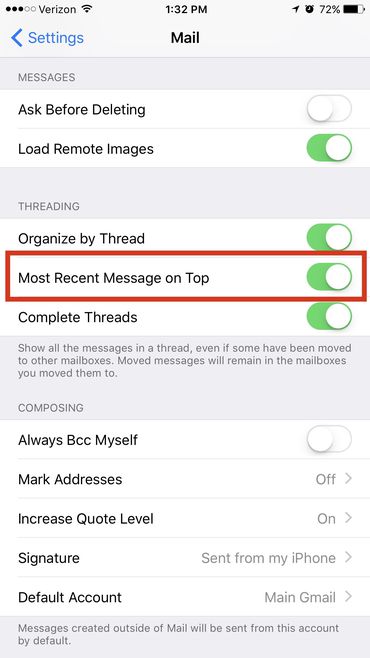 The fix: There is a setting that reverses the order of threaded conversations. Go to Settings > Mail and tap to turn on the toggle switch for Most Recent Message on Top. With this setting enabled, you are taken to the most recent message in a threaded conversation and then can scroll down to read the previous messages in the thread.

For more, check out our complete guide to iOS 10.