Dropbox isn’t a company that makes flashy, high-profile changes to its products. Instead, they’re all about refinement, making small changes over time that end up making things faster and easier for customers. That’s happening today with the Dropbox iOS app: the company is rolling out five new features, with another important one, iPad split-screen multitasking, coming soon. None of the new features are groundbreaking on their own, but they take advantage of some new iOS 10 features and add up to a Dropbox experience that makes it easier for the company’s customers to Get Things Done.

First up is the ability to add your signature to PDFs stored in Dropbox — you can drop a text field anywhere in a document that you want to type in, and you can also open up a window to trace your signature on your device’s touchscreen. Much like the document scanning feature Dropbox added in June, this isn’t something you’ll use every day, but it could be a lifesaver when you need it. It’s certainly a lot easier than printing out, signing, scanning and then emailing a document like a lease or school permission slip. I’ve done that dance far too often lately and would be happy to try Dropbox’s workflow. 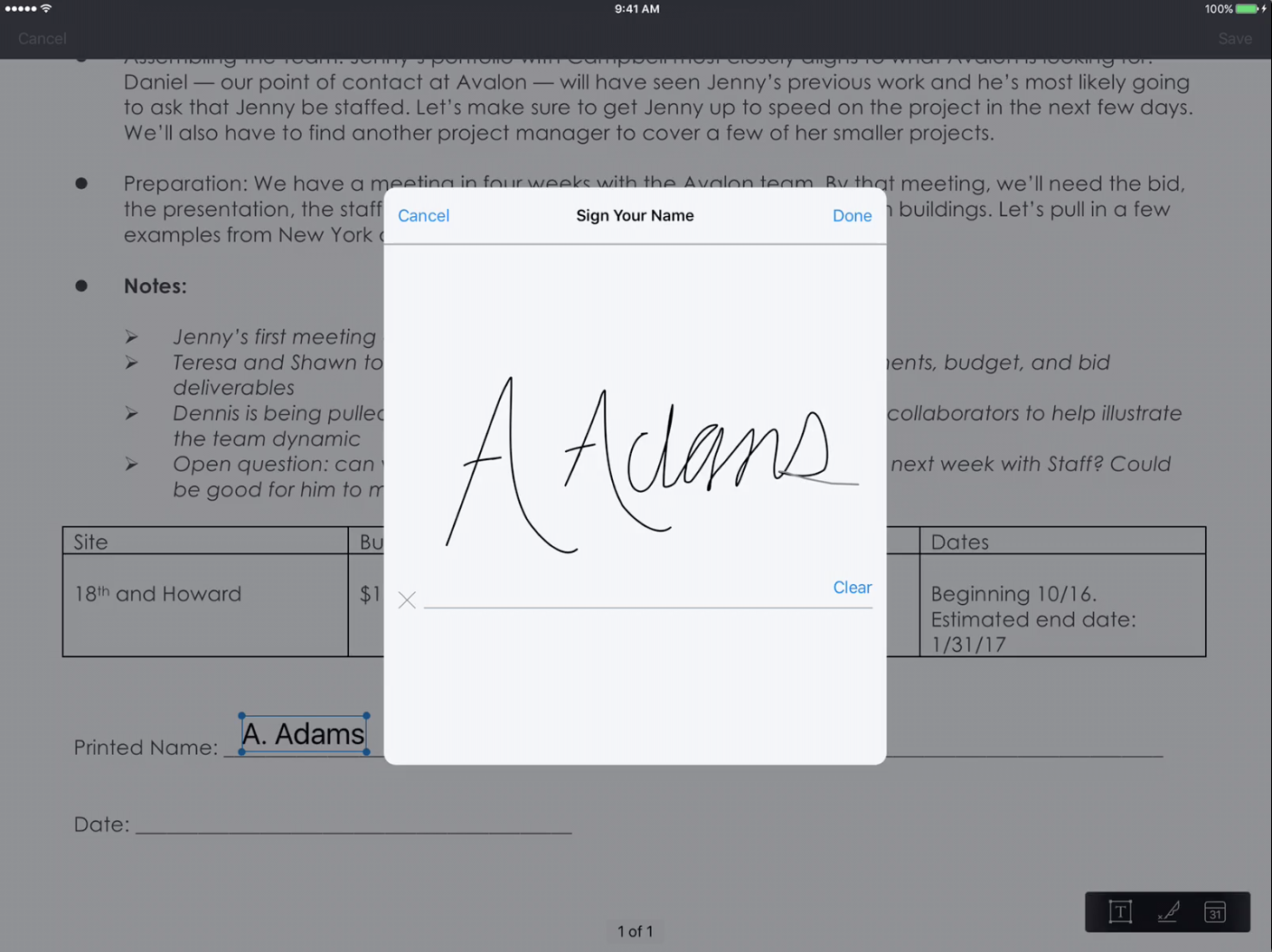 The next set of new features relies on iOS 10’s new capabilities. You can now share files through iMessage — the app shows up in the iMessage app area, and tapping it brings up a list of your most recent files. When you send them through iMessage, the recipient will get a little preview of the document. That’s an improvement on how things worked before; you could send files through iMessage by using the share panel inside the Dropbox app, but the recipient would only get an unwieldy link, with no info on what the file they were going to receive was.

Dropbox’s “today” screen widget is also more useful now. Instead of just showing a list of your recently edited files, there are three shortcuts that let you scan a document, upload a photo or create a new Microsoft Office file. The scanner shortcut seems particularly useful; a swipe and a tap will let you capture that receipt you need for expenses before you forget about it and lose it forever.

There’s also a new version control feature for mobile: if you’re in a shared file, you’ll receive a little notification if someone else has made changes to the document. You can then just tap to refresh and see what’s changed. Given that staying in sync across shared documents remains one of the trickiest things to do, this is a most welcome change — although we don’t imagine that most people do so much work on their phones that they’ll need to be alerted of changes in real time. It’s still helpful for those doing a lot of work on their mobile devices, though.

The last few updates are for the iPad. If you’re watching a video stored in your Dropbox, you can now view it in the picture-in-picture mode Apple added to iOS 9 last year. The other, more useful update is “coming soon” — that’s full split-screen support. That’s one of the most important things a good iPad app can offer at this point, and it’s a little surprising that it took Dropbox a year to get there. But if you have documents stored in Dropbox that you want to keep an eye on while writing or browsing the web or doing anything else, this feature will finally make that possible. 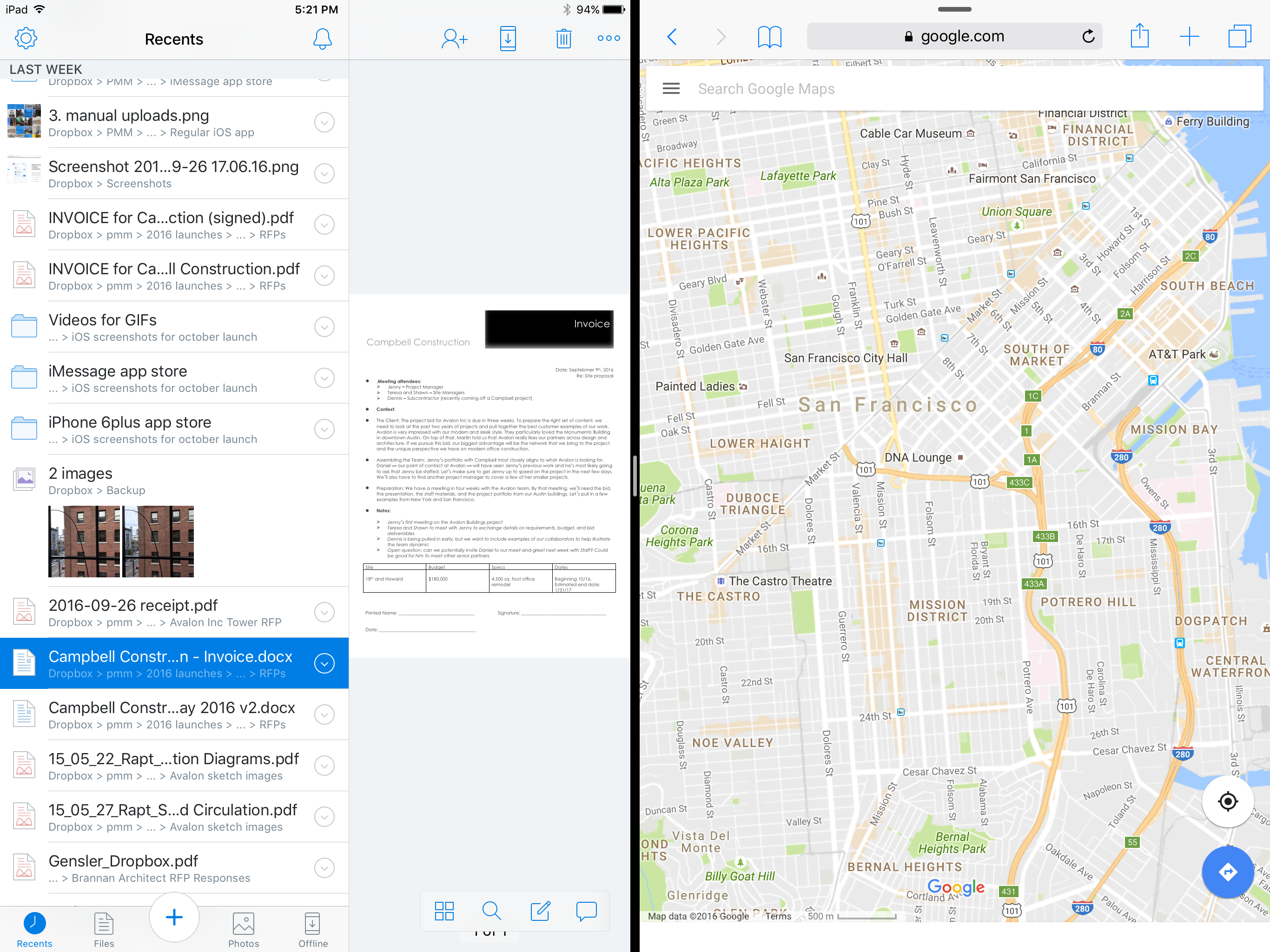 Matt Pan from Dropbox told me that these features were the latest efforts to both bring the full desktop functionality of the program to mobile as well as continue the company’s mission to offer its tools to users inside software they’re already using. That latter case is what Dropbox is doing with iMessage and what it has already done with Microsoft Office. Not everyone will automatically find a use for each new tool — but if you use Dropbox, probably at least one of these new features will be handy, and it’s entirely possible you’ll find a few others come in handy down the line. The update rolls out for iPhone and iPad today, and split-screen view on the iPad will arrive “in the coming weeks.”