Should you upgrade to the Google Pixel from the Nexus 5X? 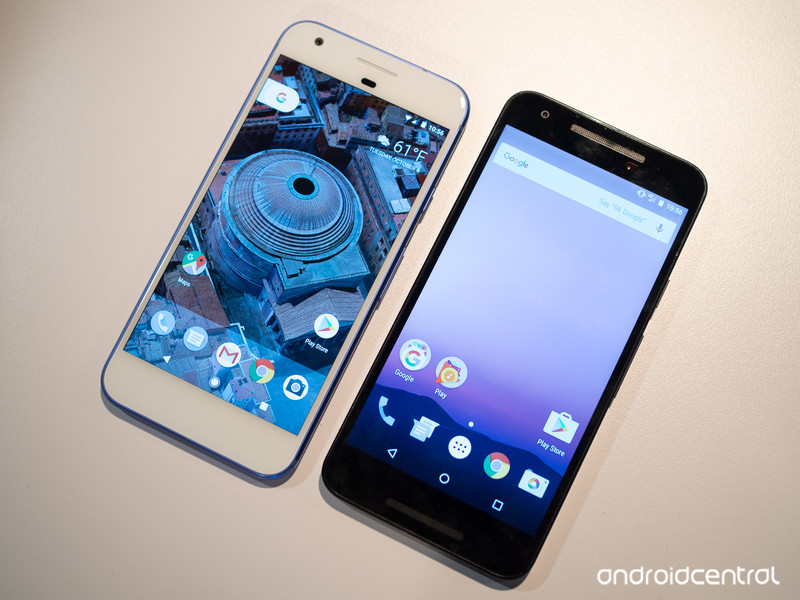 There’s a ton of hype surrounding Google’s new Pixel, but should you upgrade from last year’s Nexus 5X?

If you picked up the Nexus 5X last year, you were likely swayed by one reason or another — appreciation for a smaller size screen versus the Nexus 6P, or simply nostalgia for its Nexus 5 predecessor. You might also enjoy the soft-touch plastic backing which helps you maintain your grip. However, if your experience actually using the phone on a daily basis has been anywhere similar to that of the AC writers who gave their thoughts on the Nexus 5X three months on, you may share their common complaints about inconsistent performance, limited storage space and some questionable moments when using the camera.

But it’s a new year, and that means a new phone launch from Google. Unless you’ve been living under a rock, you know the Nexus name has been replaced by Google’s new Pixel line up. Assuming you’re interested in upgrading to a phone around the same size as the Nexus 5X, should you get the Pixel to replace it? Let’s explore.

As you would expect given the pricing and its late-2016 release, the Pixel offers better specs in nearly every category, and continues that into the overall build quality. The Pixel features an aluminum unibody build with Gorilla Glass 4 on the front, and a panel of glass along the top one-third of the back where the camera, LED flash and fingerprint sensor reside. Compared to the plastic featured in the Nexus 5X build, the Pixel resides in a completely different class. While some may like that the Nexus 5X bucked the trend of an aluminum unibody design as found on the Nexus 6P, there’s simply no denying how slick and cool the Pixel is — plus it’s also available in three distinct color styles.

The Pixel’s hardware and specs reside in a completely different class.

Internally, with the Pixel you get a Snapdragon 821 processor and 4GB of RAM to ensure everything runs smoothly. The Pixel’s 5-inch screen is slightly smaller than the 5.2-inch screen found on the Nexus 5X, which means you’ll enjoy better pixel density for a crisper viewing experience. When it comes to the camera Google is making a lot of bold claims, and though the hardware is very similar to the Nexus 5X the big change here is going to be overall camera performance and that’s a big deal.

Each Pixel will ship running the latest version of Android, version 7.1. The Nexus 5X was one of the first phones to receive the Nougat update, so chances are you’ve already updated your Nexus to the latest OS.

However, as we’ve reported earlier there are a number of new features that will remain Pixel exclusives for the forseeable future. This includes the revamped Pixel Launcher. The Pixel and Pixel XL will be the first phones to ship will Google Assistant, which may well prove to be a real gamechanger in the way we interact and use our phones. Pixel users will also get free, unlimited original-quality cloud backup for all your photos and videos via the Google Photos app — and that includes 4K video. And the Pixel phones are the first to be specifically designed and shipped with Google’s Daydream VR platform.

The experience on the Pixel won’t be too far removed from the Nexus 5X, but there are enough new features here that you may be taking an extra look.

The Pixel is the first phone “Made by Google,” and by all accounts will be an amazing device with awesome specs and cool new features you’ll want to check out. But on the flip side of all that hype, the Pixel is not cheap. Starting at $649 for the 32GB version and getting as high as $849 if you upgrade to the 128GB of storage and get Google’s device protection, the Pixel line up is significantly more expensive than what you paid for your Nexus 5X.

This might price out a portion of the Nexus fan base, but if you’re still rocking the Nexus 5X and aren’t scared off by the steep price of the Pixel, then it’s definitely worthy of your attention, and your hard-earned dollars.

Read more from News
News
← Polar M600 review: Top-notch smartwatch and fitness tracker fusion
SmartOmi Convertible wireless/wired earbuds: You can enjoy the best of both worlds with these hybrids (review) →