Lightseekers brings your video game into the real world

Action figures can look a little staid next to video games where your character can walk, talk and fire all manner of weaponry. But there’s still something special about the tactile experience of holding a cool character in your hand, which is why we’ve seen game developers embrace the world of toys with products like Skylanders, Amiibo and LEGO Dimensions. But, while placing a figure on a base can unlock characters or entire worlds, the interaction between game and toy tends to end there. Lightseekers, launching today on Kickstarter, changes that dynamic by making its action figures a living (and almost breathing) part of its games.

Lightseekers, in some ways, is almost reminiscent of the film Small Soldiers. Except the toys don’t actually move and they definitely don’t try to kill anyone (we hope). They’re fully articulated and will light up and talk in response to the game. Instead of using NFC like many other toys-to-life titles, the figures communicate with the Lightseekers game via low-power Bluetooth, essentially creating an ongoing dialogue between the two.

The program will detect the presence of a figure and allow you to “claim” it in-game, so you can control the character in an action RPG that has you exploring the magical world of Tantos, collecting items and battling against the evil Umbron. Characters level up as you play, with the data stored on the figurine. There’s also a special “lending” feature that will let your friends borrow the character for a while, but ultimately the figure and all its associated in-game data belongs to you.

Though it’s being crowdfunded, Lightseekers is actually a collaboration by game developer PlayFusion and toy manufacturer Tomy. PlayFusion is a relatively new company, but several employees, including CEO Mark Gerhard, worked on the long-running MMORPG RuneScape. Instead of limiting their expertise to just PC and Mac, the Lightseekers game will also be available for iOS and Android — a departure from many other toy-to-life games, which are typically designed for consoles like Xbox, PlayStation and Wii U (Skylanders is available for iOS). It means more people will be able to play the game, since most families own a mobile device of some sort.

The game mechanics are specifically designed toward being touch-friendly and accessible for all ages. There are no tight turns or small platforms that would require the use of a more precise directional pad or physical joystick, and the characters can act independently so beginners and younger players needn’t worry about being fast enough. Special attacks and items can be used, however, so more experienced players still have opportunities to employ some strategy. 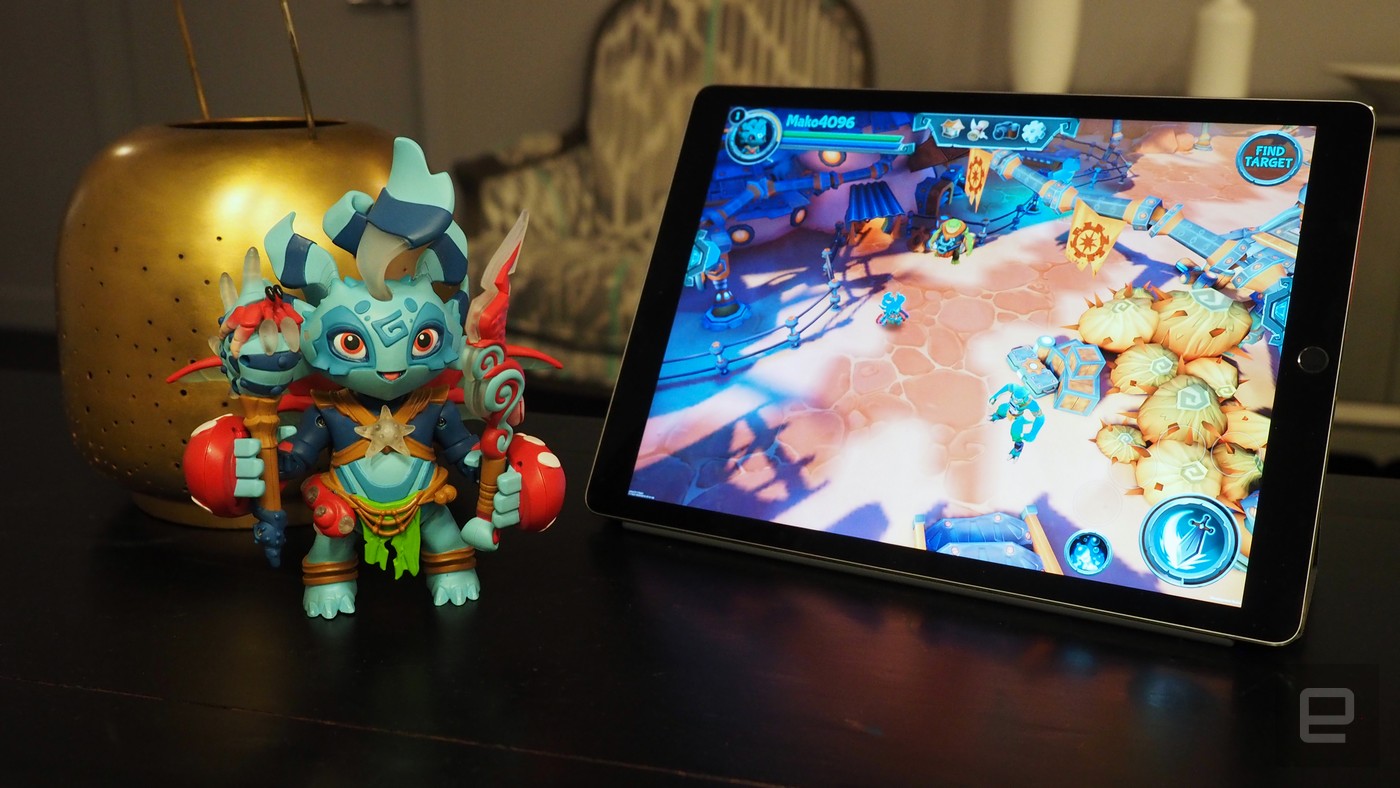 While the game works just fine on its own, the figures are the only way to unlock its full potential. If you place a toy weapon in the hand of your action figure, that weapon will immediately appear in the game with a bit of fanfare. A few in-game items will be exclusive to the action figures, such as a jetpack that lets your character hover around. This backpack isn’t just there for decoration: It unlocks a mini-game where you race an NPC in the air while collecting coins. Thanks to a built-in accelerometer, the action figure is the controller — you have to “fly” it in your hand, waving and rocking the toy in the direction you want your avatar to go.

The figures are designed to interact with the real world as much as possible. In addition to detecting when your phone or tablet is nearby, they know when other figures are around and react to those too. If Toy Story 2 broke your heart with Jesse’s story of neglect and abandonment by her original owner, Lightseekers addresses that kind of treatment directly: The figures activate when you pick them up, and comment if it’s been a while. It’s all in jest but, let’s face it, you’re going to feel a little bad. I’m glad that none of my Animal Crossing Amiibo can do this, because it’s been years since I last played and I don’t want to be reminded of all the unwatered flowers and unpicked weeds that are waiting in my village.

Like Animal Crossing, Lightseekers also makes use of special cards to add content to the game. Instead of the old-school barcode cards from the GameCube era or the current NFC Amiibo cards on the 3DS, Lightseekers uses augmented reality. Just place the card on the table and point your phone or tablet’s camera at it and the character or item will pop out and join your game.

When you’re done playing video games, the cards are part of a collectable card game that’s fully playable on its own without the mobile app or the action figures. The Lightseekers universe will also expand into other media, including an animated TV program. The current plan is to have the figures react to key scenes in it. PlayFusion is currently working on its own software that can identify TV shows and movies by their audio patterns faster and with fewer problems than existing apps like Shazam. The current demo features a dinner scene from the Hobbit. When Ori says, “I don’t like green food,” one of the Lightseeker figures lights up — even with people talking loudly in the room.

Before Lightseekers can take over your kid’s playroom or your office, they have a Kickstarter to conquer first. Fifty bucks will snag you a Mari or Tyrax figure, a weapon and a handful of AR cards, along with a slew of in-game perks. One hundred and fifty dollars nets both figures plus extra weapons, while players who are champing at the bit to enter the world of Tantos might opt for the $300 tier, which gets you into the physical beta. Of course, if all of these are too rich for your blood, the game will be free to play on Android and iOS starting early next year.