Running can be a pretty lonely sport, but you may soon get a companion that’s always ready to go. Oakley and Intel teamed up to create a sunglasses-with-smart-earbuds hybrid that will tell you how you’re doing during your run or bike ride. The Oakley Radar Pace will be available on October 1st for $449. I tried out a preview unit and, even though I’m not a serious runner, I’m actually really excited about what the device can do.

I had a love/hate relationship with my former personal trainer, but it was always great to have someone to turn to for feedback on how I was performing. That coaching is the biggest draw of the Pace system. It monitors your distance traveled by tapping into your phone’s GPS and studies your heart rate if you’re wearing a third-party Bluetooth-enabled monitor. Oakley says this feature “will work with any Bluetooth enabled smartwatch or fitness tracker with a heart rate monitor.”

The Radar Pace has what Intel and Oakley call a dual-initiative system, which, in layman’s terms, means that either you or the device can start a conversation. You can ask the Pace how you’re doing, or it can tell you, without any prompts and after some time, how to improve your progress. And in case you interrupt each other, the Pace will cache your questions while it’s speaking, and get back to you after it finishes what it had to say. 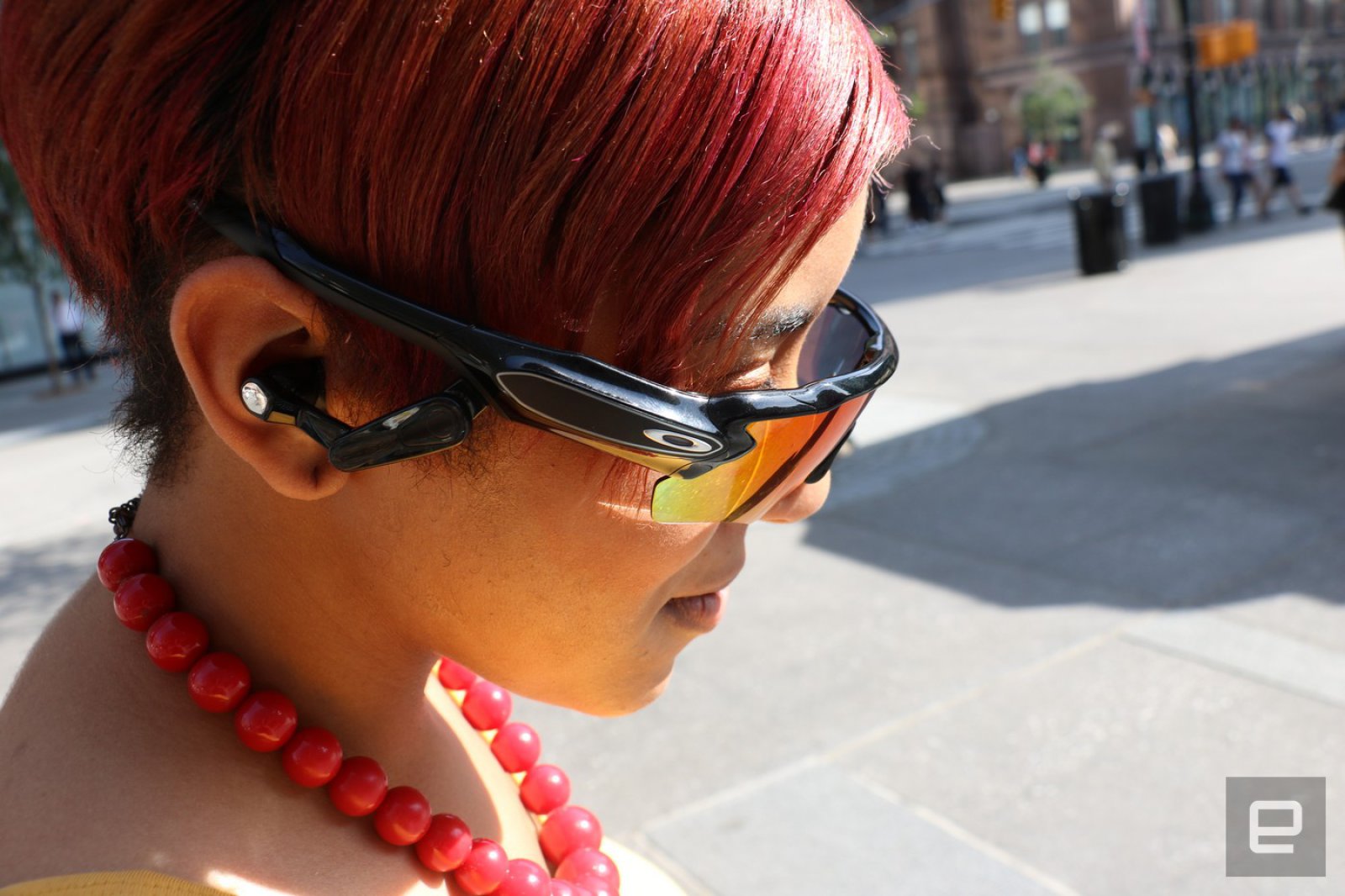 During my demo, Oakley’s rep asked a slew of questions about his pace and cadence while running on a treadmill. The device told him that his stride rate was 85, and then, when he asked how good that was, it told him he needed to speed up and hit 88. All this in a calm, Siri-like voice that, let’s be real, isn’t nearly as motivating as a gruff, buff trainer yelling, “FASTER!” Still, it’s nice to know how you’re doing as you’re running so you can correct your technique during the workout rather than try to fix it afterwards.

Once you’re done, you can tell the Pace to end the workout, and if you haven’t completed the session it designed for you through the companion app (for iOS and Android), it will ask you, tentatively, if you really want to give up (you weakling, you). Through the app, you can create workouts, monitor your heart, cadence, distance and pace history and overlay graphs of each on top of each other. The interface I saw seemed dead-simple, and appeared to have tons of information that avid runners would find useful. Novices like myself will probably be more taken by the glasses themselves, which meet IPx5 standards for resistance against rain, sweat and some splashes.

The lightweight shades don’t have a lot of components onboard. The team didn’t try to squeeze a GPS or heart rate sensors on the Pace, which helped it achieve a 56-gram weight. All it is is the existing Oakley Radar shades with a little micro-USB port on each arm. On the glasses are a touch panel on the left for music playback and Siri control, a three-mic array that Oakley says is optimized to hear you even with wind whipping by at top speed, as well as an embedded system that’s the brains of the Pace. There’s also a battery that will last four hours with continuous music playback and six hours without.

You’ll have to plug in the included earbuds, which can be bent to fit in your ear or stick out parallel to the frame when you don’t need them. During my brief time with them, the ‘buds felt like they were firmly attached to the sunglasses. 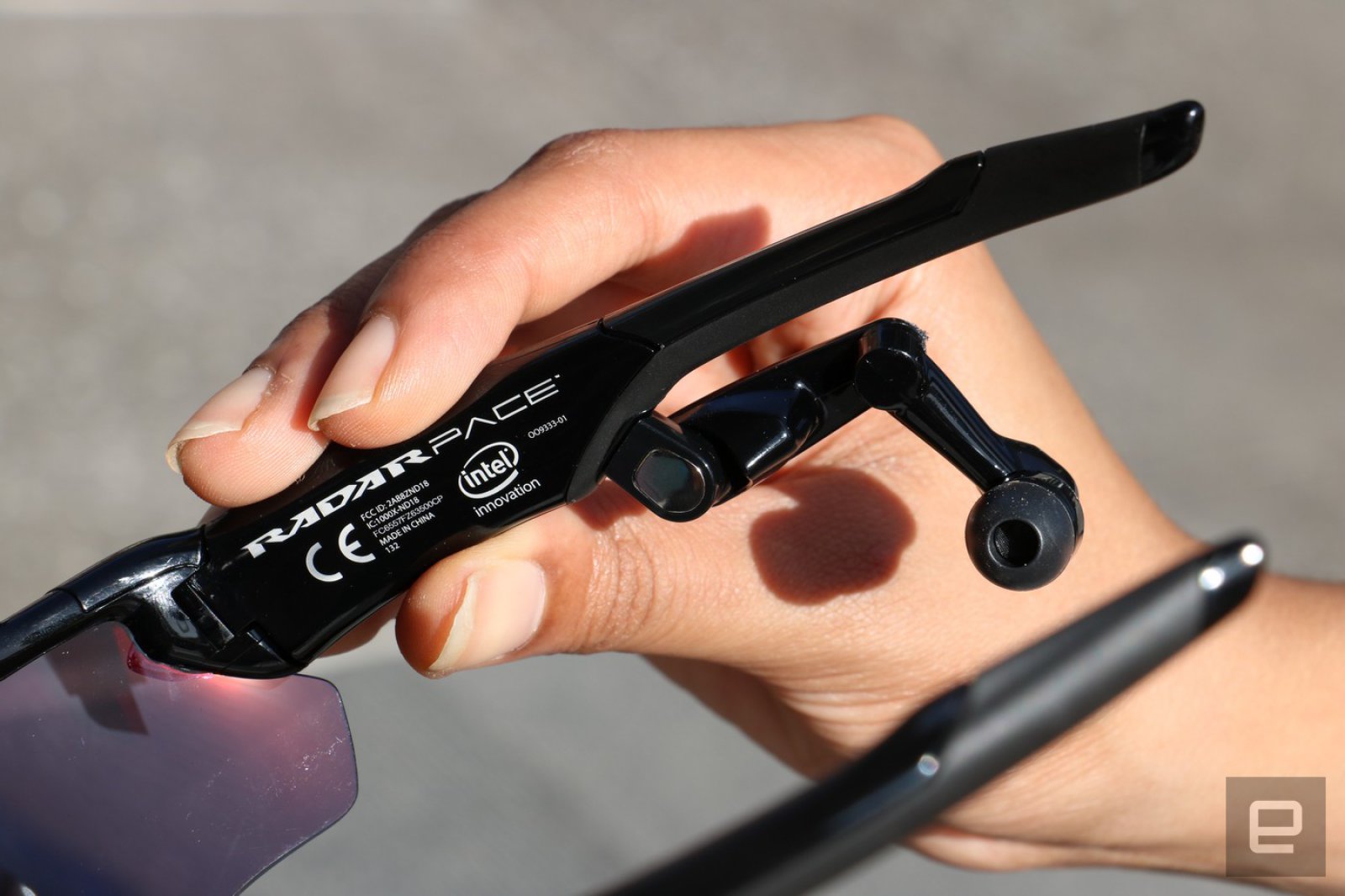 I tried on the Radar Pace and it fit snugly on my relatively wide-set face, but was still light and comfortable. Oakley doesn’t yet offer different sizes for the Pace, but said it may do so in future. I had some trouble trying to put the frames on my face, since I had to keep the earbuds from folding out in the process, but once I figured out what was happening it wasn’t difficult to handle.

Oakley isn’t the first to bring fitness tech to your ears. Samsung, SMS Audio and Bragi are just three of the more notable companies working on earphones with heart rate monitors. Although it doesn’t use Intel’s heart rate tracking earbud technology, the Radar Pace is the first to introduce something similar to sunglasses. And while I balked at the $449 price tag (twice the average $220 price of Oakley’s existing non-tech Radar shades), the device itself is pretty unique. It appeals to a niche market of hardcore fitness enthusiasts willing to shell out for fancy gear, but I can see the Pace taking off and gaining widespread appeal if it adds more features and comes down in price. In the meantime, though, this is a wearable that hardcore joggers will likely love.