The last time we saw a new Desire phone, HTC had basically speckled it with paint in the name of fashion. We can’t blame them — the effect was pretty damned cool — but now the company is trying something a little different with the new Desire 10 Lifestyle and Pro. HTC’s midrange work is getting wrapped up in a classy new look, and (spoiler alert) it’s a pretty impressive change. The Lifestyle is set to hit certain markets this month, ahead of the more expensive Pro model in November, and we got to take a closer look at both of them just a little while ago.

As you’ve easily deduced, the Pro is the more powerful of the Desire 10 twins. That’s mostly thanks to the octa-core MediaTek Helio P10, assisted by either 3GB or 4GB of RAM; the former model comes with 32GB of storage, down from the latter’s 64GB. Plenty of power to render things on the 5.5-inch 1080p IPS LCD screen and keep it all moving at a respectable clip, too. It’s always a little tricky to get a sense of what a phone’s capable of pre-launch, but poking around in the lightly skinned build of Android 6.0 Marshmallow felt more than adequately snappy. Anyway, just above that screen is a 13-megapixel camera (with a software-powered wide-angle selfie trick to boot), while a 20-megapixel camera sits on the opposite side. And below that? A rear-mounted fingerprint sensor, a nice touch that doesn’t often wind up in mid-range devices. 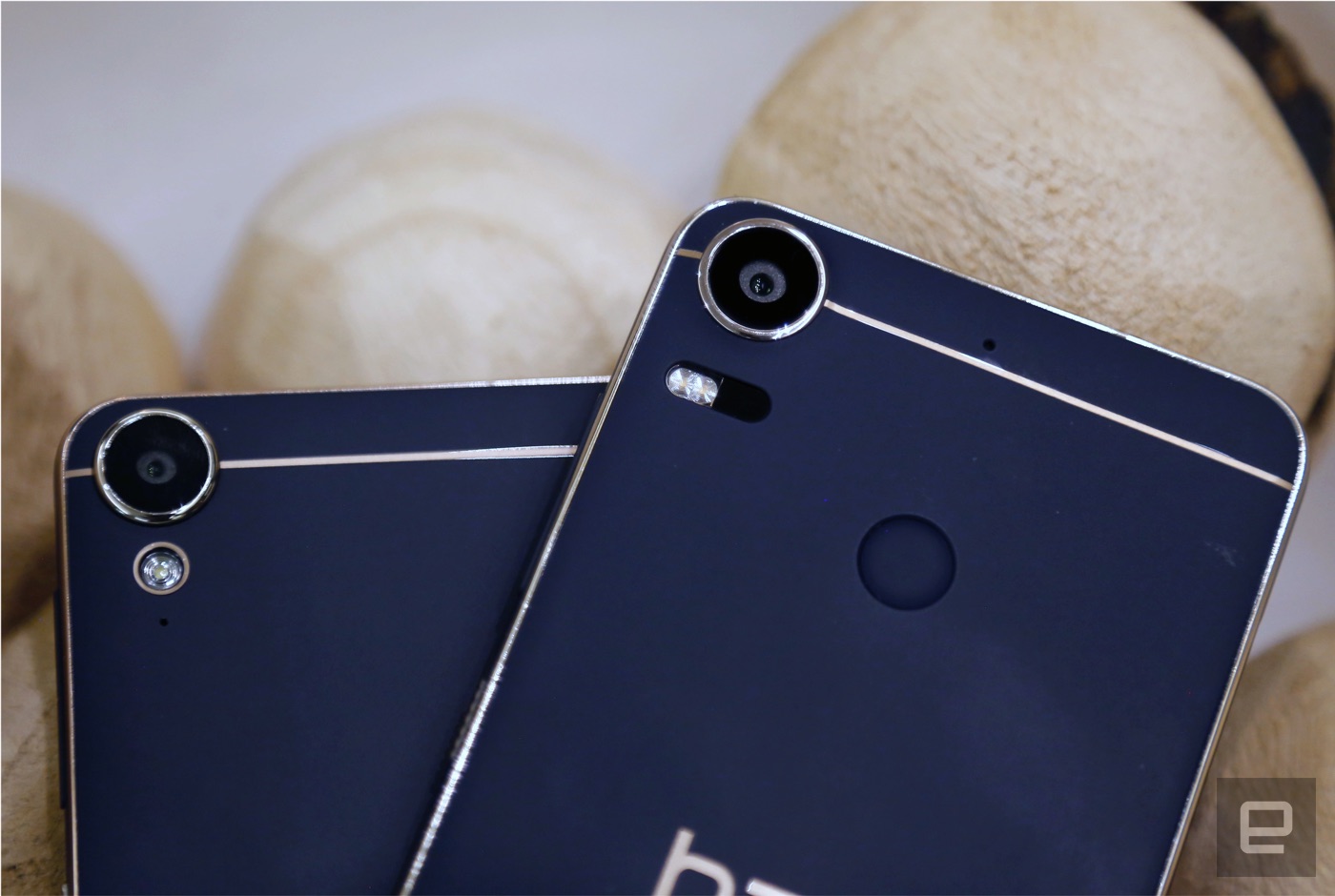 All of that (plus a 3,000mAh battery) is packed into a really handsome frame, with a matte body that gets criss-crossed with gold-ish antenna bands. This change is a far cry from the youthful Desire 530 — the Desire 10 Pro isn’t as exuberant as it is elegant. The tight tolerances and sturdy feel definitely give the 10 Pro a more premium air, and HTC’s color choices don’t hurt either. (The phone will be available in black, white, navy blue and a light blue the company’s calling “Valentine Lux”.)

You’d be forgiven for thinking the Desire 10 Lifestyle is just another barely-touched variant. After all, that’s definitely the impression HTC is trying to give off — the Lifestyle looks basically identical to its more expensive sibling despite its more modest spec sheet. There are some tell-tale signs, though, like the lack of a fingerprint sensor and a smaller flash setup under its main 13-megapixel camera. Once the Desire 10 Lifestyle is on, the phone’s lower-end ambitions are confirmed by the 5.5-inch 720p Super LCD screen — it’s still decently bright and vivid, if not the crispest out there. The rest of the differences are under the hood: there’s a slightly pokier Qualcomm Snapdragon 400 chipset clocked at 1.6GHz, either 2GB or 3GB of RAM, 2700mAh batteries, and 32 or 64GB of storage. 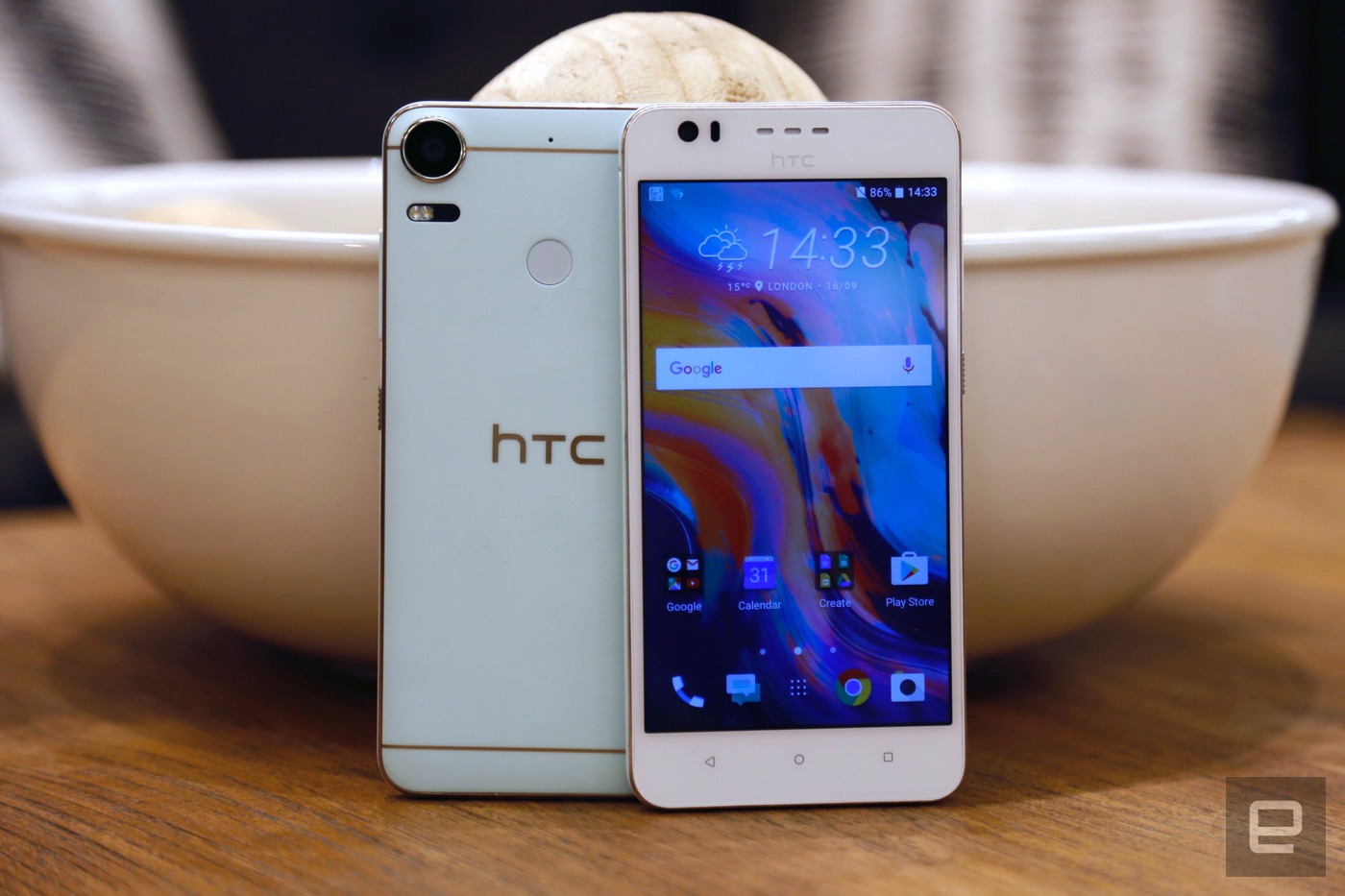 There is one other big deviation from the Pro, however: the Desire 10 Lifestyle packs support for 24-bit high-res audio like the full-blown 10. Sure, you’ll lose out on a crisper screen and biometric unlocking, but the lure of improved audio is still pretty tantalizing. That’s also the sort of feature that rarely pops up in lower-end smartphones, so here’s hoping that trend keeps up for a while. And beyond that, HTC’s build quality impresses even when it comes to less expensive hardware (think around £249 in the UK). From a distance, there aren’t any discernible, physical differences between the Pro and the Lifestyle.

As usual, HTC is leaving most of the pricing and availability details up to the carriers and retailers themselves, but if you’re in the US, you can just put your wallet away. It’ll be a least a little while before either version of the Desire 10 winds up around these parts, and probably longer still if the Desires turn out to be hits and supplies get constrained. After just a little bit of time spent with HTC’s new devices, it was pretty clear that the line that represents “good enough” smartphone performance has gotten pretty high. Then again, it’s not like the best phones are guaranteed successes: the 10 was the best device HTC had cooked up in ages, and even its tremendous quality and performance couldn’t drive huge demand for it.