With iOS 10, Apple opened Siri to third-party developers with a public API, allowing the personal assistant to summon third-party services and apps hands-free.

Two of the first apps to make use of the new Siri SDK are WhatsApp and Uber, both of which issued updates for their flagship apps this week.

Uber users can now hail a ride with a “Hey, Siri” command, followed by “Book me an Uber” or other variants. Apple has also allowed the ride-hailing service to be integrated into Apple Maps under a new Ride tab, where users can choose from a list of available drivers in the area.

WhatsApp users meanwhile can now use Siri to dictate and send messages as well as initiate calls. 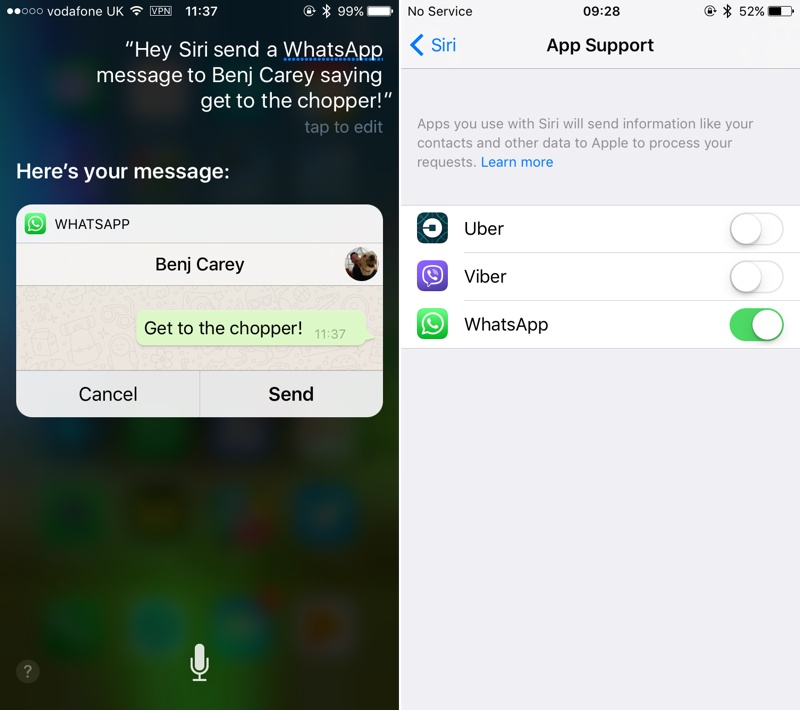 WhatsApp also becomes one of the first third-party apps to make use of CallKit, Apple’s new framework that enables VoIP calls to function in iOS 10 like FaceTime and regular cellular calls.

After updating the app, incoming WhatsApp calls appear in the lock screen showing the caller’s profile picture and the typical call response buttons. In addition, WhatsApp contacts are now integrated into the native Contacts app in iOS 10, and also appear in the Phone app’s Favorites. The WhatsApp update includes a number of other enhancements, including the ability to forward multiple chats at once.

To enable Siri integration for both apps, users should go to Settings -> Siri -> App Support and toggle the relevant switches to the on position. Users should expect plenty more third-party Siri integrations to appear in the coming months.

WhatsApp Messenger is a free download for iPhone available on the App Store. [Direct Link]

Uber is a free download for iPhone and iPad available on the App Store. [Direct Link]