There aren’t enough dedicated apps for the Apple Watch, let alone role-playing games from established publishers like Square Enix. The name alone conjures images of classic RPGs: Final Fantasy, Chrono Trigger and Valkyrie Profile to name a few. That’s why Cosmos Rings, the company’s first Apple Watch-exclusive RPG, feels like such a departure from the norm. It’s vivid, gorgeous and inspired, but unfortunately it falls victim to the very same cliches of so many mobile games that came before it.

At first glance, Cosmos Rings looks quite promising, with a narrative that’s par for the course when it comes to JRPGs. As the God of Time, you’re tasked with wandering an endless expanse called the Rift in a bid to restore time to the way you once knew it. After being moved to stop time to grant the wishes of human beings, you’ve got to repent for causing the Goddess of Time to shatter into pieces. Her crystallized remains were scattered throughout the Rift, and it’s up to you to make things right. Lost love? Check. Protagonist taking it upon himself to make things right? Double check. Now all it needs is an amnesiac to fill the rest of its RPG trope quota. 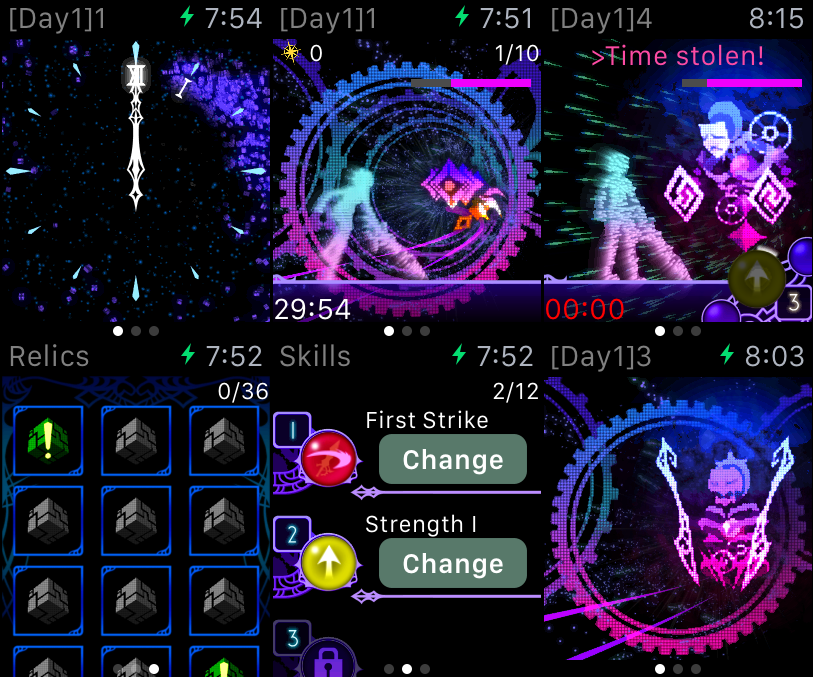 The Rift acts as the stage on which Cosmos Rings plays out. Get used to the way it looks, because you’re going to be seeing a whole lot of it. After you launch the iPhone app and open up the companion version on your Apple Watch, you’re met with a bit of expository story coupled with artwork that’s meant to move you along. These quickly introduce additional characters whose presence don’t immediately make sense in the context of the God of Time’s story, but you’ll soon realize it won’t matter much when the game basically plays itself, barring a few player-controller machinations.

That’s right — Cosmos Rings is essentially an incremental game that requires little or no input from you. The game is perfect for the diminutive Apple Watch screen, and its neon pixel art absolutely sings on the small display. But in the end, it’s little better than playing Tap My Katamari or Cookie Clicker with a few added mechanics.

The God of Time continues to run headlong into the Rift, fighting off enemies as they appear before him. This is your default screen among the three the game’s comprised of. The God will automatically attack on his own, but if you so desire you can tap the Skills button at the lower right of the screen to utilize various attacks you’ll earn along the way. If you wait for the timer to count down and then fire off a Skill right after the first one, you can chain them for additional damage. You can also rotate the Apple Watch’s Digital Crown to head to the Fragments screen, where you can spend Fragments (displayed on-screen as you collect them in battle) to upgrade your weapons, unlock additional skill slots and most importantly, earn more time.

You’ll want to keep a close eye on the time you’re allotted, especially if you don’t want to keep playing the same “days” over and over. There’s a timer at the bottom left of the screen that continually counts down. Essentially, that’s your HP gauge. Let it run out, and you’re forced to start the game from the beginning, though you’ll retain any Skills or Relics acquired in the process.

It’s more akin to a roguelike in this respect than an RPG, and is one of the most challenging elements of Cosmos Rings. If you make a mistake or forget to use Fragments to level up or augment your equipment, you can also use the digital crown of your Apple Watch in the Rift to rewind time to a specific “hour,” as the game is split into during each day, to go back and do it all again. These light strategic elements add a little variety, but the game is otherwise so hands-off you’ll wonder why you’re even interacting with it.

Bizarrely, time doesn’t cease counting down unless you’re fighting a boss, when the ticker hits 3 minutes, or during a story event where you’re given a slice of story. So if you’re planning on not playing for a long stretch of time you’ll need to make sure you do keep an eye on the game when you want to make progress. It’s almost like toting around a Tamagotchi or a Giga Pet, except you can’t let your “pet” die.

Cosmos Rings is a strange amalgam of clicker mechanics, colorful pixelated graphics and a score that you’ll want to listen to more than once, but it’s also lacking in the RPG department. When compared to its competition, a fantasy adventure called Runeblade from Everywear Games, Cosmos Rings seems feature-deficient. The former utilizes several of the same mechanics Cosmos Rings does (namely time travel), but offers an offline mode, various quests, and other reasons to keep you coming back. It’s hard to recommend Square Enix’s offering over Runeblade, especially since Runeblade is free.

If you’re looking for something to idly tap on while on the way to work or need to use your Apple Watch for a use beyond regular apps, it’s an interesting experiment. If you’re hoping for anything more than an endless grind with little input required from you, you might want to take your 3DS or Vita with you along for the ride instead. Cosmos Rings is available now as an Apple Watch exclusive.