Pokémon passed me by when it arrived in the UK back in 1999, and I’ve never really been a fan. The way my friends were suddenly gripped by its cult-like lure made it seem like the worst thing ever. In my mind, 15-year-olds shouldn’t be hunched over their Game Boy Colors; they should be trying (and failing) to talk to girls. I also objected to the title on moral grounds, since it glorifies bloodsports like dogfighting for an audience that isn’t old enough to appreciate nuance. My stance between the ages of 15 and 30 was simple: fuck Pokémon. Which is why it’s so galling that I spent last weekend roaming the city for Pokéballs. Thanks to Pokémon Go, I’ve become everything that I hate.

I’m not much of a gamer, but I installed Pokémon Go out of a sense of obligation to the site I work for. I figured that at some point I’d have to cover the title, even if the only game I play is FIFA 13 on Xbox 360. But I decided to have some fun with it, using the Pikachu workaround to capture it first and then wind up my colleagues and friends. I sent them a screenshot of my captured Pikachu and told them that I’d won the game on my first try and therefore never needed to play it again.

I didn’t bother with it much after that thanks to the one-two punch of me not liking Pokémon and also thanks to Niantic Labs’ hilarious server issues. But, while out for a walk a few days later, my wife spotted a Pidgey close to our home and encouraged me to catch it. The further we wandered, the more times her phone began to vibrate, informing her of a nearby animal to capture. After the third or fourth capture, I started to enjoy the Paper Toss-esque mini-game in which you attempt to bounce a ball on the head of your prey.

At the end of that trip, I stumbled across a Golduck with a combat points rating of 165, far in excess of the 10-point minnows we’d been catching. Naturally, we both went for it, but I managed to rinse my supply of 45 Pokéballs attempting to capture this thing which kept escaping my clutches. That was probably the moment when I became lost to the cause, since I was determined not to let this creature get away. It meant, naturally, that I had to swing past plenty of Pokéstops on the way back to replenish my supply. 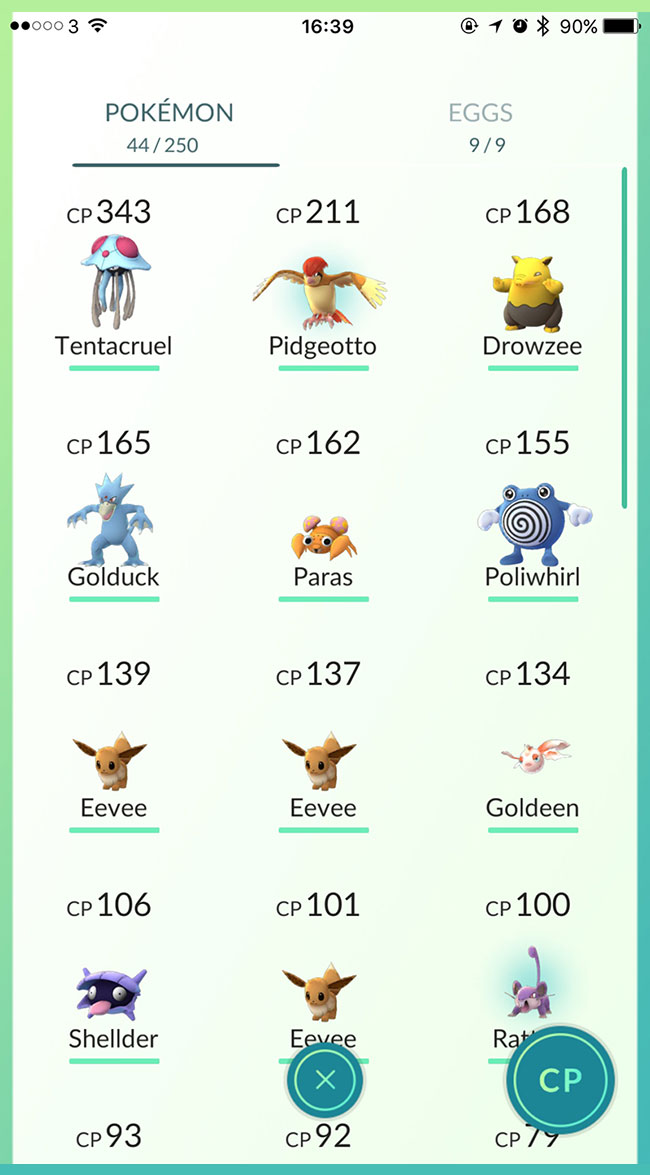 This is what a winner’s Pokédex looks like, if they suck at winning.

In the UK, it’s customary to celebrate a lunchtime Sunday roast with a long walk to balance out the Thanksgiving-level of calories you’ve just consumed. So we decided to venture out, but while we’d planned to just walk across the river, Pokémon Go had other ideas. It began suggesting that, through the older, cobbled streets that surround the cathedral, there was a litany of Pokéstops. So, we obligingly began to follow that path instead, stocking up on powerups, eggs and balls. On the way, we found a medieval defensive tower we’d never encountered before, plus a hidden riverside pathway that isn’t obvious from the road.

The walk was twice as long as planned, and I returned delighted to have found all these new spots nearby. I’d also managed to rinse my phone battery in about four hours — a new record even for me. The following morning, those same colleagues I’d ribbed the week previously were now dealing with a litany of questions. I wanted to know how best to level up, how gyms worked and what was the best way of improving my collection so that I can take over the gym across from my home.

Today, I’ve not been out on the catch, although I’ve had my phone open for much of the day picking up anything that comes within my range. When I’m done writing this, I’ll wander at least as far as my local Pokéstop to re-up on supplies, and maybe think about going a little further. I can’t believe that any game is getting me out of the house and wandering around historic sites, let alone a Pokémon game. It’ll be a while before I can get to the point where I’ll be able to fight my locals — their Pokémon all have combat points in the thousands — but I’ll get there at some point.