When it comes to advances in automotive technology, the search for alternative fuels is pretty exciting. Of course, you’ve heard about biodiesel engines converted to run on used vegetable oil that sputter out little more than water and the faint smell of French fries. However, there’s a slew of vehicles out there that run on all sorts of other fuels too. There’s an electric car powered by caffeine, as well as a hot rod that runs on air. Other curious fuel sources include plain old saltwater, crude made from algae, and (inevitably) there are even a number of vehicles designed to run on biogas generated from livestock waste (or, in layman’s terms, cars that run on poop). Although some may be smellier than others, these inventive energy sources offer an intriguing alternative to conventional fossil fuels. 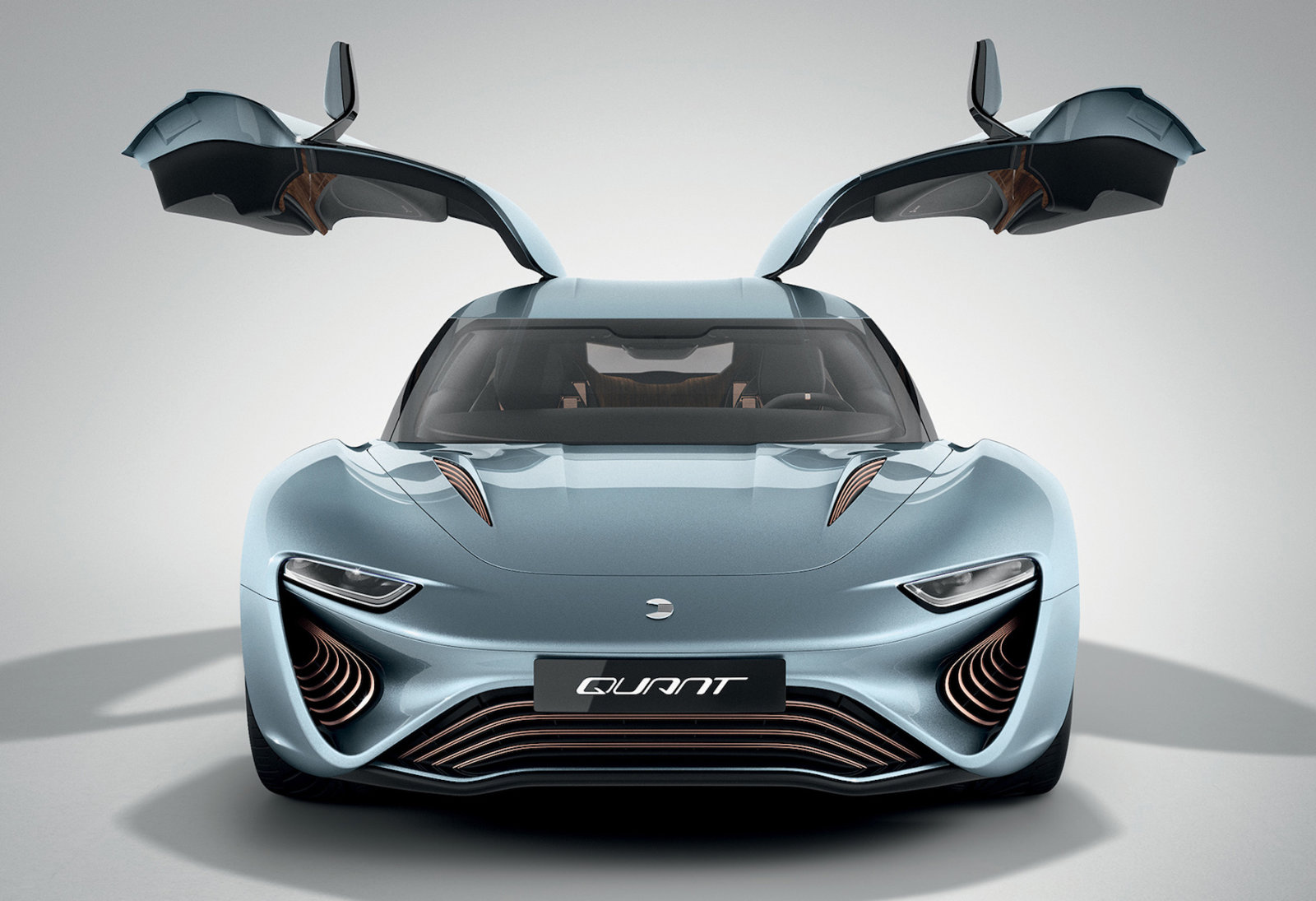 Electric cars are popping up everywhere, which is great news for the environment since these vehicles don’t emit harmful greenhouse gases. Most, though, need to be plugged in to recharge their batteries every once in a while. Nanoflowcell’s Quant e-Sportlimousine is different, because it runs on a special type of fuel made from saltwater. The gull-winged luxury car was made street legal in its birthplace of Germany, and it proves that alternative fuels don’t have to mean giving up performance. The sports car can accelerate to 62 miles per hour in just 2.8 seconds.

The Carpuccino runs on coffee 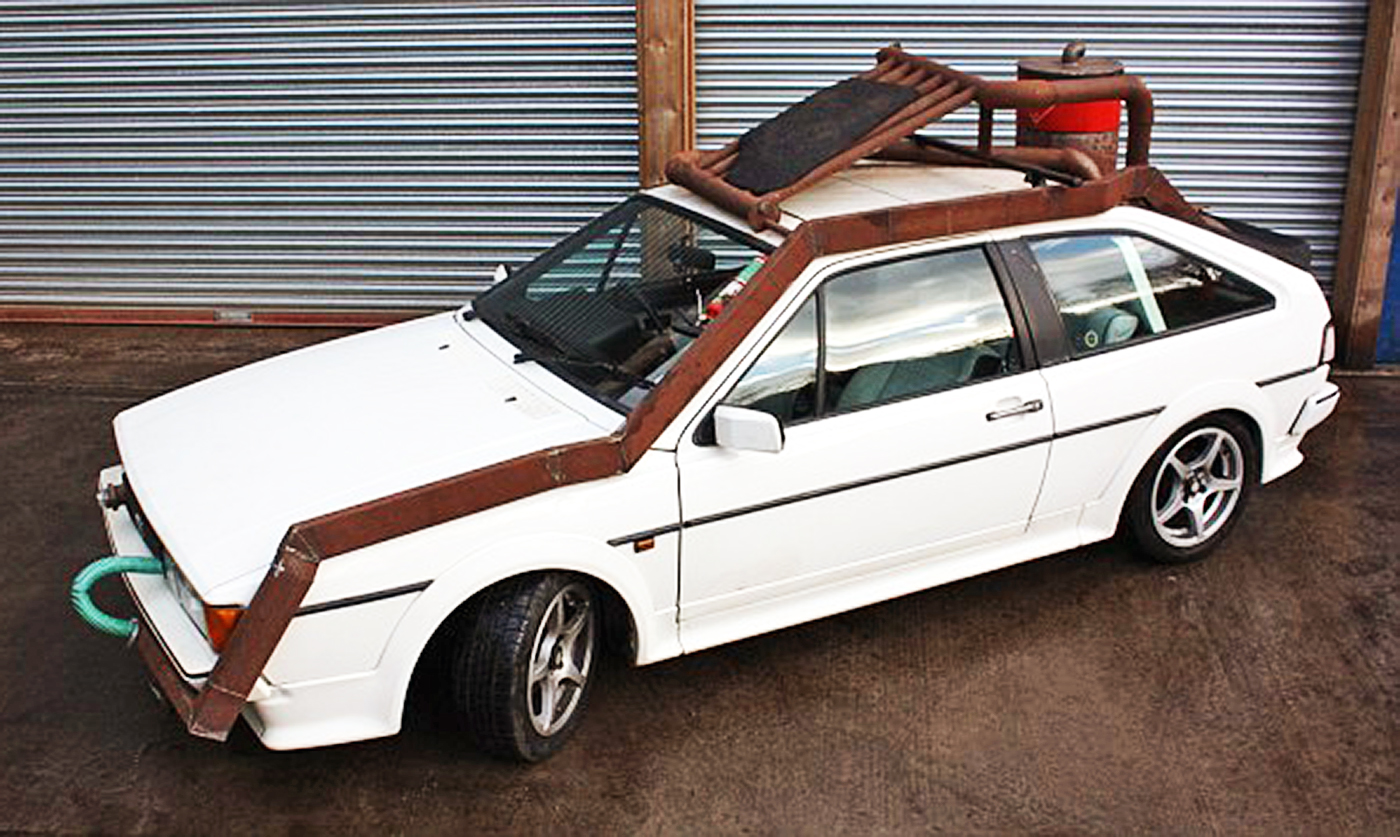 The adorably named Carpuccino created a worldwide “buzz” when it first launched because the car, like so many of us, is fueled by coffee. BBC’s Bang Goes the Theory retrofitted a 1988 Volkswagen Scirocco to run on coffee grounds, which are burned to create hydrogen and carbon monoxide. Capable of traveling at a perfectly respectable speed of 60 miles per hour, the Carpuccino has to stop every 60 or so miles so the driver can empty soot and tar from the car’s filters, so it’s perhaps not the cleanest running vehicle ever. But with the equivalent of 56 espressos per mile, it’s still pretty hot stuff. 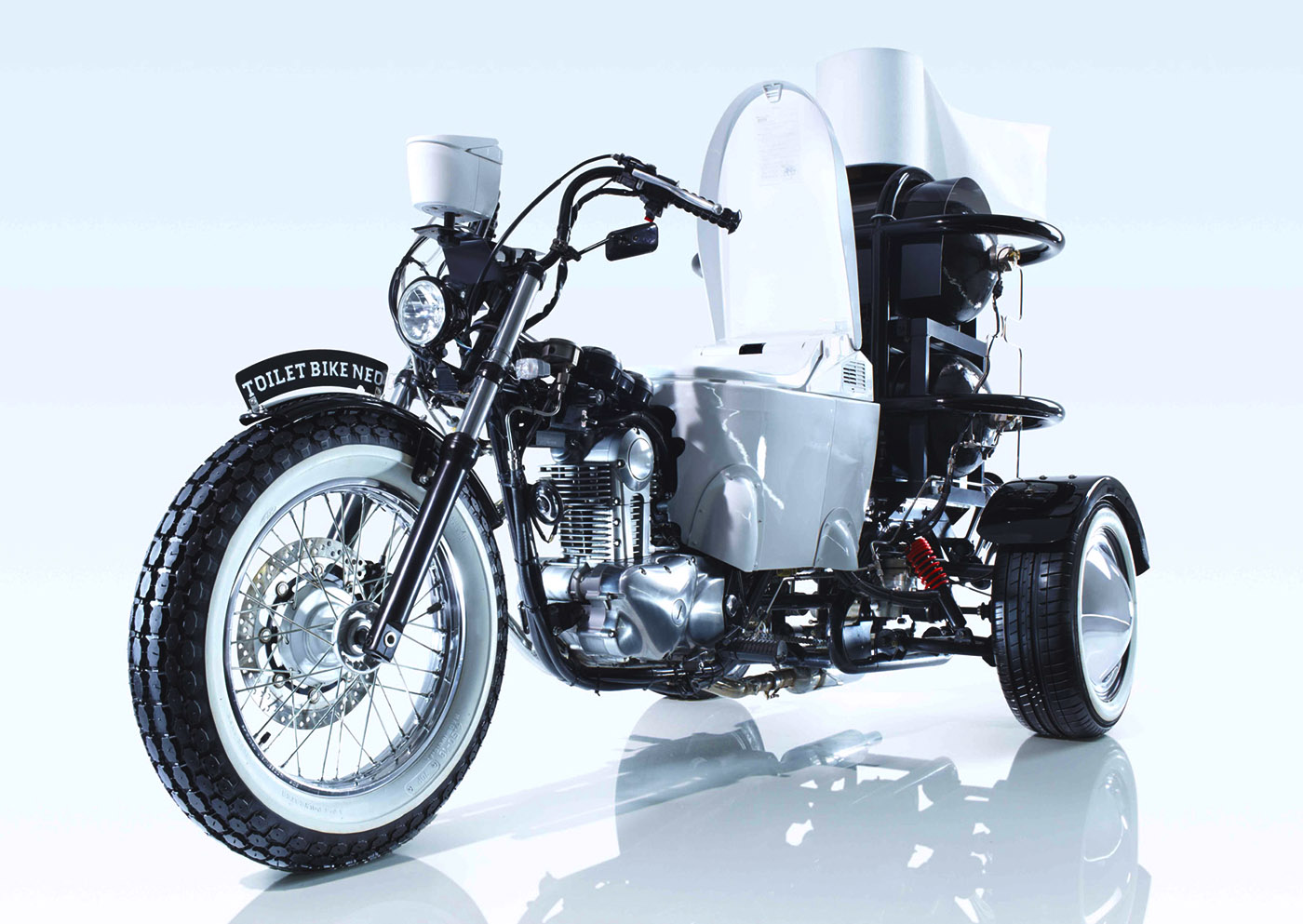 To raise awareness for its environmental policies, Japanese company Toto created the “Toilet Bike Neo,” a really strange-looking motorcycle with a toilet fitted where the seat should be. The three-wheeled bike runs on biogas created from livestock waste, which is to say this motorcycle is 100-percent poo-powered. A single tank of biogas lasts up to 180 miles on the 250cc trike, but that seems like an awful long way to travel while sitting on a commode. Toto doesn’t have plans to produce more toilet-seated motorcycles, but the trend of biogas bikes might be something worth investigating.

The supercar made from veggies 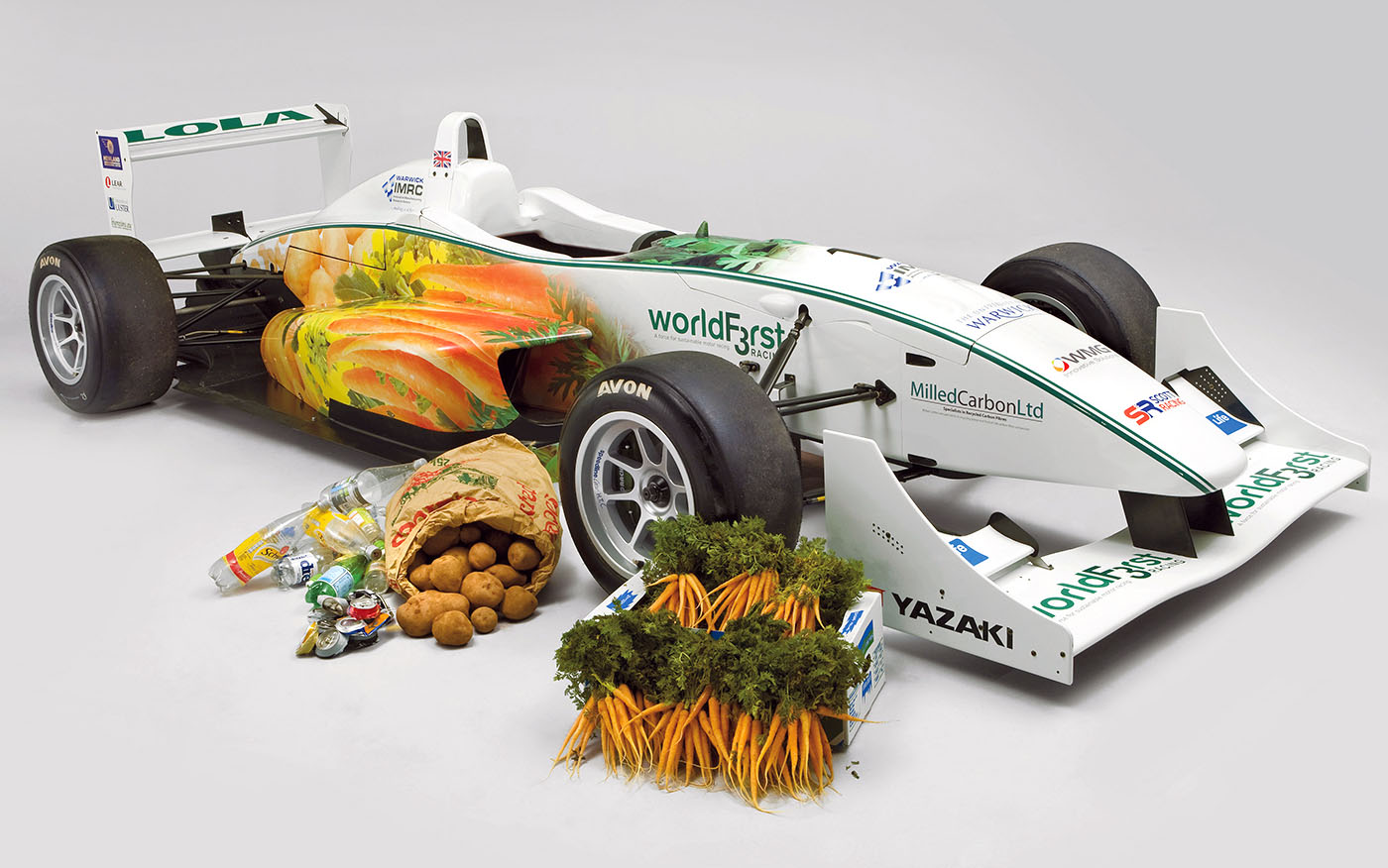 The WorldFirst F3 race car built by the Warwick Innovative Manufacturing Research Centre has a body made from potatoes, a steering wheel of carrots, seats made from soybeans, and — the icing on top –runs on chocolate and vegetable oil. With the addition of a catalyst that destroys emissions as it drives, this is one green ride that shows off the true power of plants — well, that and its top speed of an incredible 125 miles per hour.

A LEGO car that runs on air 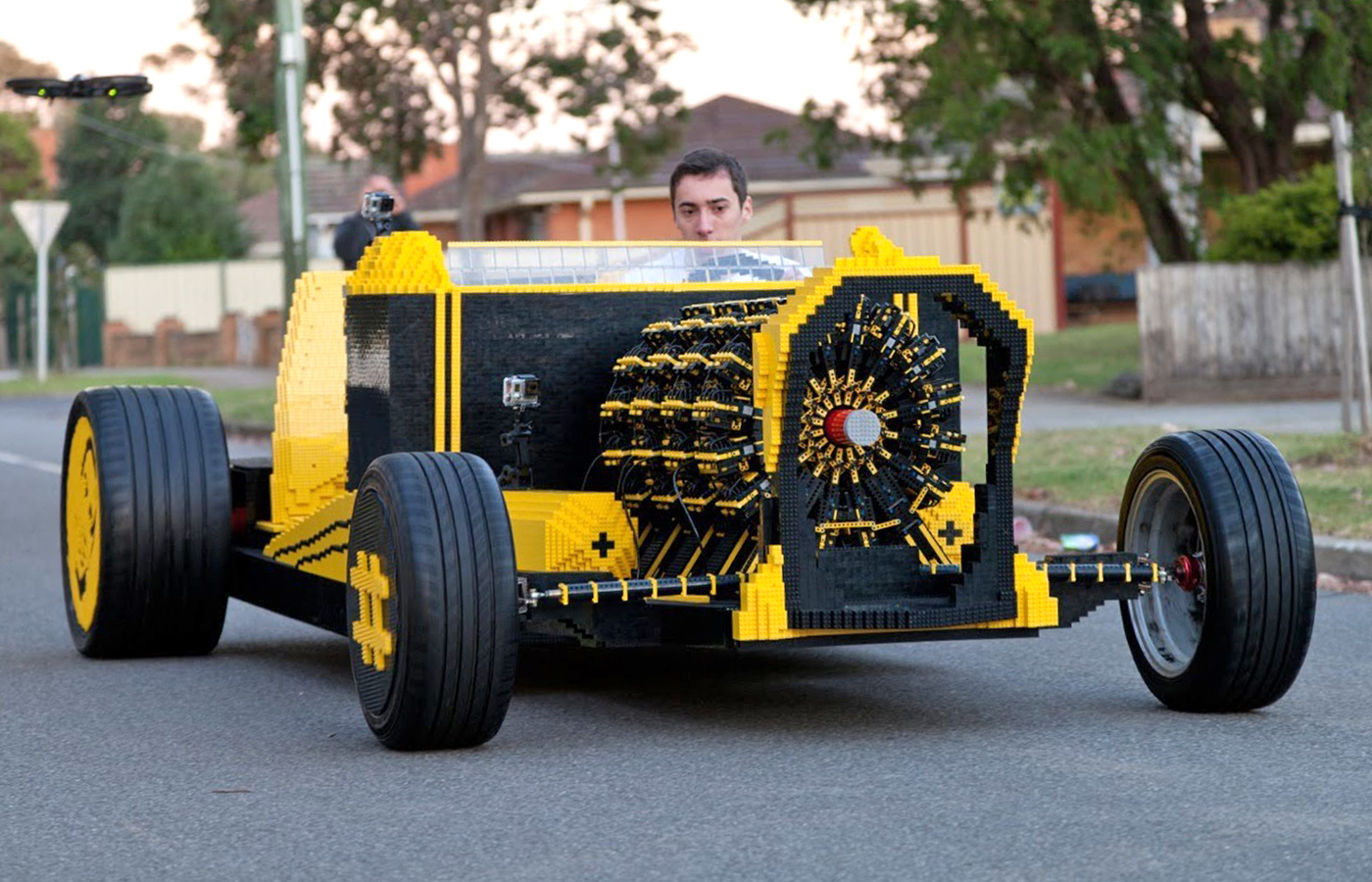 This life-size hot rod is powered by air, and it was constructed almost entirely from LEGO bricks. Steve Sammartino and Raul Oaida raised money online to fund the Super Awesome Micro Project (SAMP), which incorporates 500,000 pieces and a few load-bearing elements. Even the four orbital engines were constructed out of LEGO bricks. The car’s 256 pistons allow the car to run on air and, so far, the team has driven the LEGO car up to 20 miles per hour. The world’s first algae fuel-powered vehicle was a plug-in hybrid Toyota Prius named the Algaeus. It debuted in 2009 on the streets of San Francisco, and the green car set off on a cross-country trek that promised to consume only 25 gallons of algae-derived ‘green crude’ without any modifications to the gasoline engine. The car was part of a cross-country caravan of green vehicles, and the trip was filmed for FUEL, a documentary about America’s dependence on foreign oil. Algae fuel is still quite a bit more expensive than gasoline, but energy companies are working to bring costs down and power more vehicles with the little green organisms.

Read more from News
News
← New in our buyer’s guide: All the phones (just the good ones)
How to verify your Twitter account on Android →