These are the people playing Pokemon Go 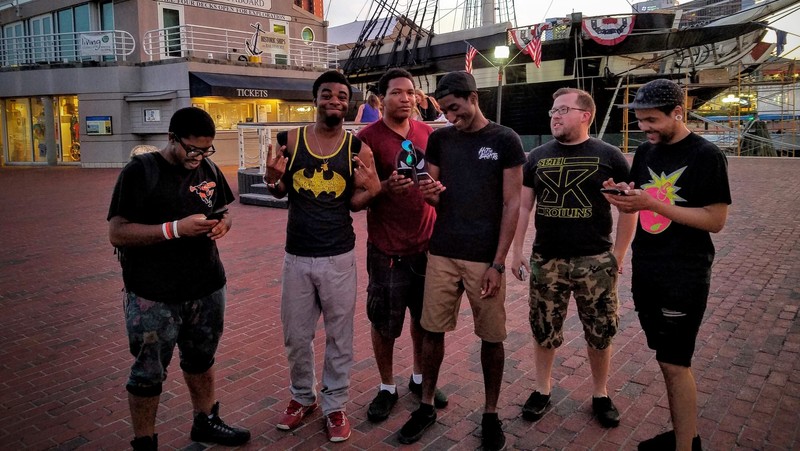 Massive numbers of people from nearly every walk of life are out in search of Pokemon right now.

As you may have noticed, we’ve published a non-trivial number of articles recently on the new game Pokemon Go. It’s a little different from our usual Android coverage, but there are several good reasons for it. The most important is simple — there are so. many. people. playing this game and looking for instructions on how to use the individual features in the game.

Who are these people, though?

If you ask folks who aren’t playing the game, you’ll undoubtedly hear something negative about the folks currently obsessed with Pokemon Go.

While there is certainly nothing wrong with not liking a game — especially one that isn’t really a part of your personal culture and wasn’t something you enjoyed while growing up — a lot of the comments I saw about what the assumed demographic for this game was seemed off. I couldn’t disagree with these folks without something more than anecdotal evidence, so I went to Baltimore’s beautiful Inner Harbor at sunset to see who was playing this game. 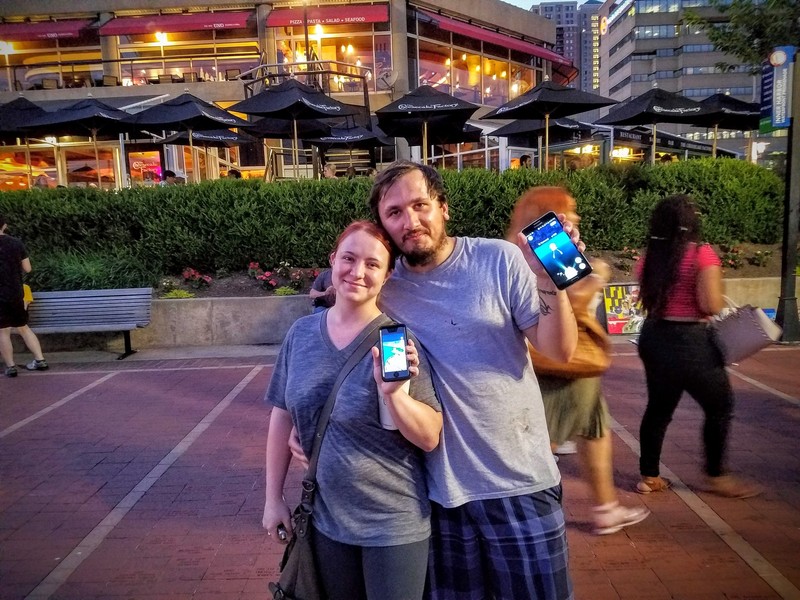 This couple decided to take a walk around the harbor after work, and have been playing Pokemon Go from Day 1. The guy noted that this was his favorite area to walk for the game because he loves the designs for the water-type Pokemon a lot, and would rather catch those. This isn’t someone living in his Mom’s basement, he has a job and a healthy relationship and a life. 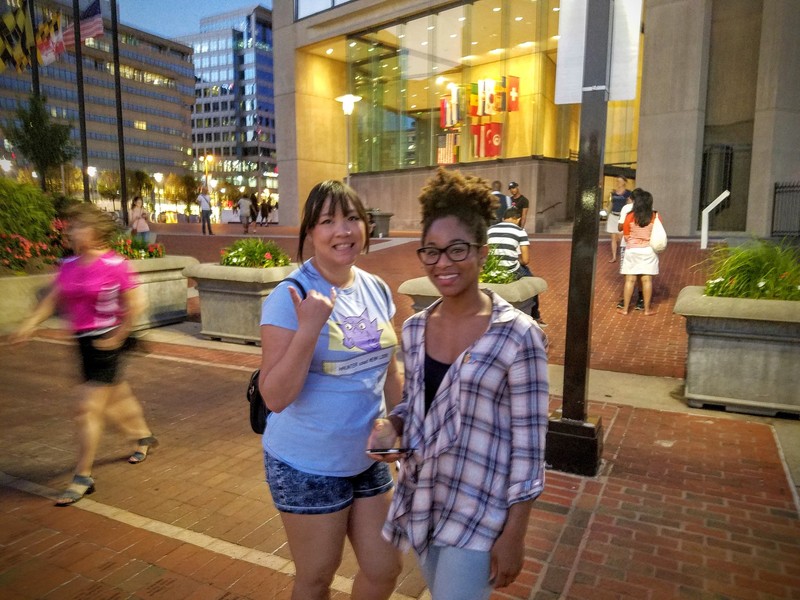 These two were angrily commenting on how frequently Niantic’s servers were going down when I stopped them to talk. The 31-year-old to the right grew up with Pokemon, and has had a lot of fun getting out and exploring the city a little more than usual with her friends. 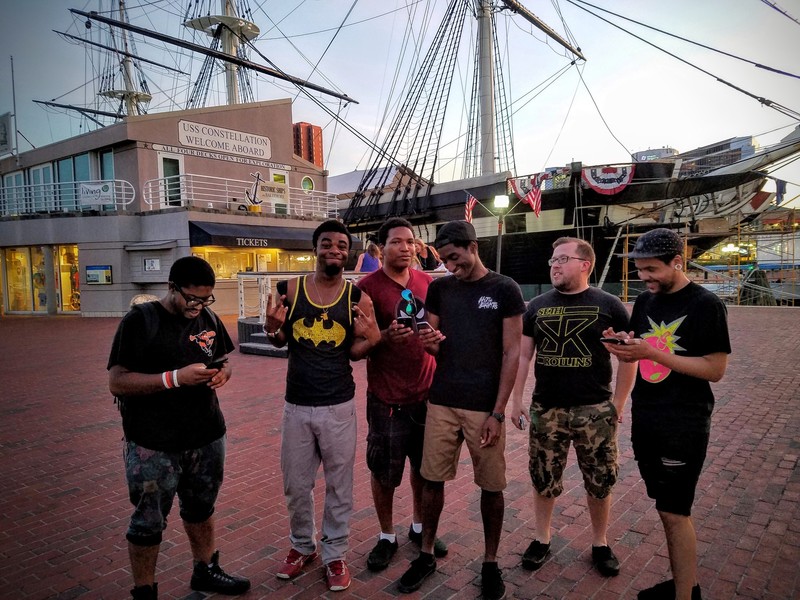 There isn’t a single person in this photo younger than 22, and all of them were wandering around playing together. They caught my attention when one of them shouted “Oh, shit! There’s a Dratini over here, son!” And no less than 15 people who had been playing the game in the surrounding area wandered over to catch it. All adults, having a good time with friends, and sharing the game with others. A woman who had just left a bar with a friend that was playing the game explained that she thought no one over 18 was playing this game, but seeing nearly everyone in the Harbor playing made her want to install it on the spot. 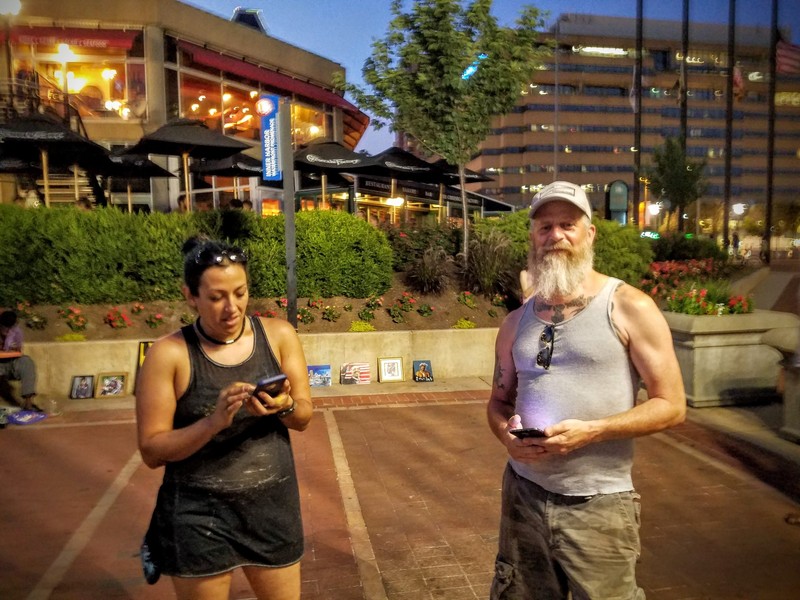 This couple had been walking around the Baltimore Convention Center when I arrived in the city and made their way to the Inner Harbor because of all the Lure Modules that had been installed on all the PokeStops in the area. The man on the right is 51 years old, and has been playing video games “from all the way back in the day” with his friends. He says he’s never seen anything quite like this, and loves how amazingly diverse the players out in the real world are.

Not one of these people could tell me what a Nexus phone was.

These are people I found willing to let a random stranger take their photo within a 20-minute span. The number of people excitedly playing this game is incredible, and quickly put to rest any arguments about the quality or age of person playing Pokemon Go. As I left the Harbor I saw three police officers on bikes. Two of them were cautiously watching as people ran between the Pokestops, unsure of what to think of the activity. The third explained out loud that this actually started during his shift on Friday, and there had never been so many people in this area in the evening before without an event happening somewhere nearby.

By far the most amazing part of all this is how few of these people ever go to tech blogs for news about anything. Not one of these people could tell me what a Nexus phone was, or which Samsung phone got the latest updates. These are people playing a game, having fun, and looking to share those experiences with other people. Personally, I’m looking forward to giving those people new things to read.

Read more from News
News
← T-Mobile is offering free Galaxy On5 or Galaxy J7 for all lines on select plans
Sphero BB-8 is $28 less for Prime members today! →