We’ve tested 54 different commuter lights in the last four years, and have researched literally hundreds. After all that, and a lot of price fluctuations, we believe the Light & Motion Urban 350 is currently the best way to see and be seen in traffic without spending a fortune. You can’t get a better-made light for the price and it looks great. Pair it with the Cygolite Hotshot 50, a taillight that runs seemingly forever and works in all kinds of conditions. It can be seen in traffic from half a block away, day or night, and costs less than anything comparable. 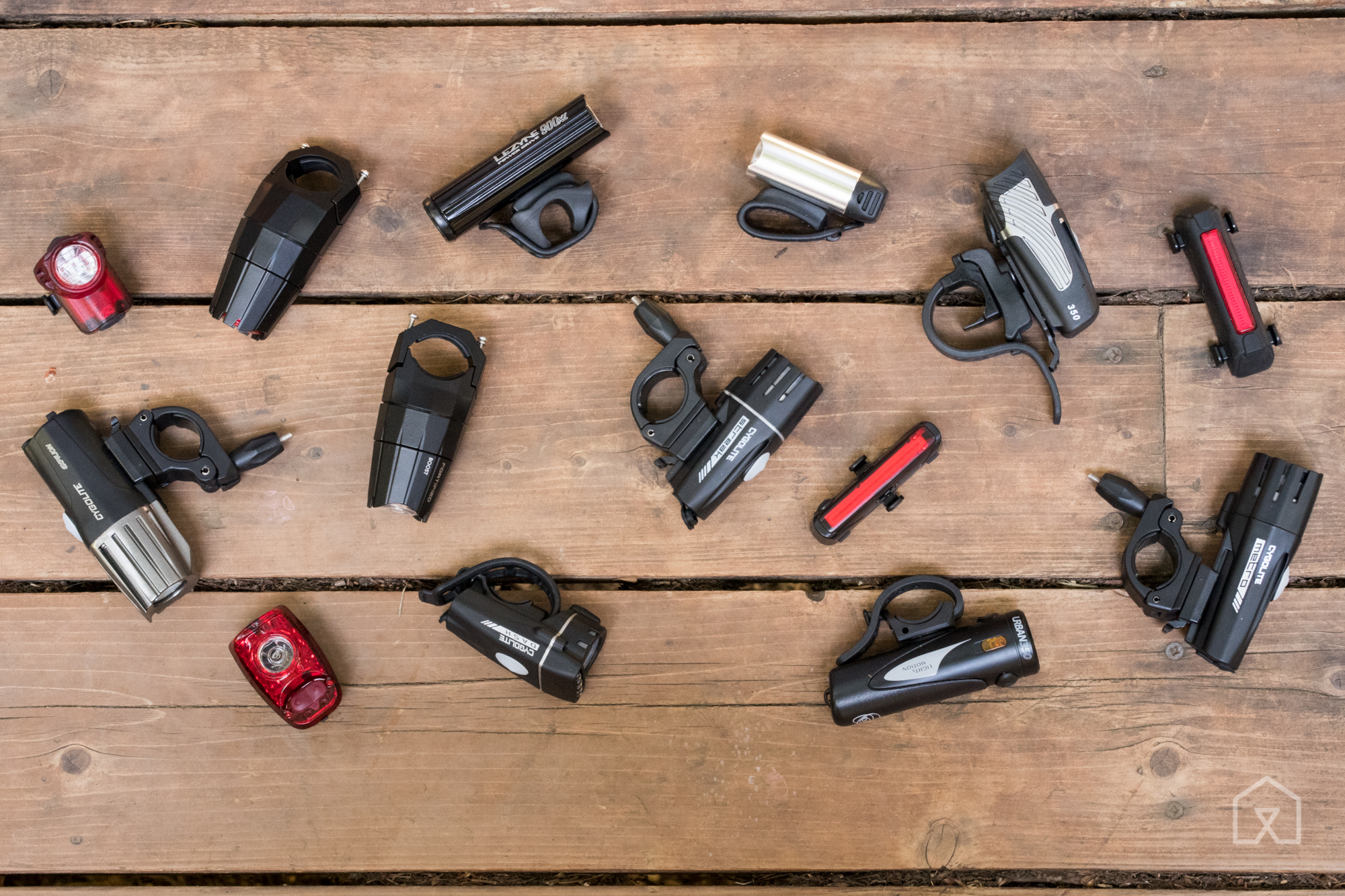 To test our latest batch of lights, we simply shined each one on the ground, and didn’t find anything we hadn’t seen during testing in previous years: All the brands project different patterns, some square, some round, some smooth, some wavy—and when we look at them projected from our bike onto a city street, they look similar.

We’ve installed every mount there is—the screw-lock mounts of Cygolite and NiteRider, CatEye’s FlexTight bracket, Knog’s trademark bungee, ratchet-style clamps used by Planet Bike and Serfas, and every other iteration of silicone-strap and hard-plastic mechanisms—and ridden them on terrible roads.

We’ve tested battery life, draining more than 25 lights to empty to cross-check run-time claims and find out how light output changed over time and how the lights turned off.

We even started freezing our taillights to see if cold temperatures would compromise the battery.

All of these things do matter. But we decided the most important thing we could do is look at each light from the vantage point of a car. So our panel of five testers sat in the driver’s seat and observed our top headlight contenders from two critical angles: as the driver prepares to make a right turn as a bike in the bike lane approaches it from behind, and on the car’s left as the driver is getting ready to pull out of a parking space or exit the vehicle.

We also had testers look at our taillights. They stood on the sidewalk a block away and observed in order to address a question that numbers can’t answer—when a driver looks at this light, will they see that it’s a bike? We’ve done this both in daylight and at night, and in a bracket-style elimination round we narrowed the field to our top choices. 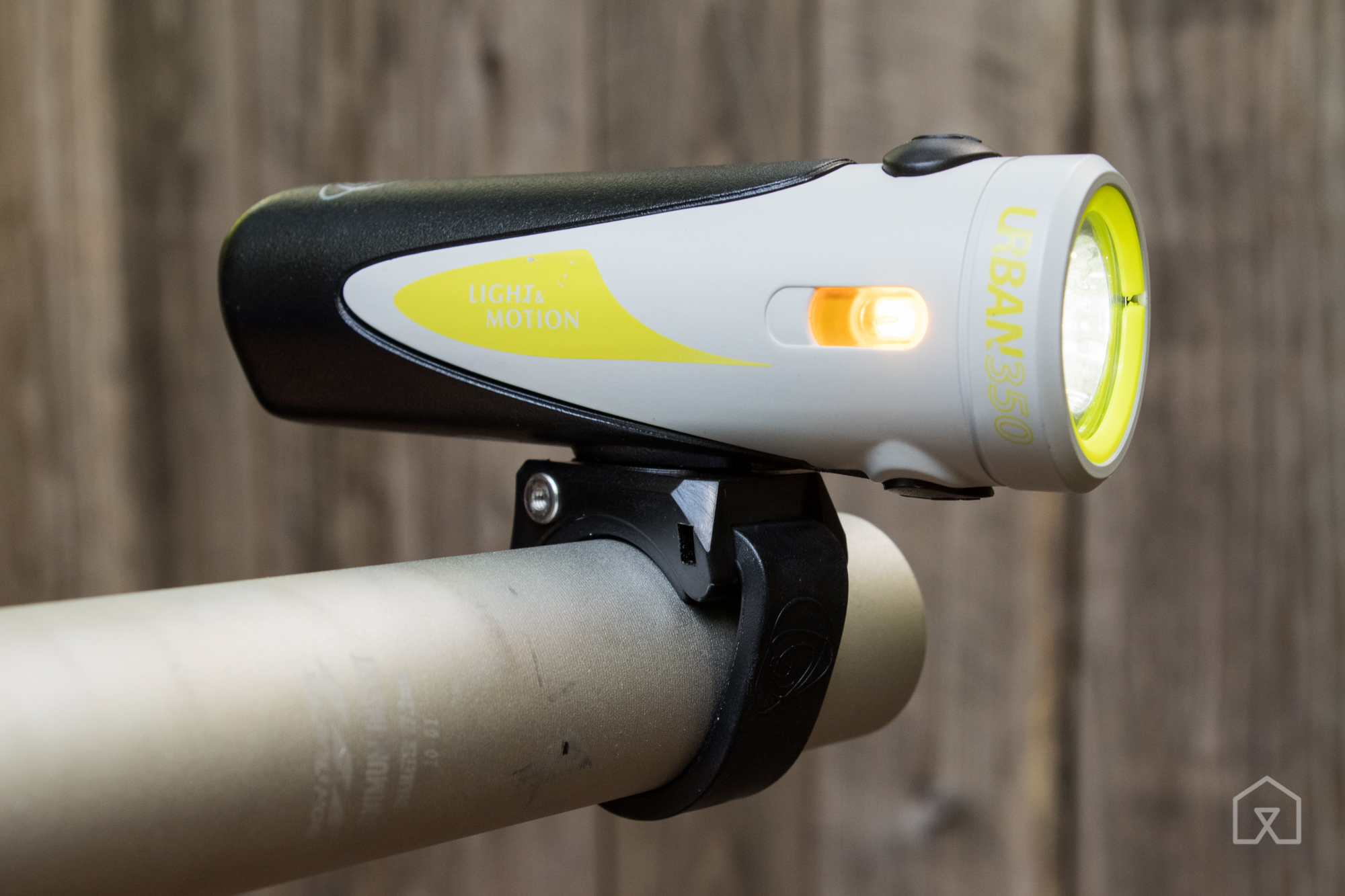 The Urban 350 in Voltage. It comes in two other colors, Blue Moon (white on blue) and Obsidian Stout (black on black). Photo: Eve O’Neill

The Light & Motion Urban 350 was our upgrade pick for years, and now that it’s dropped in price, we feel you can’t get a better light for the money. It has four light modes, including one that can blink and shine light ahead of you at the same time so you can see and be seen in traffic simultaneously. Bright amber side cutouts increase your visibility to cars on either side of you, and the silicone mount is both easy to use and superstrong—ours hasn’t stretched or broken in three years of long-term testing, and no matter how hard you mash the power button the light won’t budge. Light & Motion Urbans are also FL-1 certified, which means the company took measures to guarantee you get the number of lumens advertised on the box, a claim that can often be misleading. The best part is that these lights look great. They’re a pleasure to hold and use, something that can hardly be said about any bike light. They also come in several nifty color schemes and are available as brighter models if you want more light.

Our top pick works great, but if you want the light that our testers rated most visible from a car driver’s seat, the Cygolite Metro 400 is it. It has two more modes than our top choice, including a very bright day flash (the most eye-piercing we’ve seen—which you should not use at night because you’ll blind everyone!) and a walking mode that runs the light on low power to save battery. 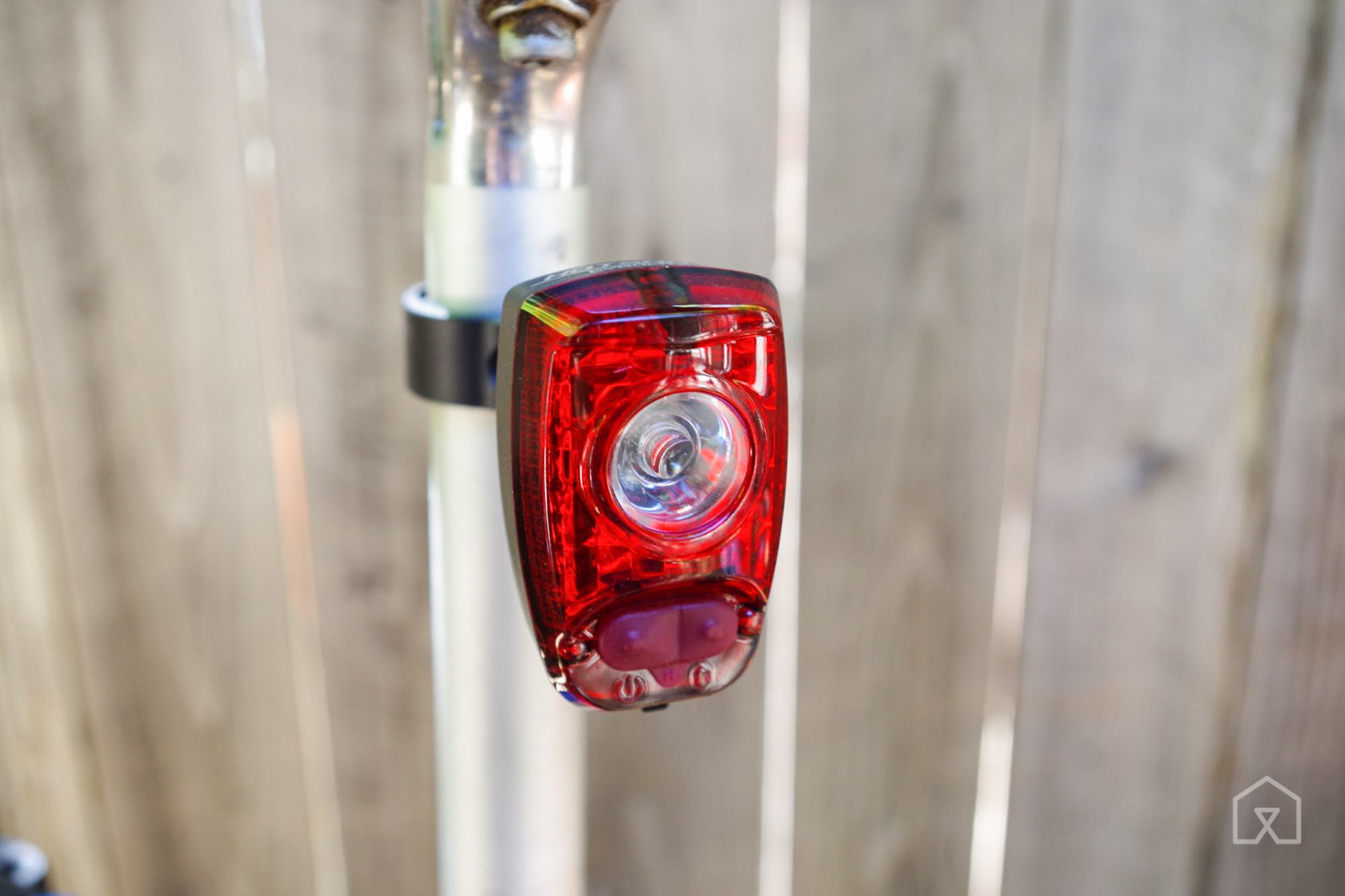 The button on the lower left is the on-off. The button to its right lets you customize the frequency of the blink pattern. Photo: Eve O’Neill

A very bright and affordable light, the Cygolite Hotshot 50 is an updated version of the older 2-watt version. It’s brighter overall, and the on-off button, which we thought was a little sticky on the original, was redesigned on all the Hotshot models and is now easier to operate. Observers sitting in a car’s driver’s seat chose it as the most visible light out of all the models we tested thanks to its attention-getting flashing pattern and bright LED. It’s a workhorse piece of gear that has shown more consistent battery life and fewer mounting issues than anything we’ve tried. A brighter version is now available, the Hotshot Pro 80, for those who ride in very dark areas (or very sunny ones).

If you don’t want to use the traditional hard mount that comes with the Hotshot, get the Hotshot Micro. It performs the same, but comes in a smaller package and has slightly less run time (but you won’t notice). 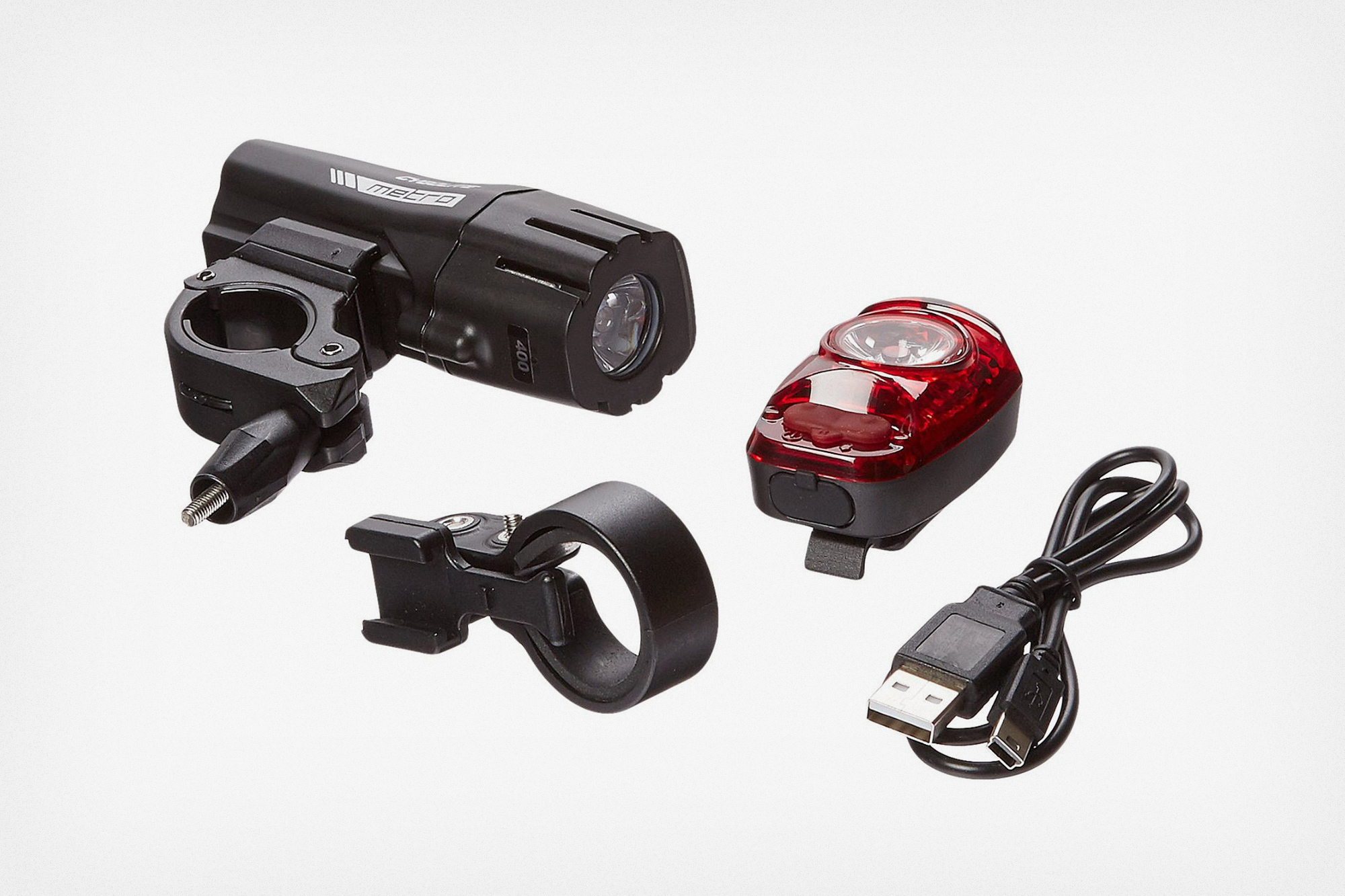 The Cygolite Metro 400 headlight and the Hotshot 50 taillight.

The Cygolite Metro 400 was our top pick in the past and is still a great value. More important, our testers regularly rate the blinking pattern on Cygolites as the most visible. It has the simultaneous blink/steady pattern that we love for its ability to let you see while also shining into the eyeballs of traffic, and a quick-release mount (the hard kind) that doesn’t budge once you put it on. This combo includes the Hotshot 2-watt, which is an older version of our current taillight pick, the Hotshot 50. But older doesn’t mean outdated—it’s a touch less bright, but still plenty bright for a commute. Otherwise, the design is identical, including the easy-to-push button like our top choice, and we don’t think you’ll even notice the difference in light output.

If you can’t find what you’re looking for here, we also have some alternative picks in our full guide: a brighter light that can give you more visibility (or more battery life), a permanently installed, antitheft pick, and a rec for a helmet-mounted front-and-rear set if you want to augment your on-bike lights (also a great option for those who use bike share). We also have an alternative taillight option with a wider, brighter beam.