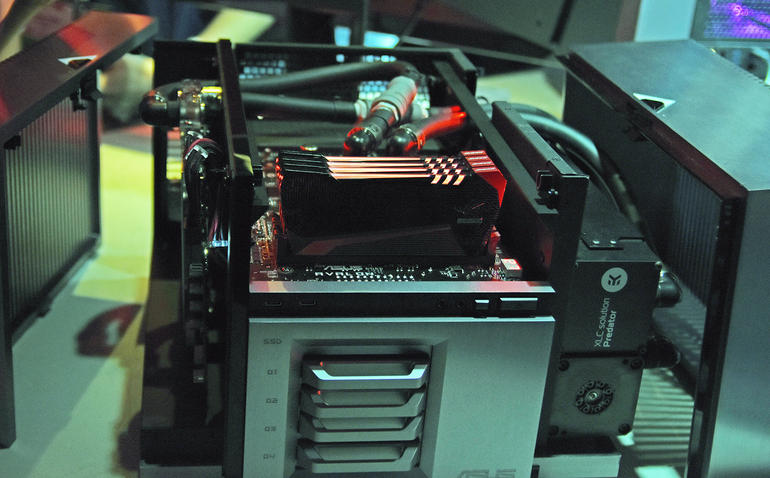 Computex is usually a great place to showcase new stuff, and apart from the Asus Zenbo robot that made its first steps today at enslaving the human race with cuteness, Asus here in Taipei has announced a new hybrid motherboard-chassis combo called Avalon that promises to change how you assemble your future DIY PC.

The idea behind the Avalon is simple. Instead of having to worry about how to squeeze your massive Nvidia GTX 1080 into the limited space in your chassis, by making the board part of the chassis, the Asus ROG Avalon lets you better manage the space by keeping things a lot neater.

If you’ve built your own PC before, you’ll know what a pain it is to properly plan how you want all the components properly installed, so you don’t end up trying to squeeze between the tight spaces to adjust something.

The Avalon does away with this by optimizing the layout with a plug-and-play style and doing away with cabling. Components are also easily accessible and slotted in instead of being buried behind other components like in a normal PC build.

However, there appears to be a drawback. If you ever want to upgrade your PC, you can switch all your parts except for the motherboard, since it’s built into the chassis. The Avalon uses last year’s Intel Z710 chipset, which should be good for a few more years, but after that, you’ll have to upgrade the chassis as well if you want to use a newer processor that’s likely not backward compatible.

With the Avalon being a proof-of-concept still at the moment, don’t expect pricing or shipping. If Asus does see demand though, we could probably see the Avalon hitting stores in the near future, though hopefully with a newer chipset.