The Good The G65 combines a timeless look and appeal with genuine off-road robustness and a heady dollop of luxury.

The Bad Beyond being catastrophically expensive to buy and run, the G65’s V-12 engine isn’t as nice as the V-8 in the much-less-costly G63 AMG. Like all G-Wagens, the G65’s recirculating-ball power steering doesn’t just take some getting used to, it’s comically bad.

I recently showed the SUV seen here to Rob, a car-loving friend. After studying its appearance, climbing in and around it, fiddling with the power driver’s seat and listening to the engine fire up, he offered up his first impression: “This thing is absurd. It…it makes no…no sense. It’s just so…stupid,” he stammered.

That comment was still hanging in the air when he quickly followed it up with, “So, how much do you think it’d be for a used one? I’d totally drive this.”

It didn’t take my friend more than 15 minutes of pawing around to arrive at the same conclusion that took me a week’s worth of driving to figure out. This 2016 Mercedes-Benz G65 AMG — all $223,575-worth of 12-cylinder-powered Mesozoic-era Brinks truck — is at once ridiculous, terrible and amazingly wonderful. So amazing, in fact, that if I hit the PowerBall, my lizard brain would surely have me reflexively headed to my nearest Benz dealer. 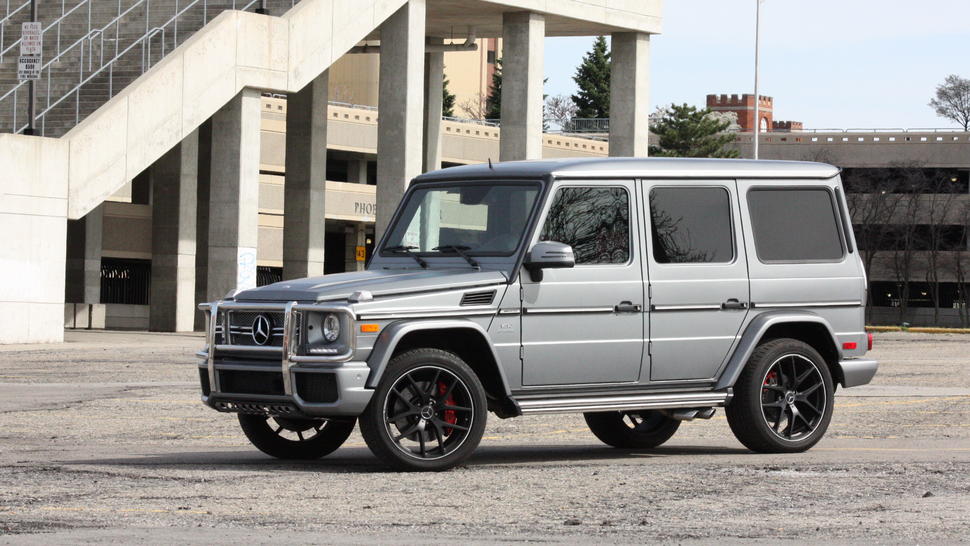 Mercedes’ G65 AMG has a primal, lizard-brain appeal like few other vehicles.

Don’t judge, and don’t be surprised at the deeply conflicted thought progression of anyone pulled into this matte-gray planet’s orbit. Mercedes’ square-jawed, square-everything SUV is barely bound by the laws of nature, let alone those of reasoning and common sense.

Like some sort of four-wheeled yeti, this vehicle is a mysterious, age-old beast that’s been spoken of in hushed tones for decades under multiple names: G-Class. Geländewagen (“cross-country vehicle” auf Deutsch). G-Wagen for short. Slice one in half and study its rings like a giant sequoia, and you’ll find that whatever you call it, the G-Class dates directly back to 1979, making it one of the very oldest vehicles you can still buy new. Yet despite its advanced age and stratospheric price tag, the last couple of years have seen this SUV achieve its best-ever global sales tallies. (April figures alone were up 19.1 percent year over year in the US.)

In other words, the G-Class is having a moment.

You needn’t actually lay eyes on Big Benz to know it’s unlike anything else on the road — all you have to do is hear it. From the sharply metallic rifle-bolt clack of its door locks to the singular, prolonged whir of the starter motor that brings its leviathan 6.0-liter bi-turbo 12-cylinder to life, there will be no confusing this Three-Pointed Star for a Land Rover Range Rover Autobiography or a Bentley Bentayga — essentially its only rivals in the $200K SUV Club. It’s a feast for the senses.

Even the door and hood hinges stand proud in the slipstream, each its own tiny little “@#%^ you” to aerodynamic efficiency.

And it’s murder on the wind. The G65’s bodywork treats the air the way its V-12 treats global warming: like a nasty rumor it’s singlehandedly trying to debunk. From an upright grille to fender-top turn-signal protuberances and lighthouse-vertical windows, the G-Class is so openly disdainful of the passing atmosphere that it feels like some kind of strategy — the sheet metal equivalent of one of those resistance parachutes that sadistic athletes use to build stamina, perhaps. Even the door and hood hinges stand proud in the slipstream, each its own tiny little “@#%^ you” to aerodynamic efficiency.

Lay off the G65’s throttle at freeway speeds and you can actually feel the bruising wind and the parasitic drag of its four-wheel-drive system slowing things down. With 6,000 pounds of German history on its back, it should come as no surprise that the G65’s handbuilt 6.0-liter V-12 is rarely loafing when on the move. You’ll find yourself calling upon its 621 horsepower — and more importantly, its scarcely fathomable 738 pound-feet of torque — on the regular. 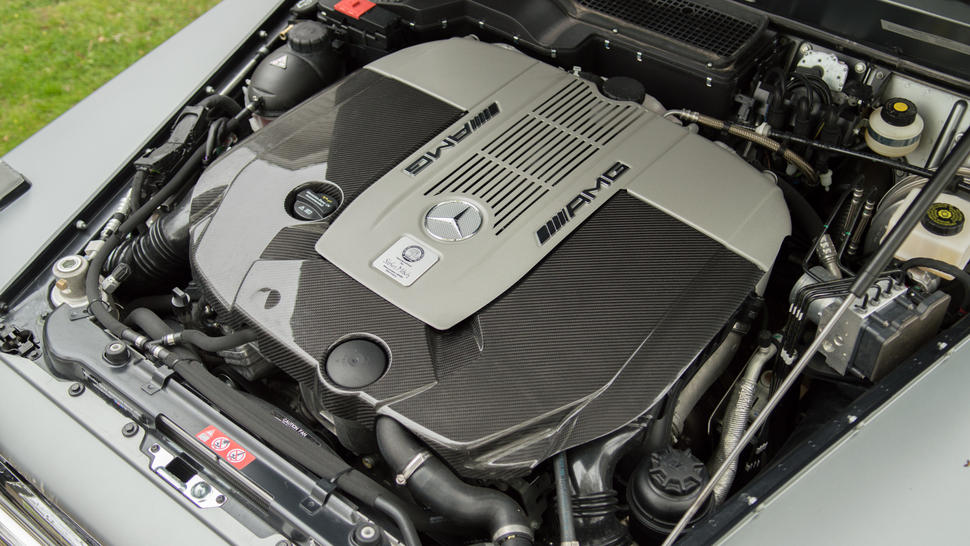 For an extra $78,000, buyers receive four additional cylinders amounting to an extra half-liter of displacement, meaning the V-12 is priced like all of its parts came out of a Ritz-Carlton minibar. Yet according to Mercedes, you’ll only be quicker than the $139,900 G63 to 60 mph by 0.1 second, with 60 mph arriving in a rapid 5.2 ticks. (OK, top speed is bumped up to 143 mph, an increase of 13). Thing is, I’ve driven the V-8 G63, and it actually feels quicker than this rig because it doesn’t have as narrow of a powerband. Playing the G65’s dozen cylinders only delivers max oomph within a very specific range of engine speeds. And while it isn’t as old as the box that it comes in, this hand-built M279 V-12 has its roots in an engine family that dates back to the late 1990s, and it doesn’t like to be hurried when cold.

Let’s call a spade a spade: The G65’s engine isn’t as good as the one in the far less-expensive G63. Its raison d’être is to be the winner in the owner’s personal cylinder-waving contest, and as the first V-12 available in an SUV in nearly a quarter-century, well, mission accomplished.

While its engine isn’t modern, the G65 at least has a more up-to-date transmission that helps make the most of it. The seven-speed AMG Speedshift Plus 7G-Tronic gearbox has — you guessed it — seven speeds, and whether left to swap cogs by its lonesome or when using the manual paddle shifters, it does a good job of keeping the engine on boil.

Even if you’ve only been skimming this article or taken a glance at its photographs, you know the G65’s fuel-economy picture isn’t pretty. Eleven miles per gallon city and 13 mpg highway are the official EPA estimates, and single-digit real-world returns are likely, even without enthusiastic use. OPEC ministers, rejoice.