The BenQ HT2050 is the best $1,000 projector for those who want a bright, colorful, detailed image—better than what’s possible with cheap projectors—but don’t want to spend more than twice as much for the next serious upgrade. We’ve based this on over 50 hours of research and 110 hours of directly testing seven competing models (and considering six others) with the objective measurements of $20,000-worth of testing gear. The HT2050 has the best contrast ratios in its class and light output that’s brighter than some projectors that cost three times as much. What really sets the HT2050 apart, though, is accurate color, which produces a more realistic image than the rest of the field.

Projectors can range in price from a few hundred dollars to tens of thousands. Here’s the tricky part—picture quality doesn’t increase linearly as you go up in price. More often, there are gems at specific price points. Our pick is for someone who wants good picture quality but doesn’t want to spend more money on our awesome projector pick but wants a better image than that of our $500 pick.

What makes a good projector

The two most important attributes of a projector are contrast ratio and brightness. Contrast ratio is the difference between the brightest part of the image and the darkest. A lower contrast ratio would mean the image is more washed out, usually with more gray-looking blacks.

Brightness, or light output, is almost equally important. It determines not only how bright the image is (obviously) but also how large an image you can create (image brightness decreases with image size) and, in many ways, what type of screen you can use.

These two factors are followed in importance by color accuracy, and, more distantly, resolution and color temperature. Lastly, all projectors need a screen of some sort; just shining them on a wall won’t result in the projector’s output looking its best. 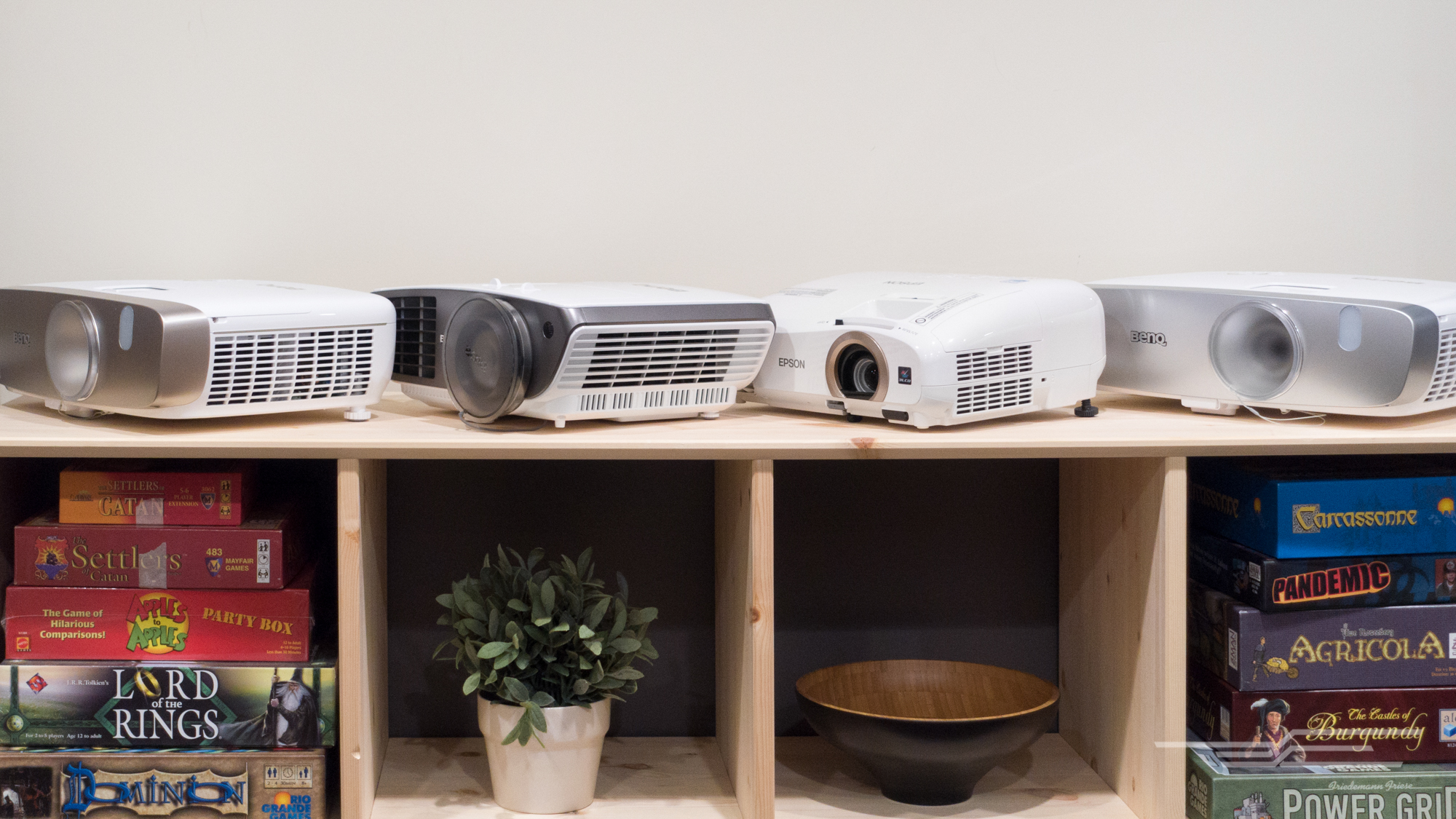 For our original article, we compiled a list of all the projectors in the $1,000 price range that had positive reviews. It was a surprisingly short list, as not many websites review projectors with the in-depth, objective measurements we’re looking for. We also eliminated business projectors, because their colors and processing aren’t typically as good for movies and TV as a home theater projector.

BenQ recently created a new model to replace our previous pick, so we got in the replacement and tested it, along with several other new models. We did our testing using i1Pro2 and C6 meters with SpectraCal’s CalMAN software. We tested for light output, contrast ratio, color, color temperature accuracy, and more. 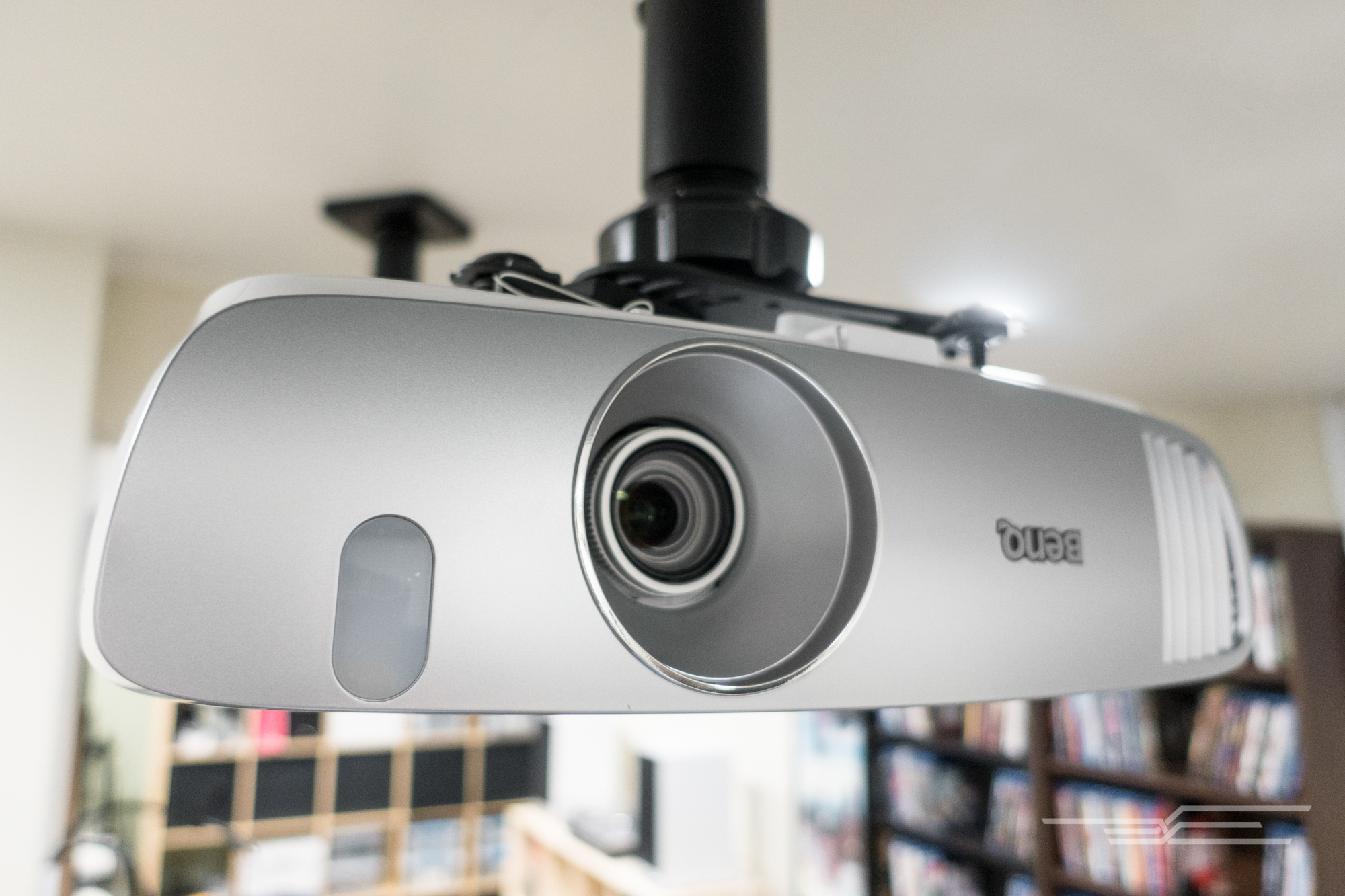 The BenQ HT2050 has one of the best contrast ratios in its class. Photo: Chris Heinonen

The BenQ HT2050 offers accurate colors, meaning its image is more realistic and lifelike than that of other models at the same price. It’s also bright, has a decent contrast ratio, and has great detail with motion. Overall, the image is better than most projectors from five or more years ago and as good as (if not better than) that of many at several times its price.

Measuring the light output with a lux meter, we found that the BenQ produced 1,130 lumens when calibrated and in eco-bulb mode and 1,665 lumens calibrated in normal-bulb mode. Switching to vivid mode gave us a less accurate image but a massive 2,200-plus lumens.

To put that another way, a movie-theater screen should be around 15 foot-lamberts in brightness. The HT2050’s 1,665 lumens is enough for 24 foot-lamberts on a 150-inch version of our favorite projector screen. Basically, the image will be plenty bright, even if you get a giant screen.

The HT2050’s contrast ratio is 1,574:1. Without calibration, this measures even better at 1,719:1. Plus, though other projectors in this price range have inaccurate colors—especially greens, for example—colors look far more realistic on the HT2050 than on the competition. That means more natural-looking grass, more realistic blue skies, and so on.

A previous pick with great performance 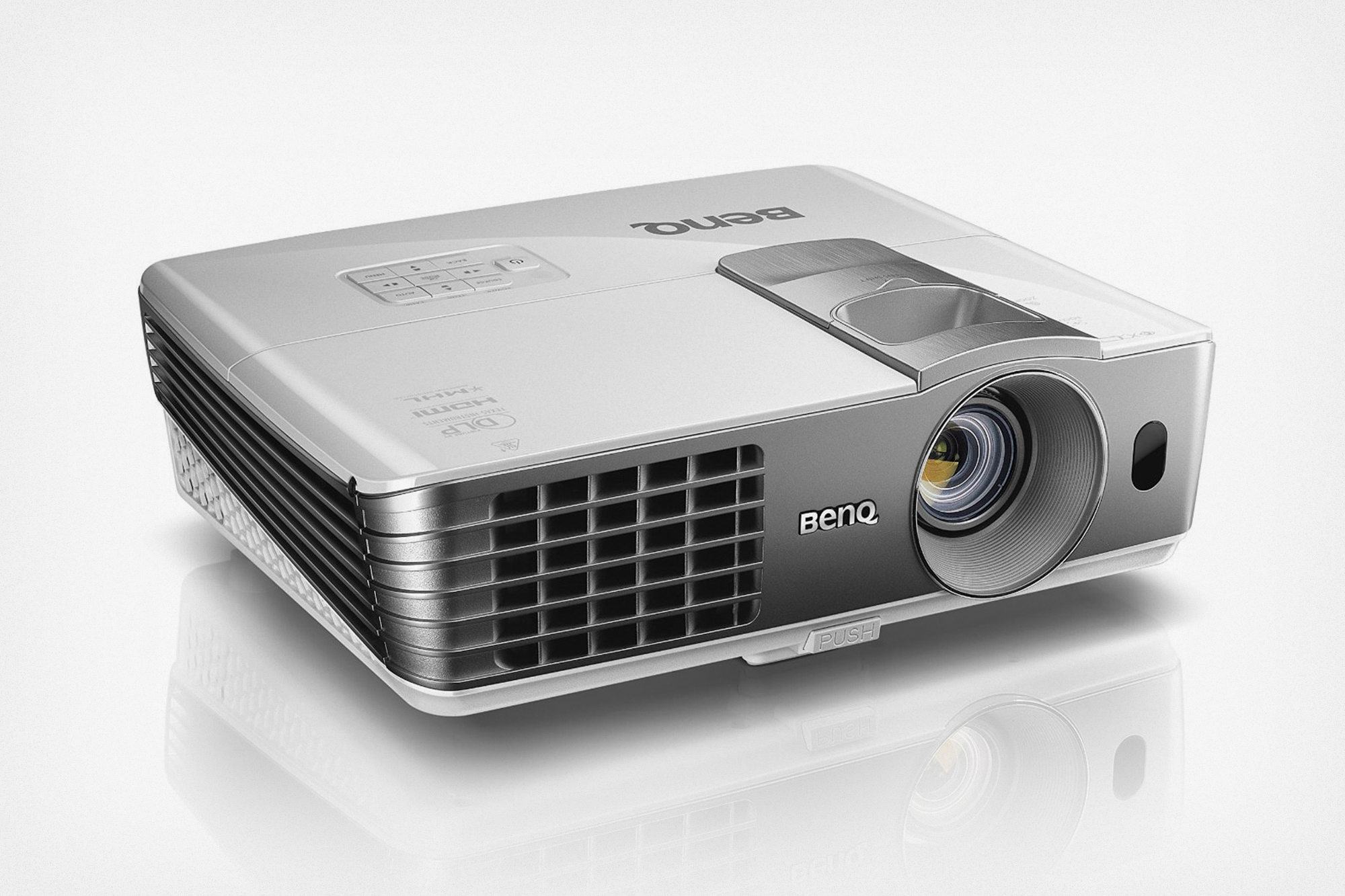 Aside from input lag, the BenQ HT1075 is very close in quality to our top pick.

The BenQ HT1075 was our prior pick and is what you should get if the HT2050 isn’t available. The models are close enough in performance—aside from input lag—that you won’t usually notice the difference unless they are side by side. The HT2050 has a little bit better contrast, its color is slightly more accurate, its input lag is lower (33 milliseconds vs. 49.7 milliseconds), and there’s a little less noise. Because performance is close enough that we don’t recommend anyone upgrade from one to the other, if the HT1075 goes on sale for at least $100 less than the HT2050, you should consider buying it.

A pick for smaller spaces 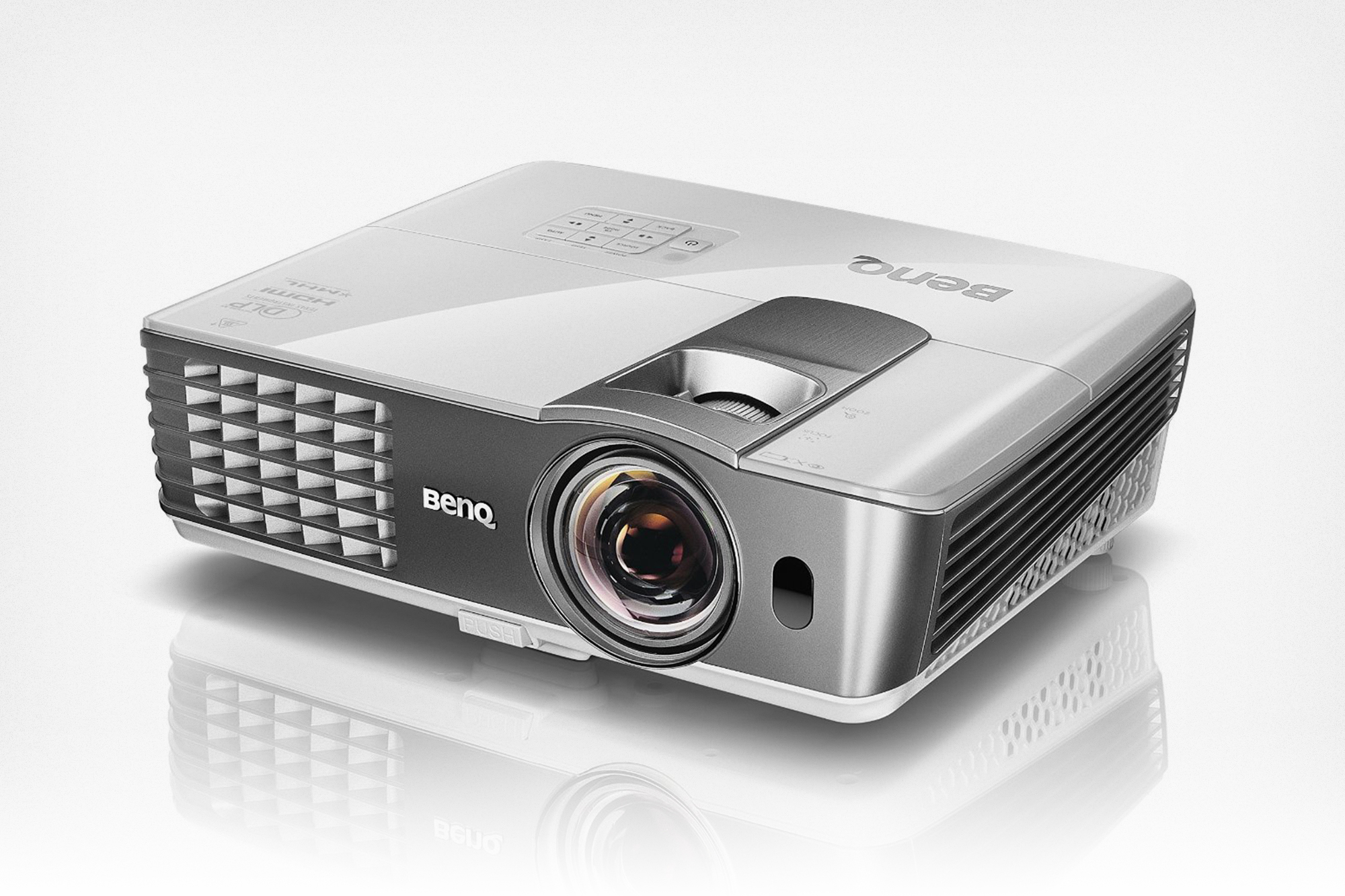 The BenQ HT1085ST is basically the same as the HT1075 but made to be placed roughly 40 percent closer to the screen.

If you have a smaller room (with the projector closer than 9 feet from a 100-inch or larger screen), or you want to place the projector closer to the screen and still have a big image (say, less than 5 feet for a 100-inch image), check out the BenQ HT1075’s short-throw sister model, the BenQ HT1085ST. The specs are basically the same, aside from the different lens. Check out the section on short-throws or ProjectorCentral.com’s great Projection Calculator Pro to see how well the projector fits in your room. 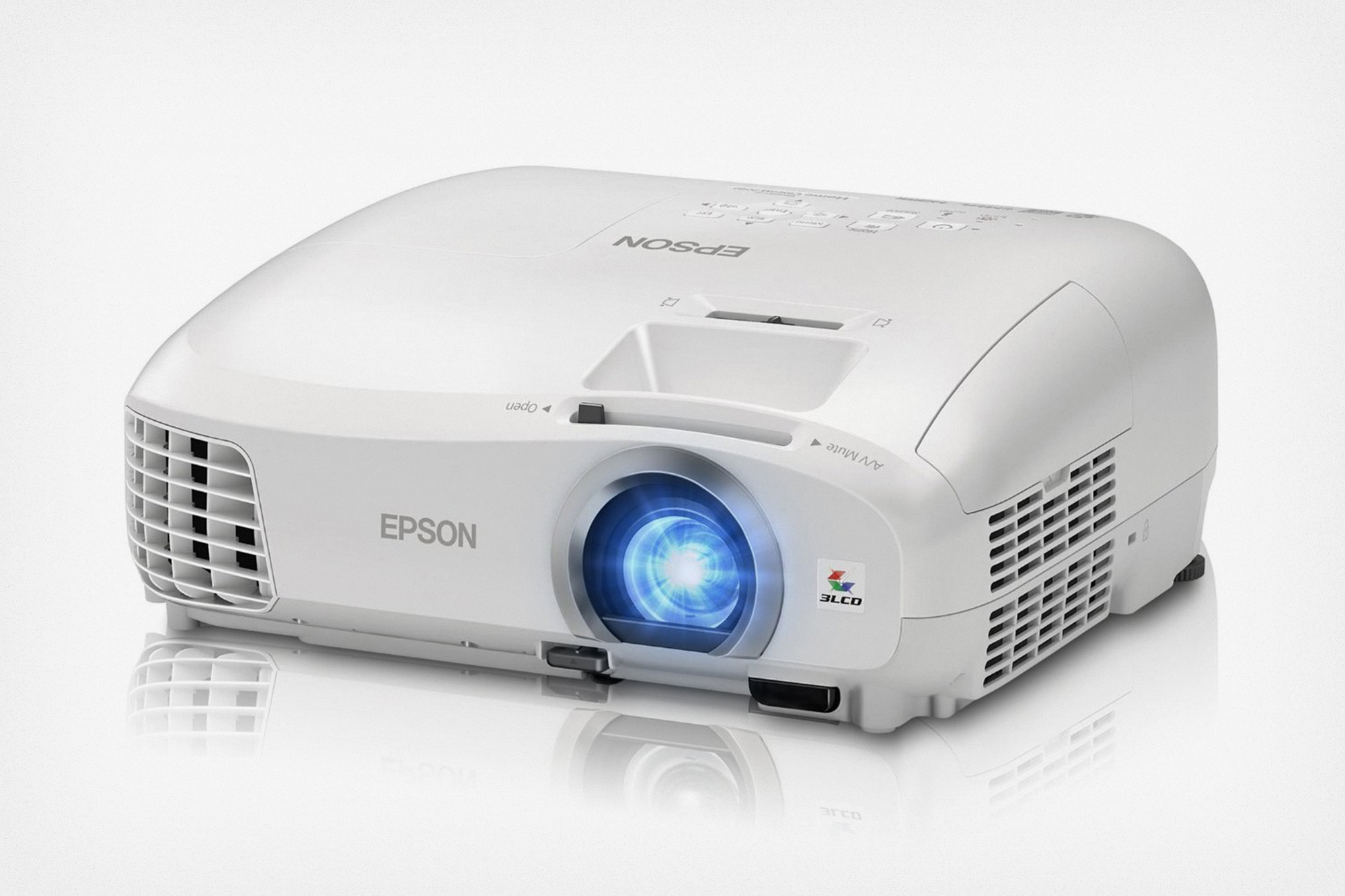 If rainbows are a concern for you, the Epson 2040 is a decent LCD pick.

The BenQ uses DLP technology, which creates artifacts known as “rainbows.” Most people don’t notice or aren’t bothered by them, but some people do and are. The Epson 2040 is based on LCD technology, so it won’t create rainbows. It’s also very bright, with a 27.8-millisecond input lag, but it offers a lower contrast ratio than the BenQ models and, because it uses three LCD panels instead of a single DLP panel, it isn’t as sharp.

Read more from News
News
← ​The ThinkPad X1 Tablet is like a Surface with a business twist
Everything you love will die, especially in tech →