The Samsung Galaxy S7 and S7 Edge have been out on the market for quite some time now. They are both great handsets (currently among the best), and you may be having a hard time trying to decide which one is worth your hard-earned cash. We are here to put these phones head-to-head and help you decide.

First things first: I want to let you know I will be approaching this comparison a little bit differently. Obviously, these smartphones share a lot of similarities, with only a few differences standing in between. For this reason, I will be discussing the similarities first, then I will move on to what sets them apart.

A lot of the similarities within these phones will lie within the actual hardware and internal specs. They are both powered by the Qualcomm Snapdragon 820 CPU, Adreno 530 GPU and 4 GB of RAM. Both handsets also come with alternative variants that are powered by Samsung’s own Exynos 8890 processor, which has an arguably inferior Mali GPU, and also comes with 4GB RAM.

They both have microSD card support, which just so happens to be a returning feature Samsung had dropped in the Galaxy S6 and Note 5 families last year. Samsung was made out to be a pariah for its decision to remove this feature so we know many of you will be happy about its return in the Galaxy S7 family. 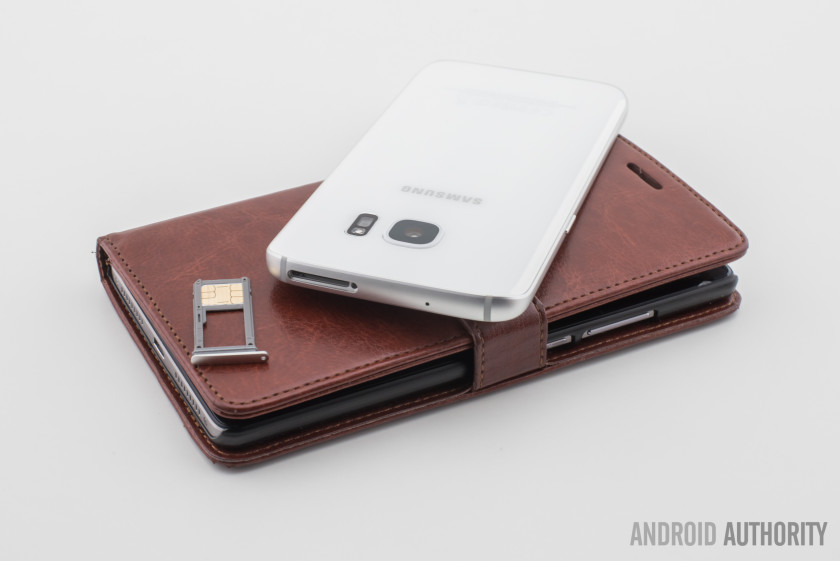 Both handsets are also resistant against water and dust (IP68), so you can totally dunk these phones into a toilet or use them during a storm. They should be safe during most wet situations you may encounter and while we don’t recommend testing it to the extreme, you can rest easy in the knowledge that getting caught in a sudden downpour or dropping your phone in the toilet won’t be the end for your shiny friend.

Fingerprint sensors continue to be embedded into the home button. As expected, they work almost flawlessly and are super fast to recognize your digits: you really should have no issue with this fingerprint sensor. 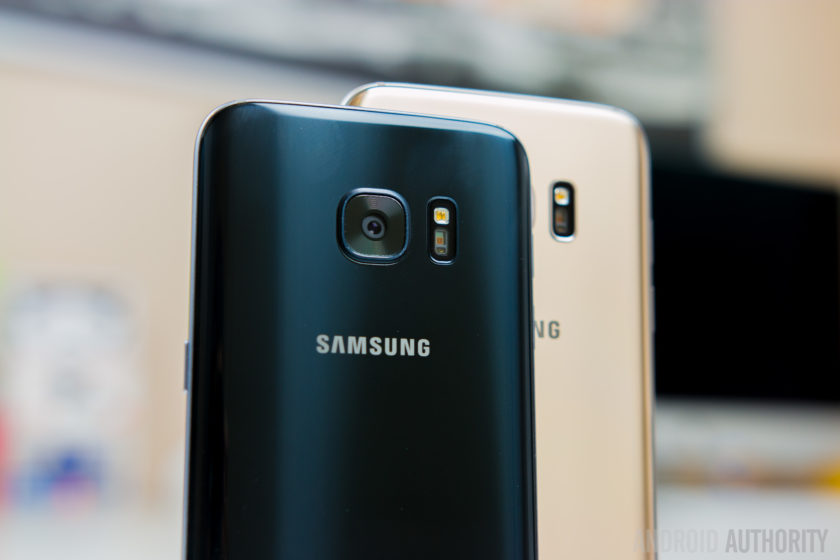 Another feature the Samsung Galaxy S7 and S7 Edge share is on the back – the camera. These phones sport a 12 MP sensor, which happens to be new and improved. Despite dropping down from 16 MP on the Samsung Galaxy S6, the new 12 MP camera sports 1.4-micron pixel size, an f/1.7 aperture and optical image stabilization (OIS).

Throw in the fact that they have dual-pixel auto-focusing technology and this makes for an amazing camera. This is seriously the fastest auto-focusing I have ever seen on a smartphone, hands down. 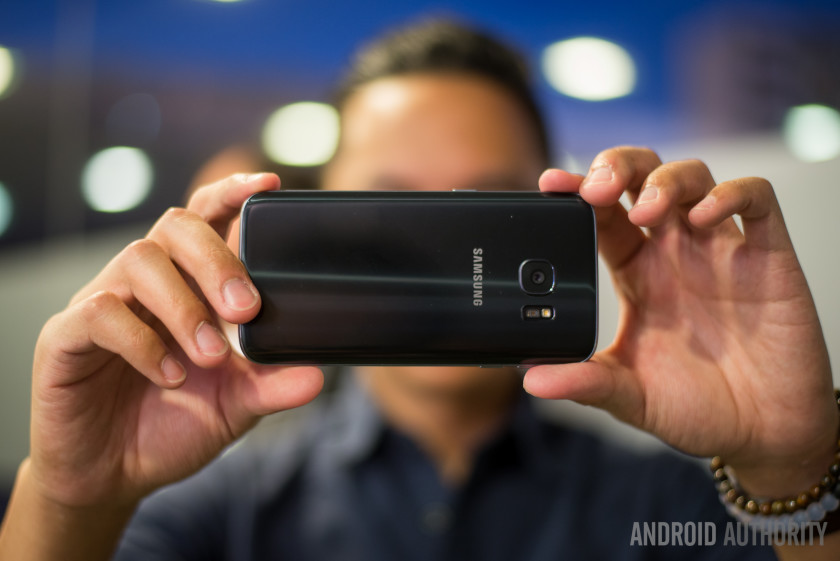 As far as actual photo quality goes, you should already know the Samsung Galaxy S7 and S7 Edge take amazing photos under any lighting conditions. It doesn’t matter what kind of mobile photographer you are, you will be able to take some amazing shots with both of these phones.

Is it the best smartphone camera on the market? That remains to be seen (you can check out our 7 phone camera shootout for a direct comparison) but it’s definitely one of the most reliable, in any lighting condition.

Some of these differences will have some similarities as well, but there is a reason why I put them in this section of the article (and video). 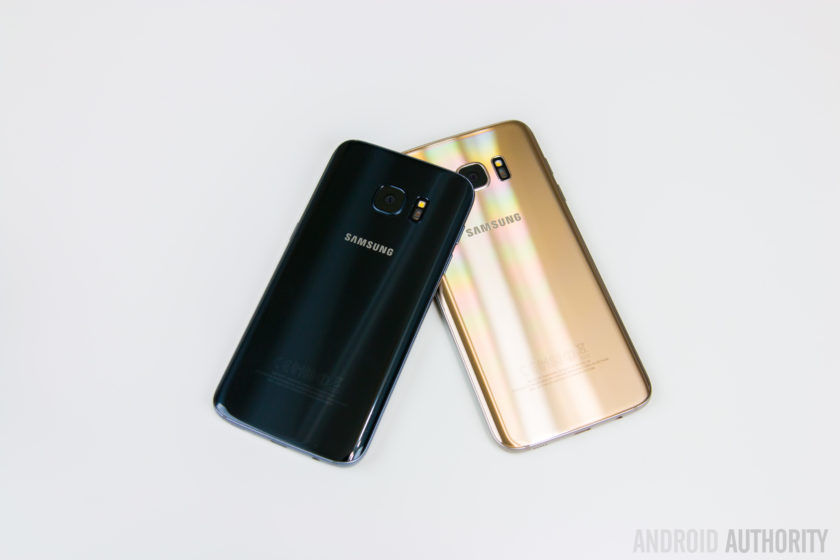 Let’s first talk about design. Both smartphones offer premium quality, made of glass and metal. But as it goes with anything made of glass, this also means they can be slippery and prone to keeping fingerprints around. With a few colors to choose from, some are more prone to displaying fingerprints than others but whichever color you go for, we recommend keeping a cloth handy to help wipe those fingerprints away.

The biggest difference is obviously the size of these gadgets. The Samsung Galaxy S7 Edge is a slightly bigger phone, due to the bigger 5.5-inch display. Despite the larger size, it doesn’t feel overly that much bigger, mainly because the display wrapping around the two edges decreases the bezel size and improves the ergonomic feel of the S7 Edge. 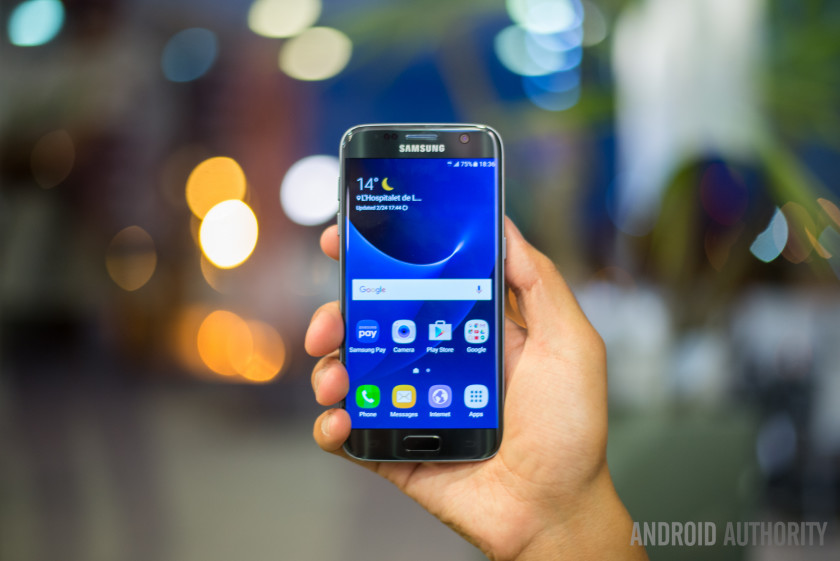 If you want a phone that is easier to grab with one hand, you will probably want to go with the regular Samsung Galaxy S7, which sports a smaller 5.1-inch screen. Those who want a phone with a large screen and that curved edge glass will likely gravitate towards the S7 Edge. Both feel very comfortable in the hand, but again, the Galaxy S7 is much simpler to handle.

That brings me to the next topic, which is the actual screen. Both handsets have a Quad HD (2560×1440) resolution and a Super AMOLED panel. The latter means you will be getting those awesome, vibrant colors, inky deep blacks and high contrast. The main difference in the displays is the actual size. The Galaxy S7 Edge’s larger size will offer a much better viewing experience when viewing movies, videos, images and games. 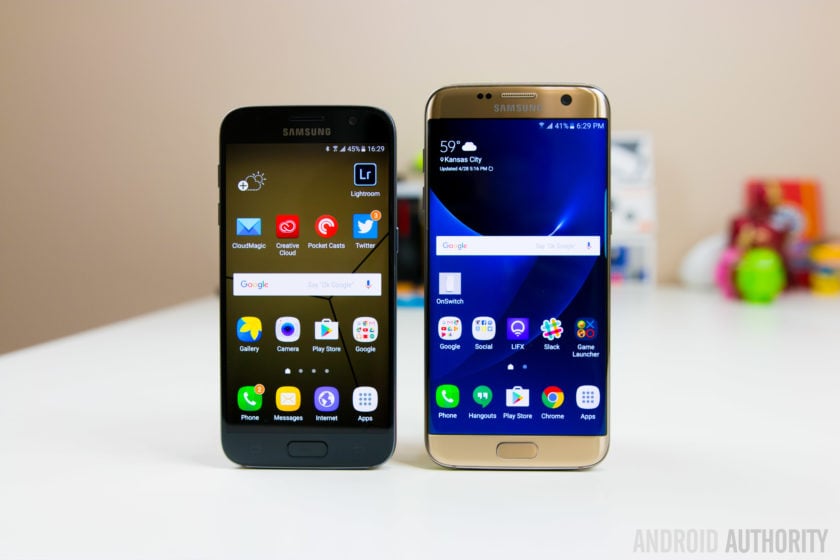 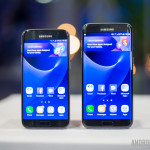 In our Galaxy S7 vs S7 Edge Battery Life showdown, we discovered that while the Galaxy S7 battery is certainly more than capable, the S7 Edge is streaks ahead of the competition. Compared to other flagships (such as the HTC 10, LG G5 and Nexus 6P), the Galaxy S7 is on par but the S7 Edge lasts 20 to 30 percent longer. 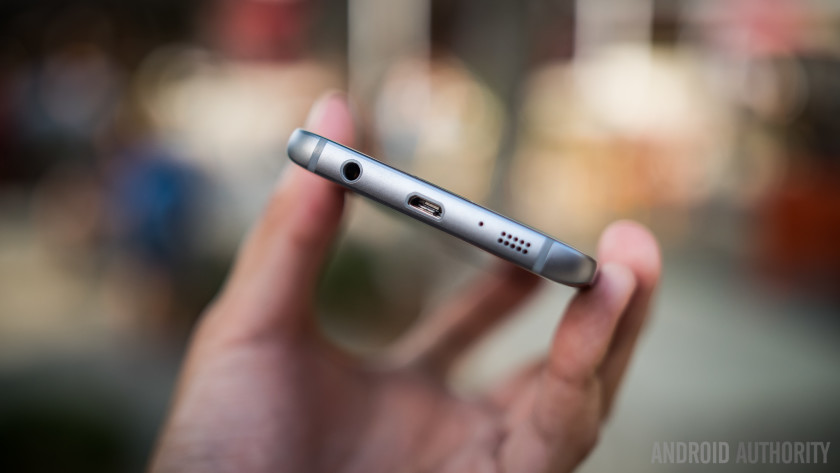 Now, the regular S7 gets pretty good battery life too, but keep in mind it won’t be anywhere near Galaxy S7 Edge territory. Both do have wireless charging, as well as fast charging, though, so you can take advantage of these features when your battery is running low.

Alright, let’s talk a little bit about the software. I won’t be going to much into detail about the software here, as you can read our Galaxy S7 and Galaxy S7 Edge reviews to learn more. Both devices run on Android 6.0 Marshmallow with TouchWiz on top and, for the most part, the overall experience between these two phones will be pretty much identical. 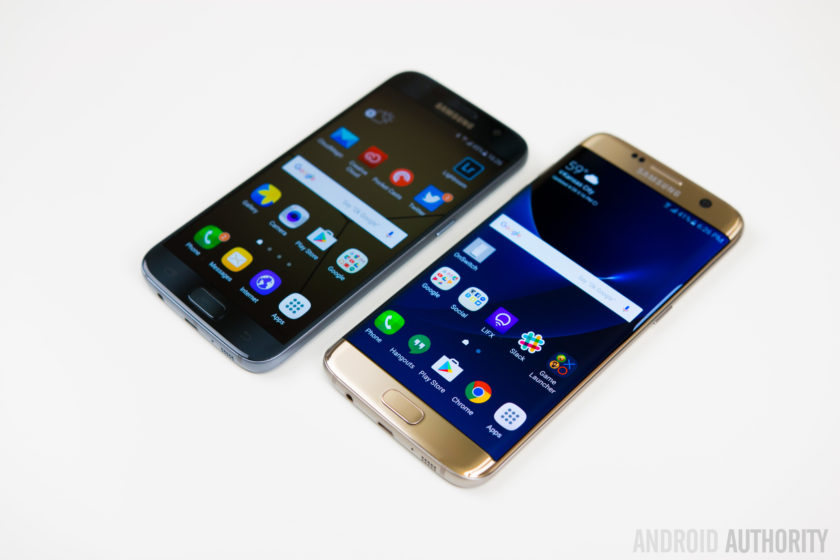 Both have features like Multi-Window, palm swipe to capture and all the other gestures. A lot of the same applications are also present on both units, such as S Voice and S Planner. The icons look extremely cartoonish and bright, but you can change that with the theme store, which now has hundreds (if not thousands) of themes to choose from. 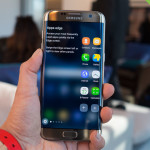 Where are the software differences? Pretty much only in the Edge features the larger phone offers. The Samsung Galaxy S7 Edge has things like the Apps Edge, People Edge, Tasks Edge and more. These come off the side of the phone with a simple swipe and can be quite useful, even though they do require some getting used to. They can show you information such as sports scores, stocks, the weather and more. 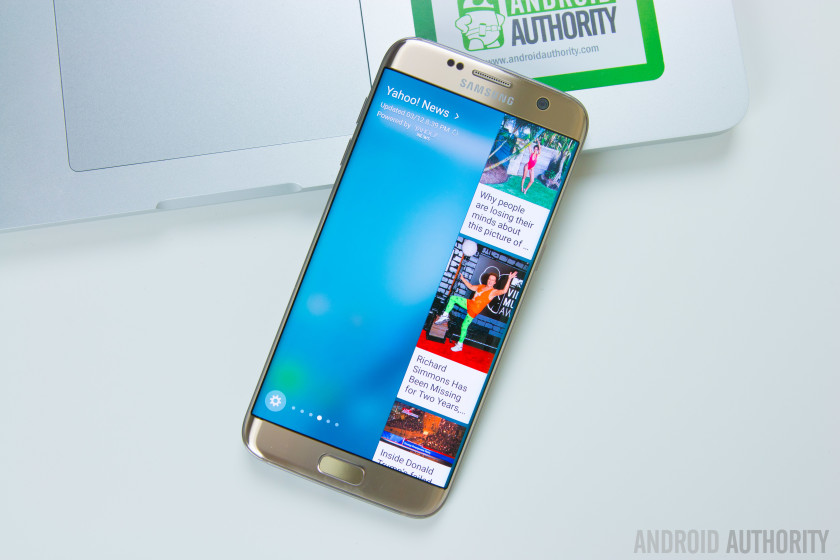 The final (and probably biggest) difference between the Galaxy S7 and S7 Edge is the price. The Samsung Galaxy S7 Edge costs an extra $100 over the Galaxy S7. You will pretty much have to ask yourself if the extra features, like the bigger display, longer battery life and edge functionality, are worth those extra 100 bucks to you. 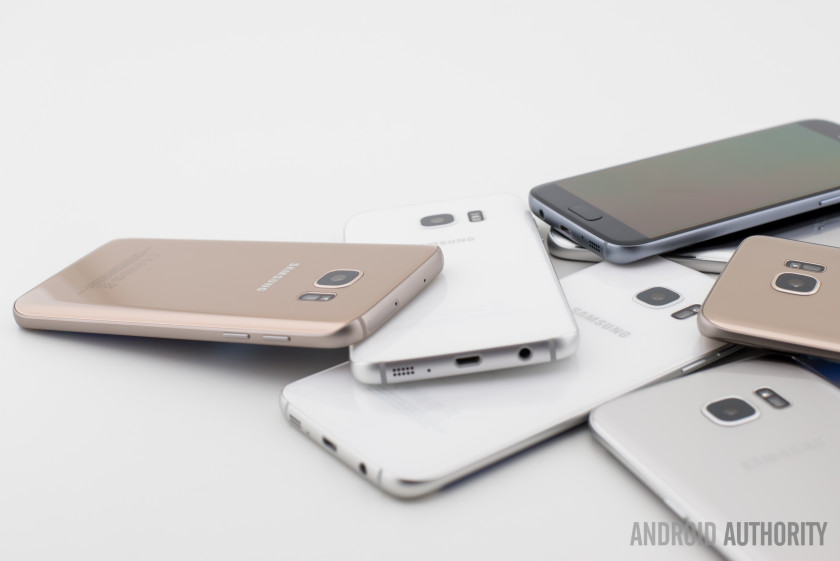 For some people, these improvements may totally be worth the extra cash; for others, it might not. Also, some of you may just prefer the smaller size and better one-handed usability the Samsung galaxy S7 offers. It all comes down to what you really need or want out of a smartphone, but whichever you choose, there’s no denying that the Galaxy S7 and Galaxy S7 Edge are worthy of your money.

So, tell us, which phone do you prefer? Is it the smaller, more manageable Galaxy S7? Or does the powerhouse Galaxy S7 Edge tickle your fancy? Vote in the poll and let us know your views in the comments below!

Note: There is a poll embedded within this post, please visit the site to participate in this post’s poll.