I’ve never been particularly fond of spin classes, as they eschew all the things I enjoy about using a stationary bike: The ability to set my own pace, listen to my music and maybe even dip into a good book while I pedal. But I can understand the appeal of a spin class, as the presence of an instructor can push you out of your comfort zone and ensure that you get a real workout. So it would seem that IMAXShift sits somewhere in the middle, combining an intense audio and visual experience to entertain you while a dedicated instructor gives orders. The problem is, there might have been just little too much going on for me to enjoy any one aspect to the fullest.

There’s been a general trend of consumers moving away from big box, one-size-fits-all gyms toward a more boutique, personalized model of gym exercise. Sometimes boutique means just smaller, but in many cases it means some kind of specialization or gimmick of some sort. IMAXShift looks to draw spin enthusiasts to its debut location near downtown Brooklyn via a 24-by-40-foot curved screen combined with a robust IMAX sound system. Two sub-basses are even buried under the floor for that extra bit of oomph as you pedal. There are 50 stationary bikes across five steps, arrayed in a gentle arc.

Though the gym uses IMAX technology for its audiovisual elements and the company wants to do for fitness what it has done for movies in delivering “larger than life experiences,” you won’t be watching Star Wars or The Jungle Book while you pedal. Instead, each spin program is composed of a series of shorter video segments chosen by each individual instructor. The idea is that each class can be unique and you should never see the same sequence twice. The visuals I was treated to during my session included pulses of bright colors in abstract shapes, shifting black and white lines, and a grand sweep over a lush green forest set to Prince’s “When Doves Cry.” As evidenced by that last example, there wasn’t really a close thematic correlation between the music and visuals. 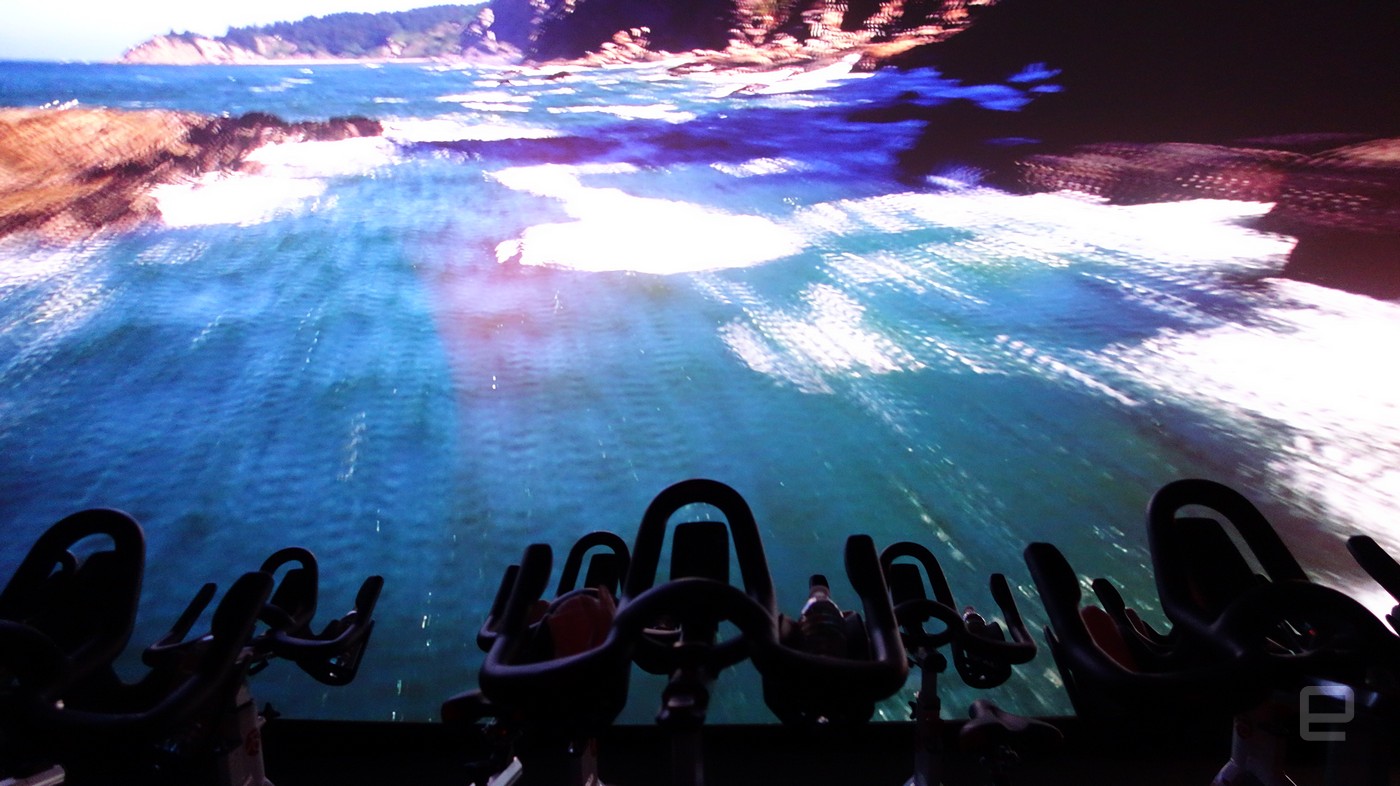 Even if there was, I might have missed it completely due to being overwhelmed by the sheer number of things going on in the IMAXShift theater. As I hopped on my own bike and began my own class with a group of roughly 20 people, I found myself so preoccupied with my spin routine that it was hard to focus on the images. The instructor for our session, Jesse Alexander, barked out instructions steadily, meaning I was constantly fiddling with the bike’s resistance, checking my revolutions per minute on its built-in console and overall trying not to hurt myself as I peddled faster, slower, stood up, sat down, straddled the seat and whatever else my cycling master demanded of me.

It didn’t help that sometimes the music would occasionally drown out Jesse as he was giving us a new order, meaning I spent a lot of time watching him or the other cyclists to figure out what I was supposed to be doing. Quite a few of them weren’t looking up either; one woman I spoke to the locker room afterward even said she eventually just stopped paying attention to the screen entirely. 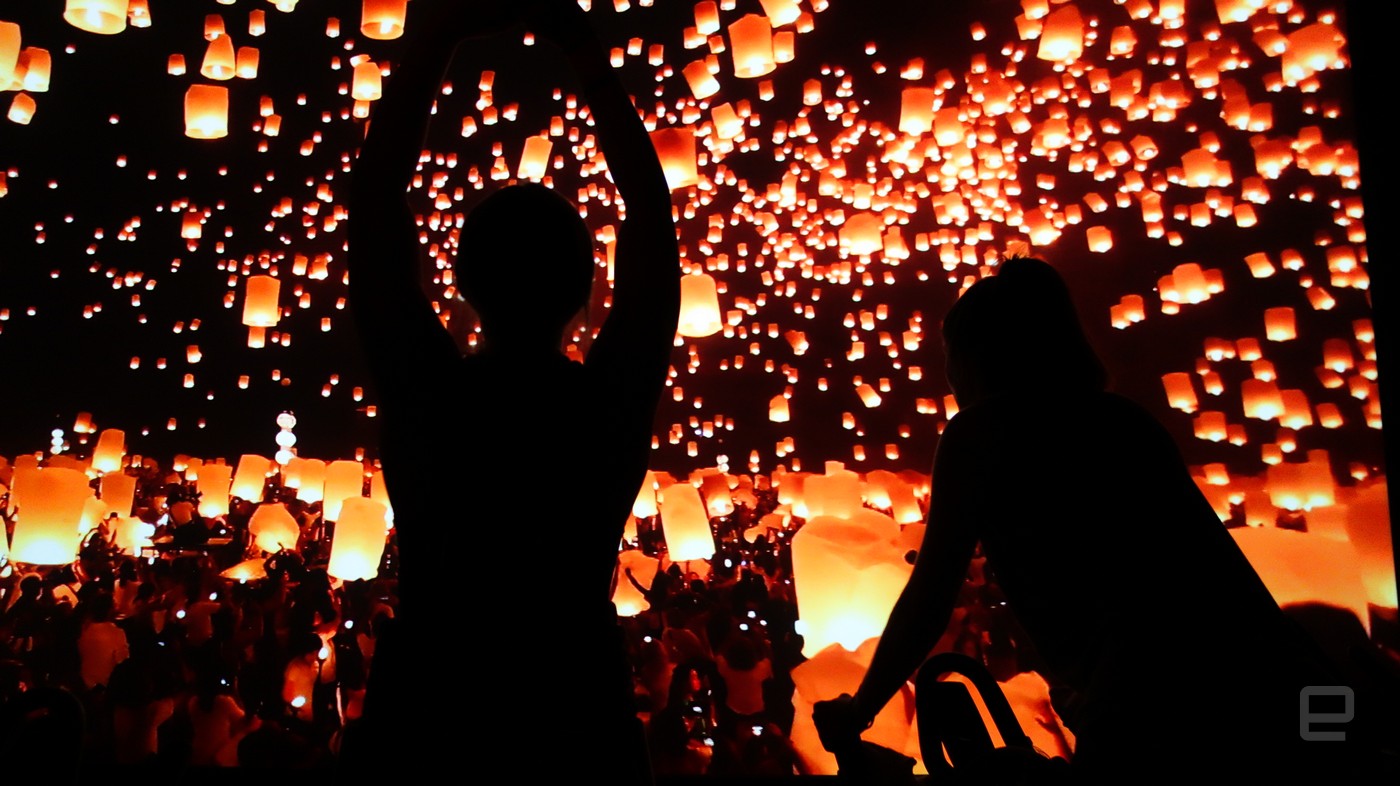 As the class wound down to the strains of Hans Zimmer’s “Time” I finally had enough wherewithal to take in a lovely visual of sky lanterns floating upward into the night. It was peaceful, and for a minute there I felt pretty good about having completed the entire workout. But I’m not entirely sure if it’s something I’d want to do again. The price isn’t a huge issue, as a single ride will cost $34, on par with established chains like SoulCycle.

However, replacing the usual mirror with a giant screen might eliminate any shame or other issues you might have with staring at yourself for 30 minutes, it also creates an enormous sense of isolation. There’s so much going on the room that it’s tough to engage with anything: Not the screen, not the instructor and certainly not the other cyclists, who exist as shadows in the corner of your eye when the lights go down. The music sort of blots out everything to the point where it becomes a form of white noise. I might have given my quadriceps, hamstrings and glutes a good workout today, but the part of me that’s most exhausted is my mind. I feel like a kid after a carnival: overstimulated and in serious need of a nap.

Read more from News
← MacRumors 2016 Blood Drive
The After Math: What on Earth are you watching? →