Two stellar phones, with overlapping specs. No wonder folks are getting so excited.

Without a doubt one of the more … discussed … announcements at Mobile World Congress this year was the LG G5. If you’re only looking at the specs, on paper, it might seem like a slight step backward in a mobile world that’s always going bigger and faster. But get the G5 into your hands, and things change a bit. It’s very nicely designed. That’s not to say there aren’t questions about real-world use — how often will we use the dual rear cameras, for instance.

And, of course, there are the optional modules — one that adds a camera grip, some physical buttons for shooting, and an extended battery; another for high-definition audio.

One of the more vocal questions we’ve heard about all this has come from those who currently own the flagship of LG’s other line — that’d be the V10. So let’s take a quick look. 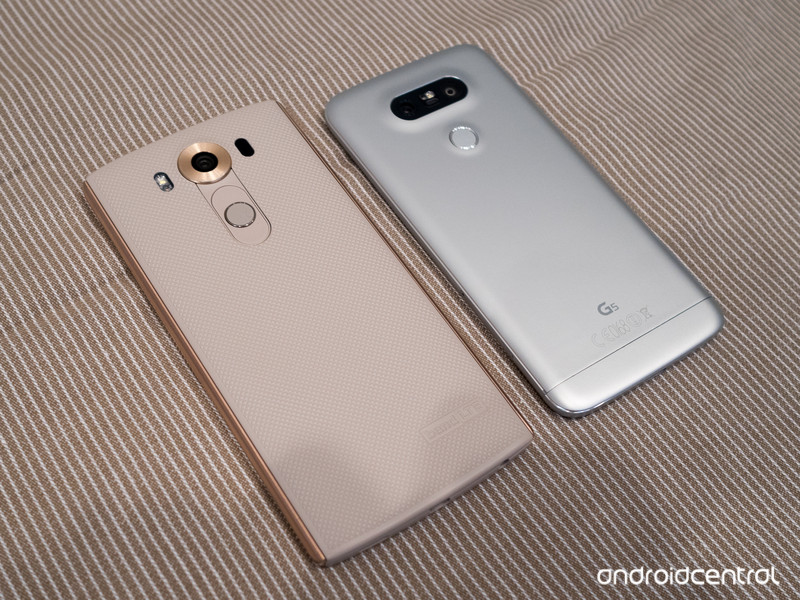 The biggest difference between the G5 and the V10 is, of course, size. The V10 is a large phone by anyone’s standards. But it’s also a very well-designed large phone, and it feels like a tank. The G5 is a full centimeter shorter. (That’s not a unit of measurement we get to use too often around here.) It’s a little more than a half-centimeter more narrow. The display is a good bit smaller. So for many folks this is going to be a more manageable phone.

The LG V10 and the LG G5 aren’t as different as you might think. But each has its place.

There’s been a lot of hemming and hawing over the smaller battery in the G5. It’s all of 6 percent smaller than the battery on the V10 (and the LG G4, for that matter). Just 6 percent — and in a much smaller size. We’ve got to wait until we get to spend more time on the phone before we can comment on what sort of real-world battery life to expect, but the Snapdragon 820 in the G5 is, on paper anyway, supposed to be even more energy efficient. So maybe it’ll be a wash. Maybe it won’t be. But it’s premature to write off the G5 just because of a 6 percent difference in stock battery capacity.

Other than the size, the display isn’t a big departure from the V10. I didn’t think the V10’s secondary display was perfectly implemented (though it was an interesting idea), and maybe you’d miss it on the G5. On the other hand, the G5 gets an always-on display that’ll give you a little more information all the time, too.

Then there’s the matter of high-definition, 32-bit audio, via a B&O-powered digital-to-analog converter. The V10 does that out of the box (minus the B&O part). It’s built into the phone. The G5 can make use of an optional module that replaces the stock bottom of the phone. The plus side is that the DAC module outputs everything in 32-bit, not just certain apps. And it’s relatively small for what it does. The down side is that we have no idea how much this module is going to cost yet. That’s a big question mark.

Remember that the V10 is the start of a new line for LG, though, with its phones being meant more for content creators. And as such it has full manual control over video recording. The G5 doesn’t. That’s probably not a deal-breaker, but it is a really cool feature we’d love to see expand.

And we still have a lot of questions about the G5 itself. I’ve not seen anything yet that inherently rules it out. It’s different than the V10. Better? Worse? That’ll be your call.

Read more from News
← The After Math: You take the good with the bad
Mobile Nations Weekly: Mobile World Crazy →