Google has added their Glass Explorer Edition to the US play Store today, negating the need for the dedicated sign-up and order page that they previously had it listed on. The selling price still remains at $1500 and is offered in a variety of colors, 5 to be exact, to make them a little more fitting to your style plus you get a free frame or shade with your purchase.

The Play Store page also has the various accessories available to purchase individually. Those include frames, 4 style options, for your prescriptions lenses ($225), Shades in 3 styles ($150) and the Stereo or Mono Earbuds ($85).

Head on into the Play Store to take a look and get an order placed if you do so desire.

With just four days to go until we get our first look at Apple’s wearable device, rumors are ramping up. New information suggests the iWatch will have a curved, flexible OLED display covered in sapphire, NFC support, and wireless charging capabilities. Check out our roundup for all of the latest rumors. 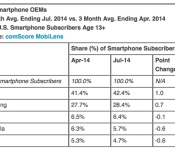 As the launch of the iPhone 6 approaches, Apple continues to hold its title as the number one handset manufacturer among consumers in the United States, making significant gains in share during the three month period ending in July.

According to ComScore’s latest numbers, the iPhone had a 42.4 percent share of the market, up from 41.4 percent in April. Samsung also saw small gains, jumping to 28.4 percent from 27.7 percent in April. Meanwhile, LG, Motorola, and HTC lost share, a trend that’s been ongoing for several months.

While Apple is the top handset maker, iOS has always fallen behind Android when it comes to operating system share, due to the large number of Android-based phones on the market. Apple did make headway during the July period, however, as Android lost share, dropping to 51.5 percent from 52.5 percent during the April period. iOS, meanwhile, jumped from 41.4 percent share to 42.4 percent share.

iOS is the only platform that continues to gain significant ground, with BlackBerry and Symbian losing share while Microsoft gained 0.3 percentage points.

It will be interesting to watch ComScore’s numbers in the coming months, as Apple may see gains in both handset and operating system share. The company is preparing to launch the iPhone 6, which will offer larger displays of 4.7 and 5.5-inches. Display size has been one of the major features differentiating the iPhone from larger Android phones, and the increase in size may encourage a number of Android users to switch to Apple’s platform.

Because ComScore’s data tracks installed user base rather than new handset sales, it is more reflective of real-world usage but slower to respond to shifting market trends than some other studies. 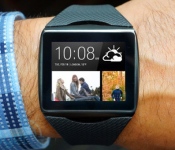 HTC reportedly pulls the plug on its smartwatch

These days it seems like nearly every smartphone maker also has a smartwatch under its belt? Motorola? Sure. LG? It’s got two. Samsung? We don’t even need to go there. HTC has generally seemed content to avoid the fray, but according to a report from Pocket-Lint it wasn’t because they wanted to. The company planned to launch a smartwatch of its own before shelving the idea thanks to ballooning costs and a dearth of pizzazz — we reached out to the company, which declined to comment. Earlier reports suggested that HTC was shopping around a wearable prototype that used one of Qualcomm’s Mirasol displays — they’re low-powered color screens that offer pretty impressive legibility in broad daylight, but they never quite caught on with gadget makers. As always, you’ll want to take those findings with a grain of salt, but if true HTC almost assuredly made the right decision. There’s a surge of Android Wear smartwatches come out of IFA, Apple’s got a wearable of its own barreling down the pipeline and there’s no clear indicator that the masses actually want these things on their wrists. For HTC (and other companies weighing their options), the winning move may be to not play the game.

This levitating Bluetooth speaker is the best we’ve seen

When I met with OM Audio in Manhattan to check out what the company was calling the “world’s first levitating Bluetooth speaker,” I didn’t bat an eye. I had never myself seen a levitating speaker before that day, and a thorough internet search turned up nil. As it turns out, a Taiwanese company has been showing off a very similar (albeit non-functioning) device for months. ASWY, based in Taipei, is here at IFA in Berlin demoing a production-ready version of its own speaker, which at this stage looks much more polished than the OM Audio prototype I saw last month. Audio quality is quite good, as well, and while a noisy trade show floor isn’t the best place to test a speaker, it sounded better than the OM model I was able to experience in a silent room.

ASWY’s product, simply called the Floating Bluetooth Speaker, has three watts of output, five hours of battery life and Bluetooth 4.0 support. You can also plug an audio source directly into the 3.5mm input, and, since there’s an integrated mic, you can use the device as a speakerphone as well. Like with OM Audio’s version, you’ll need to use a powered base to keep the speaker in the air, but it’ll operate untethered as well. The base also includes an integrated USB port, so you don’t need to use a secondary adapter to charge up the device (though you can if you like). ASWY reps expect distributors to sell the speaker for $149 beginning this November. Check out the demo video below to get a feel for how it works — we captured the audio straight from a mic attached to an Olympus E-M1 camera, and for a portable Bluetooth speaker, it really does sound good.

Hey you guys, I love messaging with just emojis. It’s the best. They let people know how I really feel when tone is so hard to convey in a text or email. Those quick notes are great, but I really want the cute pics to be in my life more, so I’ve started logging my location and activities with Steven. It’s a new app built by former Twitter Chief Scientist Abdur Chowdhury that tracks where I go in the background on my iPhone and records the appropriate icon. Don’t worry, it’s not creepy or anything — it’s totally cool. Coffee shops get a coffee cup, drowning my sorrows gets a beer mug, etc… It’s pretty great. I can also assign my smartphone snapshots to those places and all my pals can give emjoi-based comments on the burrito I had for lunch. I mean, it’s named after a cat. What’s not to love? 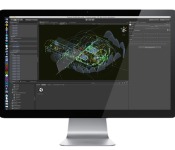 The Dynamic Dev Power Bundle: Over 170 hours of development tutorials $59 [Deal of the Day]

If you’ve had even a passing thought about diving into the development game, this bundle couldn’t have come at a better time. The Dynamic Dev Power Bundle charges through deals.androidguys.com at a massive 92% off, giving you access to:

Perfect for those interested in developing games, apps, or for the web, this bundle offers lifetime access to over 170 hours of content and course materials. Don’t worry about outdated lessons as you’ll also receive access to free course updates.

Check this deal out, and many others at deals.androidguys.com!

The post The Dynamic Dev Power Bundle: Over 170 hours of development tutorials $59 [Deal of the Day] appeared first on AndroidGuys.

Sony announced their new portfolio of devices yesterady, Sony Xperia Z3, Xperia Z3 Compact, Xperia Z3 Tablet Compact and Xperia E3. Xpera Z3 is Sony’s new flagship device and comes with a Snapdragon 801 processor, 3GB of RAM and 16 or 32GB of internal storage (expandable via MicroSD card up to 128GB). The device sports a 5.2-inch 1080p (1920 x 1080) IPS LCD Triluminous display and comes with a 3100mAh non-removable battery. On the back of the device you can find a 20.7-megapixel camera while there’s a 2.2-megapixel shooter on the front. The Xperia Z3 comes with Android 4.4.4 KitKat out of the box with Sony’s very own UI on top of it. Click here for more information.

I know many of you would love to get your hands on Xperia Z3 wallpapers, you can do so by following THIS link. There are 35 wallpapers for you to check out when you download the pack, be warned though, it’s kind of a big download due to the amount of wallpapers. Enjoy!

This ultra-clear screen protector for your Samsung Galaxy S4 offers a bubble-free and easy installation. All purchases come with a lifetime warranty and the reviews are through the roof. At less than eight bucks (Prime eligible), this is a great buy for those looking to protect those beautiful screens. 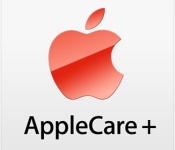 AppleCare+ for iPad, iPhone, and iPod is set to debut in Australia in the near future, perhaps ahead of the launch of the iPhone 6 in the country. According to a tipster who spoke to MacRumors, Apple Store employees in Australia are currently receiving training on the service.

AppleCare+ for iPhone originally launched in the U.S. in 2011, offering two years of extended warranty protection along with for two accidental damage incidents (with a $79 service fee).

The program expanded to include the iPad in 2012, and since then, Apple has rolled out AppleCare+ coverage in a number of countries including Canada, China, Japan, Singapore, Mexico, United Arab Emirates, and several countries across Europe.

Currently, customers in Australia are limited to standard AppleCare protection for the iPad and the iPhone, which provides two years of additional coverage but does not include accidental damage replacements. Pricing on AppleCare+ in Australia has not yet been divulged, but it will likely be similar to pricing in the United States, which is $99.