If you want your Samsung Galaxy S II to stand out from the crowd, but don’t fancy adding a physical QWERTY as per the AT&T variant, then how about a white version of the massively popular handset?

That dream (yes, dream) is now a reality as web rumours and leaked pics have led to official confirmation from Samsung. The Galaxy S II white edition exists and what’s more it’s going on sale in just over a month.

Simon Stanford, MD of mobile at Samsung UK and Ireland said: “Sales of the Galaxy S II have surpassed all expectations since its release in May this year. The arrival of the Samsung Galaxy S II white brings to market an incredibly stylish addition to our latest multi-award winning handset.

“The Galaxy S II is our slimmest, lightest, fastest and now whitest smartphone, the first device to offer Super AMOLED Plus screen technology, alongside the most advanced technical specifications including the latest Android OS and a dual core processor.”

We’ve seen it before, but not against one of its chief rivals: the Samsung Galaxy Tab 10.1. Now here they are, sharing a little table space — but not getting along too well. On one hand the Tab 10.1 is thin and light on its feet. On the other, the ThinkPad Tablet is large and would very much like to be in charge of your corporate lifestyle. Due to Honeycomb’s limited customizations, Lenovo’s tackling this angle thanks in large part to some enterprise- and stylus-friendly software, much of which the device comes with pre-installed. Join us after the break for a quick demonstration, plus a look back at our first hands-on with the thing. 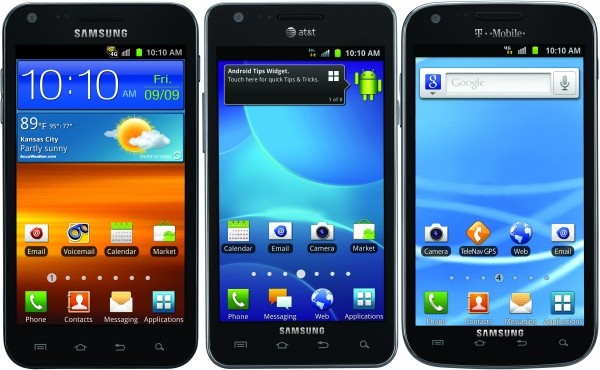 Well, its been a long time coming, but you fine folks living in the good ol U-S-of-A are finally getting blessed with Galaxy S IIs to call your own. Conspicuously missing from the party is Verizon, but Sprint, T-Mobile and AT&T are all getting in on the Super AMOLED Plus action under the guise of the Epic 4G Touch on Sprint and just plain old Galaxy S II on AT&T and T-Mo. As we had heard earlier the Epic 4G Touch is sporting a slightly larger 4.52-inch screen as will the T-Mobile variant, while AT&T is sticking with the 4.3-inch panel found on the international model. Sprint customers will be first to get their shot at owning one on September 16th for $200, with AT&T and T-Mobile a little further down the road. Otherwise there are very few surprises here, with a 1.2GHz Exynos pushing Gingerbread and TouchWiz to each gorgeous screen. All are packing 16GB of internal storage and being pitched as 4G handsets — with WiMax on board the Sprint model and HSPA+ for T-Mo and AT&T. Ma Bells is specifically championing its variant as the “thinnest 4G smartphone,” which might have something to do with the smaller 1650 mAh battery inside the Epic 4G Touch is sporting an 1800 mAh pack.