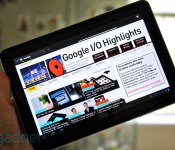 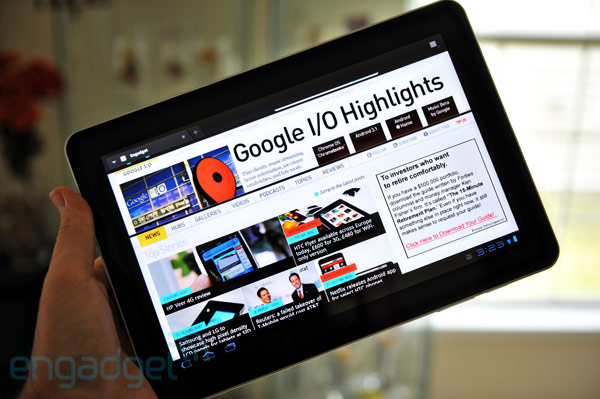 It may be a bit difficult to pay attention to the spate of Honeycomb tablets that seem to be popping up left, right and center — you know, now that Ice Cream Sandwich has been officially promised — but what’s not easy to overlook is an 8.6mm slate. Checking in at a sliver of a pinch thinner than the illustrious iPad 2, Samsung’s rethought-out, redesigned and definitely-not-renamed Galaxy Tab 10.1 is the first Android tablet to date that seriously goes toe-to-toe with Apple in both specifications and design. Granted, the consumer models aren’t slated to ship out until June 8th, but given that Google handed us one last week during its annual I/O conference, we figured we’d spend the following weekend wisely. You know, photographing, benchmarking and testing this thing to the hilt. (Of note, the unit tested here was the Limited Edition model, devoid of TouchWiz, 3G and a microSD card slot, but is otherwise identical to shipping units aside from the design on the rear.)

The Tab 10.1 — not to be confused with the older, since-relabeled Tab 10.1v — weighs just 1.31 pounds (marginally besting the iPad 2’s 1.33 pound chassis), and if looks could kill, few people would’ve made it out of Moscone West with all organs functional. But as you well know, style only gets you in the door — it’s the guts, the software, and the marriage of it all that makes or breaks the tablet experience. Hop on past the jump to find out why we think Samsung truly delivered on the promise of a Google-powered tablet, and why you should all seriously consider socking away funds as early June approaches.