BitTorrent’s Live video streaming experiment is ready to go wherever you do. The peer-to-peer app is available right this instant on iOS, and, as you might expect it’s 100 percent free. As with the Apple TV app, there isn’t a lot to choose from as far as viewing material goes, however.

If you’re a fan of DJ music, there’s a channel for that (Clubbing TV), in addition to NASA TV, pro rugby, a handful of news stations and a few others. Our friends over at This Week in Tech have a channel as well. In my brief tests, video quality looked good and audio, something that streaming services can have a hard time with, was solid on Clubbing TV. There were a few hiccups here and there where sound dropped out for a fraction of a second, but the cuts were few and far enough between that I wasn’t tempted to change the station.

Since it’s free, you’re not out anything for giving it a go yourself. Aside from some battery life and data, of course. Who knows, maybe you’ll find something to like. Anything’s possible!

‘Pokemon Go’ gives you more goodies for the holidays

One of the reasons why Pokemon Go was such a success is because it got people out and about during the summer. Now that winter is settling in and the snow is starting to fall, however, the developers at Niantic Labs have to figure out a way to keep people playing. Beginning on Christmas Day morning, Pokestops will dole out a single-use incubator. More than that, until January 3rd you’ll have a better chance of finding Togepi, Pichu and other Johto-based eggs.

To further celebrate the season Pikachu wearing Santa hats are going to be a thing as well. An adorable thing that will stick around a bit longer. Need more reason to brave the unforgiving tundra your neighborhood has become? Come December 30th, finding the original starting Pokemon (Bulbasaur, Charmander, Squirtle and their subsequent evolutions) will be easier too, according to a press release from the company.

To give you a leg up in finding them, Lure Modules will double their lifespan and last for an hour. These bits only last through January 8th, though, so time is of the essence. But hey, now you have a valid excuse for taking a walk when your family members are on your last nerve. 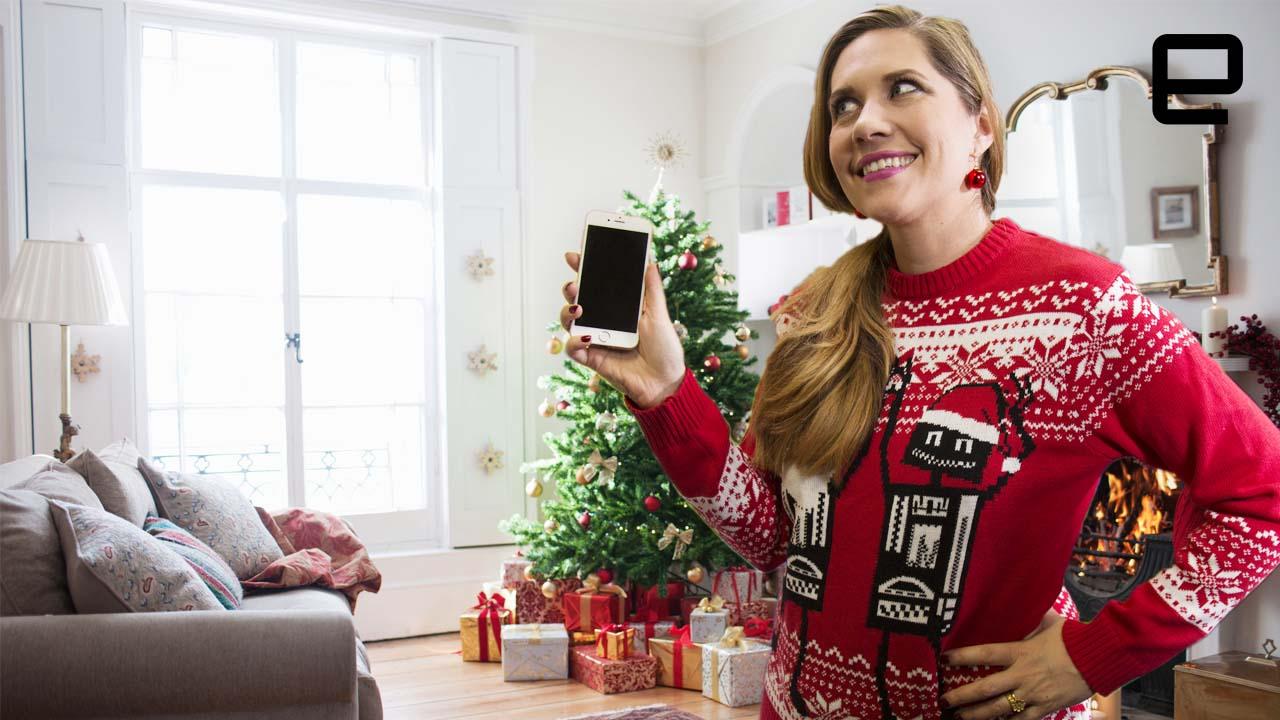 Today on In Case You Missed It: It’s our holiday episode and what better way to celebrate than with Mark Zuckerberg, Priscilla, their baby and mop dog? The Zuck is taking people inside his home for a look at the home automation system he programmed himself, using Facebook programming tools. He shows off his shirt launcher, text to dim the lights, facial recognition and more in the video, though the funniest (yet cruelest) moment may be the Zuck’s trolling of oft-hated on rock band Nickelback.

We were lucky to find this The Mummy IMAX trailer before Paramount scrubbed the mistake from the internets. Take in Tom Cruise’s screams as my holiday gift to you. There are some great stories in TL;DR but we most recommend reading up on the Electronic Frontier Foundation’s full-page ad to the Trump Administration. As always, please share any interesting tech or science videos you find by using the #ICYMI hashtag on Twitter for @mskerryd.


In this week’s episode guest host Devindra Hardawar is joined by managing editor Dana Wollman and senior editor Chris Velazco as they run through the biggest winners of 2016. While it might have been a rough year for our musical legends, it was a pretty solid one for Netflix and Tesla. Heck, even in the throes of a growing fake news crisis, Facebook managed to have more wins than loses. And, once they’ve finished listing off all the ways emoji are taking over the world, they’ll look at some of the best gadgets of 2016.

You can check out every episode on The Engadget Podcast page in audio, video and text form for the hearing impaired.


The NBA is rolling out a new fantasy sports app called InPlay, which will let fans have a second-screen experience during nationally televised games. It’s a slightly different concept than services like Yahoo Fantasy: InPlay syncs stats by recognizing audio from any NBA match being broadcasted on pay-TV, using your iOS or Android device. Once you pick the player you think is going to do well, the application will show you how many points he’s earning you in real time. And if you end up outperforming everyone else playing the game, the league says you could win official NBA swag.

You can download it now from the App Store or Google Play, but you won’t be able to play it until tonight’s games. After that, the app should work with broadcasts on ABC, ESPN, NBA TV and TNT.


A year ago, virtual reality felt almost like a pipe dream. But during 2016, we saw the launches of the Oculus Rift, HTC Vive, PlayStation VR and Daydream, a new mobile platform from Google. VR is here, and it’s very much . . . well, real. We’re still waiting for more games to appear and for the price of truly immersive platforms to fall, but it’s an auspicious start for a category that’s sometimes felt overhyped.

Of course, there was even more great stuff this year beyond VR. We’ve seen the steady evolution of smartphones with Google’s Pixel devices, the iPhone 7 Plus and Samsung’s Galaxy S7 line (with the Note 7 being the obvious exception). Both Dell and HP delivered some of the most refined laptops we’ve ever seen (sorry, MacBook Pro). And we can think of a few more standouts too. Find all of our favorite gadgets of 2016 in the gallery below.


Earlier this year, Apple required all app developers to switch on App Transport Security by January 1st, 2017. The feature (introduced with iOS 9 back in 2015) would have boosted apps’ security, since it forces them to connect to the internet over HTTPS. Unfortunately, not everyone took advantage of the feature, and Google even released some codes that allowed developers to bypass ATS. If you were expecting to be protected by this extra layer of security in a few days’ time, though, you’d be sorely disappointed. Cupertino has decided to extend the deadline and give developers more time to prepare for the switch. In a post on the Apple Developer website, the company wrote:

“App Transport Security (ATS), introduced in iOS 9 and OS X v10.11, improves user security and privacy by requiring apps to use secure network connections over HTTPS. At WWDC 2016 we announced that apps submitted to the App Store will be required to support ATS at the end of the year. To give you additional time to prepare, this deadline has been extended and we will provide another update when a new deadline is confirmed.”

Apple doesn’t have a new deadline yet, but it promises another update when it has a date in mind.


Atari has just released RollerCoaster Tycoon Classic, a “new” game for mobile based on the Atari-produced theme park sims. Classic takes its cues from the original RTC and RTC2, offering a more simple take on park design, construction and management than more recent titles in the series. It’s also the first RTC game for mobile that isn’t stuffed full of microtransactions. Instead, you pay $6 (£4.50) once and then you own the game. Innovation!

Okay, so there are a few in-app purchases. Two content packs — “Wacky Worlds” and “Time Twister” — based on the RTC 2 of the same name are available for $1.99 (£1.50) each. There’s also a Toolkit that lets you edit scenarios, design rides and so on. It also lets you import / export saved parks with cross-platform support for RTC 2 on PC, but that comes at a price: another $6.

All-told, unlocking everything would cost $16, but unbundling it in this way makes sense given many will have no interest in the Editor or additional content.

After the microtransactional mess that was RCT 4 for mobile, and the poorly received RCT World for PC, it’s genuinely surprising to see that Atari actually understands what people want from an RTC title. You can check it out on Google Play or the App Store now.


Just days after Open Whisper Systems concluded the Egyptian government had blocked access to its encrypted messaging service, Signal, the company rolled out an update that circumvents large-scale censorship systems across Egypt and the United Arab Emirates. The update also adds the ability to apply stickers, text and doodles to images, but that’s just icing on the censorship-evading cake.

“Over the weekend, we heard reports that Signal was not functioning reliably in Egypt or the United Arab Emirates,” Open Whisper Systems writes. “We investigated with the help of Signal users in those areas, and found that several ISPs were blocking communication with the Signal service and our website. It turns out that when some states can’t snoop, they censor.”

Open Whisper Systems circumvents filtering systems with domain fronting, a technique that routes all messages through a popular domain name — in this case, Google. All Signal messages sent from an Egypt or UAE country code will look like a normal HTTPS request to the Google homepage.

In order to block Signal in these countries, the governments would have to disable Google.

“The goal for an app like Signal is to make disabling internet access the only way a government can disable Signal,” the company says. The blog post continues, “With enough large-scale services acting as domain fronts, disabling Signal starts to look like disabling the internet.”

Nokia sues Apple over a slew of patent infringements


Nokia announced today that it has sued Apple for patent infringement in Germany and the US. According to the suit, Apple did agree to license a few Nokia patents in 2011, but has declined offers since then. “Through our sustained investment in research and development, Nokia has created or contributed to many of the fundamental technologies used in today’s mobile devices, including Apple products,” said Ilkka Rahnasto, Nokia’s head of Patent Business, in a statement.

The suit was filed in Regional Courts in Dusseldorf, Mannheim and Munich in Germany and the US District Court for the Eastern District of Texas. A total of 32 patents are involved and cover a range of technologies that include everything from the display and user interface to chipsets and video encoding.