When Apple launched the iPad Air, it swiftly kicked the fourth-generation iPad to the curb, but kept the iPad 2 around as an “entry level” option. At the same time as the company has tweaked the iPhone lineup, it’s also pulling a switcheroo in the tablet space — dumping the iPad 2 and replacing it with the Retina-and-Lightning model. The unit is back on the Apple store for the same price as the Retina iPad Mini, so now it’s just a decision as to what size slab your hands can carry.

If you’ve taken a look at our winter 2014 tablet buyer’s guide, you now have a good idea of what slates you should be buying. With many purchases, price can be a sticking point, but thanks to our pricing tools, it doesn’t have to be. We’ve compiled some of the best deals from over the past week — including products from the buyer’s guide, and a few older models you should also take a look at — so you can add a new tablet to your tech arsenal without taking a serious hit to your wallet.

If there are other tablets you have your eye on that we haven’t included here — join us and add them to your “Want” list. Every time there’s a price cut in the future, you’ll get an email alert!

Though it’s not the most powerful small tablet, the 2013 version of the Nexus 7 still packs in a gorgeous screen, a fast processor, stock Android 4.4 and a rubberized casing that feels good in the hand. While its full retail price is still pretty affordable, today’s deal for a refurbished model takes the 16GB version to a sweet spot of $200, the lowest it’s been since November.

When we last looked at the original Nexus 7, it could be had for the low price of $170. If you passed on that deal, you’ll be happy to know that the 32GB version can still be had for the even lower price of $160. If that $40 difference between the old and new is making a buying decision hard, take a look at a direct comparison of specs, scores and prices; you can even add other tablets from our database to the mix if you want to see how they stack up.

Another product from our buyer’s guide that’s getting a discount this week is the 7-inch Kindle Fire HDX, with Best Buy offering the 16GB version for $30 less than the folks at Amazon. If you value speed, the Kindle Fire HDX is a good buy (see how it compares to some other 7-inch tablets), but if you love the freedom that Android brings, you might want to look elsewhere — with the HDX you’re limited to Amazon’s content ecosystem and support services.

The iPad Air might be the big thing right now, but it’s worth noting that the iPad 2 is a great tablet that’s still available from Apple for $100 less than the Air — and it’s even cheaper at other retailers. It’s not featherweight like the iPad Air, but it does have the standard 10 hours of battery life and it runs iOS 7, so the iPad 2 can still run all the latest apps in the App Store.

We’ve seen it before, but not against one of its chief rivals: the Samsung Galaxy Tab 10.1. Now here they are, sharing a little table space — but not getting along too well. On one hand the Tab 10.1 is thin and light on its feet. On the other, the ThinkPad Tablet is large and would very much like to be in charge of your corporate lifestyle. Due to Honeycomb’s limited customizations, Lenovo’s tackling this angle thanks in large part to some enterprise- and stylus-friendly software, much of which the device comes with pre-installed. Join us after the break for a quick demonstration, plus a look back at our first hands-on with the thing.

Who needs sleep, right? Rather than putting in the tried-and-true “eight hours” that your mum still insists that you get, you’re going to be doing something a bit more adventurous this evening. Something involving a “jailbreak” of your recently updated iPod touch, iPhone or iPad. Just hours after Apple pushed out iOS 5 beta 3 to its developers, the folks at iPhone Dev-Team have confirmed that a Sn0wbreeze update will support jailbreaking on that very build. Sadly, it’s still tethered for the time being, and the iPad 2 remains unsupported, but those with nerves of steel (and gobs of vacation days) can hit the source links to get started. Furthermore, we’re just starting to see what kind of wacky tricks beta 3 has up its sleeve — things like custom alerts for text messages and what appears to be a shattering of the app grid on the iPad. For more on that, hop on past the break; for more on the jailbreak, we’d encourage you to talk amongst yourselves in comments below.

JailbreakMe for the iPad 2 is finally live / not live, just keep refreshing 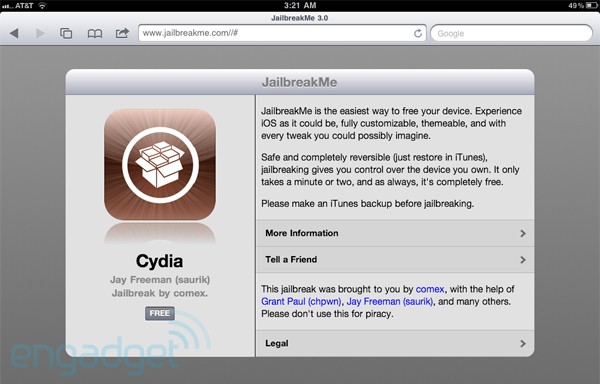 We just mashed our refresh button about a million times to get the screenshot you see above, but it was worth it. JailbreakMe 3.0 with support for the iPad 2 is finally live, and we’re already getting word from tipsters who claim to have successfully jailbroken their iPad 2s running iOS 4.3.3, as evidenced by the pseudo-blurry jailbroken Verizon model below. Thankfully, all of this suggests we’re not dealing with the dodgy release that was leaked previously, but let us know in the comments how it’s working for you this time around and hit the break for another screenshot.

via JailbreakMe for the iPad 2 is finally live / not live, just keep refreshing (update: video) — Engadget.

iOS 5 won’t be ready for the masses until this Fall, but lucky developers — and eager tech bloggers — are able to get in on the action right now. We just got done downloading the 730MB BETA, and have decided to turn our iPhone 4 and iPad 2 into guinea pigs for all the newness. Apple says that there are over 200 new features baked into the updated OS, and we’ve run through the biggies from Notification Center to Twitter to that oh-so-convenient split keyboard for you — all you need to do is click after the br

Opera Mini lands on the iPad in version 6.0

Been loving the Opera Mini experience on your iPhone and wishing for it on your larger iOS device? Opera is today turning that desire into reality with the release of v6.0 of its Mini mobile browser, which now has support for all iOS portables, including the iPad and iPad 2, plus a specific shoutout for the iPhone 4’s retina display. The overall design of the web explorer has also been freshened up, with a “new look and feel,” while a social sharing function will let you blast URLs into Twitter and Facebook directly from the app. Additionally, the new version includes the ability to load tabs in the background and improves support for non-Latin alphabets like Arabic and Chinese.

via Opera Mini lands on the iPad in version 6.0 — Engadget.

The expected dual-camera inclusion on the upcoming second generation iPad is now all but a given with further icon-based evidence fuelling the iPad 2 features fire.

Spotted in the recently released Beta 2 model of iOS 4.3, iPad-bound application icons for Apple’s video calling FaceTime technology, the familiar Camera application and the currently Mac only PhotoBooth software all point strongly in the direction of the predicted rear-facing camera and video recorder joining a second, lower-res front-facing offering.

Whilst the iPad 2 inclusion of dual-cameras and FaceTime capabilities will allow second generation Apple tablet adopters to hold video conversations with iPhone 4, latest generation iPod Touch and certain Mac owners, the arrival of the current Mac OS X-based PhotoBooth App will enable the morphing and adaptation of images caught by the device’s pair of snappers

Anticipated as one of the hottest releases of the year and with the entire tech industry desperate for that first official glimpse, the iPad 2’s form factor has been leaked with a new hands-on video showcasing the device’s upcoming design.

The dummy, none functional iPad 2, believed to have been given by Apple to a Chinese accessories supplier, was spotted in the halls of the Consumer Electronics Show last week with a video (below) of the highly desirable device having just appeared online courtesy of fellow accessories manufacturer GearZap.

Fulfilling a number of rumours and expectations of the product’s upcoming overhaul, the leaked iPad 2 looks set to feature both front and rear facing cameras, seemingly confirming the inclusion of Apple’s FaceTime video calling technology, as well as a larger, more power speaker on the device’s base. Taking design tips from the latest MacBook Air model, the leaked iPad 2 features a silver aluminium rear section, noticeably thinner than the inaugural Apple tablet release and sports a slightly angled edge.

A number of expectant fans will be sad to notice the lack of the rumoured USB port inclusion in the emerging devices design.

Believed to be heading for a February 1st official unveiling ahead of an April/May release, the iPad 2 will look to build on the steady foundations that have lead the original to dominate the tablet PC market.

Steve Jobs might hate 7-inch tablets, going as far as to say users would need to “sand down their fingers” for them to be any good. But that’s not stopped the iPad Mini bandwagon rolling, with a new snap purporting to show the slimmed down version in the wild.

The shot, seen here, shows Taiwanese racing driver Jimmy Lin apparently holding an iPad Mini in one hand, with a regular iPad in the other. The small version is certainly packing iOS, or a variant of it, but beyond that it’s unclear if this really is an Apple prototype.

Of course, rip off versions of the iPad are hardly difficult to come by. And with Jobs so dismissive of 7-inch slates, surely this one’s a fake.