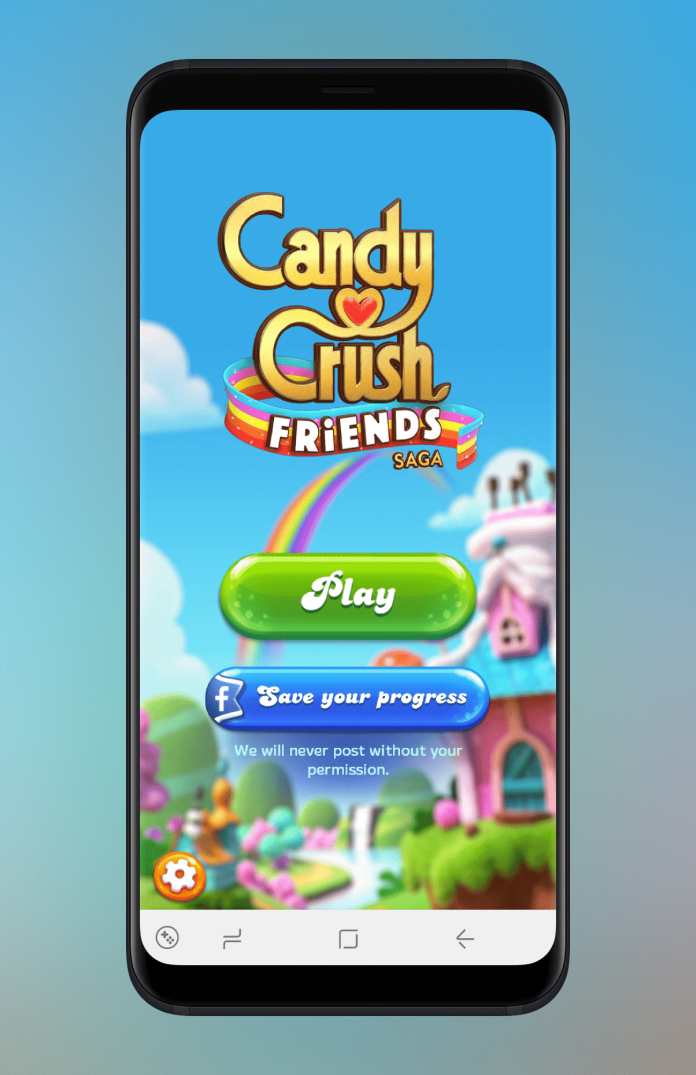 Depending on which side of the story you are, Candy Crush is either a franchise you really like, or hate with a passion. People who like it keeps coming back for its huge amount of content, colorful visual style, and addictive nature. People who hate it either doesn’t like the microtransaction aspect of it, are fed up with Facebook invitations to play the game, or can’t stand King as a company.

It really doesn’t matter which side you fall into, Candy Crush Friends Saga will not make you change your mind. Either you will still love them, or you will find that it adds almost nothing new to its past games.

Have you played previous Candy Crush games? If you have, then this game is basically the same you are already used to, and, as previously said, there is very little new content to be seen compared to other entries in the franchise.

If you haven’t, then the gameplay is massively simple. You get a board full of candies of different colors in random order, and your job is to combine them in a way that lets you complete the goal the game requests of you. The most basic combination consists of three candies, which make them disappear. 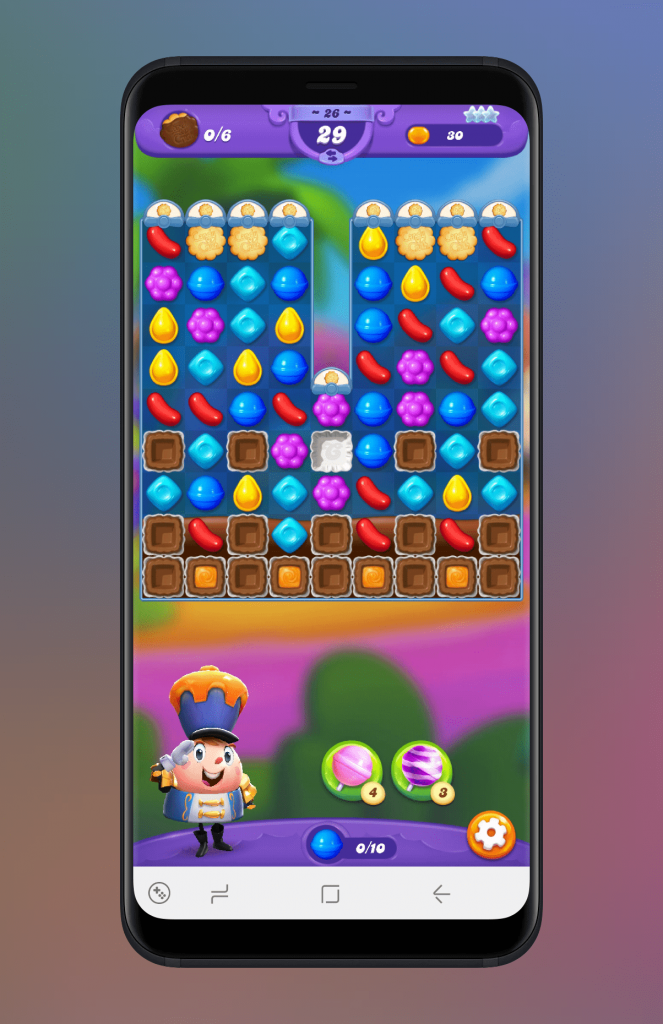 However, there are more combinations, like four, five, L-shaped, and square-shaped, that not only makes them disappear, but also yield additional, more powerful candy. These special treats have a big range of effects, such as clearing whole rows, exploding in order to clear neighboring candy, destroying all candies of the same color across the board, and similar.

You also have a certain number of turns to complete the goal. In case you fail to do so, you lose a life. At first, the game is very easy, and there is no need to worry about lives. However, the game becomes more difficult as you progress through it. Because of the randomness of it, some levels might prove more difficult than they should. You can easily struggle to get even close to the goal the game asks on your first playthrough, and then get a lucky order of candies and clear it without issues. 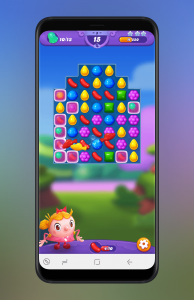 On the main screen, you will notice two buttons: one says “Play,” and the other says “Save your progress,” accompanied by a Facebook logo. One would think that either you play the game and lose the progress you have made each time you close it, or you have to log in to Facebook in order to save your progress. However, both of these are wrong.

In case you decide to not press the button, you will be able to play just fine. Your progress will be saved without issues. However, if you need to save your progress across devices, then this option is necessary.

On the other hand, if you do press the button, you will see that Facebook is not the only option to log in. There’s also an option for a King account. So Facebook might not be needed at all. Frankly, I didn’t test it because this arrangement does not inspire confidence. After all, one of the two buttons at the first screen you see when launching the game is massively misleading, and says a lot about the tactics that King applies to its games.

Anyways, the game teaches you the basics across several different levels. It actually does a pretty good job at it. Sure, the mechanics are easy, but there are several things you should remember around the combinations that you can make in order to get more powerful candy. Even if you don’t remember them all at first, the game highlights which movement is best in order to get the most powerful combination available on the board.

In order to keep things more interesting compared to the regular Candy Crush Saga, developer King has added several different goals for completing a game in Friends. While the original one mostly depended on getting to a certain score or clearing a certain amount of blocks, Friends mostly asks you to “free” animals which are hidden behind candy or trapped inside them. In order to do so, you need to combine candy contiguous to these blocks.

However, some of them have several layers, making it more complicated than it sounds. Even though sometimes it would seem better to go for another combination that would yield powerful candy, sometimes you have to prefer combining a smaller amount of candy in order to reach the goal.

Just as with other games, you have a set amount of lives, and failing to complete the goal means game over for you. Run out of lives, though, and it means you cannot play the game anymore. If you have played other Candy Crush games before, then you know the drill. The easiest way of getting more lives is to ask your friends to send you some. This kind of spam on Facebook is one of the reasons Candy Crush is such a polarizing game. Either you are addicted enough that you don’t care about the spam in order to get lives, or you cannot stand how intrusive this practice is.

With a little help from my friends For this game, King has added a big differentiating factor, and that is the inclusion of Friends. These are characters that are there to help you complete a level. There are a lot of characters you can collect, all with different abilities.

For example, early characters transform regular candy into more useful candy, while others deal additional damage to blocks that are harder to break. The general objective of them is to make the game easier for you. They can also wear different outfits, all of which you get playing through the game.

For some reason, there are some levels in which you cannot use some characters. Also, the game “recommends” you to use one character depending on the level, although for sure you could clear the level using whichever character you wanted.

As this game is completely free to download, King then makes money through microtransactions. The game’s primary currency is gold bars, which lets you buy additional lives and items to use in the games. You can also use them to buy additional turns in case you run out of them but feel like you are very close to the goal. 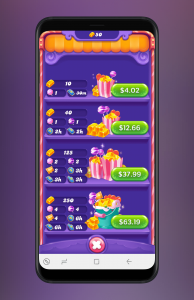 Candy Crush Friends Saga also offers some packs in which you are supposed to get more of your money’s worth. With these, you don’t only get bars but additional items to make the game easier. These can be as cheap as $4 or as expensive as $260.

Compared to other games that employ this freemium model, I find Candy Crush Friend’s microtransactions to be massively expensive. For example, getting all lives back costs 9 gold bars, while buying 12 bars (because of course they don’t sell 9 only) costs $4. If you are impatient and want to play right away, that’s $3 you would have to put down to play again. You can also wait until the lives regenerate (which takes time), or you can spam your friends.

I have also noticed that ads get worse and worse the more you progress, and I know for sure that ads can get very annoying on later levels of the regular Candy Crush Saga. Knowing King, I would expect it to be the same for Friends.

Candy Crush games have a visual style that has been associated to the game since its beginnings. Friends is no different, sporting the same colorful design with very saturated colors. Everything, especially candies, seem to pop out of the screen. The visual effects are very flashy, using a lot of bright animations.

For this offering, the friend you use to complete the level appears at the beginning performing some kind of animation. Also, it appears dancing at the end while something called Sugar Crush happens (basically getting additional points at random for free). Frankly, neither does anything for the game, even becoming annoying as you complete more levels and have to sit through the same animations every single time you play a level. At least, it closely adheres to the extravagant nature of this game. Music and sound effects are also what you would expect from the franchise. Each visual effect has its corresponding sound effect to go with it, and there is not a single interaction that doesn’t have a sound built in. Unlike the previously mentioned character animations, the sound part of the game does not get old as quickly, and, if you do get fed up, you can turn them off in the settings.

It is important to note that even in my Samsung Galaxy S8, the performance was not what I would expect. There were plenty of dropped frames and overall sluggishness. It wasn’t that bad, but I am using a more than respectable phone that hasn’t struggled with almost anything I’ve thrown at it. That makes me worry about the performance of it on middle and low-range devices.

Candy Crush Friends Saga builds on the solid foundations of its predecessors and offers a game with the same mechanics, gameplay, art style, and practices. It does add new elements in the form of Friends, but, other than that, this is another Candy Crush game that does little for the franchise and the genre in general in terms of originality. Think about it like the annual titles that EA does for FIFA and Madden. There are a couple of new things, but the game is vastly unchanged from previous offerings.

Nevertheless, the amount of content is huge, as with these games in general. If you like the previous games and want more, then this is a no-brainer, since it provides the same content that you already love. If you are looking for something different to the other games in the franchise, then sadly you will have to keep waiting and look elsewhere.