Following today’s Apple event at the Howard Gilman Opera House in Brooklyn, where the company unveiled new iPad Pro, MacBook Air, and Mac mini models, MacRumors received some hands-on time with the products at a nearby location.

For more first impressions, check out our roundups of hands-on articles about the new iPad Pro and Macs from other publications.

As the iPhone X was to the iPhone, the new iPad Pro represents the most significant redesign of the iPad in its eight-year history, complete with a nearly edge-to-edge display that eschews the home button. That also means no Touch ID, replaced by Face ID, but the TrueDepth sensors fit in the top bezel without a notch. 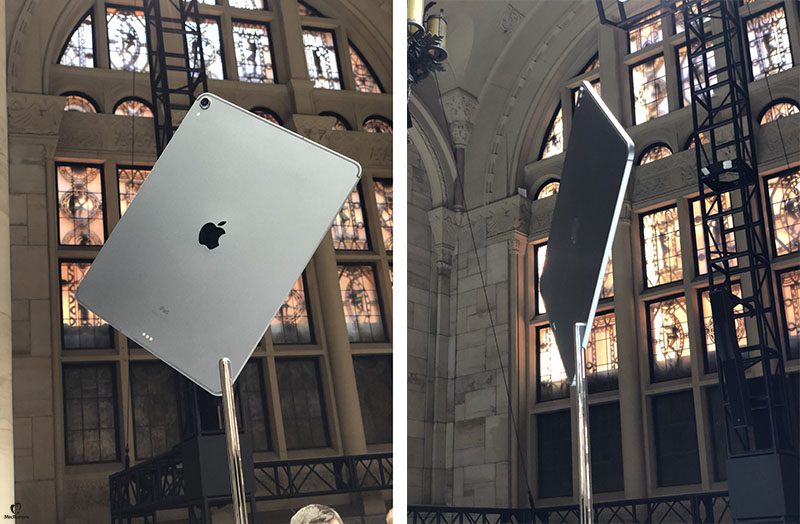 The new iPad Pro looks and feels incredibly sleek. The bezels have been dramatically reduced in size compared to the previous generation, although they aren’t as slim as those on the iPhone X and newer. As good as Apple’s palm rejection technology is, the extra space helps prevent unintended tapping and swiping. 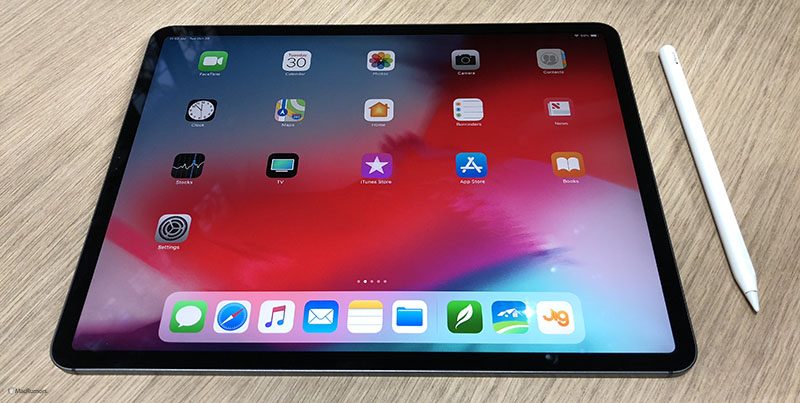 I’m not a display expert, but the Liquid Retina display on the new iPad Pro looks crisp with vivid colors. Apple said it is using the same anti-aliasing and other technologies as the iPhone XR to stretch the LCD nearly edge to edge, which is a truly impressive engineering feat. This is the best display on an iPad yet.

The new iPad Pro feels more like a true slate, with sharper, flatter edges complemented by more traditional rounded corners. And at just 5.9mm, the tablet is remarkably thin, with the 11-inch model weighing just over a pound. Both it and the new 12.9-inch model feel about the same weight as their 2017 equivalents though.

Apple has replaced the Lightning connector with a USB-C port to provide creative professionals with a more versatile connectivity solution for pairing accessories and peripherals, such as a 5K external monitor. The USB-C port also has power-out, meaning the new iPad Pro can charge an iPhone and other devices.

On the right edge of the new iPad Pro is a new Magnetic connector. A redesigned Apple Pencil attaches magnetically and begins wirelessly charging instantly. I shook the iPad Pro slightly and the Pencil maintained a strong hold. 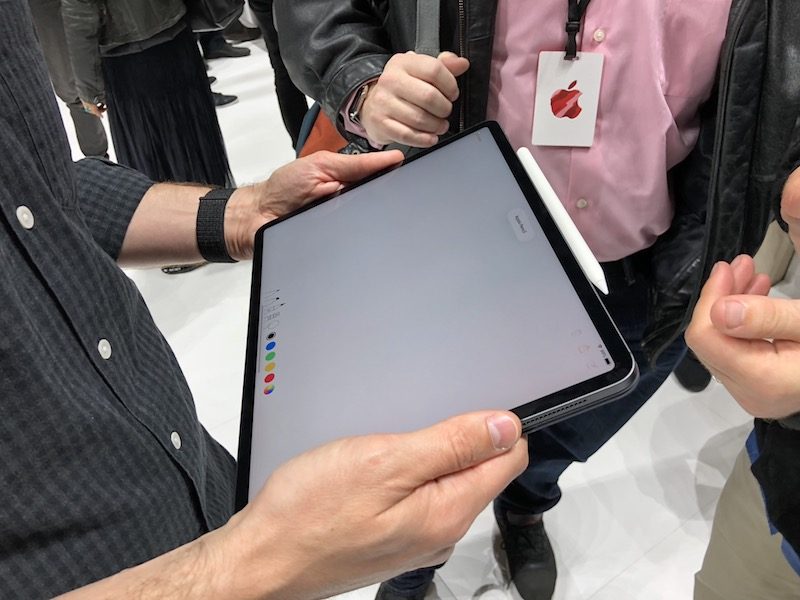 Magnetic connector on new iPad Pro
The new Apple Pencil supports a double-tap gesture that can be customized to switch between drawing tools or to show the color palette. 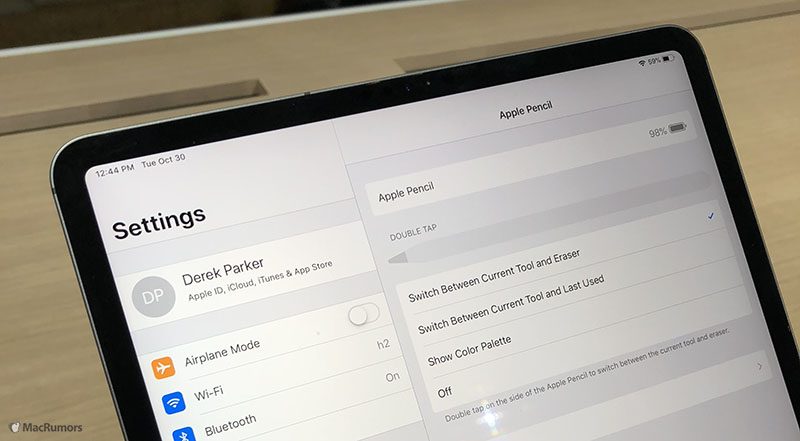 Apple generally doesn’t allow benchmarks to be run during its hands-on sessions, so we’ll have to wait for that, but the new A12X Bionic chip with an eight-core CPU and seven-core Apple-designed GPU is said to provide up to 90 percent faster multi-core performance with up to twice as fast graphics.

The new iPad Pro packs smaller speakers, yet they are louder and produce stereo sound. Apple’s hands-on room was not a good environment to test the speakers, so we’ll have to wait until we get the tablet in our hands.

The new iPad Pro starts at $799 in the United States with 64GB of storage. It’s available to order starting today ahead of its November 7 release date.

MacBook Air and Mac mini ahead…

Moving on, the MacBook Air received its most significant redesign since the second-generation model with tapered edges was released in 2010. 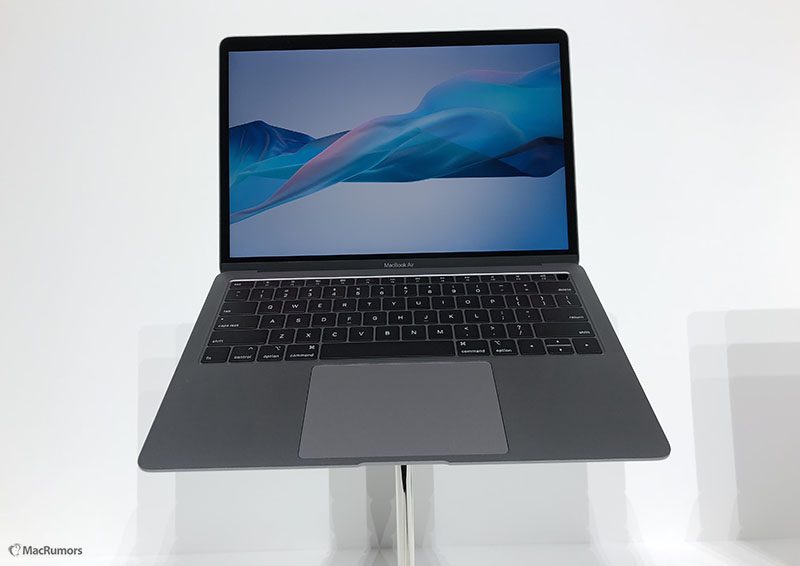 In the limited time I had to spend with the new MacBook Air, the Retina display looked great. It’s a huge step up from the previous display. 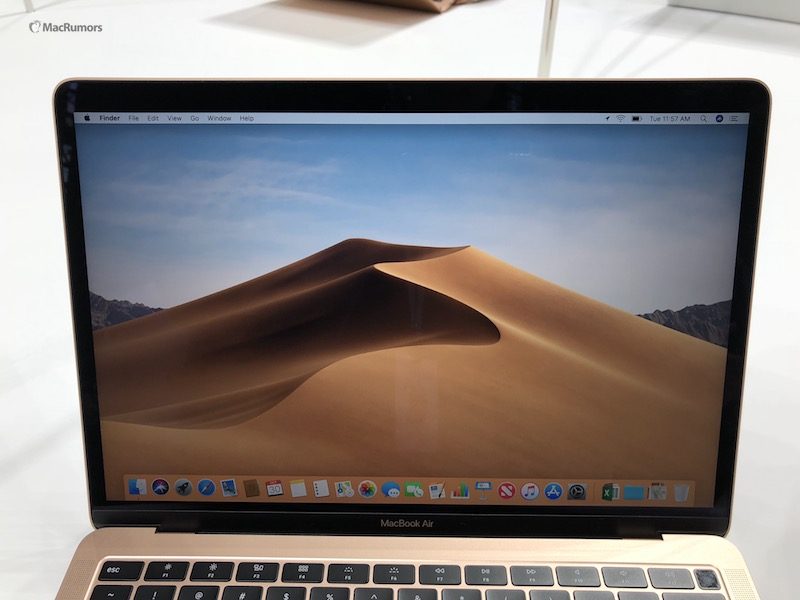 Apple says the new MacBook Air takes up 17 percent less volume than the previous model. As a result, the notebook now weighs 2.75 pounds, compared to just under three pounds for the previous model. I found the extra portability to be noticeable, and the weight difference to be negligible.

I tested the new keyboard briefly and it felt and functioned the exact same as the keyboard on the 2018 MacBook Pro. Whether you hate it or like it, Apple seems to be sticking with the butterfly mechanism for now, despite isolated issues with sticky and unresponsive keys that prompted lawsuits and a repair program. 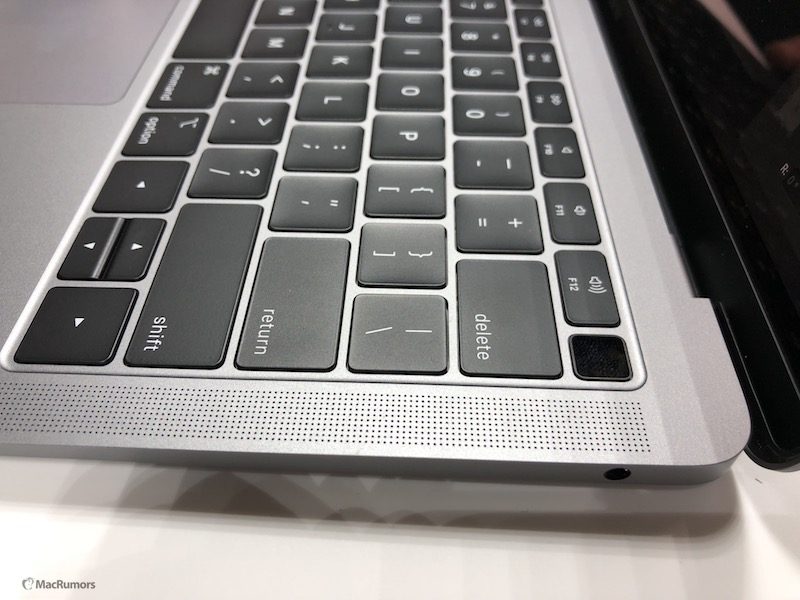 The keyboard is complemented by a larger Force Touch trackpad. It works exactly like the one on the MacBook Pro. The extra space doesn’t hurt. 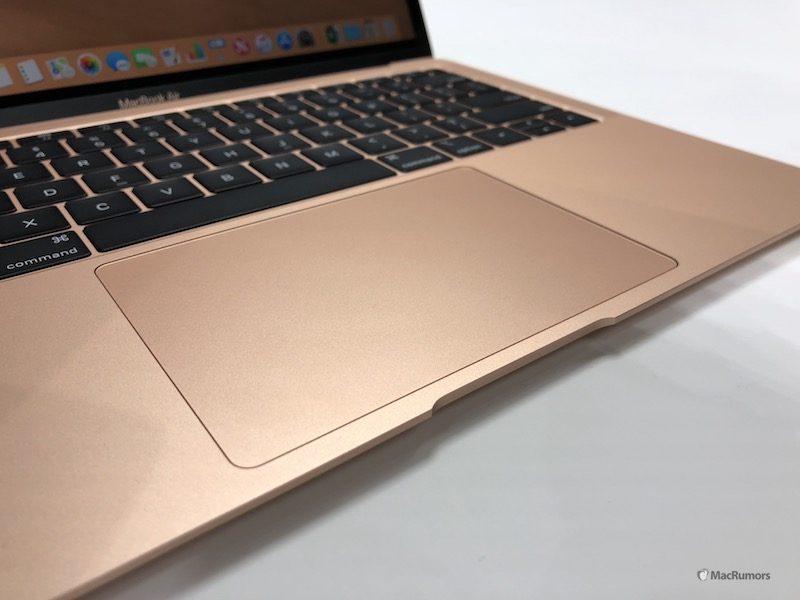 Positioned above the keyboard is Touch ID, a first on the MacBook Air, alongside standard function keys instead of a Touch Bar. In line with the MacBook Pro, the Touch ID sensor is powered by the Apple T2 chip. Like the 2018 MacBook Pro and iMac Pro, the new MacBook Air features Hey Siri support. 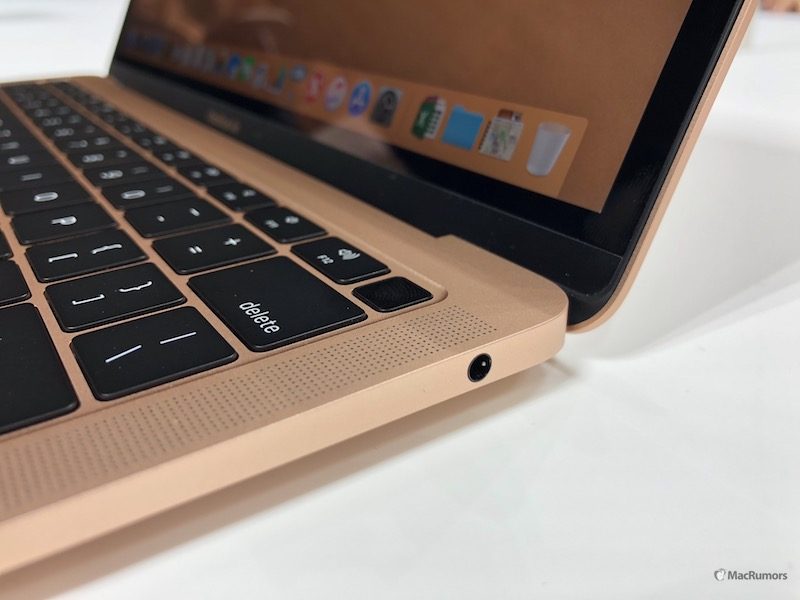 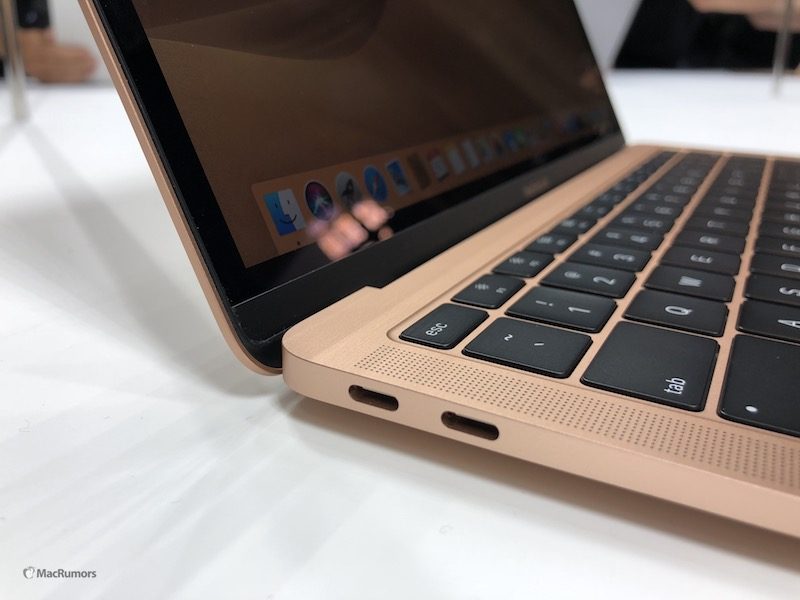 Apple says the new MacBook Air is its greenest Mac ever, made from 100 percent recycled aluminum.

As mentioned, Apple’s hands-on sessions are primarily for looking at and feeling new products, so we’ll have to wait for benchmarks to judge performance. The new MacBook Air features Intel’s eighth-generation dual-core Core i5 processor, with a base clock speed of 1.6GHz and Turbo Boost up to 3.6GHz. 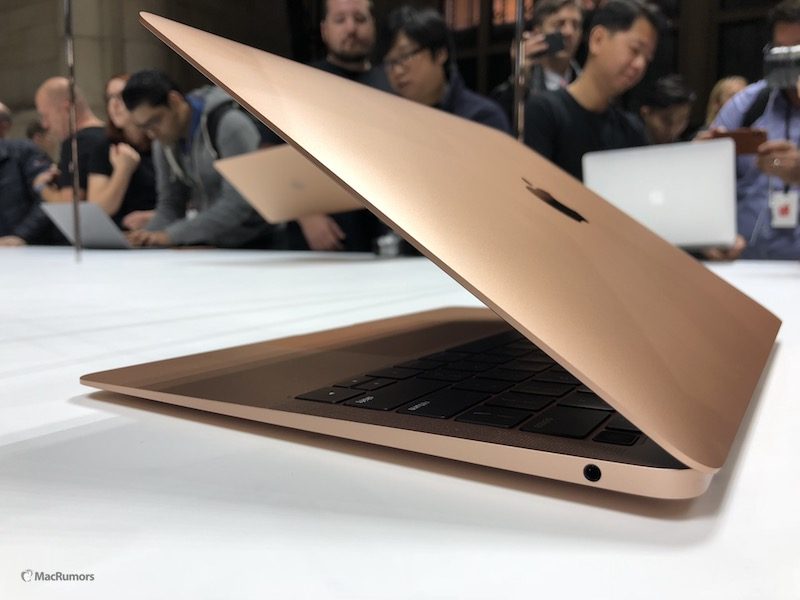 Other tech specs include up to 16GB of RAM, up to 1.5TB of SSD storage, and integrated Intel UHD Graphics 617.

The new MacBook Air is available to order starting today ahead of its November 7 release date in many countries.

All in all, the MacBook Air has received a much-needed refresh that will help reignite its popularity as the perfect on-the-go notebook. It’s also a worthy rival to the 12-inch MacBook now, and $100 less to boot. We’ll have more comparisons of Apple’s latest notebooks in the days and weeks to come.

As for the new Mac mini, Apple had only a few of them set up along the perimeter of the hands-on room. 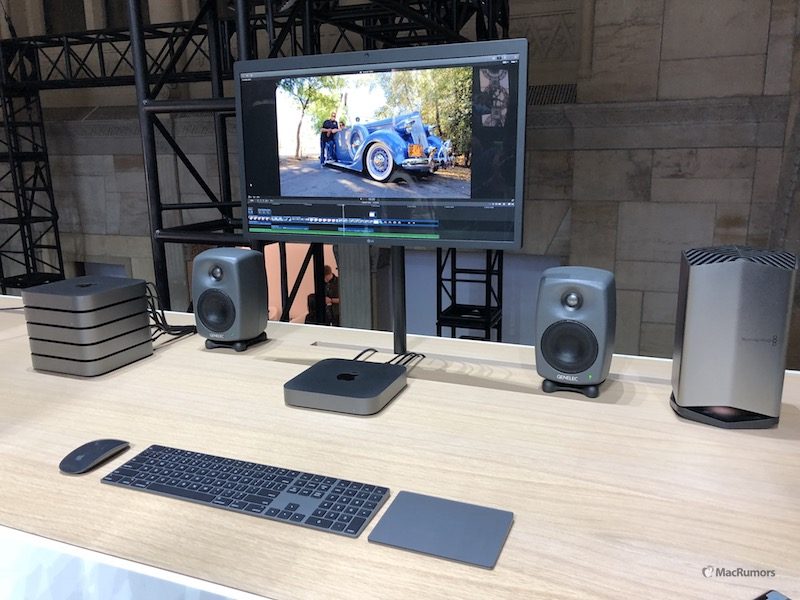 We didn’t have much of an opportunity to truly play with the new Mac mini, but it looks beautiful in it sleek new Space Gray finish. Beyond that, it looks more or less the same as the previous model.

The real upgrades to the Mac mini come on the inside, with up to a 3.2GHz six‑core eighth‑generation Intel Core i7 processor, up to 64GB RAM, up to 2TB of SSD storage, and Intel UHD Graphics 630. Considering the Mac mini was last updated in 2014, these tech specs will make it significantly faster. 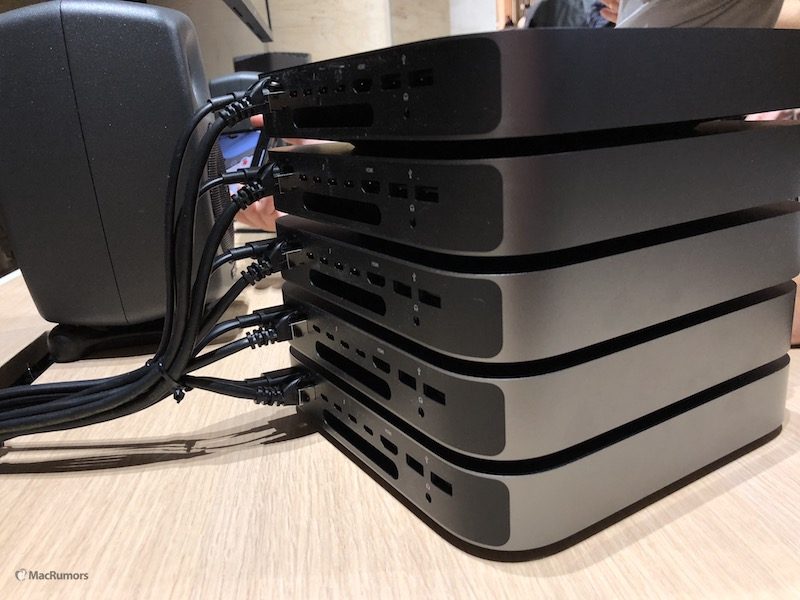 Apple says the new Mac mini has up to five times faster performance and up to 60 percent faster graphics.

The new Mac mini has four Thunderbolt 3 ports, one HDMI port, two USB-A ports, and 10-Gigabit Ethernet, but loses a SD card reader. It also has a new thermal system that supposedly allows for double the airflow.

Pricing starts at $799, up from $499 for the previous model, with orders today and availability November 7.

Stay tuned to MacRumors for continued coverage of the new iPad Pro, MacBook Air, and Mac mini. Also check out @MacRumors and @MacRumorsLive on Twitter for a recap of today’s announcements and more.