Samsung Galaxy Note 9 vs. iPhone XS Max: Which should you buy?

We’re a virtual company made up of tech experts from across the globe. We live and breathe Android phones, and use nearly every one of them. We also use iPhones — so we can offer you the best buying advice possible. Right now, the Galaxy Note 9 is probably the best Android phone in the world. It’s got everything you need to get work done, play games for hours, and do a bit of creative writing or drawing with the S Pen. The camera is awesome, battery life is insanely good, and there’s a headphone jack.

The iPhone XS Max has the biggest screen on an iPhone yet, and while that may please people looking for a big iPhone, iOS 12 doesn’t take advantage of that extra real estate.

Both of these phones are at the top of their categories — they’re arguably after the same customers — but the Note 9 seems better optimized for its larger size, whereas the iPhone XS Max just feels like a bigger iPhone XS. Without rewarding its customers with any meaningful new features, buyers of the Note 9 get a bigger screen and an S Pen, a huge battery, and proper OS optimizations that allow for split-screen apps, picture-in-picture video, and more.

What’s the big deal between the Note 9 and the iPhone XS Max? 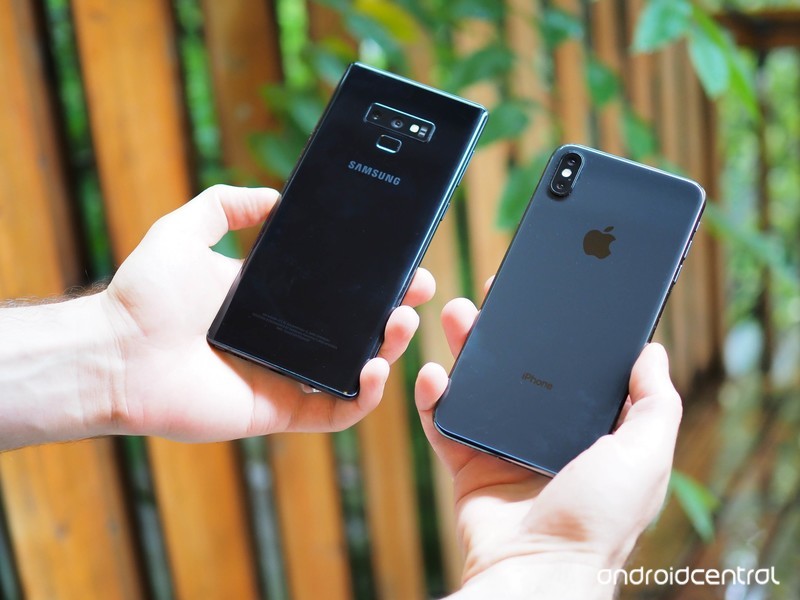 Apple vs. Samsung. iOS vs. Android. The debate is older than time itself — if time began around 10 years ago. The reality is that you’re likely already entrenched in one camp or another.

Comparing iPhones to Galaxy phones, from a spec perspective, is also a bit of an apples to oranges spec battle — excuse the pun — because Apple optimizes its software to work with hardware it develops largely on its own, negating the need for lots of RAM, or for oversized batteries. Of course, the specs don’t mean much unless they also come with a great experience, and both phones deliver that. Exceptional touch responsiveness, great color reproduction and viewing angles, awesome dual speakers, and basically every amenity you could imagine — wireless charging, IP68 water and dust resistance, and great build quality. 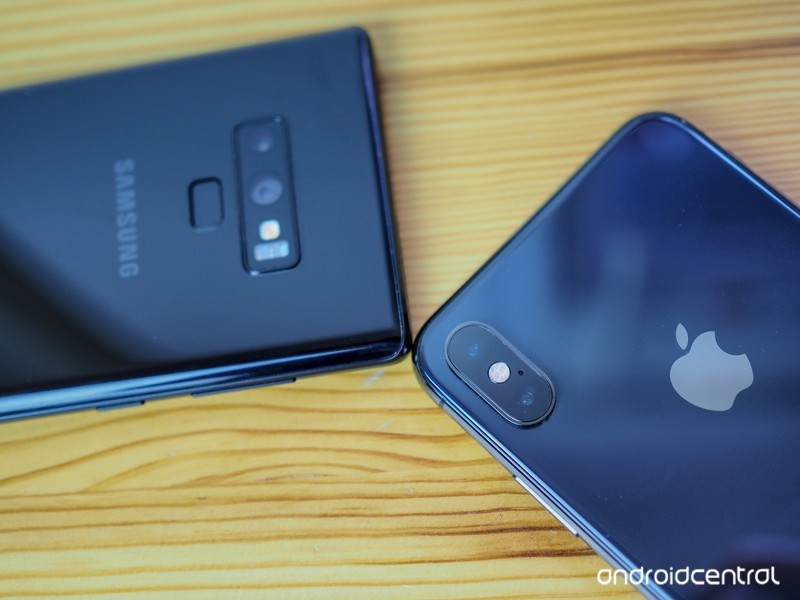 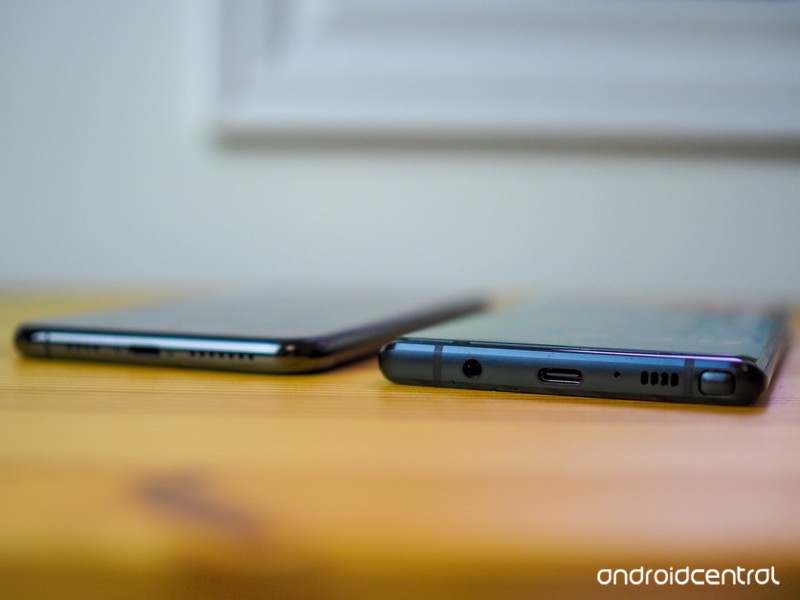 What’s left are the cameras which, again, on paper looks quite similar: a main 12MP wide-angle sensor and a secondary telephoto lens, both equipped with optical image stabilization. Apple claims that the iPhone’s camera is significantly improved this year, but its physical size is now identical to the Note 9’s — 1.4 micron pixels.

The Note’s f/1.5 lens is a bit wider, but that only kicks in under low-light situations — daytime photos are shot at f/2.4 with a dynamic aperture. Both phones support portrait mode and a wealth of other photo and video features like super slow motion (though the Note takes the edge with 960fps slo-mo) and 4K video capture (both can do 4K@60, too).

When you look at these two phones side by side, you can tell that the industrial design differs in so many ways — Apple has embraced the edge-to-edge display with the notch in order to faciliate its Face ID biometrics, eschewing fingerprint unlocking entirely.

Samsung, instead of going edge-to-edge vertically, decided to differentiate itself by curvinig the horizontal edge of its phones, keepinig the front relatively symmetrical. I think it looks better, but the iPhone XS Max does offer ever-so-slightly more usable screen real estate. Well, technicially, sinice Apple doesn’t make use of the space with additional content.

What about the cameras? Here’s where thinigs get tricky. Both phones have pretty much the same camera hardware on paper, though Apple makes more of its use of “computational photography” than Samsung does — at least right now.

In practice, photos taken during the day are basically a wash — while they have slightly different color profiiles, and tend to expose the same scene in different ways, both the iPhone XS Max and Galaxy Note 9 take amazing shots in good lighting. I did find that the iPhone tended to favor faster shutter speeds (there’s good science about why it does that) darkening some scenes that don’t really need to be (like the leaf below) but overall it’s difficult to complain about either one.

In low light, it’s a different story. I far prefer the slightly more colorful, detailed, and ultimately more noisy photos taken by the Note 9 than the muted, smoother images captured by the iPhone XS Max.

One could argue that the iPhone’s photos are more true to life, and were you to take RAW photos from either one the iPhone would be in a more neutral starting point for editing, but the vast majority of photos I take on my phone are only lightly edited and shared straight to social media or with family members. In those situations, I’d much rather see my subject with a bit of noise than have a cleaner, darker shot. Your mileage may vary, though.

On the other hand, Apple’s portrait mode features are much more mature than Samsung’s Live Focus. Not only does the iPhone offer better edge detection, but the finished product almost always looks more pleasing and better framed. Samsung’s Live Focus is often so bad that it’s almost not worth using — which is usually fine because the f/1.5 aperture of the standard lens captures some great depth of field without resorting to any trickery.

Which one should you buy? My goal isn’t to convince you to buy one of these phones over the other. In fact, you probably don’t need anyone to tell you which to consider — you likely made up your mind a lot time ago. The point of this comparison is to prove that the differences between the best iPhones and Androids, at least from a hardware perspective, are dwindling year over year, and the software is largely what separates them.

To that end, if you are wondering which one wins, the Samsung Galaxy Note 9 is a better phone. Its software is highly optimized for the enormous 6.4-inch OLED display, and the oversized form factor gives it an S Pen, a bigger battery, and a headphone jack.

The $1000 phone that justifies its price

The Galaxy Note 9 is probably the best phone you can buy. Awesome hardware, reliable software, and so many features. It’s just a fantastic product.

The iPhone XS Max is a bigger iPhone XS, which happens to be the best iPhone ever. But the Max is ungainly and doesn’t offer any features to justify its higher price, size, and weight.

Read more from News
← Samsung Chromebook Plus V2 is getting an LTE model
Are you getting the Pixel 3 or Pixel 3 XL? →