LG is once again innovating in the smartwatch space.

I have a lot of respect for the wearable division at LG. Throughout its history, this team has pushed the envelope and tried new things more times than any other smartwatch manufacturer in the history of Wear OS. LG was one of the launch partners of Android Wear, one of the first to make a fully round watch, and the first to make a cellular Android Wear watch. It’s a rich, if brief, history of innovation and creative problem solving, which I have appreciated quite a bit.

At its V40 ThinQ launch, LG broke the mold again and made a smartwatch with something no other company has. The LG Watch W7 has mechanical watch hands attached to an actual, real watch movement, but it also has a fully circular touch display with an excitingly custom version of Wear OS onboard.

And after spending a little time with one, my finger is hovering painfully over the pre-order button.

As smartwatches go, the LG Watch W7 looks fairly standard on the outside. The stainless steel body and rubbery sport strap look and feel extremely familiar if you’ve used an LG smartwatch in the last couple of years. The rotating crown on the right side of the body is flanked by a pair of buttons, giving the whole body a very traditional watch look and feel.

The mechanical hands are immediately noticeable. LG is one of several smartwatch manufacturers over the years that have used animation tricks to create that real watch illusion on several watch faces, but the polished metallic surface of these hands is something no flat display can replicate. And at first glance, these mechanical hands almost seem like an obstacle to using a smartwatch. These physical pieces of hardware exist in between you and the display, which means they can partially obscure notifications or complications on a watch face. But LG recognized this could be an obstacle and dedicate the top physical button the watch to solving it. When you hold it down, the mechanical hands get out of the way so you can see what you couldn’t before. Granted, this is a solution to a problem LG created with this design, but the solution is fairly elegant in its execution. 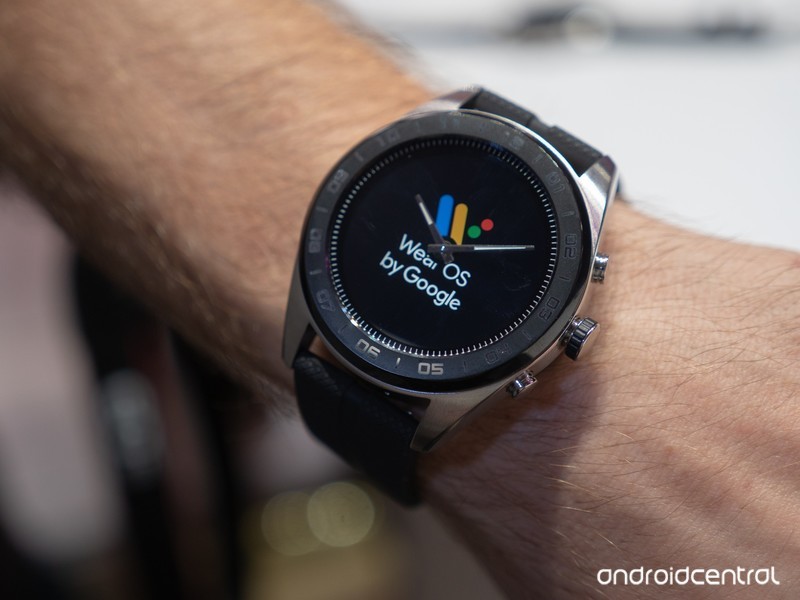 Creating space in between the touch panel and the display for mechanical hands, and the movement to drive those hands, means the watch is a little on the chunky side. It’s not quite as tall as a TicWatch Pro or the larger Samsung Galaxy Watch, but this is not a small watch by any means. But those watches have things this does not, like NFC and a heart rate monitor for fitness tracking. And because it’s packing a much older Snapdragon Wear 2100 processor, we already know it’s not going to blow us away when it comes to performance and battery life. The compromises with this design are quite clear and quickly become difficult to swallow when matched with a $450 price tag.

That having been said, the unique things the LG Watch W7 can do are cool as hell. There’s a whole suite of what LG calls “Master Tools” which use the mechanical hands to spectacular effect. The compass app uses the hands to point North no matter where you are standing. The stopwatch and timer apps use the hands to physically count up or down. These may seem like small things, but out in direct sunlight where literally every smartwatch struggles to display something, you have access to this whole mess of apps that will always be super functional because the mechanical hands are so visible. And that’s pretty important for people who want their smartwatch to be a watch first and a smart accessory second. For the folks who see things the other way around, however, there’s a good chance you’re going to want to wait for the second generation of this idea.