Kévin Eugène, a web developer and UI/UX designer, this week shared a new iOS concept that he calls “iOS Mogi,” with the aim of improving the look and functionality of Apple’s AI assistant Siri (via Reddit). As Eugène explains in his Medium post on iOS Mogi, his goal was “not to create new commands” or completely re-build Siri, but to display the voice assistant “in a different way” that is “more useful to the user.”

This led to iOS Mogi’s main concept: Siri as a drop-down notification banner that Eugène describes as “parallel help.” The non-intrusive banner doesn’t take up the whole screen as Siri does today, allowing the assistant to perform contextually aware tasks in the background while the user does something else. As with all concepts, it’s important to remember that Eugène’s designs in no way indicate what we’ll see with Siri in a future version of iOS.

Images and GIFs via Kévin Eugène on Medium
In Eugène’s main example, he asks Siri to “Show me pictures of Japan” while texting a friend in Messages, and then he swipes down on the notification, scrolls until he finds the ones he wants to send and taps to select them all. Thanks to the contextual awareness of Siri in iOS Mogi, this drop-down notification also has a blue Messages “send” button, which Eugène taps to send all the photos directly to his contact.

iOS Mogi also includes a multitasking feature where it’s possible to ask Siri to open pages from an app while performing tasks in another app. Eugène gives the example of writing an email and asking Siri to open a conversation from Messages in a drop-down notification, scrolling to find a picture you need, and then dragging and dropping that image directly into the email.

Eugène’s version of Siri also allows for “Siri actions” that translate touch gestures into voice commands, like scrolling in Apple Music or editing an email’s content in Mail. Without needing to physically interact with an iPhone, Eugène explains that this could be particularly useful for users with a disability, but believes such actions would be of benefit for all iOS users.

The last of Eugène’s Siri concepts in iOS Mogi involves saving elements from anywhere in the OS to use in another app, including an improved copy/paste feature. In the concept, users can copy as normal and then Siri saves all items and text copied, which can be viewed by saying “Show me all my saved elements.” From here, each element can be edited, copied again to paste in another app, or dragged and dropped into the open app. 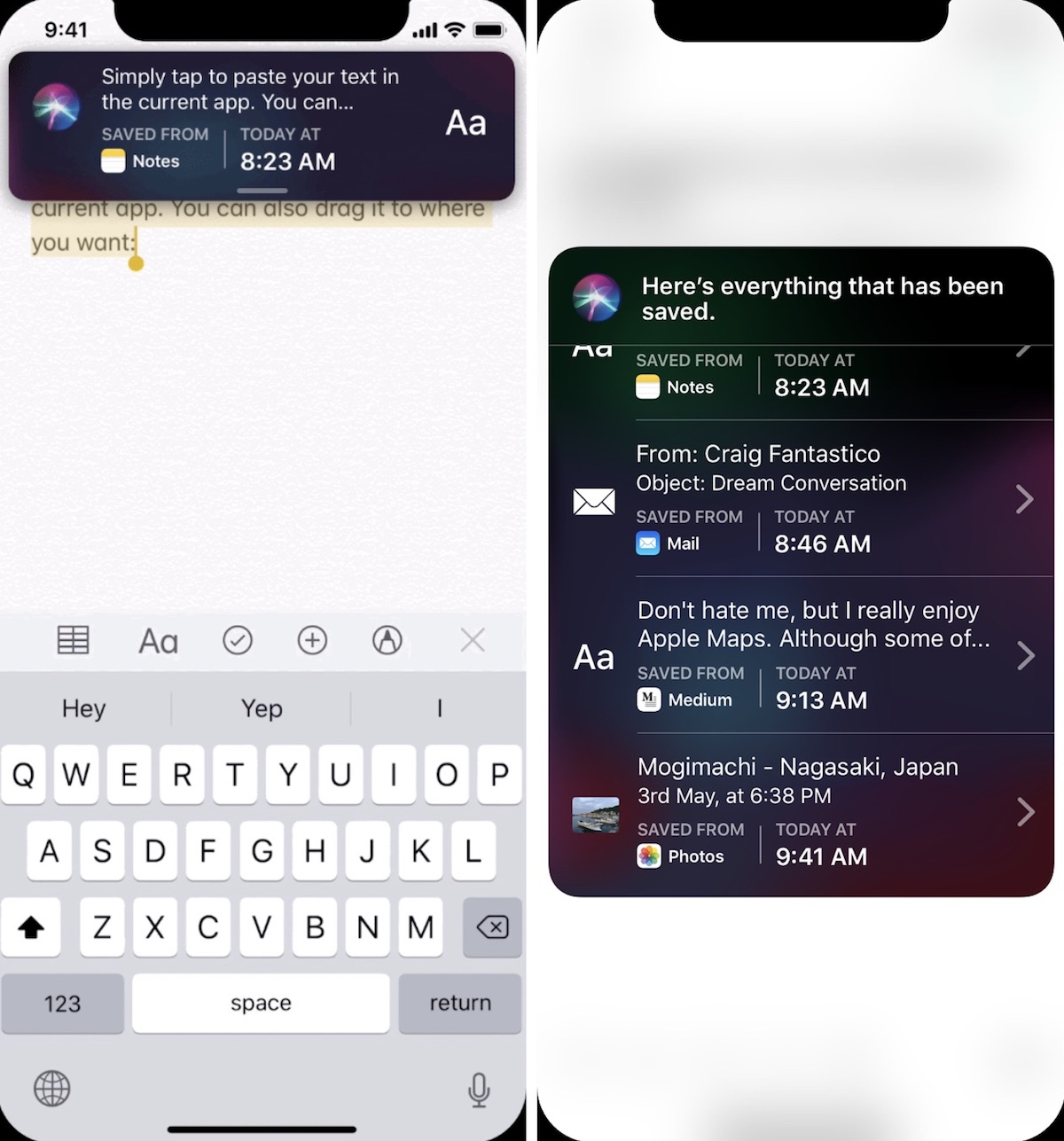 The iOS Mogi concept is full of other ideas for Apple’s mobile operating system, including updates to Apple Maps, “live notifications,” multitasking, ARKit features, and more. Head over to Eugène’s Medium post to see the full concept.

Prior to the unveiling of iOS 12 at WWDC in June, we saw a few concepts for future versions of iOS from other graphic designers, including one from Michael Calcada that focused on a “Siri Sight” augmented reality feature for navigating around cities. Another one shared by Álvaro Pabesio focused entirely on Apple Music — which isn’t a priority for Apple’s iOS 12 update — and beefed up the music streaming app with music history stats, a new UI, new profile pages, group playlists, and more.

Tags: Siri, Concepts
Discuss this article in our forums