The Galaxy Watch could be Samsung’s best and boldest smartwatch yet — here’s why.

It’s been a hot minute since Samsung released the Gear S3, and while the Gear Sport did a nice job at holding us over for a while longer, it’s time we get a proper sequel to one of 2016’s best smartwatches.

The rumor mill suggests that this year will see Samsung release the successor we’ve been longing for, but instead of a traditional Gear S4, reports are coming out that the new gadget will be called the “Galaxy Watch” and use an operating system Samsung hasn’t dabbled with since 2014.

What is the Galaxy Watch and why should you care about it? Here’s everything you need to know!

Up until now, we’ve been unsure as to when Samsung will be announcing the Galaxy Watch. The possibilities include the Note 9 event and IFA, but according to a new report from ZDNet, it’ll be the former of those two.

The Note 9 launch is scheduled to take place on August 9 in New York City, and along with this, ZDNet also says pre-orders will go live just a few days later on August 14 with an official launch following on August 24.

Furthermore, both that report and one from SamMobile claim that the Galaxy Watch will actually run Tizen and not Wear OS like we’ve heard from other rumors. This does seem more likely considering the time and money Samsung’s invested into Tizen, but maybe we’ll still see a special edition of sorts that does run Wear OS? Who knows.

Looks like that Galaxy Watch branding is the real deal.

A few short days after that name popped up for the first time, the above logo was spotted going through the Korean Intellectual Property Office — essentially confirming that Samsung’s next watch will be called the Galaxy Watch and not the Gear S4.

What’s with this talk about Wear OS? 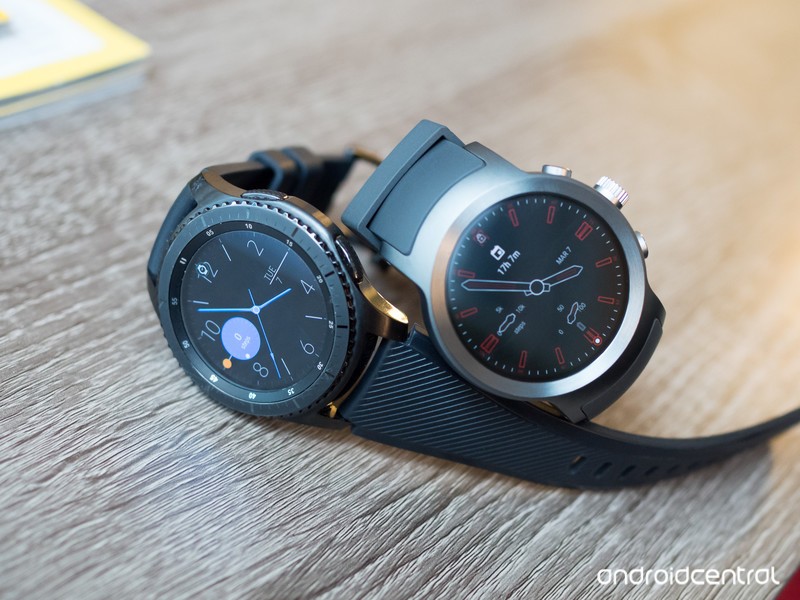 Almost all of Samsung’s wearable products have used the company’s own Tizen operating system, but with the Galaxy Watch, that could be changing.

Back in late May, it was reported that some Samsung employees had been seen wearing Gear watches running Google’s Wear OS (previously called Android Wear). That rumor was put to rest a couple weeks later, but then on July 6, another tipster stated that the Galaxy Watch will, in fact, use Wear OS instead of Tizen.

While that may seem like a ball out of left field, this wouldn’t be unheard of for Samsung. In 2014, one of the very first Android Wear watches to come out was the Samsung Gear Live.

However, on July 18, another report popped up claiming that Tizen will actually be the operating system of choice — not Wear OS.

We’re still not entirely sure what’s going to happen here, but a Wear OS watch from Samsung would be a huge win for the platform as a whole. Google needs big names to back Wear OS, and who better to support it than one of the largest companies on the planet?

When will the Galaxy Watch be released?

Samsung’s yet to release any teasers or press invites for the Galaxy Watch, but according to the rumor mill, we’ll see it announced alongside the Galaxy Note 9 on August 9.

Current rumors point to the Galaxy Watch launching on August 24.

Following the August 9 announcement, pre-orders for the Galaxy Watch will follow on August 14. From there, the gadget will officially launch on August 24.

Should that rumor turn out to be false, the next logical announcement will likely come during IFA in Berlin in late August / early September.

How much will the Galaxy Watch cost?

As much as we loved the Gear S3, its price tag wasn’t the easiest to swallow at the time at $349. However, compared to today’s market, that’s not really unheard of.

A Series 3 Apple Watch with GPS and LTE will set you back at least $399. If you get the model without LTE, you’re still looking at a minimum of $329.

With that in mind, we’ll probably see the Galaxy Watch sell for around $300 – $350 depending on whether or not it has LTE.

That’s certainly not cheap, but if Samsung knocks it out of the park with its design and features, it should be able to hold its over (if not trump) what Apple’s currently offering.