With far-field voice recognition, one difference between the two devices is that the Fire TV Cube relies on eight microphones embedded into the box to hear users across the room, whereas Apple TV 4K picks up commands solely via the handheld Siri Remote. The Fire TV Cube does ship with an Alexa Voice Remote, however, so handheld commands are also an option.

The Fire TV Cube appears to be similar to HomePod in regard to far-field voice commands, with advanced beamforming technology that suppresses noise, reverberation, currently playing content, and competing voices from other people “to make sure Alexa clearly hears your request.”

“We believe voice makes it easier for customers to control their entertainment systems and watch the TV and movies they care about,” said Marc Whitten, Vice President of Fire TV. “And, it’s just the beginning. Amazon Fire TV Cube will only get better over time with the Alexa service always getting smarter.”

Another notable difference is the Fire TV Cube’s compatibility with set-top boxes from cable companies including Comcast, DISH, and DirecTV. With the integration, users can ask Alexa to “switch to channel 31” and the Fire TV Cube will speak to the cable box to initiate the command.

With HDMI CEC, users can power their TV sets on and off, with Amazon giving the following example of this interaction: “Even with the TV off, simply say ‘Alexa, play Billions on SHOWTIME’ and Fire TV Cube powers on your TV and starts playback right where you left off.” 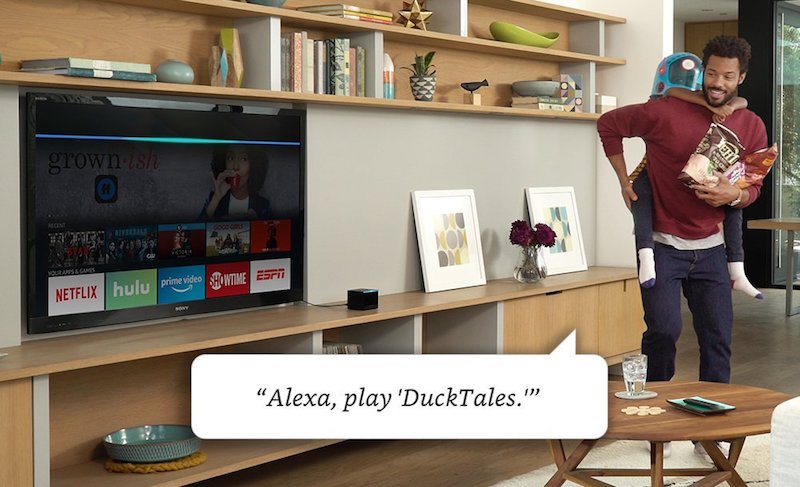 Otherwise, the Fire TV Cube has a user interface that Amazon says puts “content forward” and is built around voice control. Commands include “Alexa, find sci-fi movies”; “Alexa, play the trailer”; and “Alexa, show me more results.” Users can also initiate searches based on directors and actors.

Additionally, the company optimized Alexa responses for the big screen “with rich visual information,” so users can view smart home camera feeds, check out the news, catch up with sports, look at the weather, and more after asking Alexa for each task.

The Fire TV Cube can be pre-ordered today and tomorrow for a special price of $89.99 (for Prime members only), and afterwards the device will cost $119.99. The Cube comes with 16GB of storage, a power adapter, IR extender cable, Ethernet adapter, Alexa Voice Remote, and will begin shipping out to customers on June 21. Anyone who buys the device and registers it by July 1 will get a $10 credit for Prime Video.

Tag: Amazon
Discuss this article in our forums