Nissan shares its vision for our autonomous EV future at CES

But even among the most adventurous concepts floated at this year’s trade show, Nissan’s vision for the future stands out. One in which driver and vehicle could someday work in perfect harmony, thanks to a brain machine interface that instantly translates your thoughts into the vehicle’s actions. It’s one of a number of ideas the company is pursuing, Alfonso Albaisa, Nissan’s global head of design, explained to Engadget as we walked around an IMx concept vehicle mock-up at the Nissan booth.

The IMx, much like Byton’s recently unveiled Concept SUV, is packed with sensors and ringed with cameras — everything you’d expect an autonomous vehicle to come equipped with. But it’s what Nissan does with that data that’s novel.

“If someone walks on the other side, you can see them walking through the wood [and LED-screen paneling on the interior of the passenger side door],” Albaisa explained. “Because what happens, especially on an SUV, is the visibility around the car below is not so good. So if a child or something is walking, you don’t see them.” But with this system, the driver can monitor the sides and rear of the vehicle in real time, without having to adjust the side-view mirrors. That’s a good thing, given that the IMx forgoes its exterior mirrors in favor of cameras. Unfortunately, neither Nissan’s nor Byton’s vehicles will be going mirrorless anytime soon, due to federal NTSB regulations.

Albaisa sees electric-vehicle and autonomous-navigation technologies as intrinsically linked. “The EV has inspired everyone to bring other innovations,” he said. “Because autonomous driving and EV, they’re kind of related in the sense that the issue of drive-by-wire, ship-by-wire, it’s usually linked. And to ensure that autonomous EVs operate safely, “you need those kind of intelligent controls systems,” Albaisa said.

The spread of EV technology will have a number of impacts on the design of tomorrow’s vehicles, often in ways that the public might not initially appreciate. “The fact that the floor [of the IMx] is completely flat is a major deal for the people in the car companies,” Albaisa said. “Because usually you have to deal with exhaust, with transmissions, and drivetrains. We don’t have any of that in the future. So you’re able to have this completely open space” in the vehicle’s interior that opens up a slew of unconventional configurations, with seats that rotate or recline completely flat. 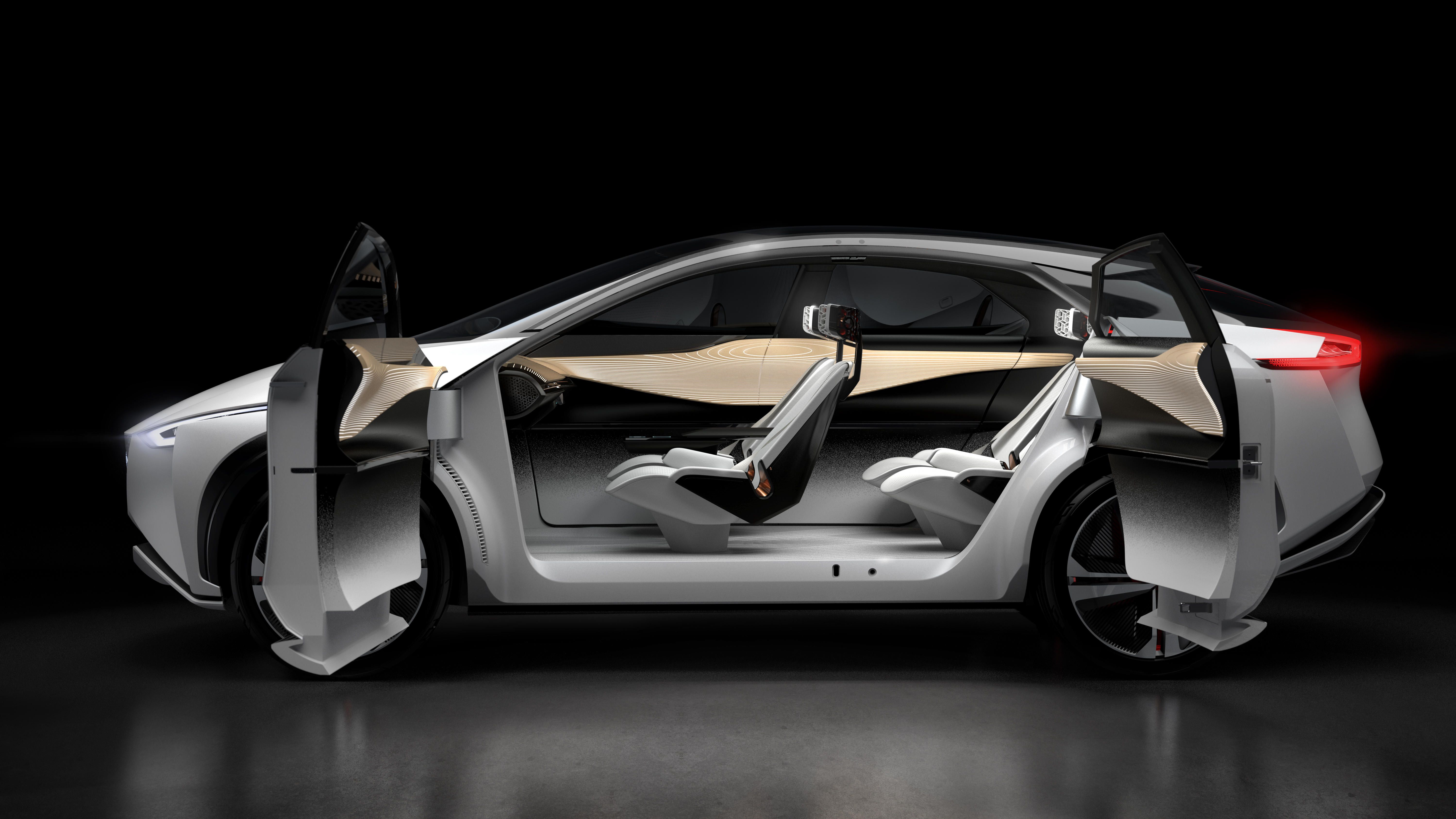 “Also, the EV models are getting smaller and smaller,” Albaisa continued. “Eventually [the electric engines are] going to jump into the wheels. This is the next big thing… it is going to then free up most of the [vehicle’s interior] volume.”

While Albaisa credits the interplay between his team and Nissan’s engineering department with continually generating new ideas, he doesn’t limit his inspiration to the automotive industry. Narration has emerged as a potent ideal in Albaisa’s designs. “One of the things that I do now is hire filmmakers,” he said, because of their ability to tell stories.

The problem Albaisa hopes to address here is how to help drivers make sense of the myriad disconnected pieces of information generated during an autonomous car ride. “There’s a bunch of information that’s not related,” he lamented. “There’s the speed of technical issues within the car, there’s also where the car is going, all of the data from the cloud, all the apps, the curiosities of the customer, not related.” Albaisa argues that the storytelling skills that filmmakers possess could help the drivers of tomorrow to more easily and seamlessly understand what is happening in the car around them.

For example, he points to the distracted-driving issue as a way in which seamless transitions might make driving safer in the future. “People are expecting to be able to access Instagram and Facebook while they’re driving. That’s the definition of distraction,” he said. Car companies must make it so that drivers can access the information they want — whether on a central display cluster or otherwise — without losing focus on the road and without irritating the vehicle’s occupants.

Autonomous navigation can be applied in this situation, enabling drivers to safely take a break from actively driving, get their social media fix and then retake command of the vehicle. Unfortunately, “the customer doesn’t understand why you need to transition,” he said; they simply expect things to work.

The other major obstacle facing Albaisa’s team is one of weight. Take the vehicle’s wheels, for example, which are among the heavier components in a modern car. Nissan engineers are currently exploring new materials such as composite plastics and thinner, lighter designs that offer the same structural integrity and performance as a standard alloy rim but at a fraction of the weight. 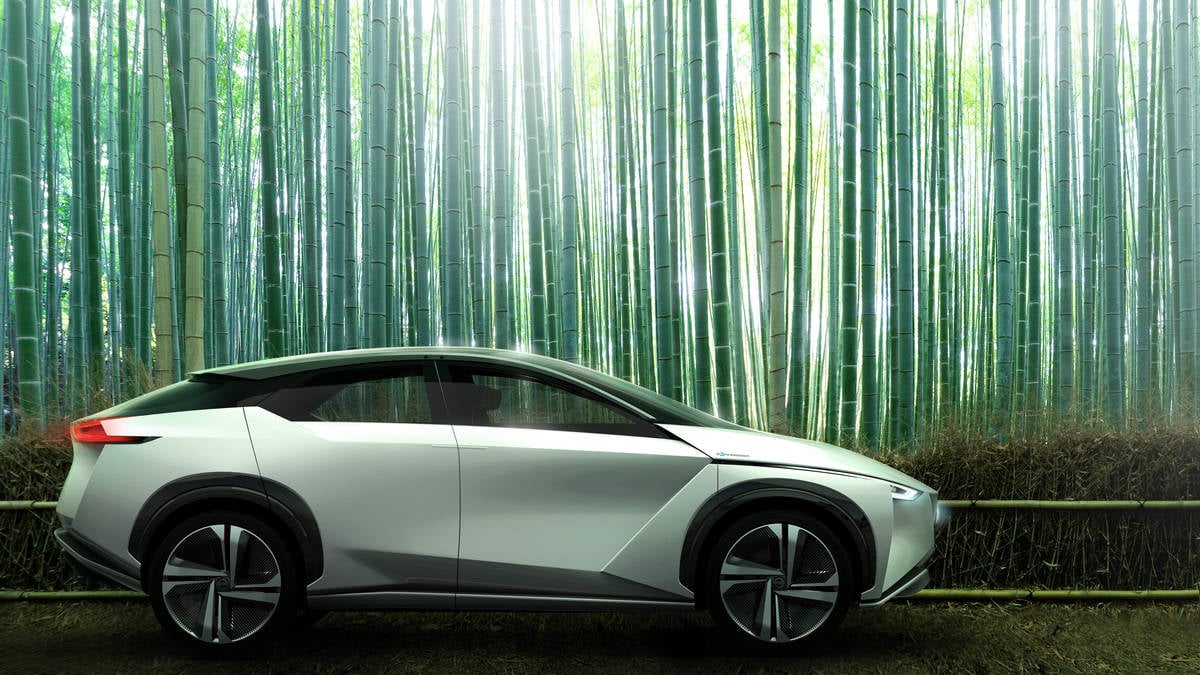 But it’s not just wheels, mind you. “I don’t know how much people feel it, but for us in the companies, everything is in play,” he said. “Everything has to be thought about in a different way.”

Take an action as simple as opening the door, for example. The IMx doesn’t actually have any door handles. Instead, cameras mounted in the B-pillars will scan the driver’s face as he approaches, leverage facial-recognition algorithms to confirm his identity, then automatically pop the door open.

“You just have a solenoid lock that releases the door and just opens it a little bit using the hinge geometry. It’s cool, but also it’s a massive weight reduction,” Albaisa said, pointing out that such a design conforms to his ideals of seamlessness. The same is true for the interior, where, despite individual pieces being small and light, removing the various plastic bits in the cabin can add up to significant weight savings.

The trick moving forward, Albaisa believes, will be one of balancing cost and quality. “At the end of the day, the customer expects the car to be the same price,” he said. “We’ve actually started loading things that are, you know, screens — these are not free. And the computing power to operate screens and to operate apps is expensive.”

“So that’s the biggest challenge we have,” Albaisa concluded. “How do we do these things in a way that is affordable to people? Because it would be a shame if all of these technologies are only for the rich.”