The second season of Stranger Things takes place in 1984, in a carefully curated world of mullets, muscle cars and arcades. Pick any scene, study it closely, and the obsessive attention to detail becomes clear: Yard signs proudly read, “Reagan/Bush ’84;” Family Feud plays on a bulbous TV screen beneath rabbit-ear antennae; soda cans are scrawled with the era-appropriate logos. The clothes are right, the hair is right (yet so, so wrong), and Stranger Things 2’s universe works perfectly as a 1980s nostalgia bomb. It all makes sense.

However, some of these details serve a purpose beyond world-building. The communication gadgets in Stranger Things 2 — walkie-talkies, a police radio and a video camera, specifically — aren’t simply clever nods to a bygone 8-bit time. These pieces of technology drive the story and shape the main characters on a fundamental level. They’re not just nostalgia. They’re necessary.

And, taken together, the walkie-talkies, radio and camcorder serve as a handy stand-in for a contemporary mode of communication: the cellphone.

While we’ve tried to avoid any spoilers in this story, the following article does refer to scenes and themes throughout the season. 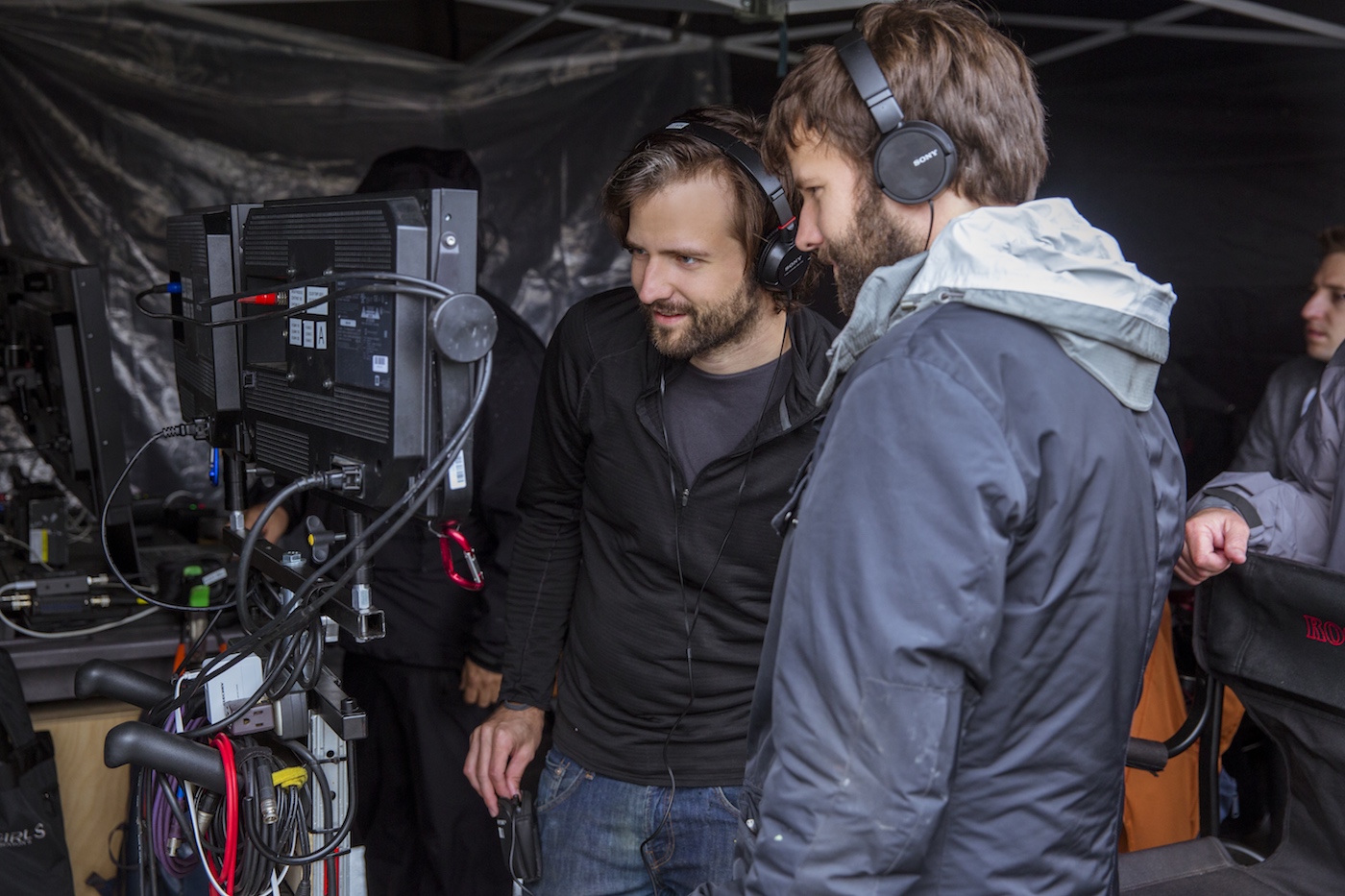 Stranger Things creators Matt and Ross Duffer were born in 1984, meaning their formative years were spent on the cusp of the cellphone boom. They were 16 when the Nokia 3310 hit the market and 20 when the Motorola Razr came out. For the past decade or so, they’ve lived with the rest of us in a post-cellphone world, with instant, constant access to reliable voice, text and visual communication tools.

It’s possible that the ubiquity of cellphones in our lives has altered the way we — and the Duffer brothers — think about the past. Cellphones are so ingrained in our daily routines (often the first thing we look at in the morning and the last thing we see at night) that it’s easy to think it’s always been like this. Modern cellphone technology didn’t exist in 1984, but subconsciously, we still want the people of that time period to behave as if they had supercomputers in their pockets. New habits die hard.

Cellphones are also brilliant for storytelling purposes, at least when it comes to connecting characters and pushing the plot forward. The Duffer brothers aren’t the only directors to use walkie-talkies and other ’80s gadgets as rudimentary mobile phones, but Stranger Things 2 leans heavily on these tools. The main characters essentially end up using cellphones in every episode. 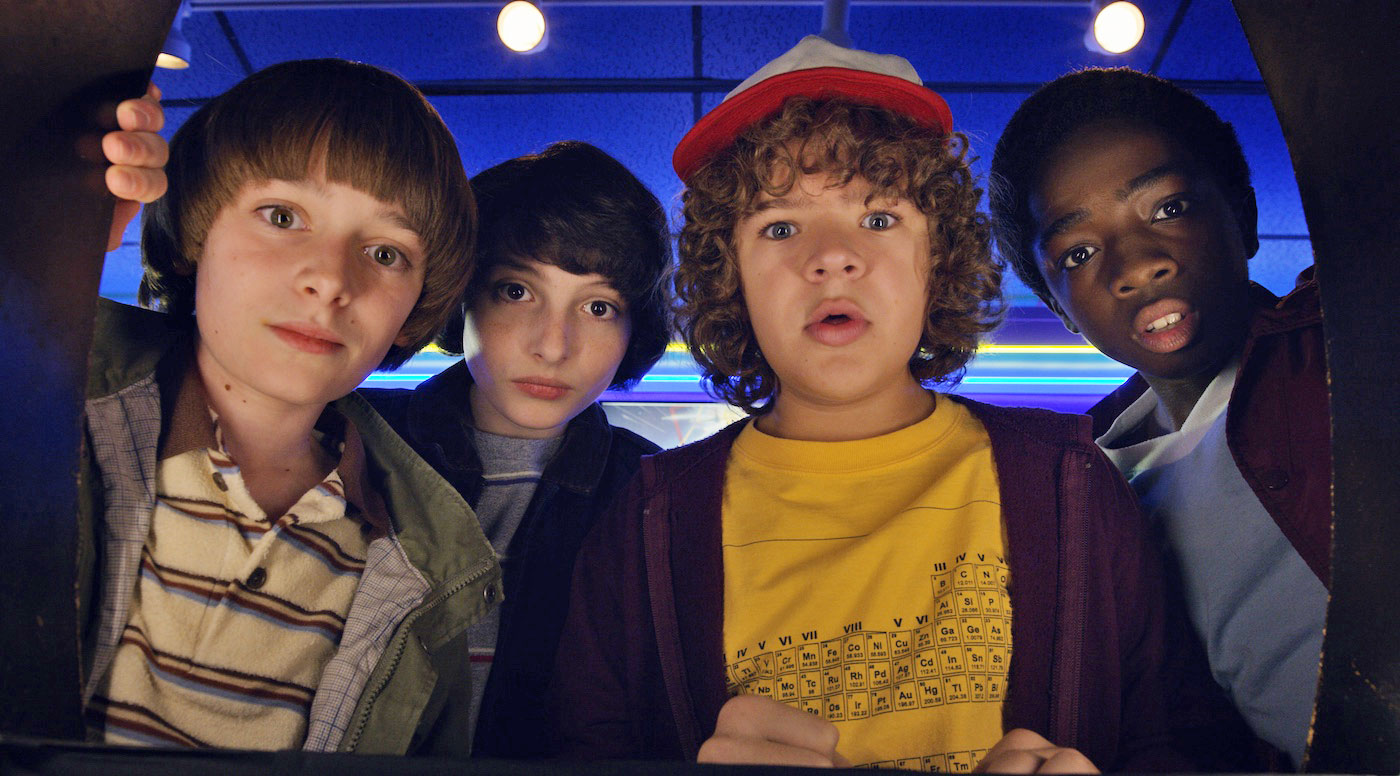 Take the first time we see the kids, for example: Dustin is running around his house, collecting quarters for the arcade and scheming with the gang on their walkie-talkies. In a modern-day version of Stranger Things 2, those bulky bricks would be Windows Phones (and at one point, the camera would linger just a second too long on one of the screens, Microsoft’s logo in clear view).

Dustin even connects his walkie-talkie to a headset, running around the city of Hawkins and talking to his friends hands-free. This is in a time when pagers were just catching on — and here’s this 13-year-old dweeb standing at the edge of the forest, having a crystal-clear, hands-free conversation with one of his best friends who’s miles away.

Walkie-talkies are pivotal to the season’s pacing, allowing the kids to easily communicate with one another and giving them the power to drive the story. It’d be easy to simply hand the kids this technology without addressing the apparent magic at work, but the Duffer brothers fold the gadgets into the characters themselves. Will, Mike, Lucas and Dustin are all noted nerds, but Dustin is especially curious — and he makes the walkie-talkies fit in this world.

Dustin is in AV club with the rest of the kid crew, but he’s also the DM of their Dungeons & Dragons game with an encyclopedic knowledge of that universe’s lore. He’s a bookworm and holds the top score on Centipede at the local arcade. His mom isn’t surprised when he says he added a motor to the ghost trap he built for his Ghostbusters costume — to make it look like there’s a ghost rattling around inside, of course. 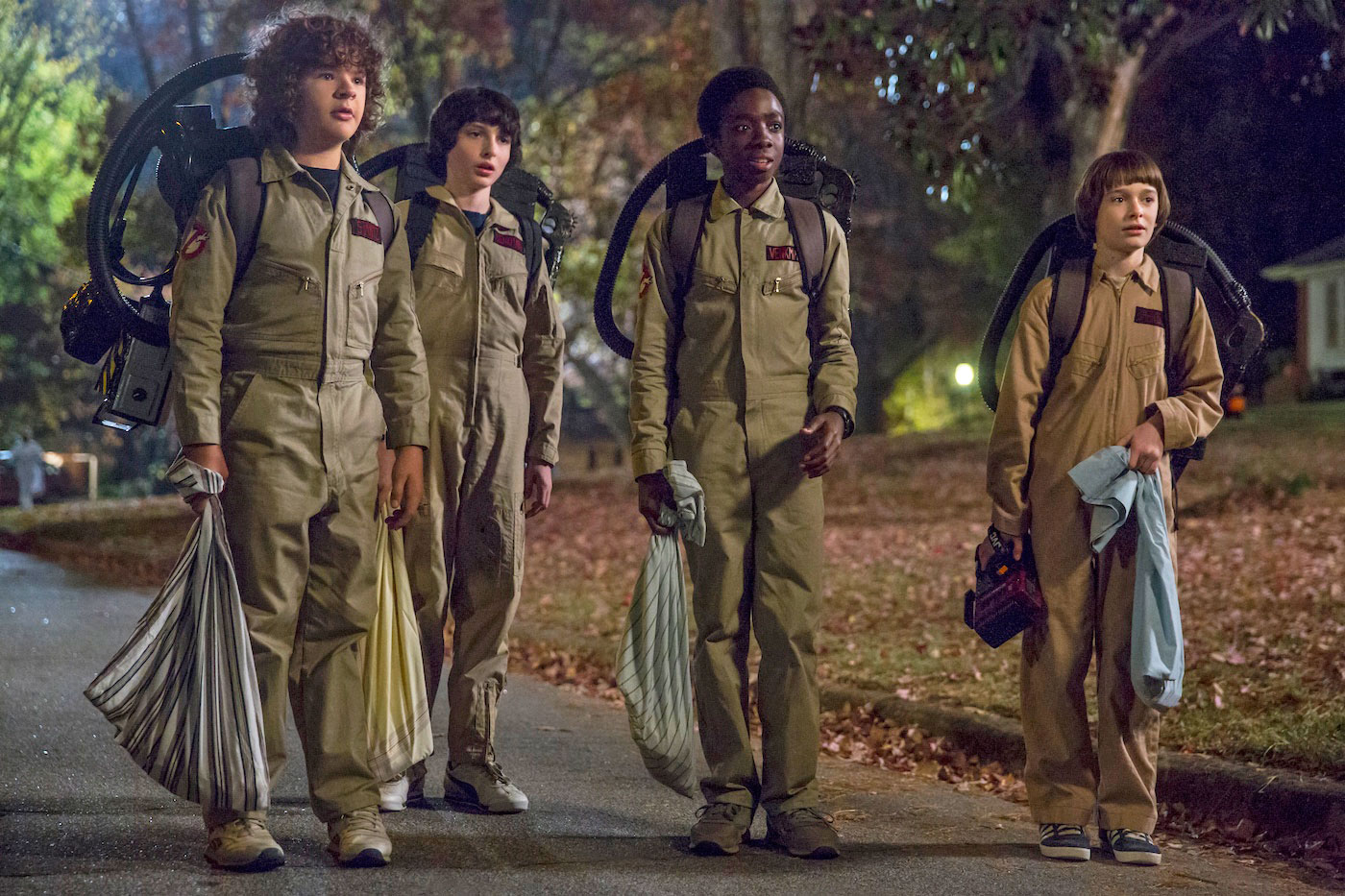 Dustin isn’t technologically savvy simply to round out his character bio — his know-how explains away the gadgets that propel Stranger Things 2 into a rapid-fire thriller. With Dustin on the squad, long-range, reliable walkie-talkies aren’t a total stretch.

Walkie-talkies are just one piece of the cellphone puzzle in Stranger Things 2. Police chief Jim Hopper communicates with the kids via his radio, using Morse code to tap out messages in starts and stops. It sounds a bit like texting, when you put it that way — but Morse code is an old, established form of communication. It’s inelegant yet reliable, a lot like Hopper himself. And, just like the good detective, Morse code plays a critical role in the second season’s story.

Modern cellphones wouldn’t be complete without a video camera, and neither is Stranger Things 2. One of the series’ newcomers, Bob (played by Sean Astin), introduces a JVC camcorder to the Byers family, allowing Will to accidentally capture a significant encounter on film. If Stranger Things 2 were set in 2017, Will would’ve simply recorded this scene on his cellphone. But in 1984, the Duffer brothers needed to give Will a reason to have a camcorder in the first place — and so they gave him Bob, another nerd whose mere existence explains away some of Stranger Things 2’s cellphone-style tech.

The JVC plays into Bob’s personality perfectly. He’s a small-town genius with a map of Hawkins in his head, working a cushy job at RadioShack. He had to be, in order for the camcorder to make sense. 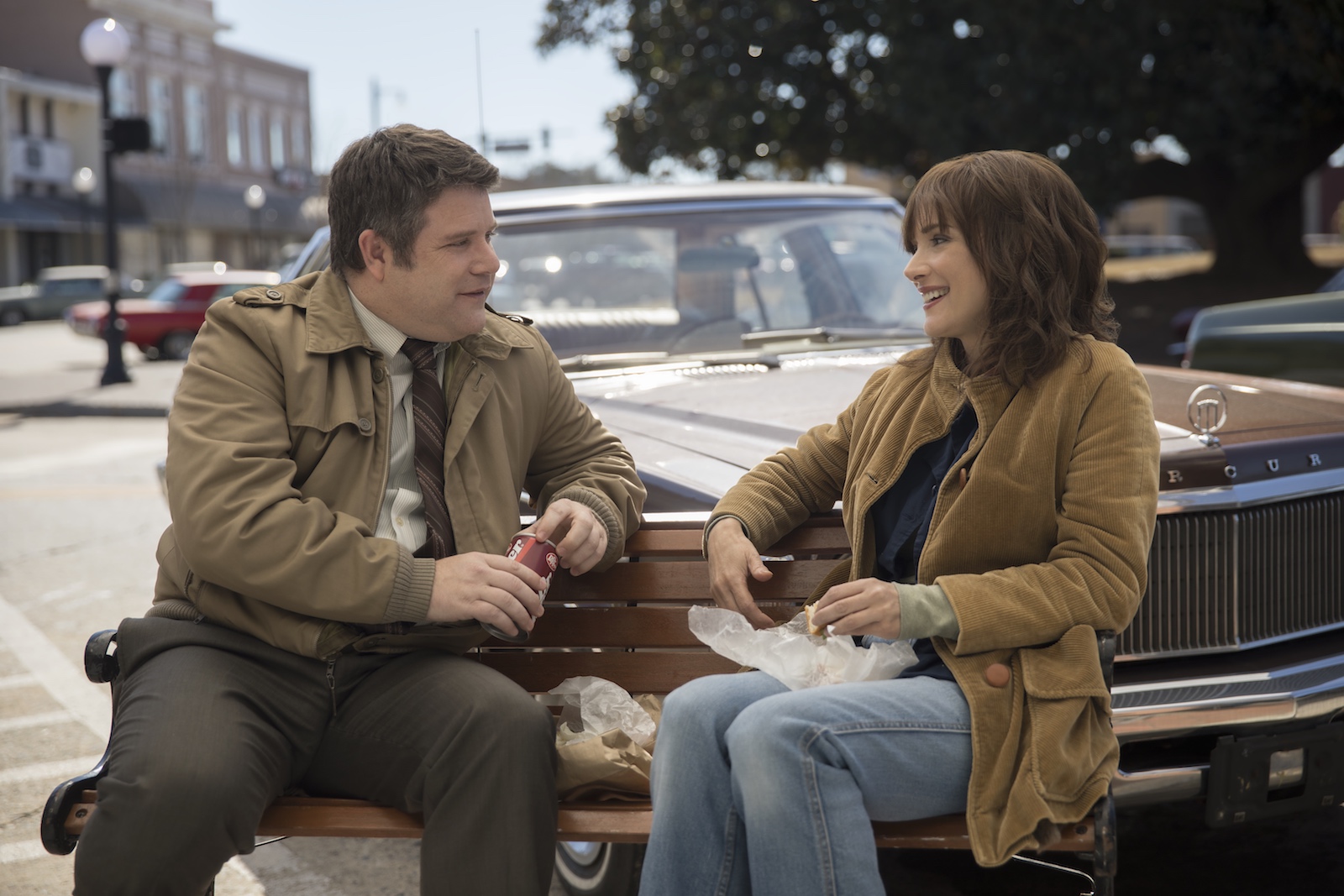 Once it’s in the Byers’ house, the JVC allows Will’s mom, Joyce, to express her newfound happiness with Bob. Through the camera’s lens, Bob and Joyce laugh and flirt; their budding romance is captured in grainy VHS footage that’s instantly relatable to viewers who grew up without professional-grade cameras in their pockets. The JVC grounds Stranger Things 2 in the ’80s while believably growing Bob and Joyce as rich characters with the potential to lead happy lives, if monsters from another dimension weren’t trying to destroy everything they love.

Stranger Things 2’s nostalgia works because it makes sense. The walkie-talkies, police radio and camcorder aren’t there to simply fill space or jog the audience’s memory — they all serve specific, crucial purposes in the overall story. More than that, these tools belong in these people’s hands. The characters of Stranger Things 2 were crafted to create a robust, nerd-infused universe filled with throwback technology. They were crafted to support a cellphone-style ecosystem — in 1984.

Read more from News
← Play the first set of original Xbox games on the Xbox One tomorrow
FBI tried and failed to unlock 7,000 encrypted devices →