Star Wars: Battlefront did a lot of things right, but it was criticized for not having a lot of depth, primarily due to the utter lack of a story-driven single player campaign. That’s a shame, because the Star Wars universe is rich enough that fans are genuinely interested in stories that go far beyond what’s presented in the main film series. Fortunately, for Star Wars: Battlefront II, EA developer Motive was tasked with making a compelling story mode. Having completed a 90-minute playthrough of the game’s prologue and first two chapters, it’s safe to say that Battlefront II should have something to lure Star Wars fans who aren’t necessarily interested in multiplayer adventures.

As we learned back at E3, the Battlefront II campaign centers around the Imperial forces and “Inferno Squad “Commander Iden Versio. In a lot of ways, the campaign feels like 2016’s Rogue One in that it shines a light on parts of the Star Wars world we haven’t seen — but it seeks to tie them into the larger narrative that we know from the films. In this case, Versio is leading her Imperial Squad on a mission on Endor when suddenly, the Death Star explodes. Yup, the game is picking up at the end of Return of the Jedi, showing things from the perspective of an Imperial army suddenly thrust into disarray, with their leader dead and most advanced weapons destroyed (again).

The missions themselves don’t do a ton to hint at where the story will go. The prologue and first chapter focus on Versio’s escape from the clutches of the Rebels and her team’s escape from Endor, while the second chapter is largely focused on space combat in Versio’s TIE Fighter. From a pure gameplay perspective, it’s a good start that introduces what I presume will be the game’s core components.

For starters, I got to pilot Versio’s droid in a stealth mission sneaking around Rebels as I tried to free her from prison. After that was the expected combo of stealth and blaster battles as I escaped Endor. The game lets you switch between first and third person while controlling Versio; being able to go into first-person mode definitely helped when I was dealing with a slew of enemies. Finally, the TIE Fighter sequences introduced the game’s space dogfights, something that was definitely fun but also a bit frustrating, as I kept piloting my TIE Fighter into other ships or large space debris, earning me an instant death. 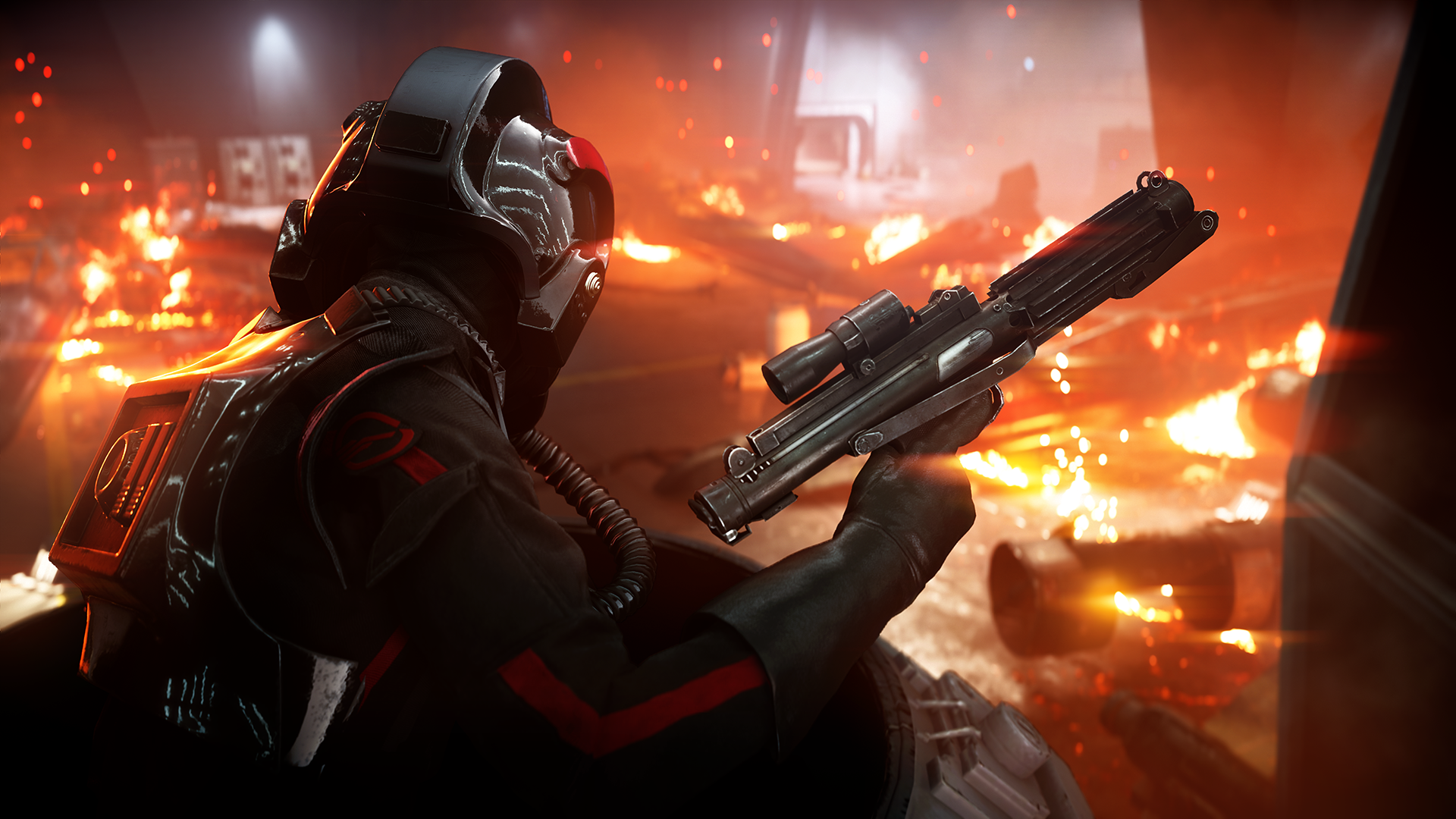 The more traditional ground-based combat segments were easier for me to handle, and they also quickly showed off the various ways you can customize Versio to suit your play style. Naturally, she can carry several different weapons that can be found around the levels, including balanced blasters, faster automatic weapons and long-range sniper-style guns. But Versio also has a handful of special weapon slots that that let her equip more powerful items, like a shotgun-style blaster that quickly takes down opposing soldiers. There’s also a tool that aids with stealth missions by revealing the positions of all enemies within a limited range so you can see who’s coming and what areas you might want to avoid.

To keep things balanced, you can’t use these special skills indefinitely — they all have cool-down timers to keep you from being too powerful. But in just a few chapters of play I already had more skills than I could equip at one time, which added a nice bit of flexibility to the game; it feels like it’ll allow players to approach the game in entirely different ways.

Overall, the game played well and felt polished — but that’s table stakes for a major studio like EA. The bigger question is, how will this work as an entry into the Star Wars universe? Specifically, I was wondering how much interest players would have taking the side of the Empire when basically all of the major pieces of the Star Wars story are from the perspective of the Rebels. Playing the “bad guys” could be fun, but how satisfying would that story be in the end?

“I think Star Wars fans are generally hungry for new characters and new stories,” Motive Game Director Mark Thompson told me after I had finished my playthrough. He thinks that hunger will give them the freedom to pull of a story where you play an elite member of the Empire. “It’s a new perspective on the galaxy,” he added. “What was it like to be a trooper in the Empire when everything went wrong, when the Death Star exploded, when Palpatine died, when Vader was dead. What does the Empire even look like after that?”

That’s a good question, and a final cutscene that we saw made me even more intrigued about where the story would go. Some seeds of doubt about how long Versio would stay loyal to the Empire were definitely sewn, though I haven’t seen enough to make more than a vague guess about where the story is headed. 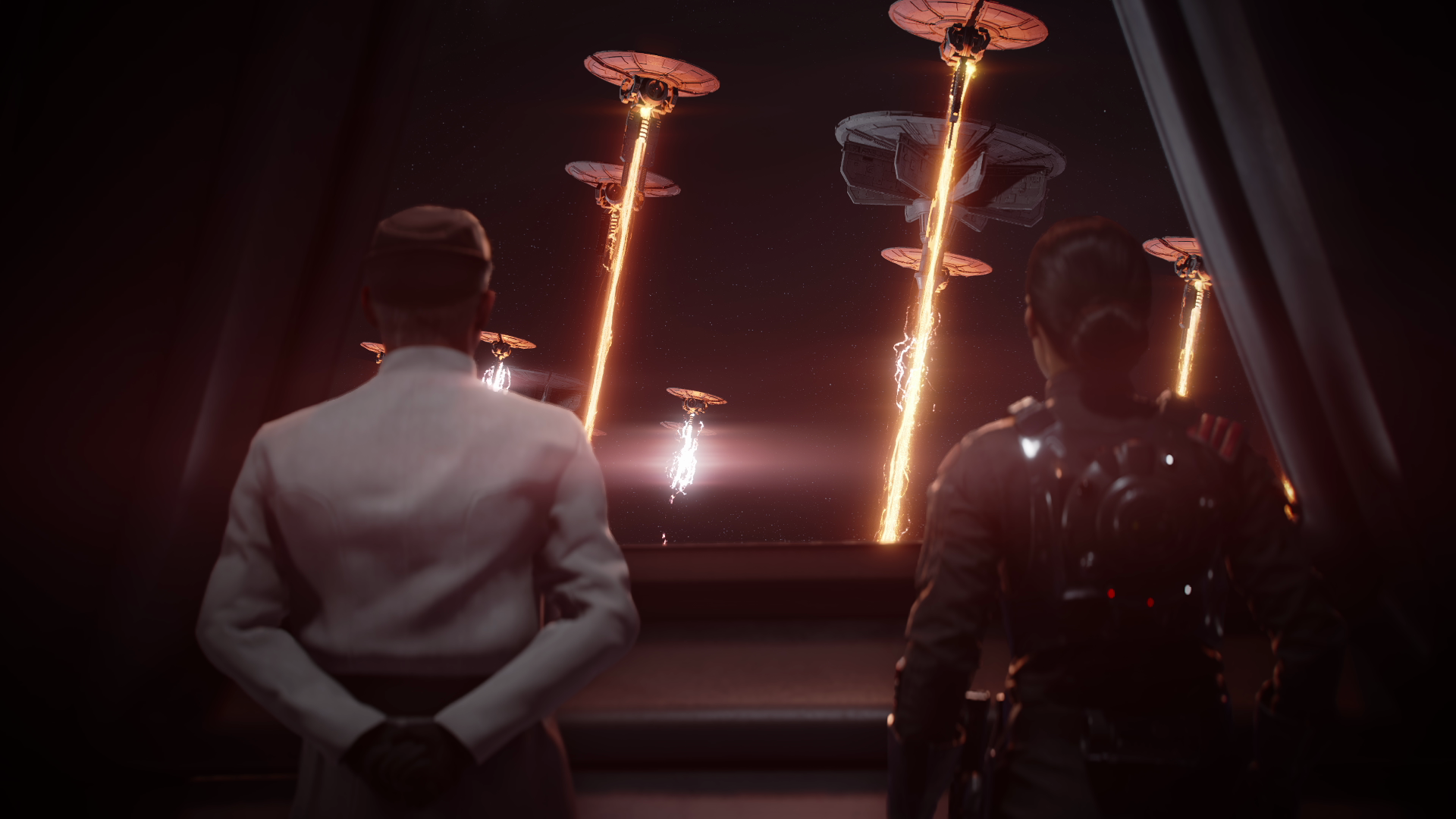 And for those who crave more direct ties into the Star Wars universe they know from the films, Thompson notes that Versio won’t be the only playable character in the campaign. “You do actually play as the iconic characters,” he said. “There are chapters in the campaign where you get to play as people like Luke Skywalker.” I didn’t get so far as to confirm that you get to play as Skywalker himself, but there’s a strong implication that you’ll get to meet and play as familiar characters from the original trilogy — something that would fill in the scant bits of info we know about Luke, Leia, Han and the rest of the crew between Return of the Jedi and The Force Awakens.

But Motive isn’t interested in just letting you replay notable scenes with classic characters. If those familiar faces are being used in the game, it’ll be in entirely new situations; conversely, with new characters like Versio, Motive felt comfortable showing events we’ve already seen, because it’s from an entirely new perspective. “We can take Luke Skywalker somewhere you’ve never seen him before, doing things you haven’t seen him do,” Thompson said. “Whereas, with Iden, we can take her unfamiliar perspective to a familiar event or location like Endor and do something that’s new and different.”

Even after just 90 minutes of play, Battlefront II feels like a new direction for a Star Wars story. It’s hard to miss the fact that the goal is to gun down Rebels, the same troops you’re rooting for when watching the Death Star blow up at the end of Return of the Jedi. Smooth and varied gameplay are obviously key to making Battlefront II a success, but a new, intriguing window into the Star Wars universe is what will really make the game stand out for legions of fans. At the very least, it should help you get your fix in the weeks before The Last Jedi hits theaters.