Space is no place for battles of the bulge. That’s why NASA insists on getting its astronauts into peak physical condition before sending them offworld. But aboard the ISS, in a living space the size of a football field, the human body will readily go to pot. So how did Peggy Whitson, the longest-orbiting astronaut in American history, manage an astonishing nine and a half months in microgravity without having her body and mind atrophy? She hit the astronaut gym. Yes, of course, there’s a gym on the ISS — just, no lap pool.

The human body, built as it is for terrestrial life on Earth, does not readily adapt to the rigors of microgravity. Half of all astronauts suffer from Space Adaptation Syndrome (SAS or, more commonly, “space sickness”) for the first few hours their missions, at least until their vestibular systems readjust to the weightless environment.

Fluid redistribution is another common issue. Since there’s no gravity for the body’s blood pressure to fight against, fluid becomes more distributed throughout the body — that is, it leeches out of our veins and cells. The human body can lose up to 22 percent of its plasma, the juice that carries our red blood cells through our circulatory system, and the results are not good. Especially when astronauts return to Earth. While still in space, the heart can begin to atrophy thanks to there being less blood to pump. This can lead to a condition known as “orthostatic intolerance”. 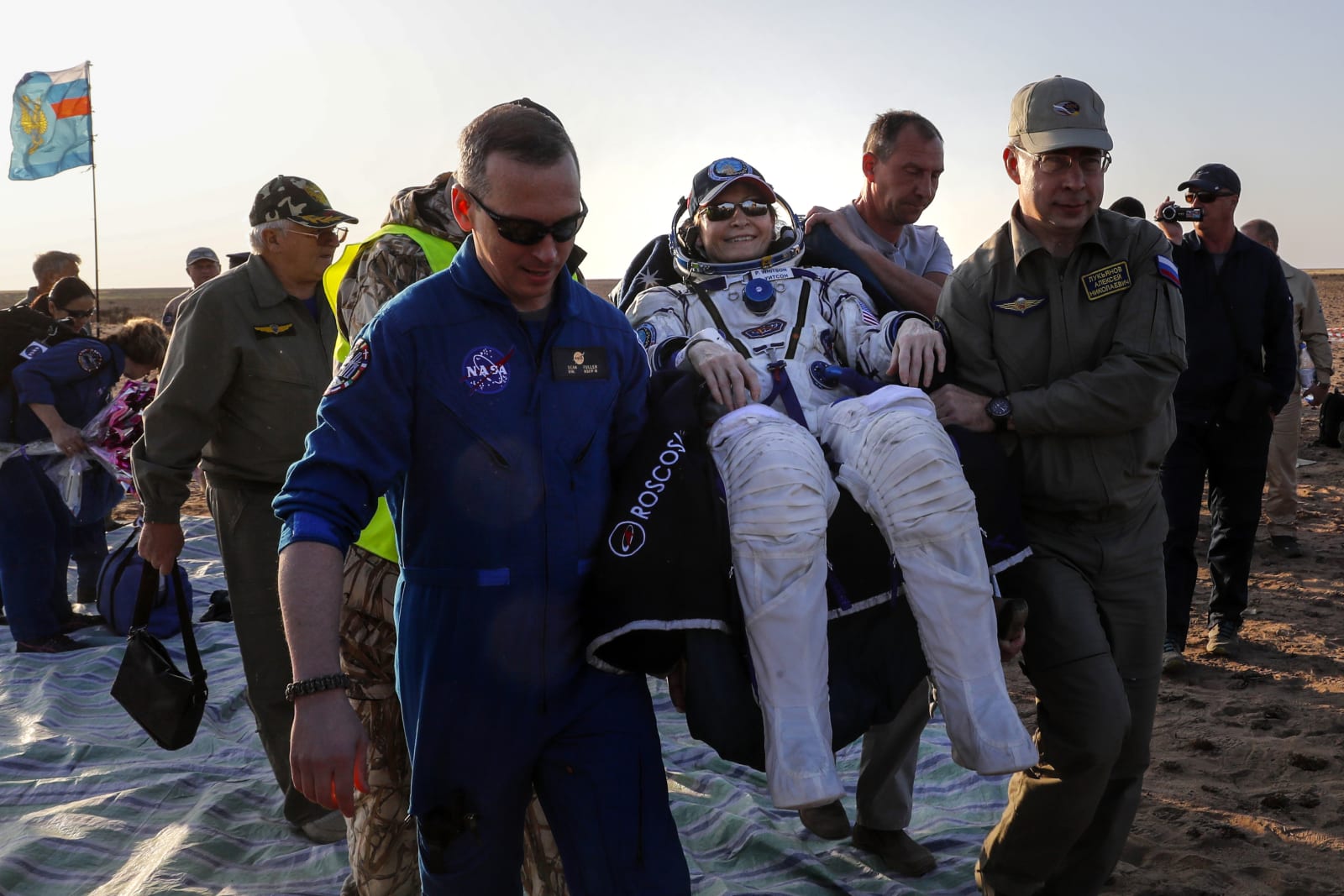 “When you lie down, stand up quickly, and feel light-headed, that’s orthostatic intolerance,” Don Hagan, director of exercise physiology at Johnson Space Center, said in a 2002 statement. “Your body tries to stop this from happening. It does so by increasing its heart rate and blood pressure to keep more blood returning to your heart.” If not, down you go. But exercise can help prevent fainting by increasing blood volume and circulation.

Back on-planet, the astronauts’ symptoms, unfortunately, will continue for a time. They may have difficulty standing for more than 10 minutes without fainting because all the leaked fluid will pool in their lower extremities (thanks, gravity), which results in orthostatic hypotension.

That fluid shift can cause other issues as well. It greatly increases the amount of intracranial pressure, flattening the eyeball to the point of potentially crushing the optic nerve. In fact, when NASA surveyed 300 former astronauts, 23 percent of the short-flight (sub-6 month) and 49 percent of the long-flight astronauts mentioned that both their near and distance vision had been impacted during their flights. And, for some, the issues continued for years after.

After I got back, I’ve talked about just being really sore and stiff. My skin had not touched anything in 340 days except just your clothing. Anything it touched, it felt like it was on fire. I actually had some rashes and kind of discoloration anywhere I had contact. And then I kind of had flu-like symptoms for a few days. Had I not been in space for a year and I knew what this was, I would have gone to the emergency room and said, “Hey, I don’t know what’s wrong with me, but I’m not feeling that great.”

Perhaps most alarming is the rate at which muscles and bones, not just the heart, degrade when deprived of Earth’s gravitational attraction. “Among the biggest changes we see is in the skeletal system with bone loss, and the muscular system with muscle lost and strength lost,” Dr. Richard Scheuring, a NASA flight surgeon, told Engadget. “Those are the two things that really persist. The cardiovascular deconditioning missing just because you’re not working as hard. It seems to level off at about three weeks and we don’t seem to really get any worse.”

“We think there are also changes occurring that bone marrow that affect the production of red blood cells so you get what we call spaceflight anemia,” he continued. “But it doesn’t really have physiological or performance impacts and is pretty well tolerated among a healthy population.”

What does have a psychological effect on astronauts aboard the ISS is the speed at which they orbit: roughly once every 90 minutes. That breaks the day into 45 minutes of light and 45 minutes of dark and can cause some wicked jet lag. To that end, NASA is working with Harvard to study how best to counter the station’s insomniatic effects.

One such system, Scheuring explained, involves using ambient lighting of varying wavelengths. That is, the lighting will be further along the blue-green end of the spectrum to simulate bright morning sunshine which increases the astronauts’ alertness. “That blue light is the equivalent to a cup of coffee,” Scheuring explained. The wavelength then fades towards the red end of the spectrum in the afternoon to dusk hours to boost the body’s melatonin production, which helps us sleep. 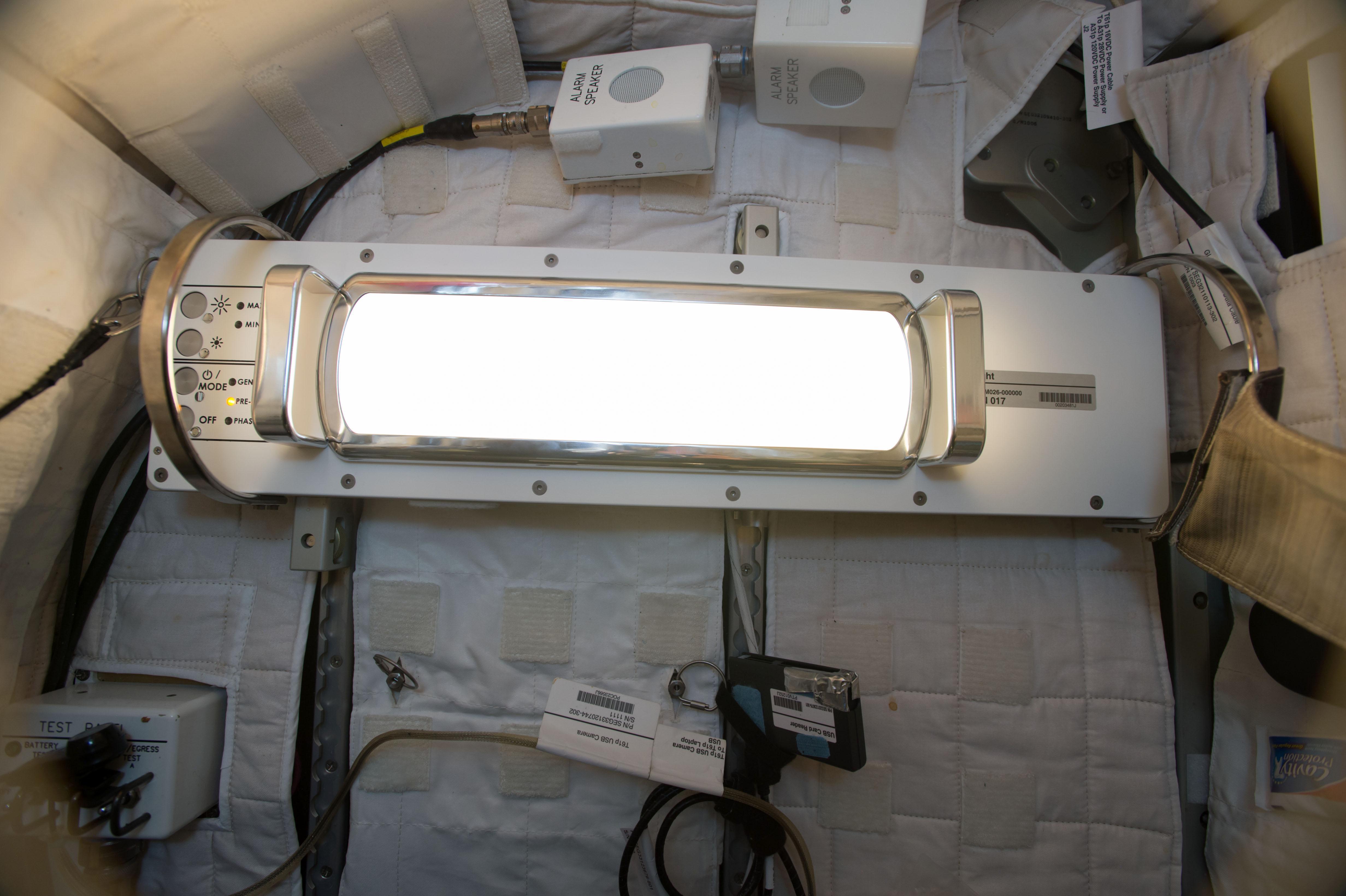 Despite the current two-and-a-half-hour-a-day workout regimen demanded by the agency, spending six months in space can see the average astronaut lose between 11 and 17 percent of their strength, around 10 percent of their endurance, and two to seven percent of their bone density.

Before NASA introduced these countermeasures, astronauts were losing one to three percent of their bone density per month, Scheuring explained. “To put that in perspective, a 55-year-old postmenopausal woman loses one to two percent of her bone density every year.” What’s more, that discarded calcium winds up in the kidneys, in turn greatly increasing the chance of the astronauts developing kidney stones.

But that’s where the orbital gym comes in. Crews have access to three pieces of exercise equipment: a Cycle Ergometer (read: a stationary bike); an anchored treadmill equipped with a restraint system that enables astronauts to mimic the effects of gravity as they run; and the ARED (Advanced Resistance Exercise Device), a “weight lifting” system (to the extent something can exist in microgravity) that relies on flywheels and vacuum cylinders to generate resistance.

Thanks to these exercises, “our crews are coming back in much better shape, they recover much quicker,” Scheuring said. “Generally, if our astronauts stick to our post-flight reconditioning program and they’ve worked hard in space, within 30 days of coming back from a six-month mission, we can have them at their baseline numbers for strength flexibility and stamina.”

The ARED has been in service aboard the ISS since 2009 as the station’s all-in-one strength trainer. It’s flexible enough to accommodate every size of astronaut that’s been aboard and can generate up to 600 pounds of resistance. That draw weight comes from a group of vacuum cylinders attached to a flywheel, which simulates the inertia you feel when lifting on Earth. With the ARED, astronauts can work out all of their major muscle groups, either following a preset routine or simply choosing the parts they want to work on that day. NASA also recently instituted additional abdominal and lumbar exercises to address astronauts’ complaints of lower back pain.

But even with this state-of-the art equipment, NASA is working on ways to keep improving its crews’ fitness. The agency is currently looking at the benefits of high-intensity, low-volume exercise using the ARED, dubbed the Integrated Resistance and Aerobic Training Study (SPRINT). Currently, astronauts aboard the ISS spend six days a week lifting but it’s generally low intensity with lots of reps. SPRINT’s research team has found that cutting back to three days a week but pushing more weights for fewer reps “better protects against loss of skeletal muscle mass and function” than the existing regimen, according to NASA.

This information will prove invaluable as we reach further out into our solar system, sending astronauts first back to the moon and then eventually on to Mars. Just getting to the Red Planet will take at least half a year and the last thing you want to be when setting foot on a new planet is a pudgy, atrophied space explorer.