‘Half-Life 2’ mod puts the sequel inside of the original

The chances of us getting Half-Life 3 or, hell, even Half-Life 2: Episode 3 seem about as likely as the Detroit Lions winning the Super Bowl at this point. To help take some of that sting off, a group of enterprising fans crafted Half-Life 2: Classic, a mod that essentially runs the game in its prequel’s “Goldsrc” engine. It serves as “a way to see what Half-Life 2 could have looked like in the limits of Goldsrc, if Valve never developed the Source engine,” the listing page says. 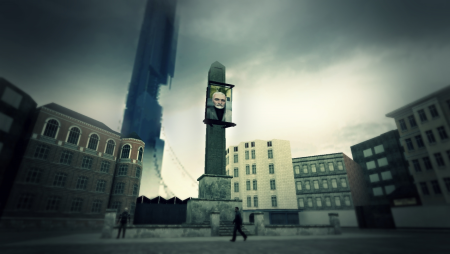 As you might imagine, the game isn’t pretty. But, the end result might make you nostalgic for that resonance cascade we witnessed at Black Mesa in 1998. As Kotaku notes, that original toolset was a mod itself, expanding on the Quake engine’s framework.

When Half-Life 2 was first released in 2004 on its newly developed Source engine, it was a benchmark for what games were capable of in terms of physics, facial animation and overall graphics prowess. That it holds up so well over a dozen years later is a testament to Valve’s design. Based on the video below, Classic is anything but.

The game’s rail-yard opening sequence, with guards knocking people in line and Dr. Breen speechifying from a video screen high above City 17 is intact but it’s a little stuttery, a little soft. What one was a vibrant town square is barren, with a lone guard on patrol and lots of empty space. Some might call Classic janky. Again, that’s the point.

There’s a demo available if you want to give the game a run for yourself, and if you’d like to be a little more hands-on, the team is looking for help. Given Valve’s glacial pace for both development and letting out any updates on protagonist Gordon Freeman’s continuing adventures, your contributions could help this release before the real McCoy does.