By Nick Guy and Kevin Purdy

Over the past two years, we’ve looked at 15 cold-brew coffee makers, analyzed dozens of at-home brewing methods and recipes, made concentrate for more than 300 cups of coffee, and served samples to a tasting panel that included expert baristas. And after all our testing, we found that the OXO Good Grips Cold Brew Coffee Maker offers the best way to make smooth, delicious iced coffee at home. It’s easy to use and well-designed, and in our tests it made cold coffee with balanced acidity, a stronger aroma, and a cleaner finish.

Cold brewing makes better iced coffee than refrigerating hot-brewed coffee. When you add hot-brewed coffee to ice, it slowly dilutes, resulting in a weaker-tasting beverage. Cold brew, which generally starts from a concentrate, is meant to be watered down, so adding ice, milk/cream, and not too much water provides a stronger, more flavorful drink. Additionally, brewing with slow, cold exposure, instead of heat, extracts fewer bitter flavors, so you’ll get a sweeter, milder-tasting coffee that’s better for drinking cold.

Every cold-brew coffee method works the same way: Start with a lot of ground coffee (more than you’d typically use to brew drip coffee), add water, let the mixture sit for eight to 24 hours, and then filter it. What’s left is either ready to drink or, more often, a concentrate that you should dilute with water or milk. 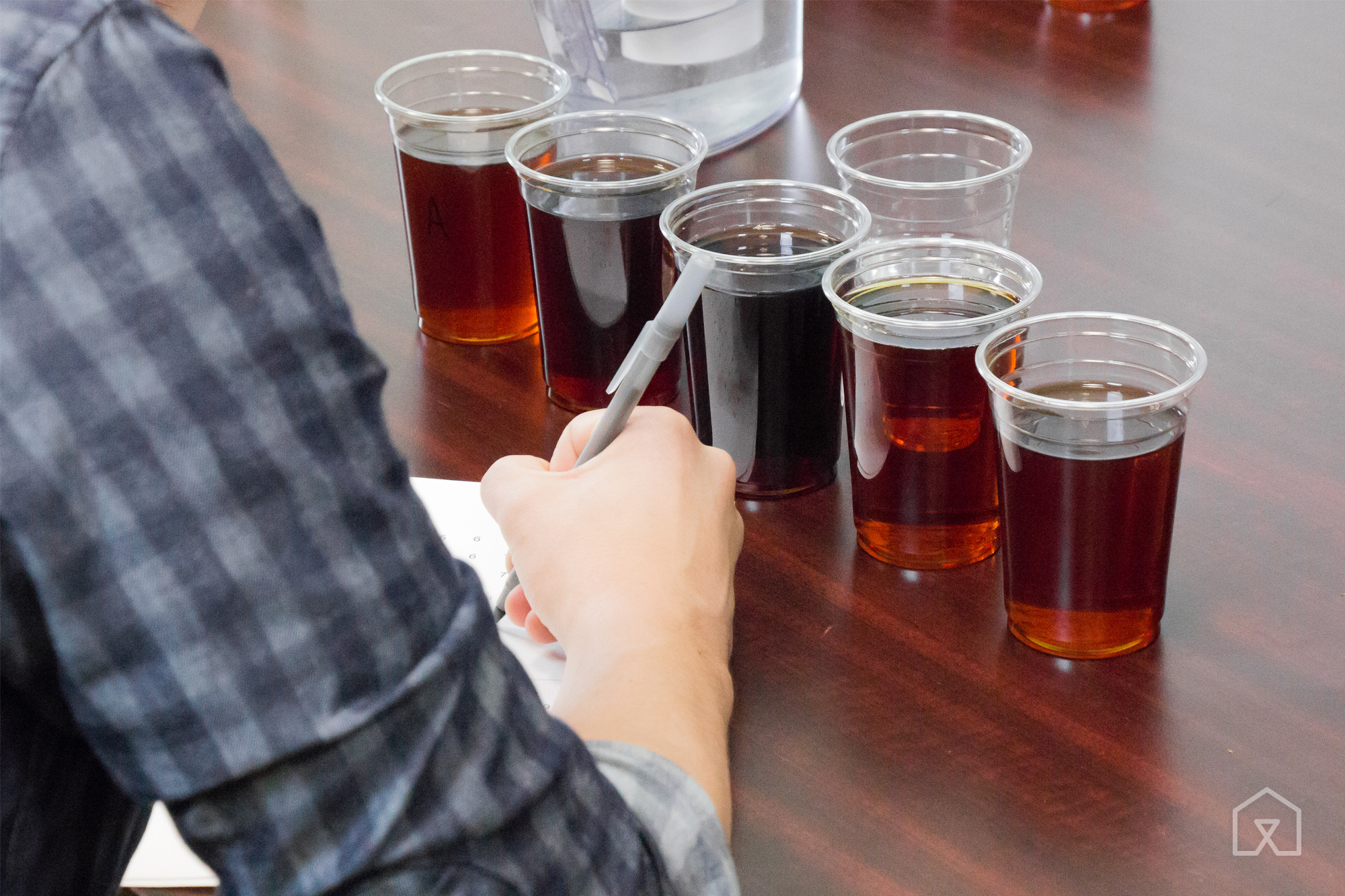 We had panelists do a blind tasting of six cups of cold-brew coffee. Photo: Kimber Streams

We began our research by reading editorial reviews from Cook’s Illustrated (subscription required) and the Wall Street Journal, plus one from Stumptown Coffee Roasters. These reviews helped us determine which cold-brew systems to call in for testing. We first tested each system by following the provided instructions to brew a batch of Trader Joe’s Kenya AA Coffee, noting any inconsistencies or complexities and how easy each system was to clean.

Our next step was a tasting panel. For this round we switched to an upscale bean—Joe Bean Mexico Chiapas—and brewed a fresh batch with each system according to the included instructions, which varied in the ratio of water to bean. We invited coffee professionals, coffee enthusiasts/nerds, and casual cold-brew drinkers to rank each sample on a 1-to-10 scale for taste, acidity, and body, as well as to note which was their favorite and why.

Finally, we conducted a second round of taste testing on our top models. We used medium-roast grocery-store beans from Wegmans brewed with a consistent water-to-coffee ratio (4.5-to-1), averaged from all three brewers’ instructions. We let the samples brew for 24 hours each, diluted the concentrate 3-to-1 and had a coworker serve us blind samples. This round’s results closely matched our original testing panel’s findings. It’s the brewers themselves, not their recipes, that make different cold-brewed coffee. 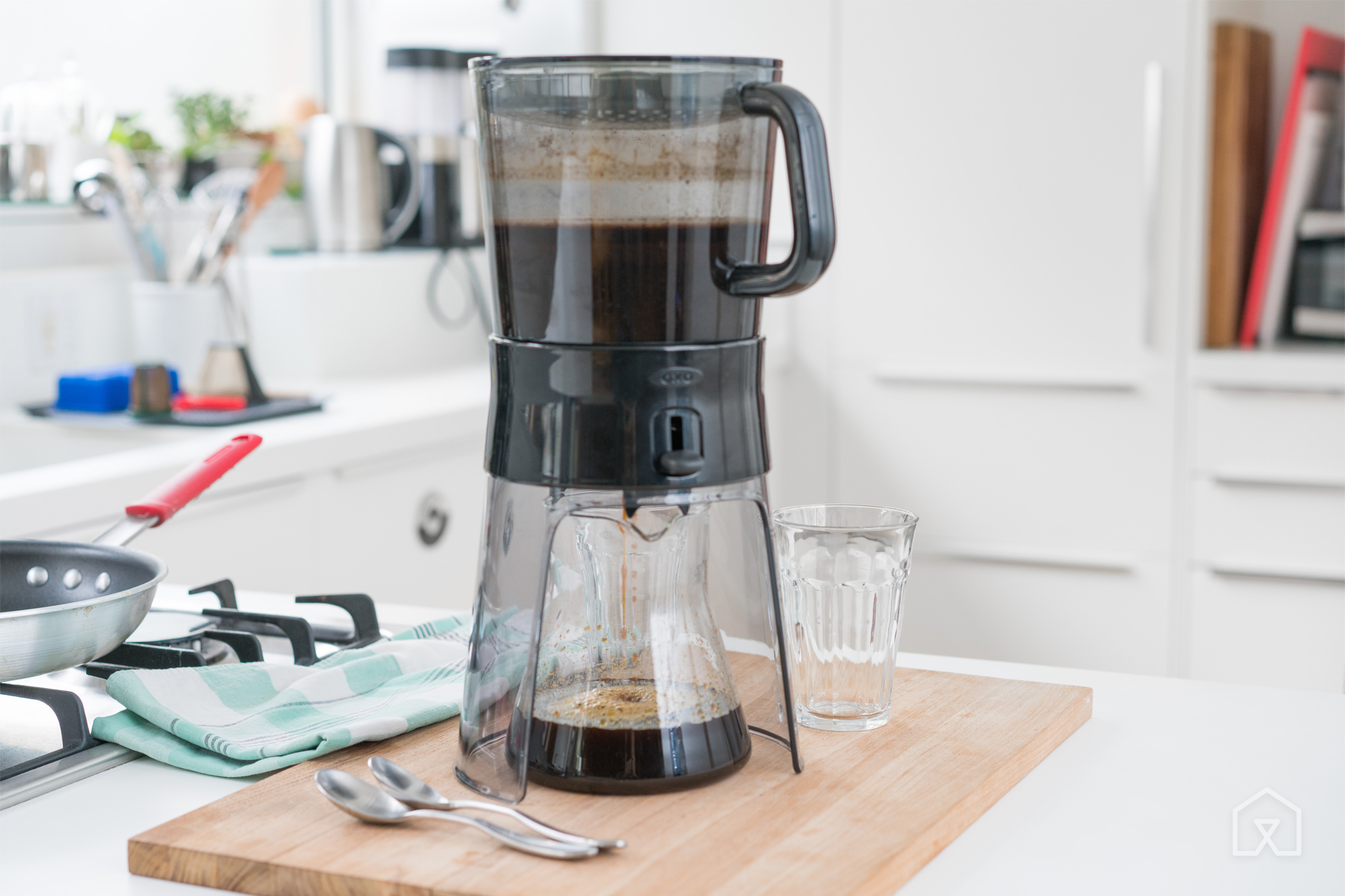 The OXO brewer makes flavorful, money-saving concentrate, looks good on a counter, and is easier to use and store than any other pick. Photo: Michael Hession

The OXO Good Grips Cold Brew Coffee Maker is the best-looking unit we tried, and it has the most thoughtful features for brewing and storing your coffee. It’s easier to clean and store than the other cold-brew makers we tested, and it brings out more flavors from your coffee than other brewers we tried. It uses a metal mesh filter, instead of paper, which seemed to accentuate the flavors. Whether our panel actually liked that bigger flavor is a different story. In our first tasting, two panelists deemed it their favorite, but our coffee professionals were unimpressed and rated it the highest in detected acidity. Evaluating coffee is, of course, a subjective thing, but the OXO model seems to create a brew that was more “punchy” than the mellow, smooth Filtron brew.

The OXO brewer’s vessel is more helpful than most, too. It has extensive volume markings to help you measure water for brewing. It looks nicer than a plastic carafe or a blue-hued jug (as on the Filtron and Bod brewers), has a pouring spout, and fits better on a refrigerator shelf than the tall jug provided with many competing models.

We did experience one snag in brewing with the OXO unit using one of the optional paper filters, which can be placed above the reusable mesh filter to create a smoother brew. In our tests, a silty mudflat of ground coffee accumulated on the filter and blocked the flow of concentrate. An OXO representative and a coworker who uses the OXO brewer both said they’d never experienced a complete blockage when using paper filters. 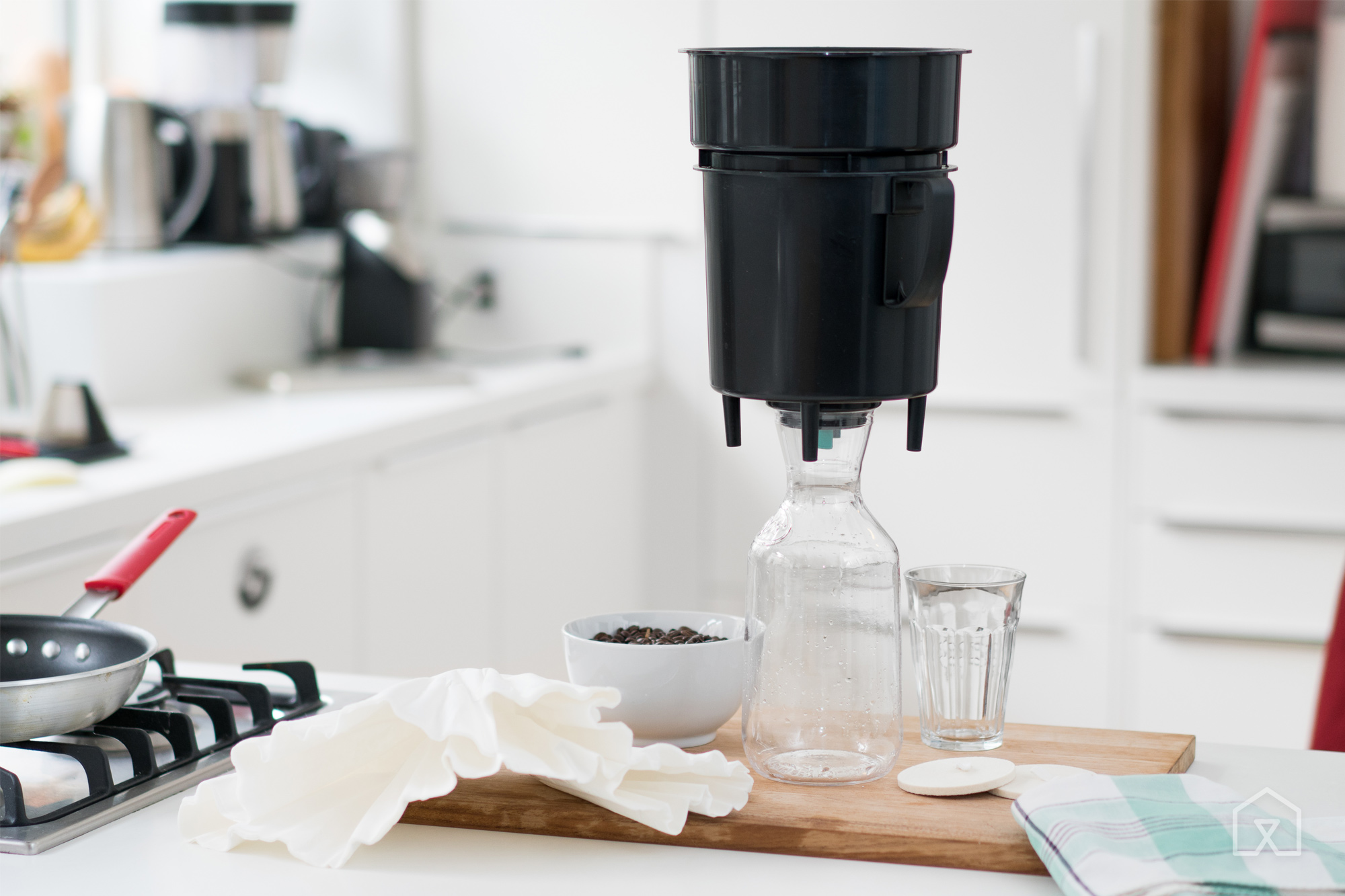 The Filtron Cold Water Coffee Concentrate Brewer is a little cumbersome looking, but it made great-tasting concentrate. Photo: Michael Hession

The Filtron Cold Water Coffee Concentrate Brewer consistently produced great-tasting coffee concentrate in all our tests, with most taste testers ranking its brew first or second. It’s not quite as easy to set up and drain as the OXO, but still simple, compared with nearly every other model we tested. The resulting concentrate costs less per cup than that of any other maker we tried (if you use the default recipe). And although the Filtron doesn’t look as stylish or pack away as neatly as our other pick, its black plastic is less likely than the white Toddy or the clear-plastic OXO to show coffee stains over time.

The Filtron produced a smooth, mellow cup of coffee every time, regardless of the beans we used. Five of the six tasters in our first-year panel gave the Filtron cup their highest rating for flavor, and three named it their favorite overall. It also received almost no dings for acidity, strength or weakness, or body. Only one barista (who generally disliked the lot) found it to have a “short, ashy aftertaste.” In our most recent tests, it was the runner-up in taste tests, making coffee tasting flatter and more typically coffee-like than the brighter, more exciting brews of the OXO.

Compared with the other methods we tested, the Filtron system is far easier to set up and empty out. (We still found the OXO easier, though). A felt filter and a rubber stopper fit into the bottom of a black plastic bucket with a handle, and an optional (but recommended) paper filter holds the grounds and water. Cleaning it means either plucking out a filter full of grounds or scooping and rinsing the bucket. After rinsing the felt filter, you store it in water in an included container in the fridge to prevent mold. That potential for molding is one of the biggest drawbacks; it’s easy to forget to store the filter properly. The Filtron’s large paper filters make its brews smoother, but are hard to find—they’re not commonly stocked at stores and are held in limited supply on Amazon.

Read more from News
← Uber’s key CEO candidate backs out at the last minute
After Math: Short and Sweet →