If you want to power or charge a small, AC-based device such as a laptop when power outlets are out of reach, you should get the ChargeTech Portable Power Outlet (27 amp-hours). It’s essentially the same thing as a USB-only battery pack, but with higher capacity and an AC outlet. The ChargeTech stood out among the small models we tested because it offered the best balance of size, capacity, and price. If you need to power more than just a laptop or some other small device but a gas generator is out of the question, we like the Goal Zero Yeti 400 Solar Generator for its higher capacity and output, as well as its top-notch build quality—even if it’s too big and too heavy to lug around all the time.

You need an AC power source if you want to charge devices that require AC power, such as laptops and camera-battery chargers, or if you want to power AC-based devices like lighting equipment, fans, or certain music gear. AC power sources can also come in handy at conferences and conventions, on road trips, for remote workers, on photography expeditions, or during technology-heavy outdoor adventures.

Our smaller pick, the ChargeTech, is better suited to an individual looking for a portable, short-term option—for example, if you need to power a laptop at a coffee shop or airport and you don’t have access to an outlet. If you’re going for longer stretches away from the grid, have a large device to power, or want to take care of multiple smaller devices, you should consider a larger pack such as the Goal Zero Yeti 400. Weighing 10 to 30 pounds, these packs are meant to be kept in a vehicle or lugged to a single spot to stay put for a while—think of car camping or tailgating, portable presentations, or professional work sites. 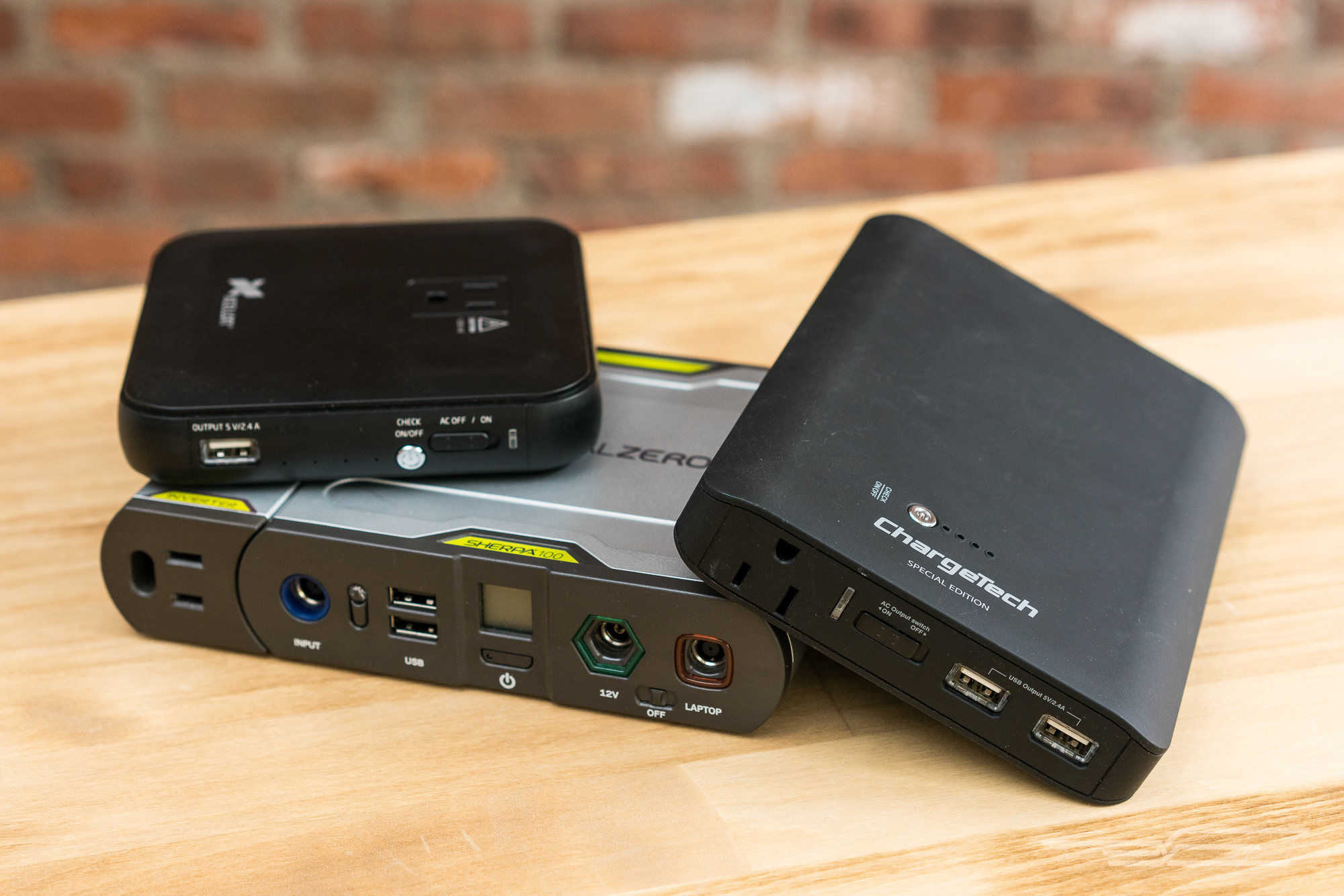 If you need an AC outlet slapped on a battery, you don’t have many choices—the 12 models we considered make up the bulk of the options when it comes to portable, affordable AC power sources. We split these models into two groups based on capacity and price. The first group of smaller batteries included eight models that were reasonably affordable and made sense for a carry-on, laptop bag, or backpack, so we focused on the most portable models—generally lithium-based units that weigh less than 5 pounds. The second group contained a handful of larger models for outdoor enthusiasts and field professionals that need more power than the smaller models can pack.

We charged each unit to full and then drained it using a 50-watt light bulb—our easily reproducible stand-in for a small laptop. We monitored the power usage and cumulative watt-hours with a simple Kill A Watt meter, and repeated the process three times. We then repeated this test using a 2012 11-inch MacBook Air to better simulate how people actually use these things in the real world.

We also considered how many watts each battery could put out at a given moment, and how smooth of an output it generated. Additionally, we paid attention to build quality and any usability quirks that came into play while using one of these batteries during an average workday.

Our pick for most people 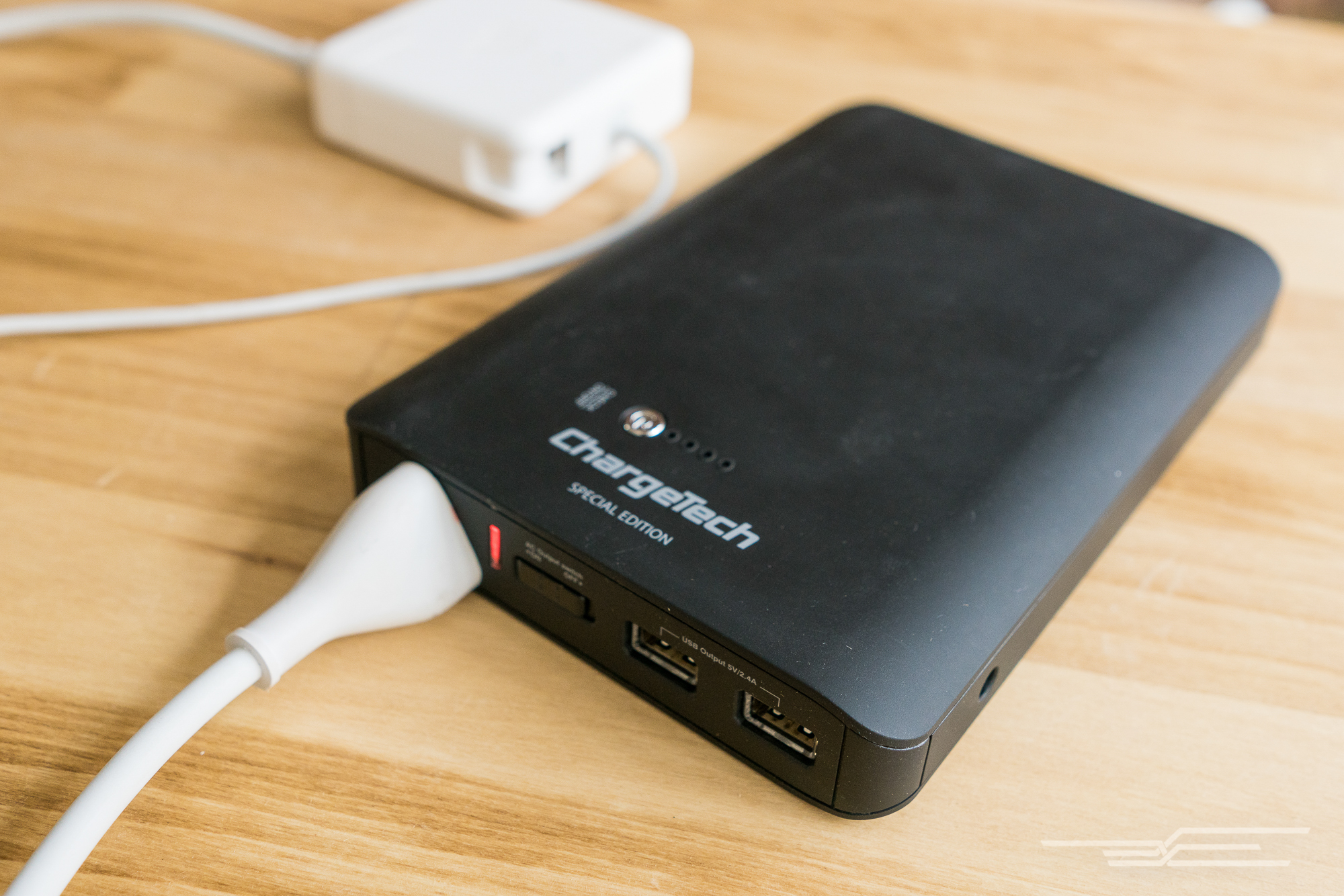 For anyone looking for a portable power source to charge a laptop or other small electronics that get power from a standard AC outlet, the ChargeTech Portable Power Outlet (27 amp-hours) offers the best combination of size and capacity, and is useful enough to justify its price. It has a roughly 97 watt-hour (Wh) capacity, and claims a maximum output of 90 watts. It should handle any laptop, battery charger, or other small electronics without a problem, and you could even run a fair-size LED TV in a pinch.

Because the ChargeTech is about the size and weight of a small hardcover book, it’s compact enough for you to carry it in your bag whenever you’re out with your laptop. The trade-off for this small size is the lack of a fan, which seems to be a catch-22 for manufacturers. Although the ChargeTech got uncomfortably hot in our tests, including a fan would have added weight and made the battery quite a bit louder. That said, it gets warm enough that we wouldn’t leave it unattended, just to be on the safe side.

One drawback of the ChargeTech is that none of the ports have reliable protection from debris: The USB ports aren’t covered at all, and though the AC outlet comes with a small cover, that piece isn’t attached in any way—unless you’re judicious about such things, just plan to lose the cover the first time out. Even some basic protections here would make the ChargeTech as competent at a campsite as it is in a café.

When you need more power 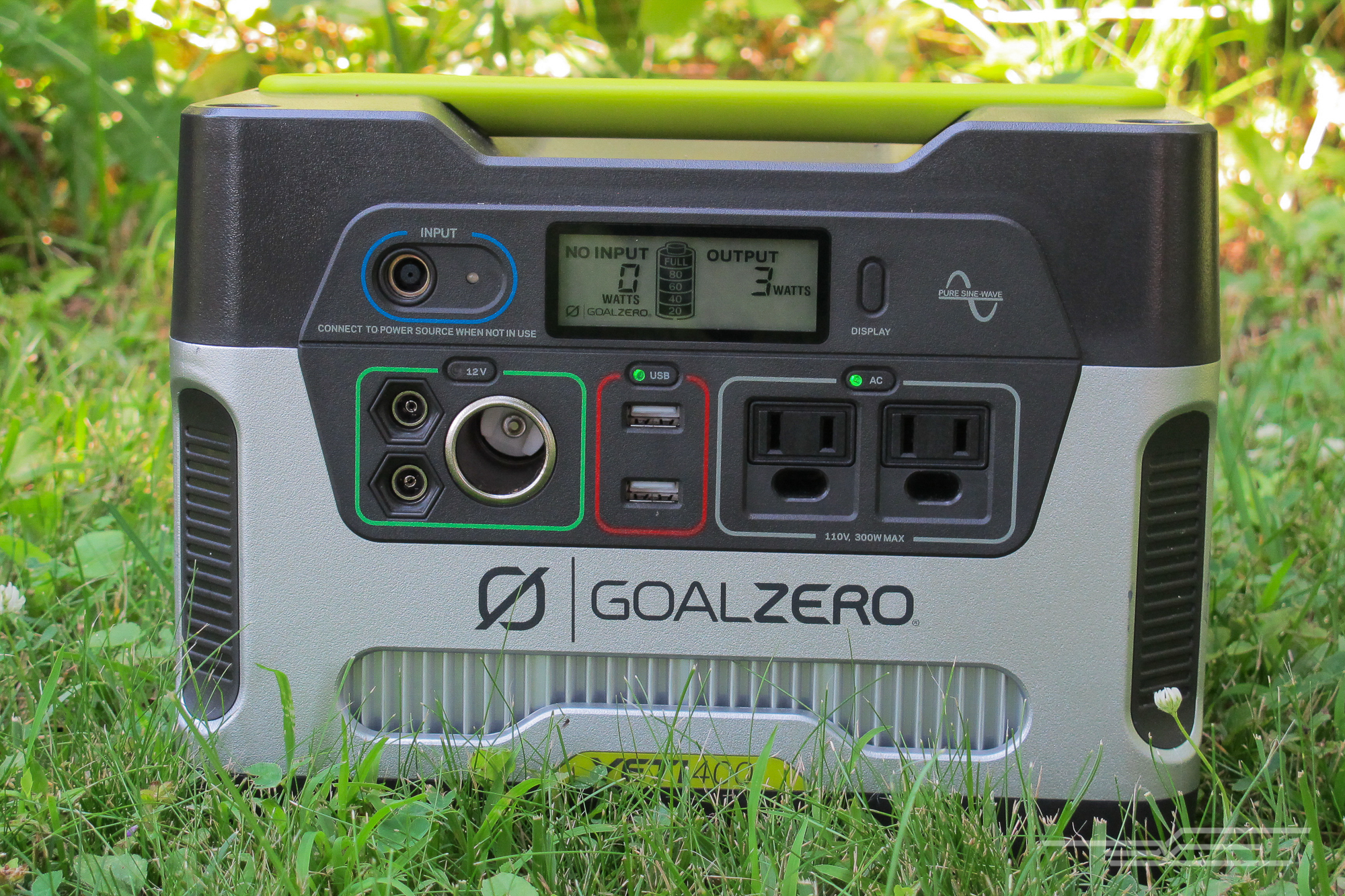 The Goal Zero Yeti 400 comes with AC, DC, and USB outlets to power or charge a wide variety of devices. Photo: Mark Smirniotis

If you’re looking for more oomph, the Goal Zero Yeti 400 Solar Generator should do the trick—as long as you don’t need to carry its 30 pounds very far, that is. In our tests, it offered four times the available power of the ChargeTech Portable Power Outlet, but it costs only about twice as much at the time of this writing. With that much power, the Yeti 400 can charge a 13-inch laptop a handful of times or keep a 75-watt television going for almost four hours. It can power up to 300 watts continuously, and offers both a second AC outlet, two USB ports, and three DC outlets. You can also charge this battery using a vehicle or solar kit, though the solar charger doesn’t seem practical unless you have no other options.

The Yeti 400’s reliance on older, lead-acid battery technology is the reason behind the model’s biggest upside—more-affordable capacity—but it’s also the reason for the product’s biggest downside, considerable weight. The Yeti 400 is a stout little box (10 by 8 by 8 inches) that easily fits in a plastic milk crate; each time we lifted it, we were surprised by just how heavy it was. (Thankfully, it has a sturdy, extendable handle on top.) The lead-acid battery inside the Yeti is user-replaceable and not prohibitively expensive—a branded replacement currently costs $100, and a comparable generic is available for less.

The Yeti also uses a higher-quality pure-sine-wave inverter than our smaller pick. This means that instead of rougher power that a small fraction of devices won’t handle well (such as audio equipment, power tools, or motors), the Yeti produces smoother power that any device can handle—power that’s just like what the utility companies send out to standard wall outlets.