By Marguerite Preston and Lesley Stockton

After researching for 95 hours, testing 16 machines, talking with pro ice cream makers and a food scientist, and churning gallons of the frozen stuff over the past four years, we think the Whynter ICM-15LS is your best bet for making consistently great ice cream at home. It’s not cheap, but because it’s so easy to use and it essentially guarantees success, it would likely get a lot more play in your kitchen than cheaper, more finicky machines.

An ice cream maker isn’t an essential kitchen tool, but if you love ice cream and like experimenting with unique flavor combinations, investing in one is worthwhile. Which type you should buy depends largely on how often you plan to use it and how much you want to spend. Generally, you’ll find three styles of ice cream makers: ice-and-salt, prefrozen bowl, and compressor. Of the three, we think most people should get a compressor because they’re the easiest to use, produce the smoothest textures, and are self-refrigerating, meaning you can make back-to-back batches. However, compressor machines tend to cost more than ice-and-salt or models with prefrozen inserts. 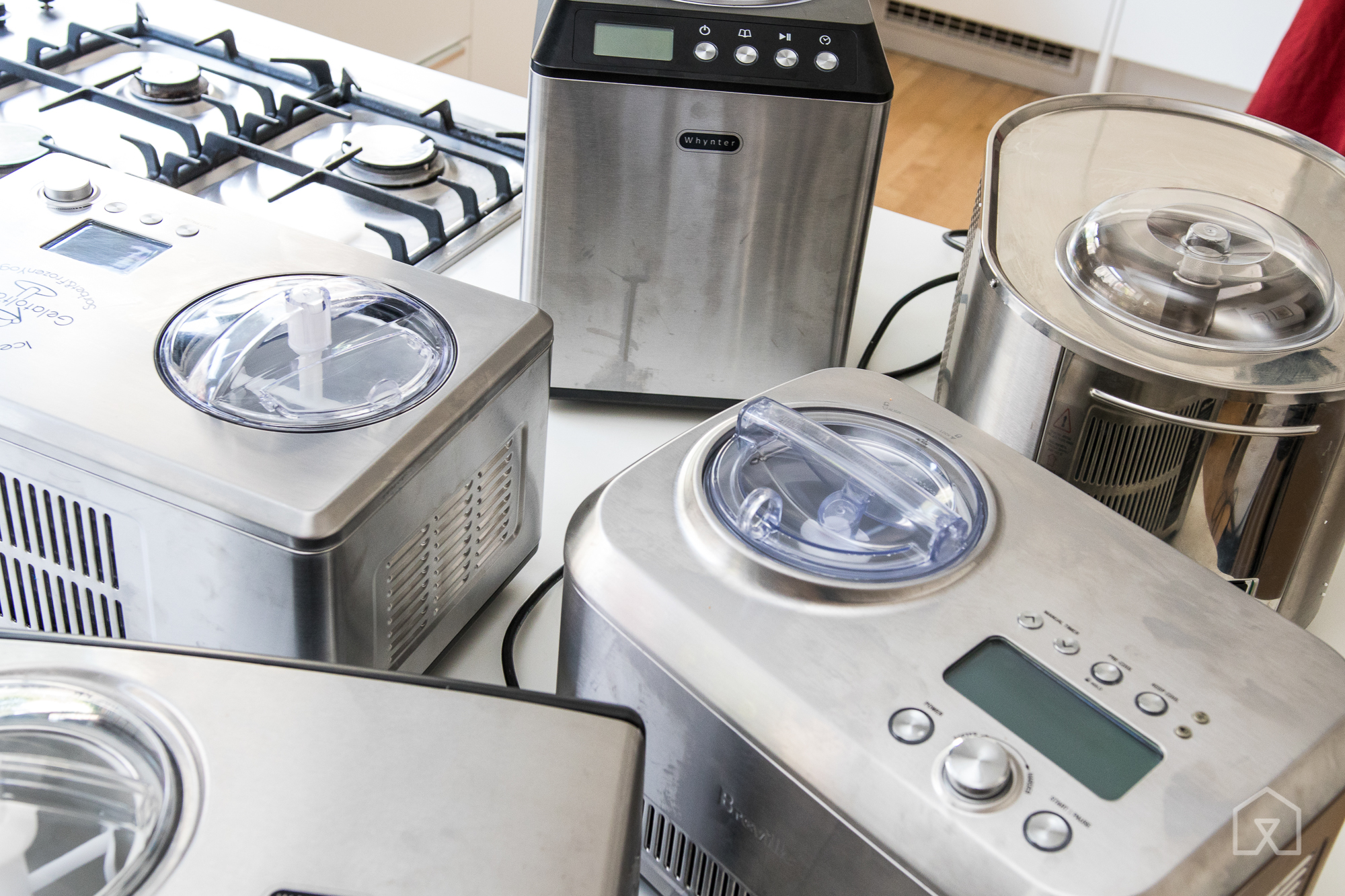 The primary task of an ice cream maker is to produce creamy ice cream with few ice crystals. The faster the mixture freezes, the less time ice crystals have to form, which is why compressor machines tend to make smoother textures: They churn and freeze the ice cream base faster than those that rely on prefrozen inserts or ice and salt.

In our original 2014 test, we made a relatively low-fat recipe from Ample Hills Creamery using nine ice cream makers of all types. But for our 2015 and 2017 updates, we considered only self-refrigerating compressor ice cream makers. These models produced the highest-quality ice cream in our first test, and in surveying our readers we found that most respondents were looking to buy a compressor machine. We also decided to use a higher-fat vanilla ice-cream base, and experimented with making lemon sorbet and chocolate ice cream. The chocolate ice cream test was particularly helpful in testing how well each machine handled mix-ins added toward the end of churning. 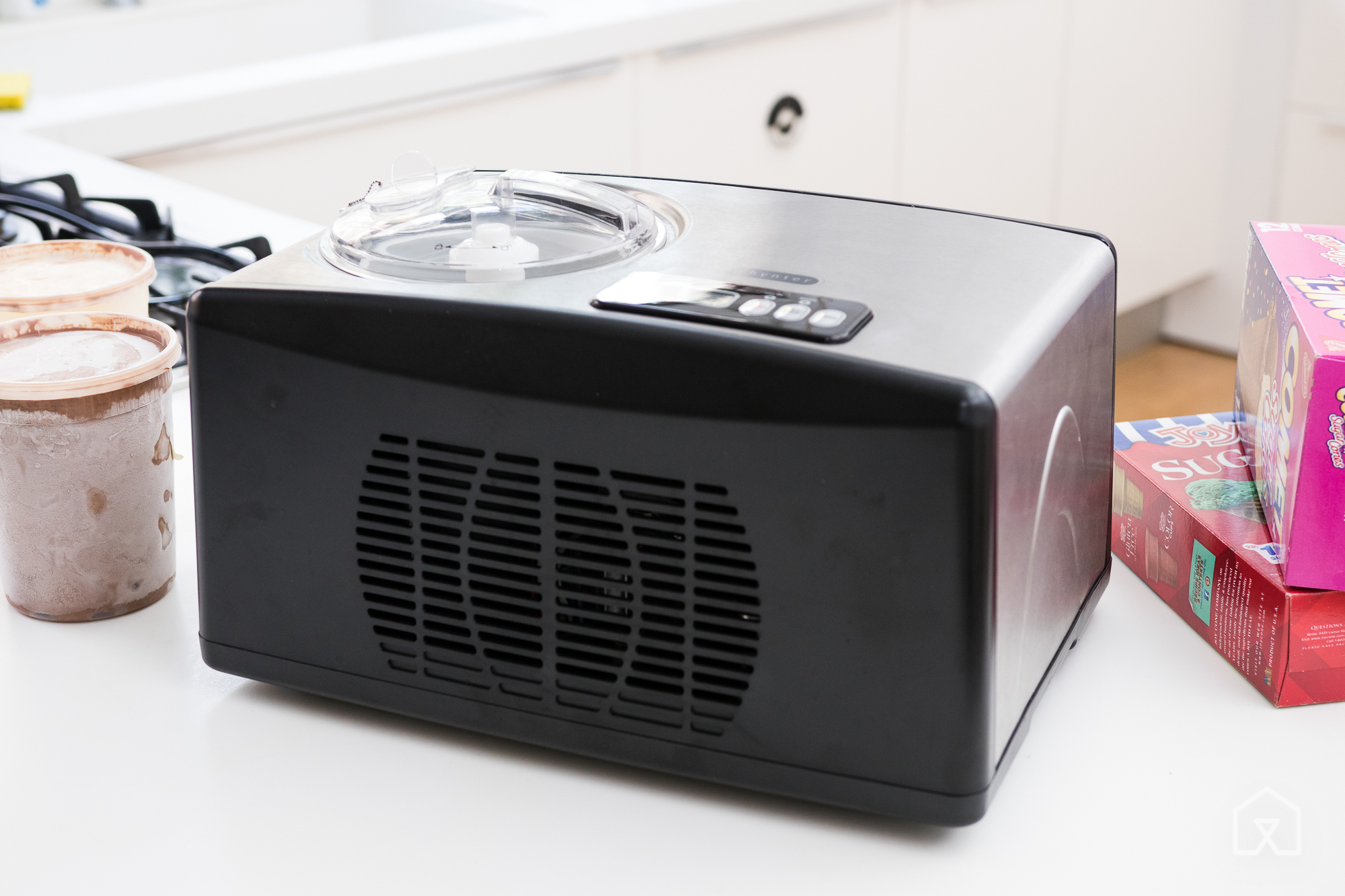 We like the Whynter ICM-15LS because it made smoother ice cream in a shorter amount of time than most of the other models. Although it didn’t create the absolute smoothest texture in our tests, it does hit the sweet spot of great results at a reasonable price. It’s also one of the quieter machines we tested, and one of the simplest models to use, scoop from, and clean. The simple, compact design makes it easy to store, as well. And because this Whynter model is a compressor machine, no prefreezing of any kind is required.

The ICM-15LS is simple to use. The 1½-quart removable bowl is easy to lift out, thanks to a built-in handle, so you can scrape out all the ice cream with ease. In our tests, setting up the Whynter machine was effortless and took less than three minutes. 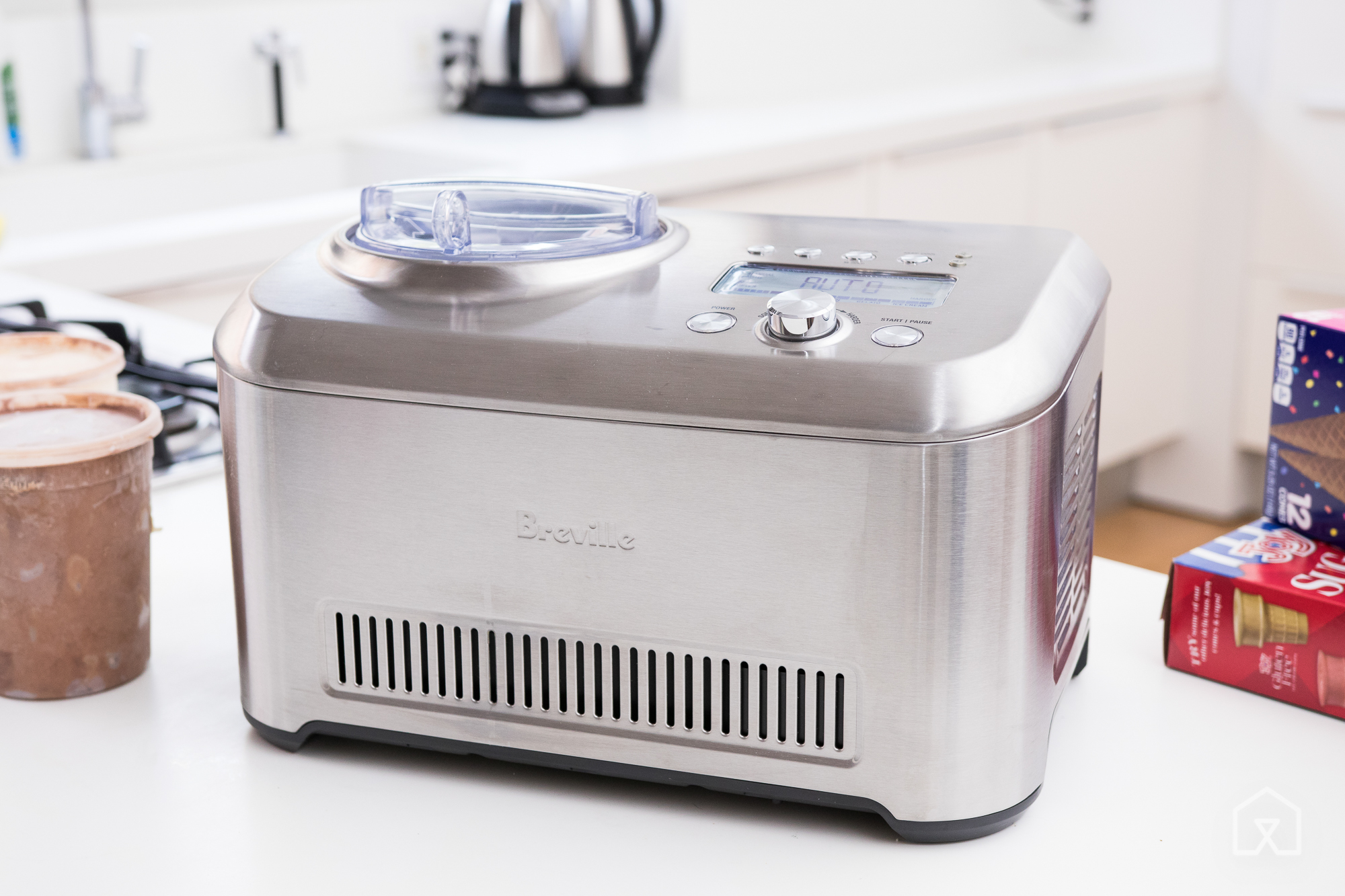 For the price, we think the Whynter ICM-15LS is the best ice cream maker for most people, but the Breville Smart Scoop is a good—albeit substantially more expensive—option if the ICM-15LS sells out. In our tests the Breville model made slightly creamier ice cream than the Whynter, but we don’t think that makes it worth the price jump.

What the Smart Scoop really has going for it are more automatic options—basically a lot of extra bells and whistles that most people probably don’t need. It has an auto mode that lets you choose from 12 hardness settings, from soft sorbet to super-firm ice cream, and alerts you when it’s time to add mix-ins or when the the cycle is done. It also has a unique cool-down function that brings the temp of your base and the machine down to the perfect turning temperature before it starts to churn. 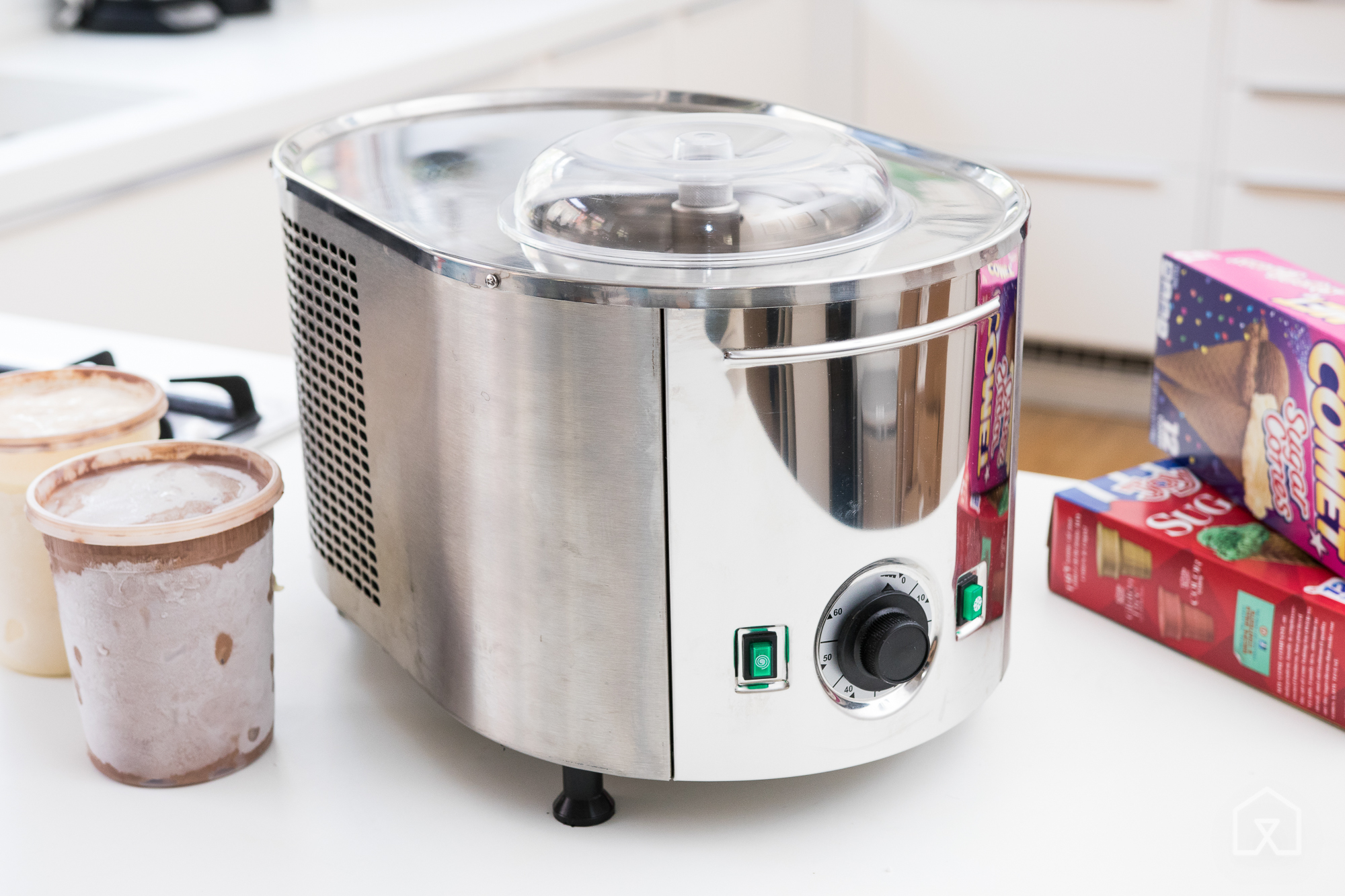 The Lello 4080 Musso Lussino is truly the most luxurious home ice cream maker we’ve ever used, and it was the favorite of nearly all our taste testers. For the price, however, it’s worth the investment only if you’re a serious connoisseur or you have cash to burn. The design of the Musso Lussino is sleek and simple with no bells and whistles, and it has just two buttons: one for freezing and the other for churning.

In our tests, this machine posted the quickest churning time of all the models we tested. What does that speed get you? Less ice-crystal formation and an intense creaminess that’s reminiscent of store-bought premium ice cream, thanks to a more powerful compressor that freezes the mixture faster. The difference is evident when you scoop out the finished product, as it’s stretchy, like gelato, and visually smoother. 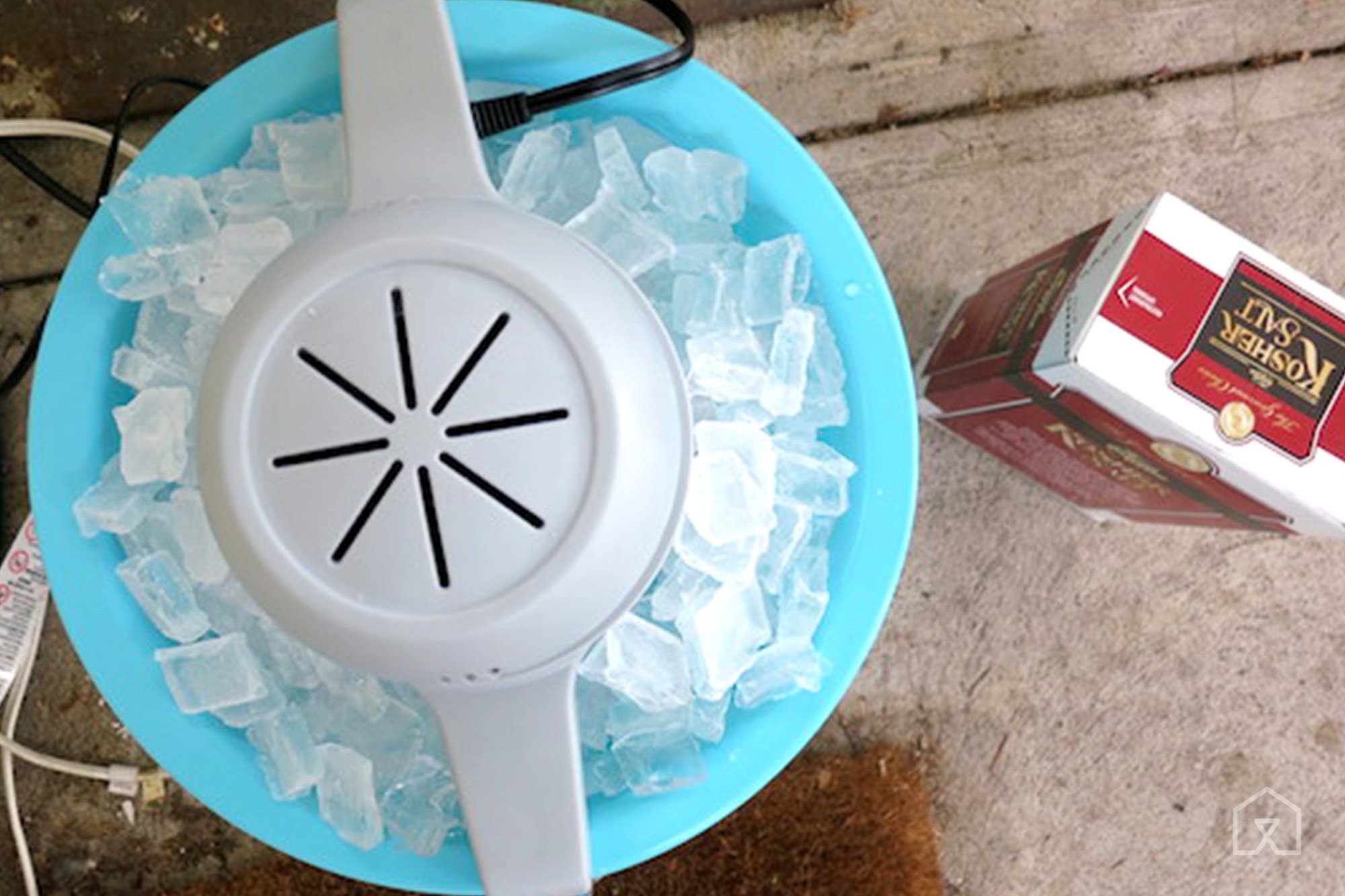 If you’re not ready to commit to an expensive compressor machine, the Nostalgia ICMP400 offers good results, although it requires more work and won’t produce the creamiest textures. Of the two models we tested that required ice and salt, the Nostalgia was the winner. This simple machine can make up to 4 quarts of ice cream, easily twice the capacity of the others. Though the final product was a bit icy, it wasn’t the biggest offender in our testing lineup, and the flavor of the cream really came out in the finish. Keep in mind that this machine isn’t designed for you to add mix-ins while it’s running. In our tests the ice cream took about 30 minutes to churn, but the bucket was only a quarter full; at full capacity, the process would’ve taken longer.

Though we were not impressed with other prefrozen inserts, we found that the KitchenAid Ice Cream Maker KICA0WH attachment was the only frozen-bowl model that worked well consistently. It made perfect, fluffy ice cream, every time, and was faster than any other ice cream maker we tested. It’s a space-saving, affordable alternative if you have a KitchenAid stand mixer from 1990 or later.