We spent more than three weeks testing 13 diffusers, and our favorite is the Urpower 300ml Aroma Essential Oil Diffuser. It has nearly three times the capacity of most other options at its price, and it has the same clean design as diffusers that cost more than five times as much. It will change the ambience of any room, with light in multiple colors, mist, and a subtle scent.

If you want your place to smell nicer, a diffuser is a solid alternative to candles. Because a diffuser can’t catch fire, you can leave it on in one room while you’re in another, or while you’re sleeping. Unlike candles or more passive scent dispensers like Glade PlugIns, you can vary the scent just by choosing a different oil. A diffuser will also make any bath feel a little fancier.

While researching this guide, I saw blog post after blog post—often on sites that had the word “wellness” in their name—about what essential oils can do for your health. But there’s little scientific evidence to back up those claims. Berkeley Wellness, a rare “wellness” site that relies on peer-reviewed research and is edited by an MD, has a good summary of what researchers do and don’t know. We can recommend diffusers here only for their ambience, not their aromatherapy capabilities. An essential oil diffuser should never, ever be a replacement for medical care. 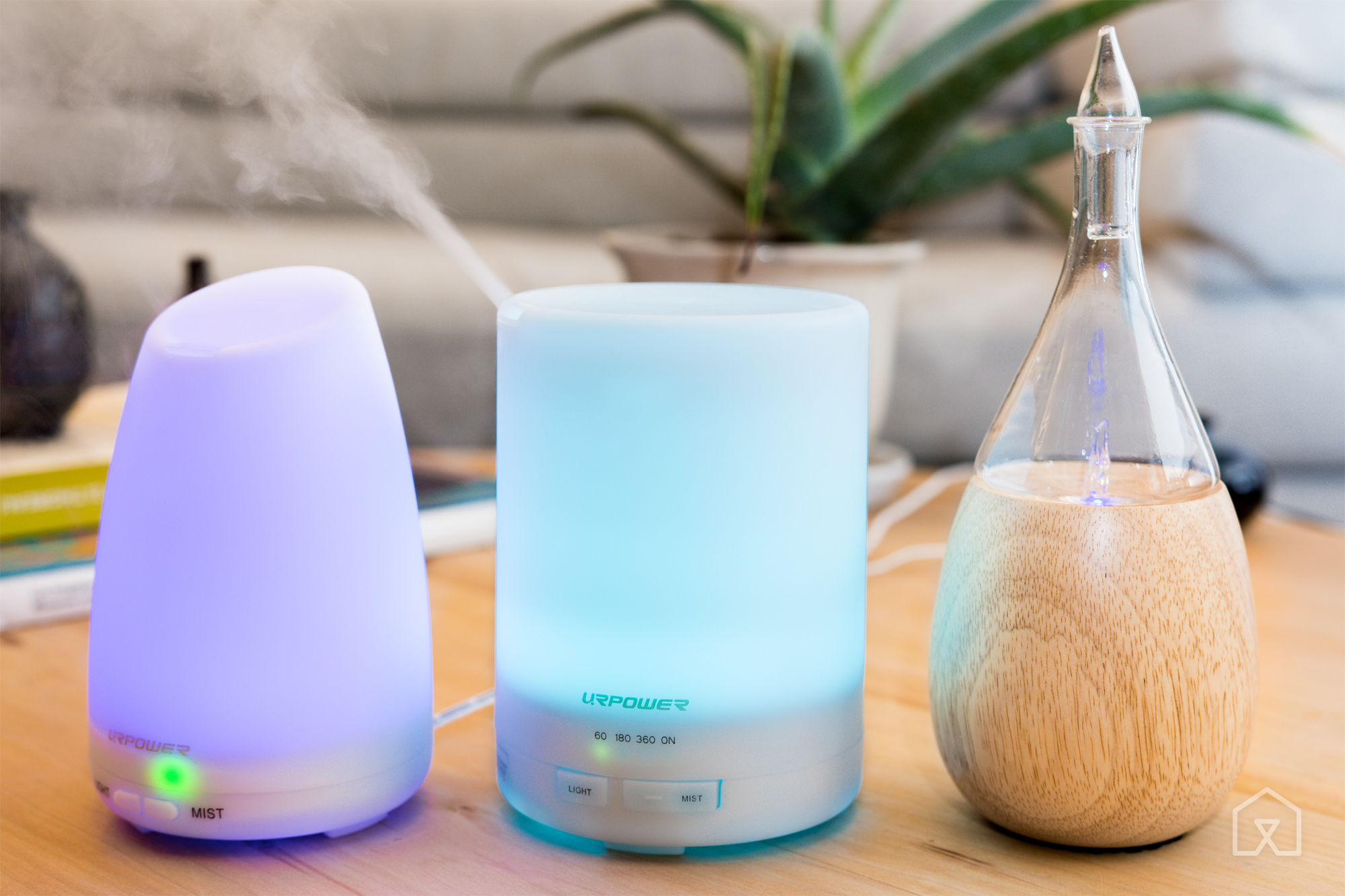 All diffusers will do the basic job of making a room smell nice. But pick one at random, and it might be too small, produce a weak stream of mist, clash with your decor, or have buttons that are confusing to operate. Before we get to those details, though, we need to note the different kinds of diffusers—ultrasonic diffusers and nebulizers.

The most popular electronic diffusers are ultrasonic diffusers. Such models have a small tank of water to which you add a few drops of essential oil, or more if you prefer a stronger smell. A vibrating diaphragm in the diffuser turns the water and oil into fine, cool mist (like boiling, but with force). Because they light up and produce a stream of mist, they are nice to look at, but the scent they produce is subtle compared with that of nebulizers or your average scented candle.

If you want a stronger smell and can spend more money, consider a nebulizer, which diffuses oil directly by blowing compressed air through it to turn it to mist. These models cost about $100, can be loud, and aren’t as interesting to look at, but they produce a more concentrated smell.

I spent three weeks using a selection of ultrasonic diffusers and nebulizers in numerous locations around my apartment. I quickly eliminated a few for having undesirable design elements, like taking up a lot of space or having buttons that I found impossible to navigate without looking at the manual. I also paid attention to the noise level from the nebulizers, which produce a buzzing sound when at full-blast. 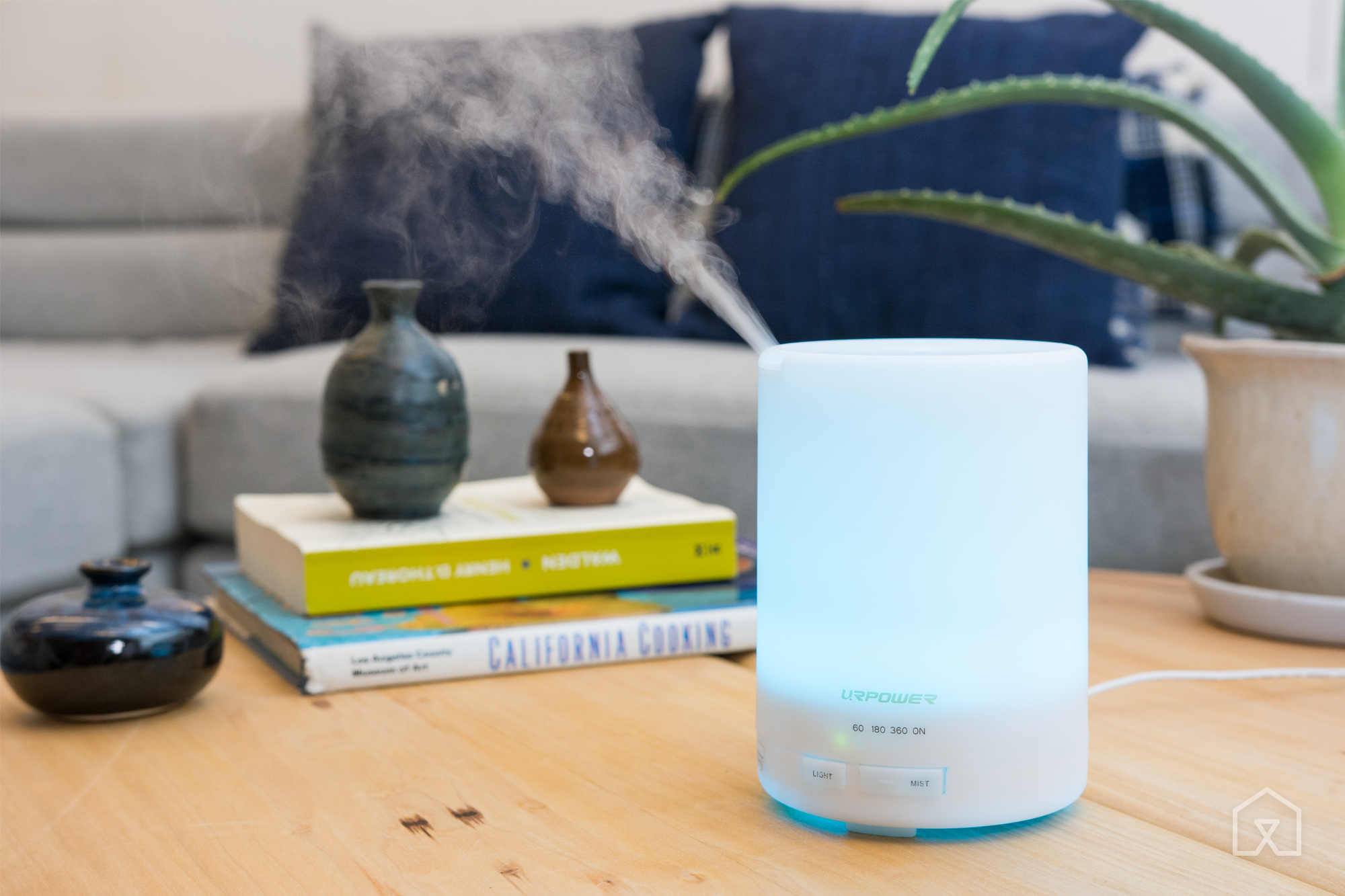 The Urpower 300ml Aroma Essential Oil Diffuser runs for longer and produces a stronger stream of mist than anything available at the same price; it can go for nearly seven hours on a single fill. It has a clean and simple design, unlike many other units we looked at. Its top snaps snugly into the base, making it easy to pick up or rotate the entire diffuser by the lid. It lights up in seven colors, has two brightness levels for each color, and its LED indicator lights aren’t too bright or annoying. It also has a convenient timer function, and it’s pretty quiet. Though you can get an equally strong diffuser with a sleeker appearance for more money, we think most people will be pleased with the Urpower 300ml.

One problem we ran into with the Urpower 300ml and nearly every other ultrasonic diffuser we looked at is that the device has just two buttons. This means you don’t get a simple on-off switch for the mist or the lights, and instead have to cycle through every setting to turn either feature off. On the Urpower 300ml, this design is particularly annoying for the light, because you have so many options.

A smaller version of our pick 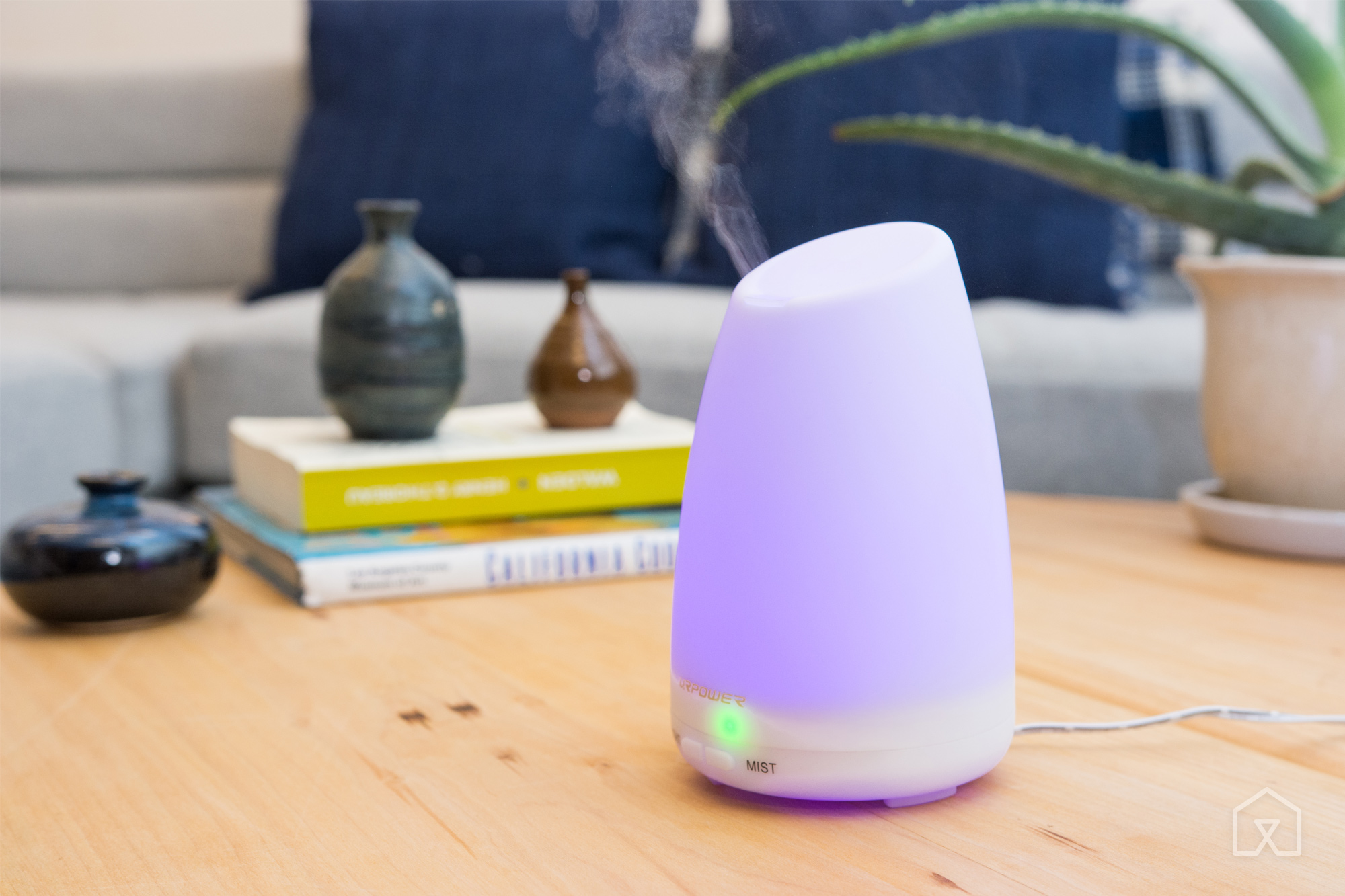 The Urpower 120ml produces a weaker stream of mist than our top pick, but we like its buttons better. Photo: Michael Hession

If our top pick is sold out, consider the Urpower Essential Oil Diffuser 120ml Aromatherapy Diffuser. The design is still simple compared with much of the competition, and it’s easy to use and clean. Like our top pick, it lights up in seven colors. Though the Urpower 120ml doesn’t run as long as our main pick, it does cost half as much as many other diffusers its size.

The Urpower 120ml runs for three hours on the continuous-mist setting or six hours on the intermittent setting (30 seconds on, 30 seconds off). Though our top pick doesn’t have an intermittent-mist feature, this model lacks a timer setting; it will always run until it’s out of water.

We like that the buttons don’t beep when you push them. But the mist button has an indicator light that’s green or red, which we found unsightly compared with the yellow-green indicator on our top pick.

The best nebulizer for a stronger scent 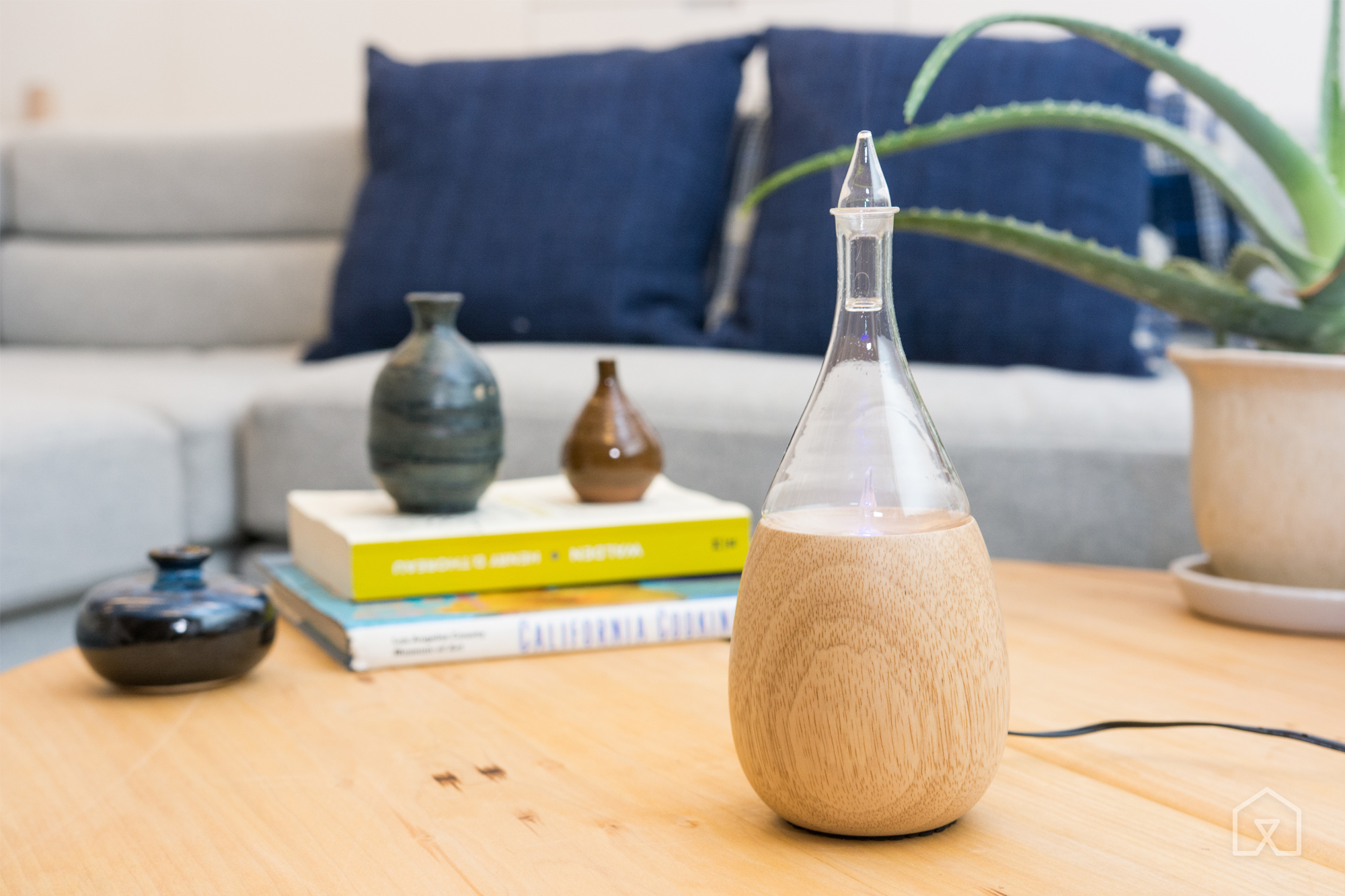 Our favorite nebulizer, the Raindrop 2.0, is the nicest-looking diffuser we considered. Photo: Michael Hession

If you are willing to spend more money and are more focused on scenting your place with essential oils without the ambience-enhancing features of a diffuser, we like the Organic Aromas Raindrop 2.0 Nebulizing Essential Oil Diffuser. Of the five nebulizers we tested (which were all great at diffusing), it’s by far our favorite for aesthetic reasons. On low settings it’s just as quiet as an ultrasonic diffuser, and it’s the prettiest diffuser we tested overall. Unlike other nebulizers, it has neither a ton of buttons to mess with nor too few options to control your experience.

The Raindrop 2.0 runs intermittently for two hours on about 20 drops of oil. It disperses oil for two minutes and then turns off for one minute. If you want the Raindrop 2.0 to run longer, you have to reset it, but two hours should be long enough to scent a room and have the fragrance last a bit.

In our tests, the touch-sensitive button to turn the light on and off was too easy to press by mistake when we turned the device on, and sometimes it took a couple of taps to turn off. This was annoying, but not a dealbreaker.

Read more from News
← HomePod Firmware Suggests iPhone 8 Will Be Able to Scan Your Face While Device is Laying Flat
After Math: Showing and Growing →