HomePod doesn’t have a display, and iOS devices lack the resolution for native 4K playback, so the discovery likely pertains to the Apple TV.

Rambo also discovered strings kCADisplayModeDolby and kCADisplayModeHDR10, suggesting that a 4K Apple TV could support both the Dolby Vision and HDR10 color formats for high-dynamic-range video.

Apple has also listed select movies as 4K and HDR in iTunes purchase history, at least in Canada and the United Kingdom. The content is still only playable in standard definition or HD, which varies from 720p to 1080p, but Apple could be preparing to offer iTunes content in 4K HDR for its new Apple TV.

Another developer Jeffrey Grossman‏ also spotted a possible reference to an Apple Watch with LTE support. The string, which refers to GizmoPreservingeSIM, lends credence to a report yesterday that claimed Apple Watch Series 3 models will feature cellular connectivity for use without a paired iPhone.

After the earlier Apple Watch LTE rumors, I took another look at the HomePod firmware and found this (Gizmo is the codename for Apple Watch) pic.twitter.com/F1sFFwv4Cr

For those unaware, in 2015, The New York Times reported the Apple Watch was codenamed Gizmo internally.

Inside Apple, members of the team that worked on the watch product, code-named Gizmo, say it was a difficult engineering challenge.

The Gift That Keeps on Giving

Last week, Apple seeded an over-the-air firmware file for the HomePod, revealing that it will run a slightly modified version of iOS. The pre-release software is said to correspond with iOS 11.0.2, and it contains references to several unreleased features that would normally be redacted before a public release. 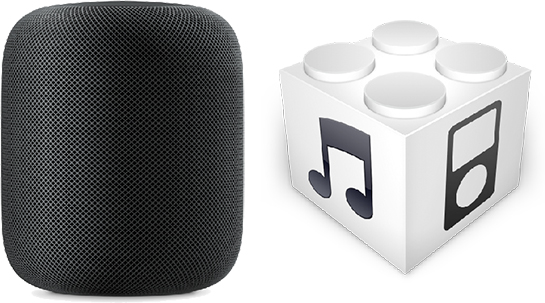 The firmware contains a payload that can be unpacked into a filesystem using a few developer tools, giving anyone skilled enough the ability to search through thousands of strings in the software using Terminal commands and disassembly apps like Hopper. For the past eight days, that’s exactly what’s happened.

Since the HomePod firmware is based on a full iOS stack, many discoveries have been made not only about the smart speaker, but also potentially about the so-called iPhone 8, Apple TV, and Apple Watch.

Thanks to the HomePod firmware, we know that that the iPhone 8’s front camera may record 4K video at 60 FPS, and that its infrared facial recognition capabilities may work with Apple Pay. The firmware also revealed a glyph of an iPhone 8 with a full-front display with a notch at the top for the earpiece and sensors.

As for the HomePod itself, it’s been discovered that the smart speaker’s multi-color LED waveform visible when interacting with Siri measures in at 272×340 pixels. HomePod also appears to have 1GB of RAM, and some of the speaker’s sound effects were found buried in the firmware.

HomePod doesn’t launch until December, so the firmware was likely released by accident, under the identifier AudioAccessory1,1.