After we spent more than 60 hours researching and testing irons (including talking with a professor at the Fashion Institute of Technology in New York City, an expert at German iron manufacturer Rowenta, and several avid quilters), we think most people will like the Maytag M400 Speed Heat Iron and Vertical Steamer. It’s the best affordable, lightweight, easy-to-use iron for anyone who needs to tackle the occasional wrinkled outfit or linen around the house. 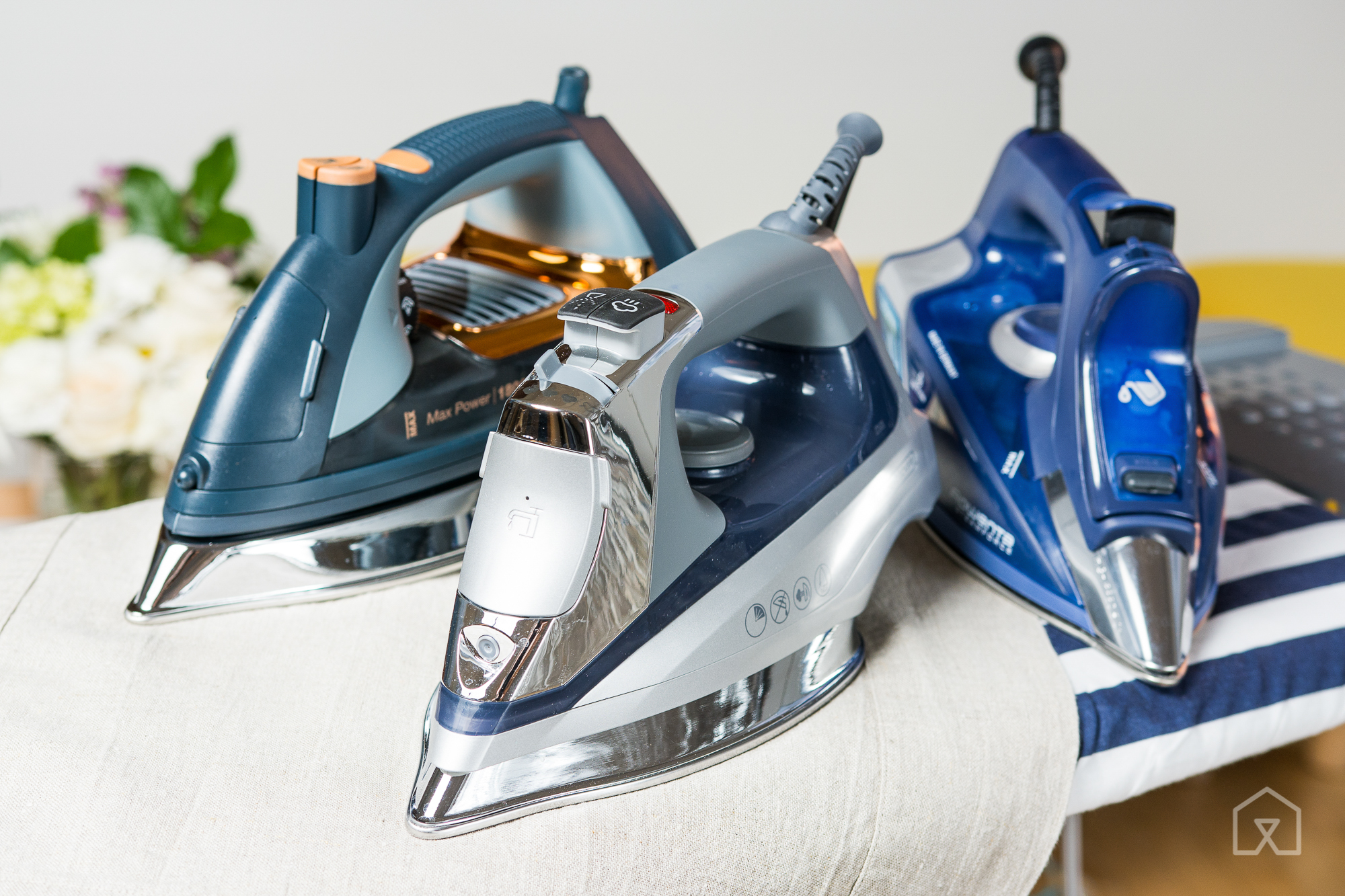 We looked for affordable irons that heat up quickly, have a reasonably large water tank, produce plenty of steam for flattening wrinkles, and don’t leak. Photo: Michael Hession

Based on nearly 400 responses to our reader survey, we took cost seriously. The majority of respondents—69 percent—wanted to spend between $30 and $75 on an iron. We also looked at smoothness of glide, size of water tank, rate of steam produced, and heat-up speed, among other useful features. Finally, we eliminated cordless models altogether, based on Consumer Reports’s testing.

We also wanted an iron that works fast. If the goal of most people is to press something quickly and move on with life, you want an iron that heats up in seconds. The irons we liked used 1,500 to 1,800 watts, which typically take about 65 to 75 seconds to reach 400 ºF.

Aside from soleplate material, wattage, steam rate, and auto shutoff, we recommend several other features common in mid-priced irons:

I set up boards and irons in my dining room and ran each iron through some basic tests: heat-up time, water tank size, and wrinkle-busting ability on a variety of fabrics. I used cotton quilt fabrics, acrylic sweaters (known to melt onto the plate of a hot iron), t-shirts, some synthetic fabrics, and a piece of silk for testing. Referring back to the feedback from our last testing with staffers in the Sweethome office, I noted how each iron felt to hold, how easy it was to use, and how much steam each seemed to release. And because durability is hard to gauge in one testing period, we’ll continue to use all of our picks to see if they maintain their great performance over time. 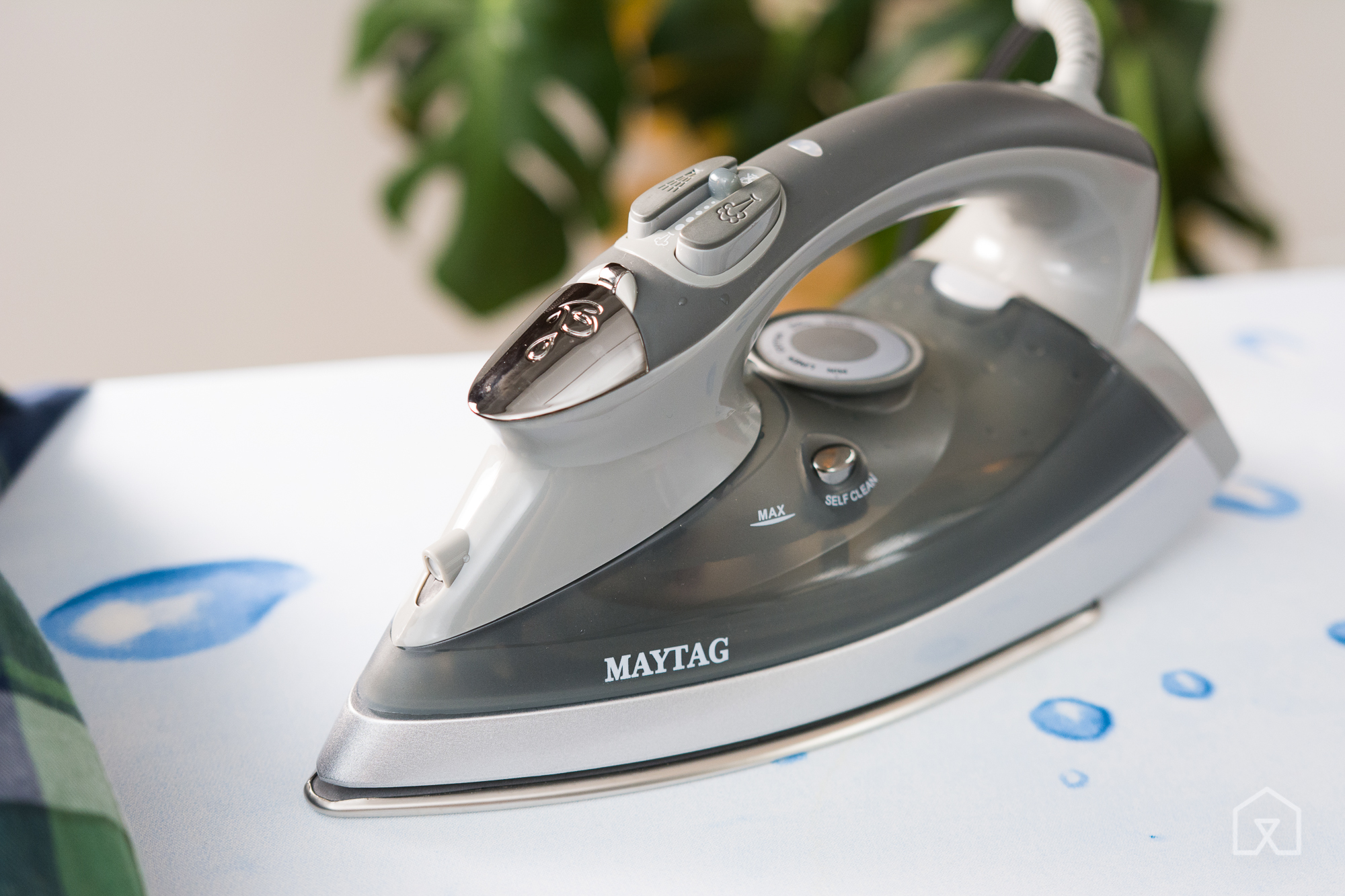 The Maytag M400 hits the best balance of a reasonable price and great performance that we’ve found. Photo: Michael Hession

The Maytag M400 Speed Heat Iron and Vertical Steamer packed the best combination of features in our testing: quick heat-up time, good steam, agility, reliability, and a great price. We also like that this iron comes with a longer-than-average two-year warranty.

Though it didn’t give off as much steam as our other picks, the M400 felt more powerful than many irons we tried with more wattage. It also heated up very quickly, producing steam on the highest setting in just 24 seconds. We also liked that the Maytag M400’s steam burst button was easier to push repeatedly than those on the other irons we tested, which helped produce a lot of steam quickly.

The Maytag was actually the lightest iron we tested overall, and it still managed to push out wrinkles with barely any pressure. It glided quickly and smoothly over every fabric we tested. But if you’re ironing something big and heavy, or something with stubborn creases (like linen), the Maytag may be too light.

We do wish the Maytag had a cord longer than 8 feet. Sometimes extra length helps you maneuver the iron around an ironing board. But this limitation is minor, and overall we stand by the Maytag as our pick. 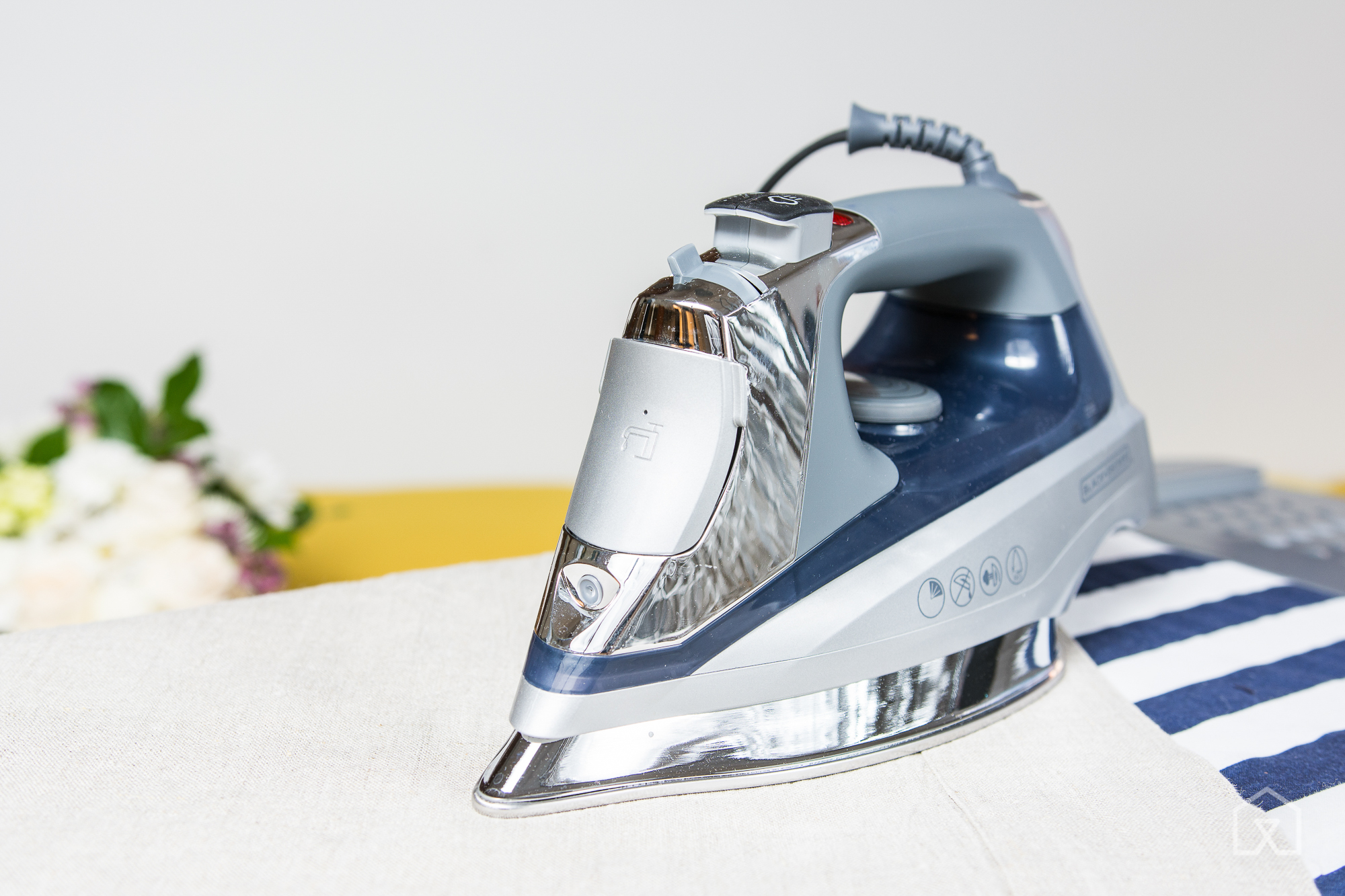 The Black+Decker D3030 Allure has a smooth glide, tons of steam, and a user-friendly design. But it also seems to have a track record of reliability issues. Photo: Michael Hession

If the Maytag M400 is sold out or unavailable, we would recommend getting the Black+Decker D3030 Allure instead. The Allure is one of the lightest irons we tested, weighing 3.1 pounds, and was one of the fastest irons to produce hot steam in our testing. It also has one of the most comfortable handles we’ve tried. Its stainless steel soleplate glides more smoothly across fabrics than most of the competitors in the same price range.

But there’s a big reason we had to demote this iron from the top spot: We are worried it may have longevity problems. The heating element on the Allure we were long-term testing failed after about a year (we were using the iron twice a week), and at least 23 Amazon reviews for this model note the same problem. But with its two-year warranty, it was pretty easy to get a replacement.

Having an iron fail in less than a year was really disappointing, but we can’t deny what a strong competitor the Allure is—especially because it’s only about $38. Even with this big reliability issue, we would still recommend the Allure as an affordable backup option.

A high-quality iron for frequent use 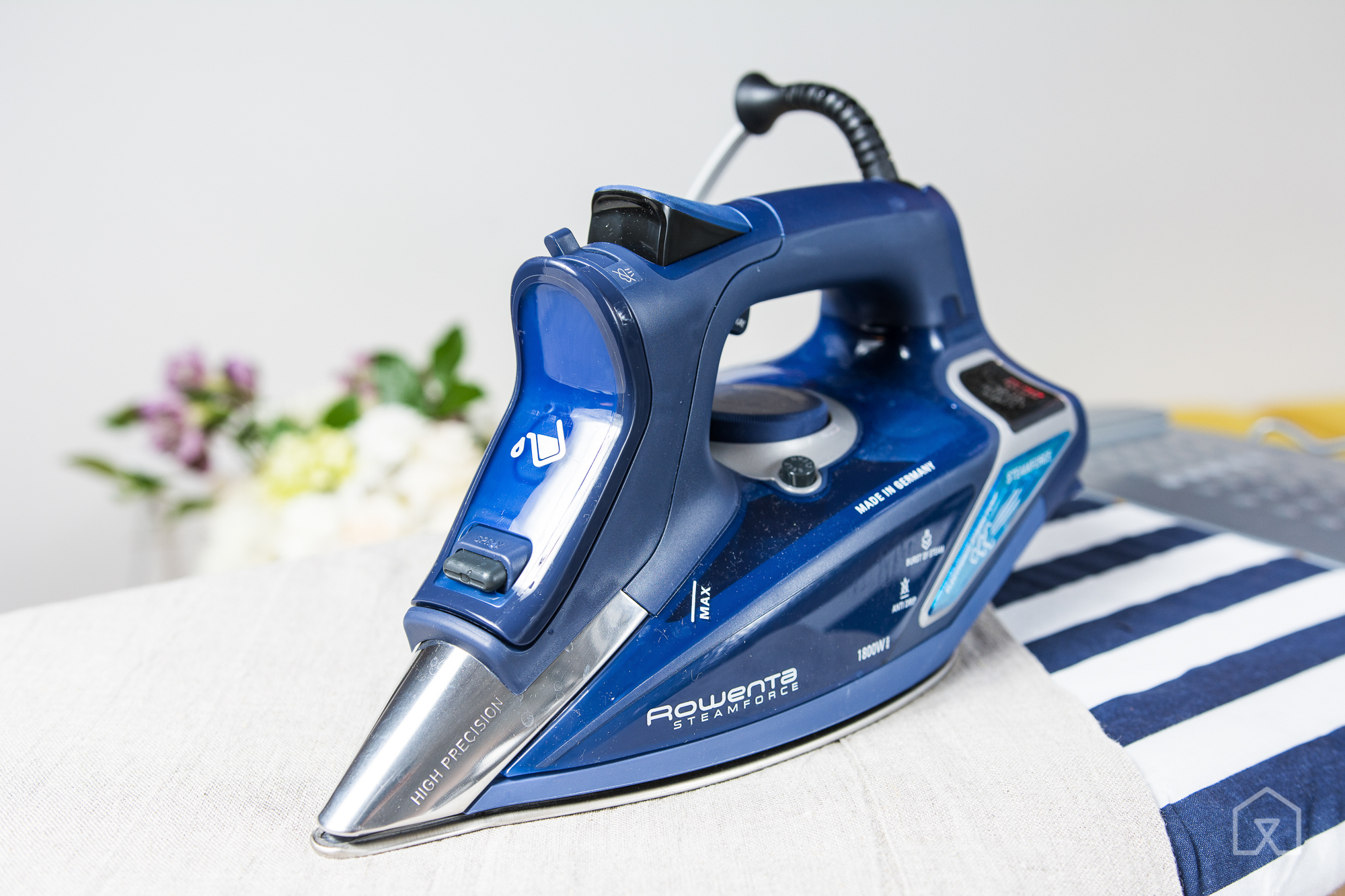 The Rowenta DW 9280 SteamForce, our upgrade pick, shoots out more steam than any other. Photo: Michael Hession

If an iron can be dreamy, the Rowenta SteamForce is dreamy. This German-made iron performed best in our tests. At 3.9 pounds, it’s too heavy to be the most comfortable to hold, and not all of our testers loved the layout of the buttons and dials. But none of us could argue with the way it beat every wrinkle we threw at it. The stainless steel soleplate has more holes than any of our other test picks, and the tip has Rowenta’s Precision Shot, a group of holes that emits a concentrated blast of steam for tougher creases. The SteamForce also has an extra-large tank, so you need fewer refills for big jobs.

However, the SteamForce has drawbacks. The cord is only 7 feet long, which felt a little puny. It has a one-year warranty in the United States, which is less generous than the two-year warranties offered by Black+Decker and Maytag.

The biggest problem is that this one often costs more than twice as much as the Maytag M400. We think the SteamForce’s price is worth it if you’re a sewer or quilter or regularly tackle mountains of ironing. But go to a store first and make sure the weight isn’t a problem.

Read more from News
← Tumblr apologizes for filtering out LGBTQ+ content
After Math: Binge On →