We flew to Taipei to see how HTC made the U11

HTC just turned 20 years old and the company celebrated its birthday with the U11, it’s latest, and shiniest phone ever.

From humble beginnings with Windows Mobile, HTC built a reputation as an innovator and then seized the opportunity to truly evolve from white label manufacturer to global brand as an Android pioneer.

By 2011, the company was riding high, and closing in on market leaders Samsung and Apple, combining quality and innovation with a cool, underdog image. Things have taken a downward spiral since then. It has been a few years now since HTC released a hit smartphone, and it has been even longer since the Taiwanese company’s smartphone division turned a profit. Still, HTC is determined to prove that it’s still a force to be reckoned with on the smartphone scene. We flew around the world to find out what it has planned.

We’re here for the launch of HTC’s latest flagship smartphone: the U11. It’s a successor to the HTC 10, but it’s a part of the company’s new U series. Earlier this year, HTC launched the U Ultra, the first entry in the new series, to mixed reviews. Following in LG’s and Samsung’s footsteps, HTC is giving us a behind-the-scenes look at its headquarters, design laboratory, and a factory where its smartphones are made. This is the first time these doors have opened for the press.

On the factory floor

Our tour begins in Taoyuan City at HTC’s factory. It’s an unassuming building that looks an office block. A sea of mopeds stretches as far as the eye can see in the large parking lot out front. There’s no billboard, or even a big shiny sign to mark out the birthplace of HTC’s smartphones — just a subtle logo on the main doors to the factory. We’re stripped of cameras in the big, airy lobby, before ascending to the production line. After donning a white coat, some shoe covers, and a fetching hairnet, it’s time to hit the factory floor.

Anything less than perfection is rejected.

We’re guided in small groups by a taciturn foreman who points out each stage in the journey of an HTC U11, from simple metal frame to shiny, packaged smartphone. The assembly line starts with stacks of components and chips, which are organized into trays. A series of protective glass cases houses robot arms busily slotting components into place and drilling or soldering them together. Every so often, there’s an inspection station with an HTC employee sitting behind a huge magnifying glass. Diagrams and charts indicate what each set of components should look like — anything less than perfection is rejected. It’s a noisy, robotic environment, but the automated precision is mesmeric.

The next step involves 12 human workers sitting before a conveyor belt, diligently fitting more components into what is starting to vaguely resemble a smartphone. Each worker has a few seconds to complete the unit in front of them before it passes along to the next. It doesn’t look like a very fun job, but someone has to do it. There’s no time to chat, or even glance at the press invasion, as we shuffle along. At the end of this section, the HTC U11 is nearly complete — it’s only missing its liquid glass back. 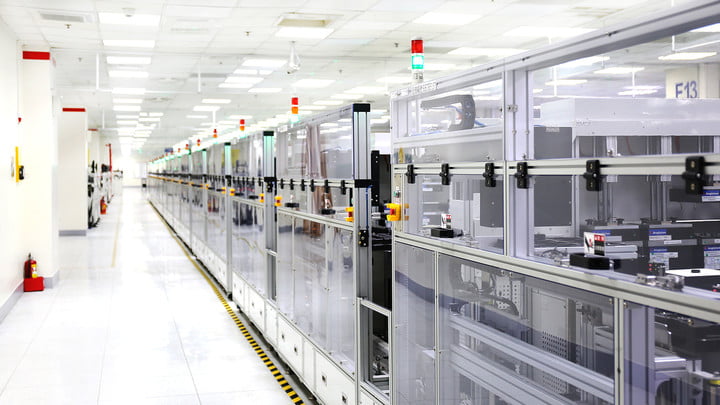 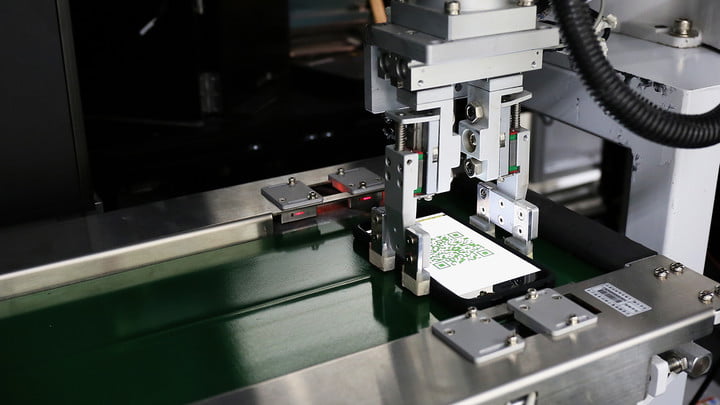 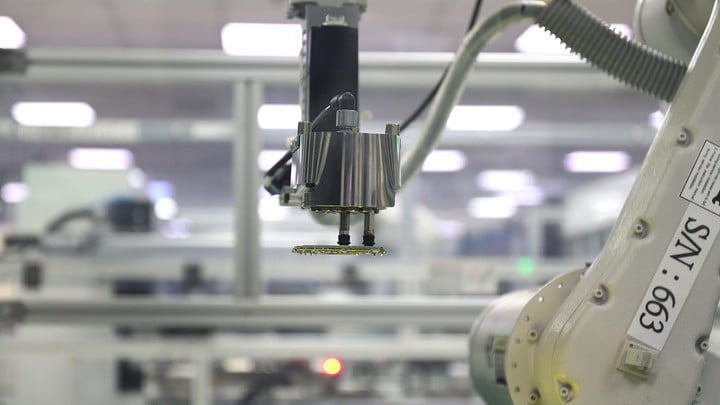 Another army of robot arms put the new phones through their paces. The displays show a QR code, which is scanned, before the screens are calibrated and other functions like the Optical Image Stabilization are tested out. All the phones are connected to a central server via Wi-Fi and Bluetooth during this stage, so they can send diagnostic data back from each test and any problems can be quickly flagged. They appear to be running stock Android. It’s hard to see how defects can slip through a stringent system like this, but smartphones are complex beasts, and problems with early production runs are all too common across the industry.

The handsets are then plugged in, so the appropriate software (and carrier bloatware) can be installed for each market. Packaging is next, as workers wearing microfiber gloves apply the appropriate logos to the incredibly shiny liquid glass backs and polish them to a sheen. The workers apply a protective sheet of plastic to the display — the one that’s so fun to peel off — and then accessories join the finished handset in a curved white box that bears the HTC U11 legend. 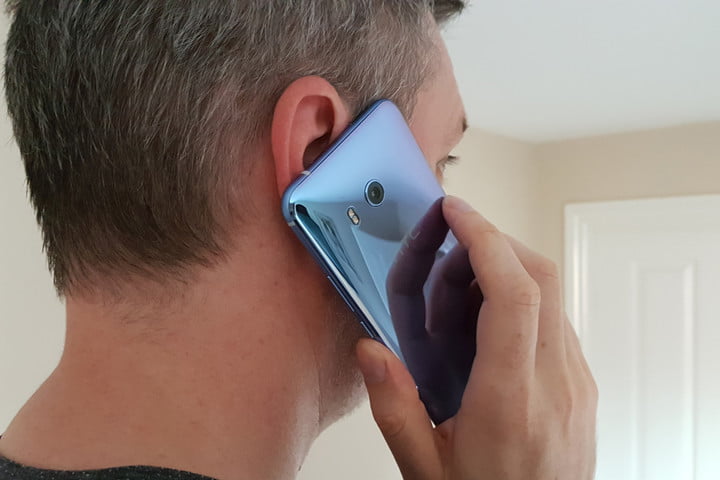 Palettes of brand new U11’s are rolled away, but a random sampling of 15 percent are set aside to be tested. Rows and rows of newly boxed phones are piled up outside the test lab, which is tucked away in a side room at the end of the line. A grinning supervisor proudly explains the testing procedure. Workers unbox the new phones and put them through a variety of tests, connecting to Wi-Fi, testing apps, charging them up, and then factory resetting the phones that pass. Each one is then carefully polished, and repackaged for shipping. We ask how many fail and the supervisor laughs, shakes his head, and, after a pregnant pause, says less than 0.01 percent.

The next part of the tour involves grabbing a bus to HTC’s gleaming headquarters. It takes around an hour to get there, passing out of Taoyuan through a valley flanked by imposing, lush green, mountains, and into the vibrant metropolis of New Taipei.

The shining, white building is in the Xindian district nearer to old Taipei city. You can see it from quite a distance, and this time the familiar, green HTC logo is proudly displayed at the top. 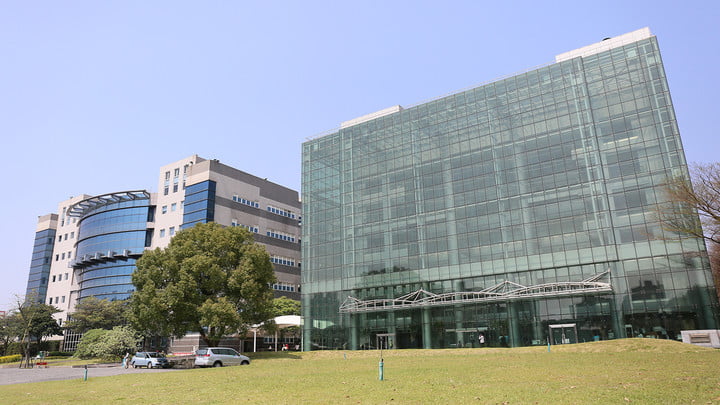 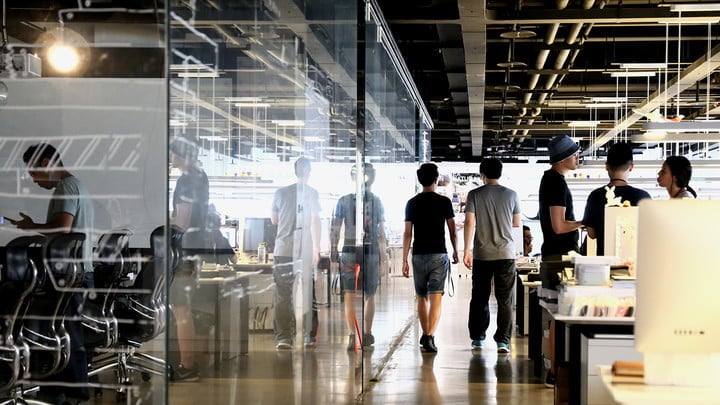 The lobby is vast and clad in white marble, with an open space above that spans seven stories, with internal walkways criss-crossed in either direction and the company canteen at the top. There’s deliberately no air conditioning in the lobby of this eco-friendly building, but the marble and the space combine to reduce the 104-degree Fahrenheit heat from outside to a comfortable level.

We take a glass elevator up to the 16th floor, where HTC’s main design department is situated. It’s a funky, open space with glass everywhere, and a lot of shiny, white furniture. Casually dressed youngsters mill around. HTC relies mainly on this facility to come up with new phones, but there’s also a San Francisco design department to ensure a mix of cultural sensibilities.

We can only wonder what potential smash hits or disastrous flops lie forgotten in these drawers.

Beneath the phones laid out for our inspection, there’s an intriguing bank of mysterious drawers. They contain previous prototypes, and abandoned research directions. HTC’s design head opens one up to show us a prototype of a gaming smartphone with a D-pad at one end and a screen that slides up to reveal buttons. It was a concept for hardcore gamers that never got past the mock-up phase, which is probably for the best.

Everyone is keen to explore, but we’re not allowed to look in any other drawers. Instead, we learn how the U11 was developed and get a look at the finished handset next to 15 alternative prototypes with slight differences, like bigger camera modules, alternate button placements, or highlights in the frame. One of the designers tells me it’s a very small sample of all the prototypes they went through before arriving at the final design. When asked for a number, he just exhales loudly and rolls his eyes.

It’s clearly a stringent, pain-staking process to narrow down the winning design. Everything from the original Desire to the Evo 4G LTE to the HTC 10 passed through here, but then again, so did the Rhyme and Evo 3D. We can only wonder what potential smash hits or disastrous flops lie forgotten in these drawers.

The final space is an unremarkable office block where HTC rents a few floors. After passing through a lobby where some men have set up a folding table to sell children’s toys, we take the elevator to a cubicle-filled office to find the sound department, where we are handed the tiny metal speaker that you’ll find inside each U11. A sound engineer admits that each department has to negotiate over the amount of space they have to work with. A bigger speaker might mean a smaller battery, so things can get heated.

The sound department is pleased with the speaker space it secured in the U11. At the launch event the next day, HTC has demo areas set up to show off the quality and volume of the BoomSound speakers and the active noise-cancelling capabilities of the USonic earphones that ship in the box.

Back at the R&D department, we are ushered into an echo-less, sound-proofed chamber. You can feel the sound disappear the moment it comes from your mouth. Thick corrugations remove every hint of echo and even extend into the floor beneath a metal grate. It’s an eerie vault and contains a single, talking mannequin with a realistic model of a human ear. She introduces herself to us and explains that the phone’s speaker is tested here, held to the mouth in a few typical user positions, to ensure call quality is high. 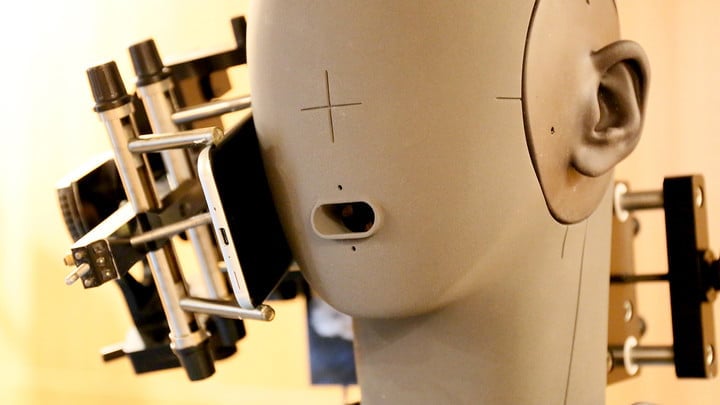 The next chamber is angled, with another mannequin in the middle. This one is male, and our guide jokes that he’s dating the girl next door. There’s a surround sound system in here that plays traffic noises, background conversations, the clank and clatter of plates in a restaurant amongst other sounds, to test the noise cancellation technology in the U11.

Our tour ends in a completely black room, where a serious group of camera designers test various aspects of the U11’s camera technology. They have a DxO Mark light box, and some other machines to test things like white balance. While our eyes can see white as white, even when bathed in different color temperatures, but a camera sensor can’t. It has to be programmed and adjusted. The U11 has a Sony camera sensor in an LG module, but HTC’s designers hone the performance to their liking, aiming for a realistic color representation. The hard work obviously paid off, because we later learn that DxO Mark scored the U11 camera at 90 — the highest score a smartphone camera has received so far.

So ends our tour of the U11’s design and construction process. It’s been an enlightening peek behind the curtain of an innovative company that rarely explains itself. We’re left with the feeling that the U11 has real potential, but HTC will have to convince the public as well as the press. After all, last year’s rave reviews for the HTC 10 didn’t translate into stellar sales. As a bus pulls up outside, the sky opens with an impressive downpour, and HTC staff are lined up to hand us umbrellas. It seems fitting. It’s been a stormy few years for the company, but perhaps the impossibly shiny U11 can break through the clouds and offer a glimmer of sunshine for HTC’s fortunes.