Customers looking for an affordable solution to expand wireless AC coverage in a home or office just got two more options.

Netgear released its first Orbi networking kit in August. The company argues that Orbi is not part of the mesh-based networking market because it provides Wireless AC connectivity differently than the hockey puck-styled rivals, despite Orbi being a multi-unit setup. Now the company is expanding the Orbi brand into an entire family of networking products so customers have more choices regarding connectivity speeds and price.

Beginning Tuesday, Netgear sells three Orbi-branded wireless AC systems: The new RBK30 setup, the new RBK40 setup, and the current RBK50 kit. All three solutions are Tri-Band devices, meaning Netgear threw in an additional 5GHz band although it’s never directly accessed by the user. Instead, that lane is reserved for sending data between the Orbi units, making Orbi different than the typical mesh-based system that only has one 2.4GHz band and one 5GHz band.

Here is the updated Orbi family:

Notice that the dedicated 5GHz band consists of two antennas in the RBK30 units, and four antennas in the RBK40 and RBK50 units. Thus, all data originating from the ISP’s modem travels across this private two-lane or four-lane access road connecting the Orbi units together. Data is then transferred to and from wireless devices through the generally accessed 5GHz and 2.4GHz bands (or Ethernet for wired).

In theory, this tri-band design speeds up connectivity because the Orbi units aren’t relying on a single 5GHz band for Orbi-to-Orbi communication and Orbi-to-client-device communication. That is supposedly the problem with standard mesh networking kits because the more client devices users add to the network, the slower the overall connection to the ISP’s modem becomes.

Here is a diagram found in an older Netgear press deck that draws the comparison of Orbi versus Luma/Eero-type hockey puck networking kits: 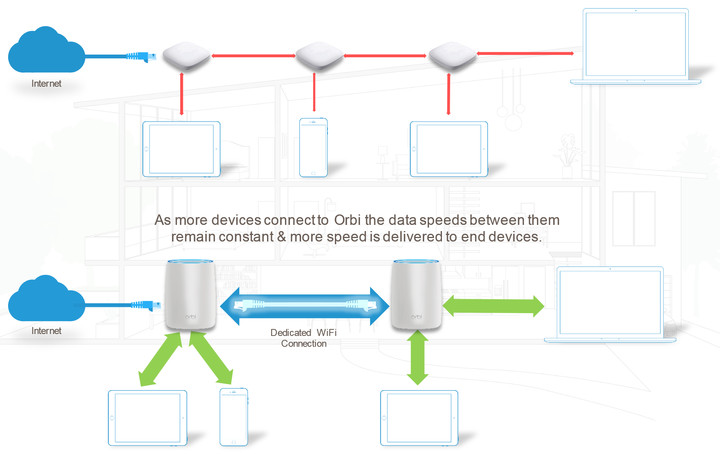 Orbi is also highly different than mesh-based systems in that the hub unit is an actual router. Users can dive into the browser-based interface to configure a plethora of network settings. By contrast, the Luma and Eero kits depend on Android/iOS apps with highly shallow customization capabilities. To that extent, Orbi is ideal for gamers, Ultra HD content streamers, and customers wanting complete control over every aspect of their network. The Luma and Eero kits are seemingly made for plug-and-play customers.

Ultimately, Netgear made a smart move by adding more affordable options to the Orbi brand. Customers now have a $300 starting point to take advantage of Netgear’s unique tri-band networking design.

Read more from News
← Why is the Pixel’s camera so good? Google explains it, and what’s next
Netgear extends the Orbi brand to include two new Wireless AC networking kits →