Phone scams are as old as time — and they aren’t going anywhere soon — which is why T-Mobile’s new features could prove valuable.

T-Mobile has announced it is rolling out a pair of features today for its post-paid subscribers intended to help eliminate nefarious calls. Named Scam ID and Scam Block, they work in different ways to safeguard users, relying on the carrier’s patent-pending call analysis technology and a constantly updating database of known frauds.

Scam ID is the one T-Mobile customers will probably become most familiar with, as it alerts customers to suspicious incoming calls before they pick up the phone. When a user receives a call flagged by Scam ID, it will be identified as “Scam Likely” in place of the caller ID.

More: How to block calls on an Android phone or iPhone 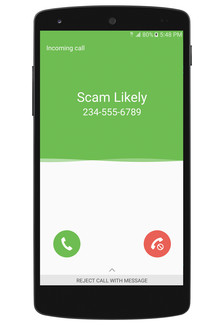 T-Mobile says new customers of its One plan can expect to receive the feature on April 5, while existing post-paid customers can enable it for themselves on the same day by dialing #664#. Otherwise, T-Mobile will eventually enable Scam ID for all users.

Still, the carrier would ideally like to prevent scams from getting to you in the first place, which is what Scam Block is for. Scam Block works discreetly within the network, preventing those calls from ever reaching you. Unlike Scam ID, Scam Block has to be manually activated, and customers can do just that by dialing #662#. To turn it off, the number is #632#.

T-Mobile says with these features, every incoming call to the network is checked in mere milliseconds against a global list of malicious numbers. “Behavioral heuristics and intelligent scam-pattern detection” are active behind the scenes to keep that database forever current as new frauds pop up.

Last July, Google added a feature to the Phone app for Nexus and Android One devices that worked similarly to Spam ID, flagging certain incoming calls with a “suspected spam caller” alert. The update also allowed users to report spam calls that had been received and block those numbers on the spot.

Read more from News
← Dell’s XPS 15 vs. Apple’s MacBook Pro 15: Which premium laptop is the best on the market?
The SlimBuds are the first wireless earbuds meant for motorcycle riders →