Buying a gaming mouse is a bit harder than it used to be. Do you go for a simple four button pro model with lightning-fast response times and super-high DPI sensors, or do you go for a more specialized MMO model with dozens of buttons? It’s a difficult choice, but don’t lose hope. You have more options than you think.

The Steelseries Rival 500 is a pro-grade mouse with MMO and MOBA-inspired design. It’s built to be lightweight, fast, and functional, capable of amplifying your performance no matter what game you’re playing. With 15 buttons and a best-in-class optical sensor, it seems like the Rival 500 would be up to the task, but let’s take a closer look and find out for sure.

The Rival 500 works hard to bridge the gap between MMO and eSports mice, and for the most part it succeeds, providing the best of both worlds in its intuitive design. But there’s still a question you’ll have to ask yourself to find out if this mouse is for you. Do you prefer a wide mouse, or a narrow mouse?

The additional buttons never feel like they’re in the way.

This is a very wide mouse. Your fingers rest comfortably within reach of all the Rival’s 15 buttons, but the body of the mouse will fill up your palm, and there isn’t a hollow on the right side of the mouse for your pinky to rest in.

Looking at the Logitech G403 Prodigy, or the Razer DeathAdder Elite, you can see the difference in overall body shape. The G403 and DeathAdder Elite are slender, and your thumb and pinky rest in contours on either side of the body. The Rival 500 has one contour for your thumb, flanked by buttons above and below, but your pinky and ring finger just drape over the right side of the mouse.

It’s a design that some users will love, and others will hate. If you generally prefer narrow mice, the Rival 500 is not for you. However, if you like a fuller mouse, something that fills your hand when you’re using it, the Rival’s design will be a pleasant surprise.

Feels worse than it looks

The soft-touch materials covering the Rival 500’s exterior feel chalky to the touch, but in use you don’t notice it too much. That said, the material has a bad habit of attracting smudges and oils. Even right out of the box, the powdery-feeling soft-touch material looks a little dirty, and it only gets worse with use.  Compared to the Razer DeathAdder Elite and Logitech G403, the Rival feels similar, but not quite as slick, and it’s a magnet for smudges. 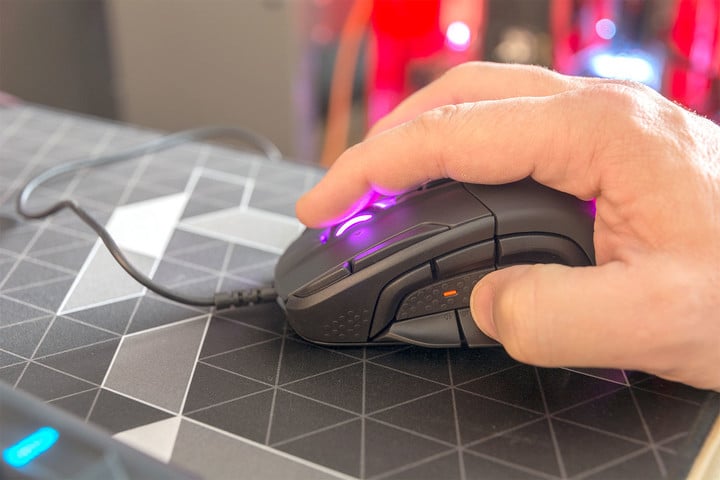 What would a gaming mouse be without lights? The Steelseries Rival 500 has built-in RGB lighting in two lighting zones — the logo on the back of the mouse, and the accent lighting on the scroll wheel. Both zones can be changed independently, or set to cycle a pattern of colors using the Steelseries Engine software.

More: Shut out the noise and shut in the sound with best noise-canceling headphones

The lights are surprisingly bright, almost too bright, as the internal lighting can leak out between the mouse buttons and be a little overbearing in a dark room. Compared to the Razer DeathAdder Elite, the Rival 500’s LED lighting is much brighter, if a bit less vibrant.

Button placement is a big deal for gaming mice, and all too often a good mouse is spoiled by poor placement of extraneous buttons. Thankfully, the button placement on the Rival 500 is superb. Just placing your hand on it, in a resting position, your fingers are only on the two main buttons, while all the others are within reach with minor adjustments.Hitting the six thumb-side buttons is easy and doesn’t require any major repositioning — just a little shift up, down, left, or right. Accidentally hitting buttons is actually pretty hard.

There’s one other feature that the Rival 500 has that, um, rivals, might not: haptic feedback. This mouse has built-in vibration functionality, and you can customize vibration pattern and delay. 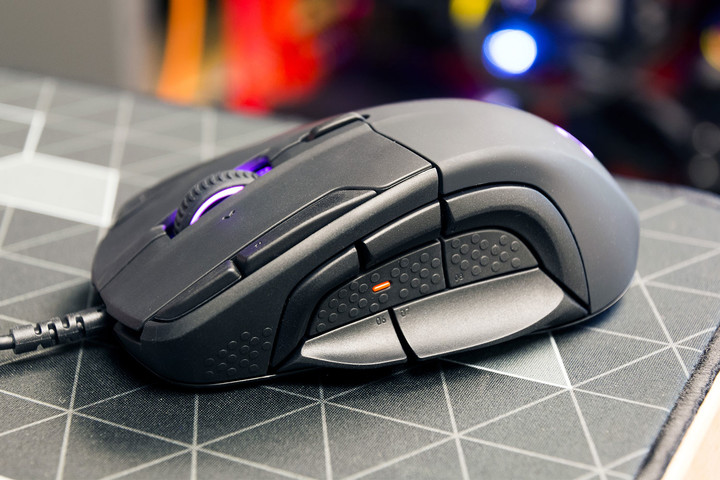 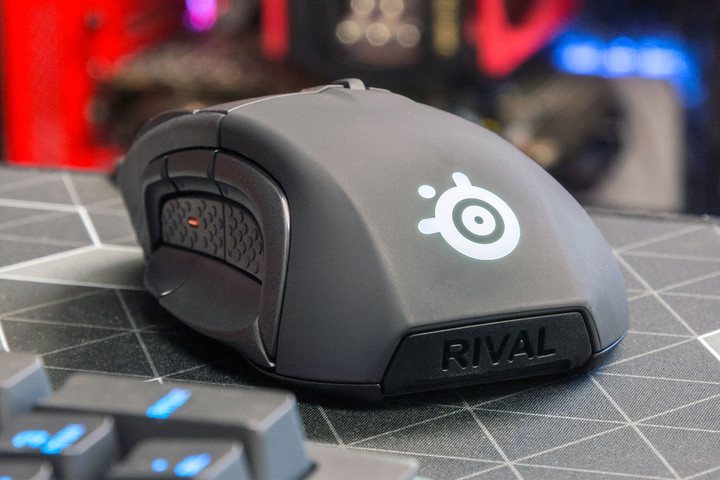 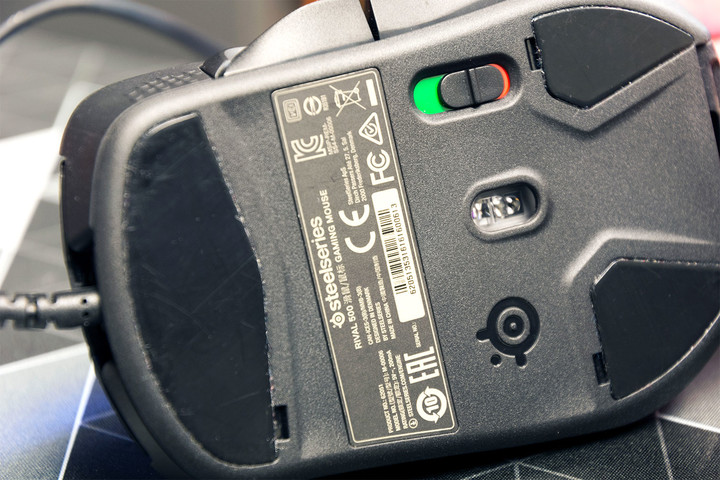 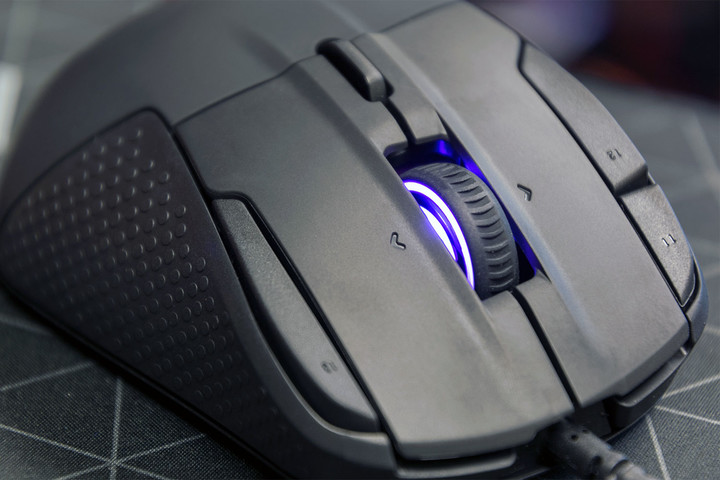 To be clear, it’s not typical gamepad-style vibration. You’re not going to feel the mouse buck every time you fire a gun in Overwatch. Instead, using the included Steelseries Engine software, you can set the vibration to fire every time one of your abilities goes off cooldown, by telling the software how long to wait after a certain trigger (like the press of a key) to fire the vibration.

It’s an interesting feature, and once you get it working it’s nice to have. But setting up the macros can take a bit of trial and error, and it’s more of an MMO feature than a MOBA or FPS feature. Using it in Heroes of the Storm or Overwatch, you’d have to set up different macros for different heroes, as everyone’s cooldowns are different.

Before we start discussing build quality, it’s important to point out that the Steelseries Rival 500 is an $80 mouse. That’s not a bad price point, but for that price you can afford to be a little picky about overall quality.

While the design is innovative, the build quality leaves much to be desired.

Unfortuantely, the Steelseries Rival 500 doesn’t feel like an $80 mouse. The body feels empty and hollow, the plastic on the side-buttons has a troubling amount of flex, and the soft-touch material feels almost chalky.

The quality of the cord isn’t what you’d expect at this price point, either. When straightening out the kinks which naturally occur in any wired mouse’s cord, the sheath starts to wrinkle, and sharp kinks cause the internal wires to flex.

By comparison, the Logitech G403 has a solid, if standard, cord. Its simple plastic sheath is thick and durable, comparable to a standard smartphone charging cord in thickness and weight. Looking at the Steelseries Rival 500’s cord, it’s similar to the kind of cord you’d find on a cheap pair of earbuds.

Steelseries manufactures a lot of different peripherals, and they all work well with its Steelseries Engine software. The Rival 500 is no exception. The attractive UI lays out the options and capabilities of the Rival 500 in simple, approachable terms, lighting options and macros are easily accessible.

The software functions well on Windows 10 and Mac OS, and if you sign in and save your profiles, your macros and custom lighting can follow you even if you from one device to another.

You can set up multiple profiles for each device, re-map every button, change the lighting, and change DPI settings all from within the Steelseries Engine software. It’s not as troublesome or finicky as the Razer Synapse platform can be, and it has a much more robust UI than you’ll typically find on Logitech’s offerings.

The Steelseries Rival 500 is covered by a one year warranty against manufacturer defects, which explicitly excludes coverage for damage caused by wear and tear.

The Steelseries Rival 500 is a decent gaming mouse with some interesting and unique features, but it’s not without a few faults. While the overall design is innovative and intuitive, the build quality leaves much to be desired, and the cord doesn’t inspire confidence.

As a dedicated wired mouse, the cord is of vital importance. Over its lifetime, it will be tugged on, creased, crushed — and we’re just not sure this cord would survive even half as long as the actual mouse would. It feels cheap, and even during early testing it started to display creases and fatigue.

The mouse itself feels solid, generally. The body doesn’t have much flex, banging it around on a desk doesn’t reveal any unusual rattling, but the side-fin buttons have a bit too much flex, and the soft-touch material coating the body is a magnet for oils.

Here’s the problem the Steelseries Rival 500 faces. The $80 gaming mouse market is fiercely competitive. Search Amazon for “gaming mouse,” set your price max at $80, and you’ll find dozens of competitors that would perform as well, or nearly as well, as the Rival 500.

The Razer Deathadder Elite offers similar functionality in a sleek and high-quality package, with a durable braided cord. The Logitech MX Master provides dozens of power-user options in an attractive, wireless, package. Cougar’s 550M is a solid all-rounder.

The Logitech G403 Prodigy offers better overall build quality with similar levels of functionality — though it doesn’t vibrate or have nearly as many buttons.

Only if you absolutely need a mouse with more than 10 buttons. The Steelseries Rival 500 features a superb button layout. Just be sure to invest in a good microfiber cloth to keep this thing clean, and treat the cord gingerly.

If you want a general gaming mouse, though, you’re better off with a competitor that offers more features, and better build quality, for the same price.

Read more from News
← Never get lost inside Lowe’s again thanks to the In-Store Navigation app
Color Switch: If this doesn’t entertain you, then nothing will (Review) →