BenQ’s new monitors should be good news for PC gamers and digital graphic artists looking for an affordable solution packed with lots of features.

BenQ America has expanded its E-series lineup of desktop monitors with the launch of the EX3200R and the EW2770QZ. The EX3200R is a 31.5-inch curved solution with a curvature of 1800R and a 144Hz refresh rate, while the EW2770QZ is a flat 27-inch panel packing a QHD resolution and an ultra-slim bezel. Both are available now for $450 in the United States.

For starters, below is a graphic provided by BenQ showing how a curvature of 1800R appears to the person seated in front of the EX3200R:

And here are the hardware details for both:

Notice the difference in panel types. IPS means In-Plane Switching, which is a type of panel technology that provides brilliant colors and wide viewing angles. Vertical Alignment technology, or VA, is essentially the next step down, but provides a better contrast ratio and response time than IPS. Thus, BenQ’s curved monitor would be better at PC gaming than the flat model, which would serve the graphic designer crowd best. 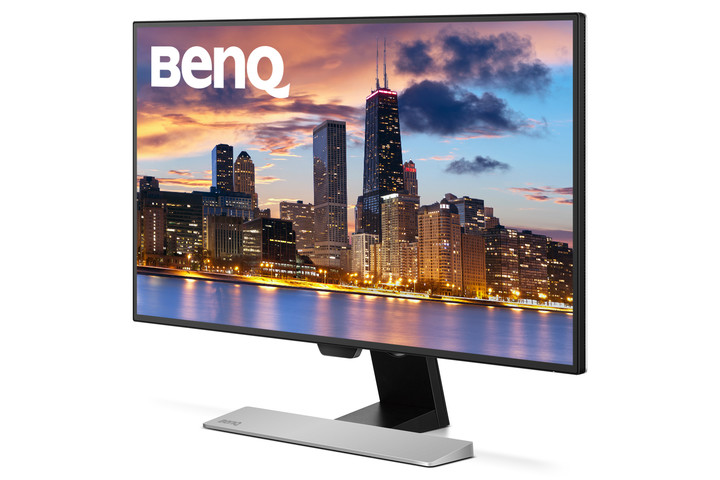 The curved EX3200R unit includes seven different preconfigured display modes including three for gaming, one for watching movies (Cinema), one for viewing photos, and two additional slots for users to create custom modes. The curved panel also supports AMD’s FreeSync technology, which should be good news for PC gamers looking for a new desktop monitor for their Radeon-branded graphics card.

More: BenQ’s new 27-inch and 28-inch monitors protect your eyes and your budget

Of course, BenQ is concerned about its customer’s eyes too. Both units include BenQ-specific technologies such as Low Blue Light and ZeroFlicker while the flat EW2770QZ packs Brightness Intelligence Plus technology. That means the display relies on an ambient light sensor to detect the surrounding ambient light levels and adjust the screen’s brightness accordingly. Both also have a Super Resolution feature that boosts the pixel density of video.

The EX3200R and the EW2770QZ can be purchased directly from BenQ or through participating retailers right now.

Read more from News
← Mevo, the live-streaming camera, is now Twitter compatible thanks to new API
Google adds shortcuts to app and mobile web to bring your interests to you faster →