Ethan Hawke shot most of his forthcoming biopic with DJI gear

Ethan Hawke’s forthcoming biopic, Blaze, sees the actor make the move from center stage to the director’s chair. The movie tells the story of the late country and western artist Blaze Foley, and is being filmed in almost entirely with DJI products. That doesn’t mean most of the movie is filmed from the air, though. DJI drones are part of the production, but the company’s non-flying camera gear, including the Osmo RAW and the Ronin DSLR stabilizer, were used extensively throughout the production. DJI was at SXSW in Austin to talk about its involvement in the film — all part of its DJI Creative Studio initiative.

Foley’s story is peppered with misfortune and tragedy. Most notably, his untimely death at just 40 years old, after a neighbor’s son shot him in the chest. Couple this with a period in his life known as “the missing years” and a musical influence that reaches luminaries such as Willie Nelson, and you essentially have a biopic that writes itself. Except, this one was written by Hawke and Blaze’s former sweetheart, Sybil Rosen. Hawke approached Rosen about the project after reading her own telling of Foley’s story in the book “Living in the Woods in a Tree.”

DJI’s involvement with the project came after Hawke had experienced some of their products, and thought they would be a good fit for the movie. Blaze‘s producer, Jake Seal, explains that Hawke “was very clear on certain aspects of the film being very fluid, and looking like water.” It’s a theme Hawke wanted to use to represent Foley’s “rolling stone” lifestyle, and something he felt was represented in the stabilized images that both the Inspire 1, and the Osmo RAW hand-held. Seal claims that the during the first two days of shooting, 80 percent was recorded on the Osmo alone.

Compared to Hawke’s movies as an actor, Blaze is a relatively small production. The lead role of Foley is played by newcomer Ben Dickey (a musician by trade), and fans of Netflix’s Arrested Development will spot Alia Shawkat as the female lead (Sybil Rosen). Rosen plays her own mother in the film. 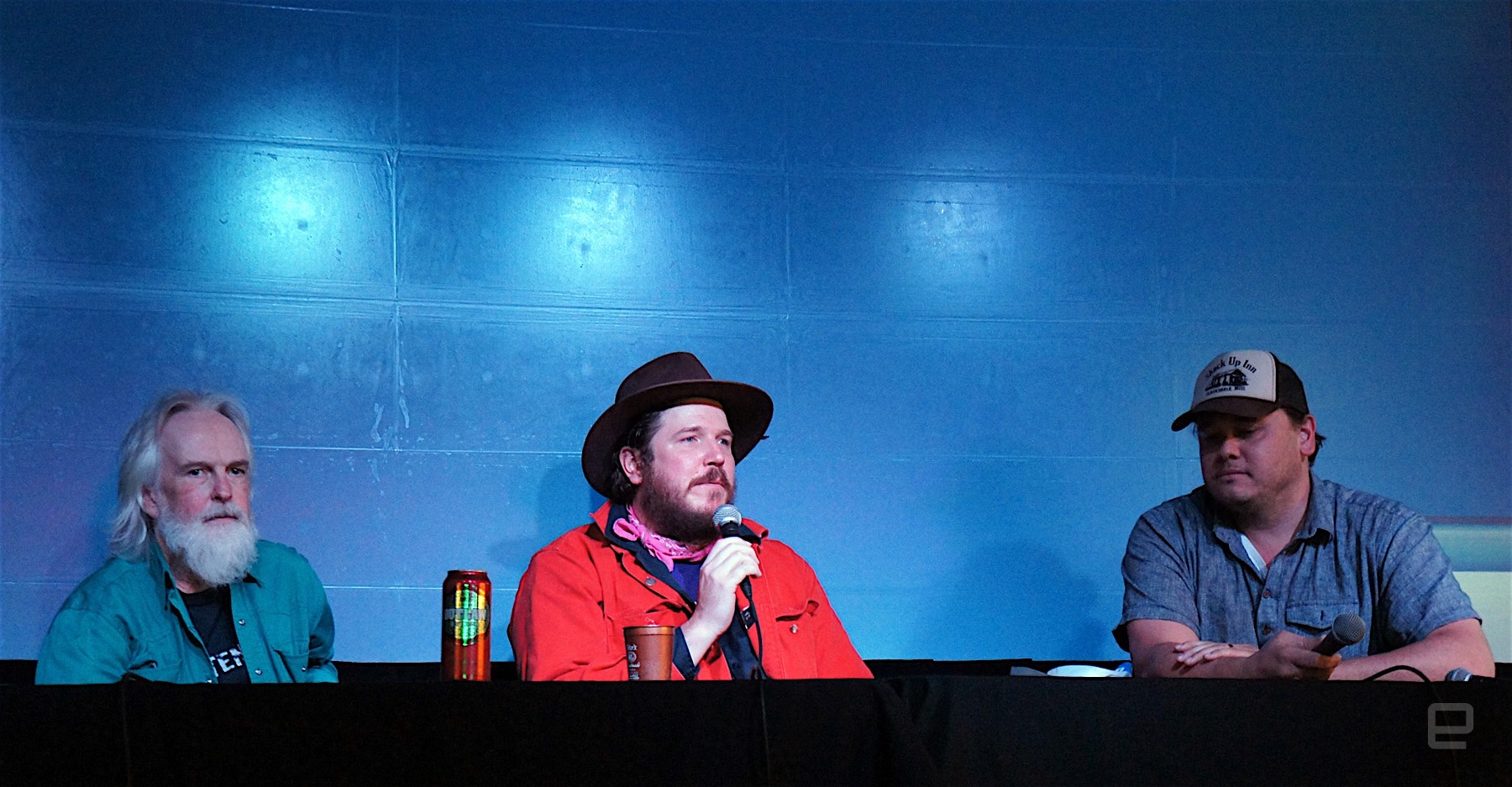 Despite Hawke’s enthusiasm for DJI’s products, the movie’s director of photography wasn’t initially so sure. “Steve [Cosens], the DoP needed convincing,” Dickey said. “At least a few hours.” But he, too had his doubts: “The first time we used it [the Osmo] it was really weird. I was like ‘is this really a movie?’”

Scott McLeslie, the film’s drone operator, was understandably more confident about what flying cameras and the Osmo could bring to the table. Not just as part of a smaller operation, but in their ability to do things that conventional Hollywood gear could not. “They opened possibilities that none of the cinematographers could dream of,” he said. McLeslie claims that shooting a close up in a moving car normally requires a rolling platform and half of the vehicle to be cut open. “With DJI tech you can just put it behind the wheel and have a never before seen scene.”

A DJI spokesperson says that, “We don’t have any sort of official relationship [with the production]. McLeslie is just an avid user of our products and was instrumental in helping Ethan and Director of Photography Steve Cosens use our products to get the shots they wanted.”

Of course, this isn’t the first time DJI has put its name to a movie. The company has been showing up at the Sundance Film Festival for the last few years trying to associate it’s products with serious movie makers. It’s also far from the only player in the game. Hardcore Henry was almost exclusively shot using GoPro cameras, and the ubiquitous action camera has shown up in The Martian as well as being the go-to guy for point-of-view and in-car/underwater shots since its launch.

Seal explained that there was a point when they were considering shooting the whole film with the Osmo (which is the same camera on the Inspire drone as the handheld). “In the end we didn’t quite have the bottle to jump in with that, but with the Ronin and the drones it was a game changer,” he said.

While it’s good to see even more movies coming out shot with gear that you or I can buy (or even, already own), there’s still some way to go before people shake off the perception that to shoot Hollywood quality, you need Hollywood budget. Especially, perhaps, when it comes to the actors and their egos: “The Osmo… it does look silly, don’t get me wrong, it’s great, but it does look silly,” Dickey joked during a panel at SXSW.

Blaze is currently slated for a 2018 release.

Click here to catch up on the latest news from SXSW 2017.