DropMix doesn’t fit the mold of a mobile game but it could open the door for more novel ideas on the platform.

Do you remember DJ Hero, the 2009 record-scratching game with a Guitar Hero style of play? It reviewed well enough to garner a sequel but sales for both games were underwhelming, likely because of music game fatigue. With the resurgence of Rock Band and Guitar Hero, Harmonix appears to be trying to capitalize on renewed interest with the unveiling of DropMix.

Harmonix partnered with Hasbro to create a game board featuring five spots for near-field communication-enabled playing cards. Each card plays a different part of a song such as vocals, guitar, or bass. When placed on the board, your mix plays through a connected app on iOS or Android. There is even a slot for your phone, but it can also be played on a tablet. All of your mixes can be saved to your device so that you can show off your mixing talents to friends and family.

There are ways to get competitive with DropMix, though. In Clash Mode, you can play one-on-one or two-on-two with friends. It’s unclear exactly how points are earned but a winner is decided when a team hits 21 points.

DropMix comes bundled with 60 cards and more than 300 cards are planned for the 2017 collection. Two types of card packs will be available separately. Playlist Packs include 16 cards for $15 and Discover Packs contain five cards for $5. 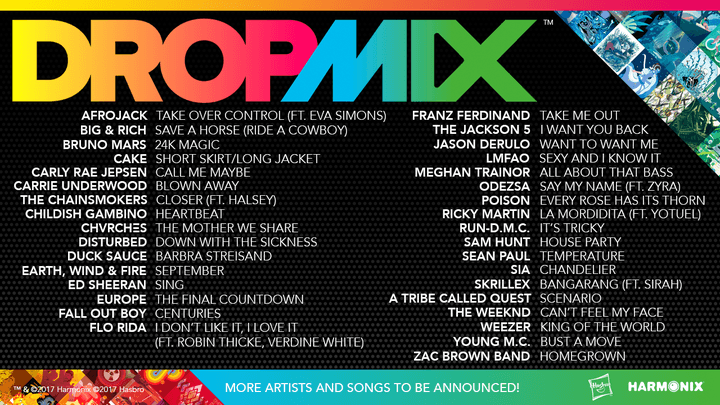 DropMix will probably be best served as a party game. However, it’s arriving during the downfall of the toys-to-life genre, so interest in the collectible aspect of the game is hard to gauge. It’s technically a mobile game and one with an expensive price of $100.