As legal weed sweeps the nation, startups are racing to make a breathalyzer for marijuana

As more states legalize marijuana, a demand for marijuana breathalyzers has prompted companies to develop new technologies. This can help to detect when a driver is impaired and poses a danger to others.

The days of rolling down the street smokin’ indo may come to a screeching halt when marijuana breathalyzers hit the market as soon as next year. Hound Labs and Cannabix Technologies are at least two of the companies that have plans to manufacture marijuana breathalyzers for law enforcement agencies and employers. Both have developed their own technology for the forthcoming marijuana-detection devices, mainly intended to identify impaired drivers.

Hound Labs uses chemistry, fluidics (the use of fluid flows or jets for functions usually performed by electronic devices), and engineering to measure small amounts of tetrahydrocannabinol (more commonly known as THC, the active ingredient in weed) in breath. THC is measured in picograms, or parts per trillion, Hound Labs Chief Marketing Officer Jenny Lynn said in an email to Digital Trends.

“In a relatively short period of time, we have been able to leverage our extensive team of scientists and engineers to translate Hound Labs’ breakthrough science into a working prototype that can be used effectively, at the roadside, while incorporating their proprietary technology that has been validated against mass spectrometry, the gold standard of laboratory measurements,” Joe Heanue, CEO and Co-Founder of Triple Ring Technologies, the high-tech engineering firm that has formed a strategic partnership with Hound Labs, Inc, stated in a press release. 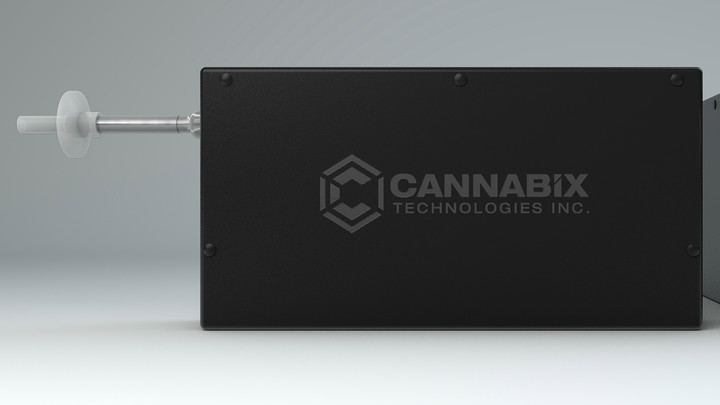 According to the Yost Research Group website, “FAIMS involves separation based on the inherent differences in an ion’s mobility in high and low electric fields, and can be performed at atmospheric pressure and room temperature.”

The current methods to detect THC test saliva, sweat, blood, or urine, but they cannot conclude whether someone used marijuana moments before driving down a freeway, or at a weekend party, or as a sleep aid two weeks ago.

“ … THC stays in body fluids for many days or even weeks,” said Lynn from Hound Labs. “Breath is the exception. THC can only be measured in breath for a couple of hours, then it disappears. This two-hour period aligns with the window of impairment identified by researchers.”

Cannabix Technologies stated in a press release that it is also navigating the two-hour window at the time of testing for optimal breathalyzer results. Its breathalyzer “consists of proprietary components, including a generator enabled by the latest chip technology to provide extremely fast high-voltage square wave transitions that significantly improve chemical separations, and a novel plasma ionization source that provides efficient ionization with a relatively small footprint.”

Hound Labs, based in Oakland, will produce The Hound marijuana breathalyzer at the end of 2017, according to Lynn. The forthcoming marijuana-detection apparatus from Cannabix Technologies, based in Vancouver, B.C., needs more testing. The company has a projected production timeline of 12 to 18 months from now.

“We [still] need to conduct scientific trials and get the device approved as a court certified device for use by law enforcement,” said Malhi from Cannabix Technologies. “As with any government approval, exact timing is unknown.”

Concerned marijuana consumers themselves will be able to check themselves before they wreck themselves behind the wheel or in the workplace, as Hound Labs also plans to provide breathalyzers for individual consumer use.